Clinging to memories as homes and shops disappear from old street 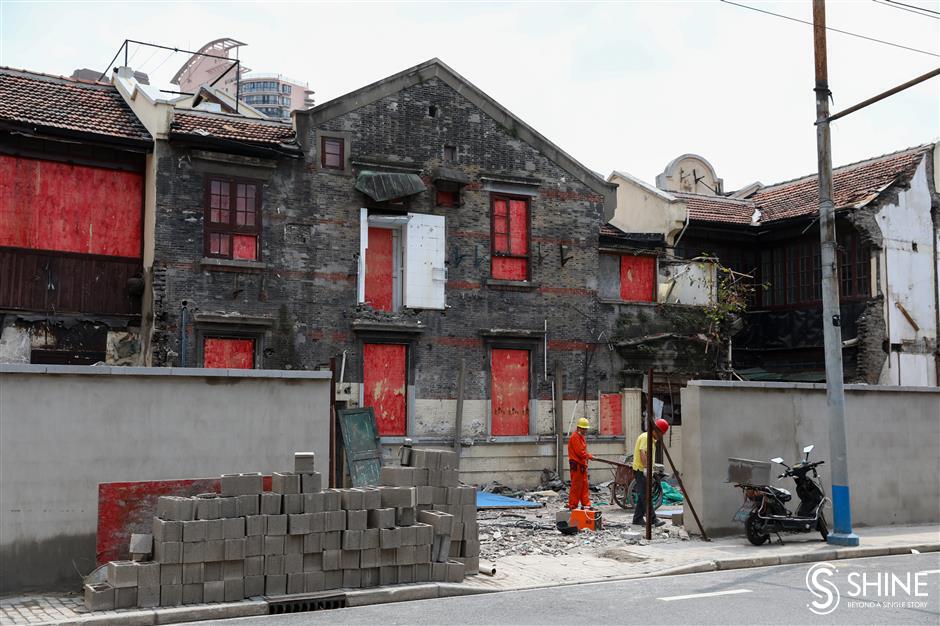 Farewell to Shunchang Road, an once bustling road holding many people's memories

Farewell to Shunchang Road. Farewell to an authentic slice of Shanghai life.

On a street redolent with the smell of seafood, the oil of fried dough sticks, makeshift lighting and colorful but simple shop signs, the last few small business owners are preparing to close their shops and leave the once bustling area.

A voice on a loudspeaker blares out: "Last day, final clearance." In this case, it's not a deceptive sales come-on.

Standing at the intersection of Shunchang and Hefei roads is like standing at the cusp of two different worlds. On one side, wealth and prosperity; on the other, an old lane crammed with shabby brick houses and street stalls and shops selling snacks, vegetables and meat, and even adult diapers.

Shunchang is a short 1.3 kilometers, but its history is long, stretching back a century. It was once called Rue de Marche, or Market Road, but changed its name in 1943.

The street once housed the Shanghai Academy of Fine Arts, the first institution of higher education for art in China. It was founded by Liu Haisu in 1912 on Zhapu Road, then moved to Shunchang Road in 1923. It was the earliest school to admit both male and female students, and a pioneer in using live nude models.

But now the road is succumbing to progress and urban redevelopment. Residents and shop owners are being moved out. Before the final curtain falls, I go to meet three people with deep roots here – people whose homes and shops are going to disappear but not their memories. Wang Xianguo, 90, once set up a stall every day at the entrance of the old neighborhood called Xiangshun Lane, just minutes from his home.

Finding him in an online article, I phoned Wang according to a number vaguely visible in the photos, only to discover that he moved to a new home in Minhang District two months ago.

"I feel bad because I have nothing to do," Wang said during the phone call. "I miss Shunchang Road very much, and I want to go back and have a look."

So we agree to meet on the road on a Tuesday. After nearly a two-hour trip from Minhang, he shows up on the street where he lived for four decades.

"Old Wang, you're back!" "Old tailor, you have lost weight." "Where are you living now?"

Wang is visibly overwhelmed by the enthusiastic welcome from the few old neighbors who haven't moved yet and haven't forgotten him.

"Ugh, it has been shut down," Wang tells them, referring to his tailoring stall.

He finds his old spot. It's semi-outdoors, next to the iron gate of an old neighborhood. Wang recalls that he had to wear a pair of fingerless gloves in winter in order to keep his hands warm.

Wang, a native of Ningbo in Zhejiang Province, took up Western-style suit making when he was 14. He moved to Shanghai at age 21 and worked as a tailor in the area of Yuyuan Garden, before moving to Shunchang Road.

"In the first four years, I focused on cutting fabric, and in the next eight years, I shifted to making clothes," says Wang. "As I grew older, I mainly did alterations."

It's hard to imagine, looking at the 8-square-meter space where he once worked, that he managed to equip it with a work table, two Butterfly-brand sewing machines, an edge-cutter sewing machine and an ironing machine. Today, the site is vacant, except for a few parked bicycles.

The wall that used to advertise Wang's mobile phone number and tell prospective customers "no WeChat, pay cash" has been covered over with a board promoting fire safety.

Before leaving, Wang borrows a permanent marker and a piece of paper from a shop nearby. He writes his phone number on the paper, signs it "old Wang tailor" and pins it to the wall.

"That's for my old neighbors and friends who might want to find me," says Wang. 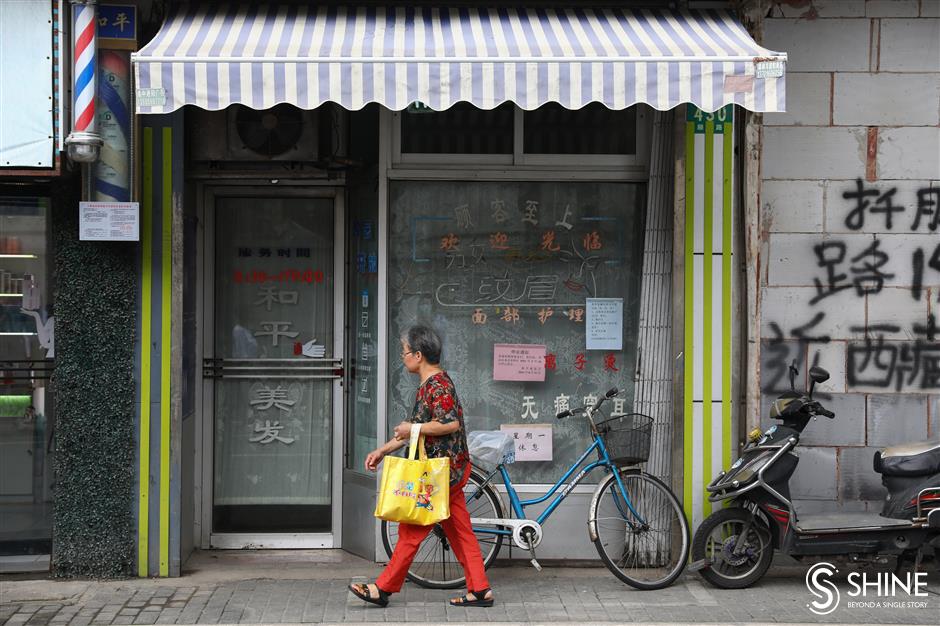 The Peace Hairdressing Salon, which was state-owned, is at least 70 years old. 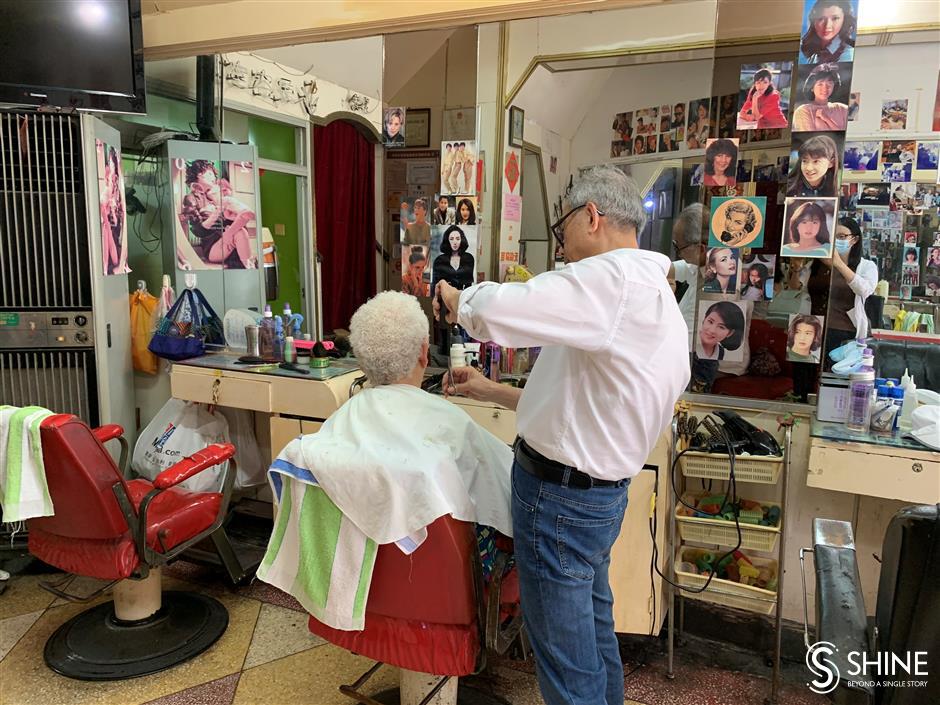 Wang Denglou, 69, cuts the hair of an elderly woman.

Wang Denglou, 69, stands alone in front of the Peace Hairdressing Salon, wearing a white shirt and a pair of black leather shoes. In a few days, he will be leaving the place where he worked as a hairdresser for decades.

"We were required to wear a white uniform back when we worked at the state-owned hairdressing salon, and we just never changed that," says Wang, whose white hair is slicked back.

He contracted to operate the Peace Hairdressing Salon in 1990. The salon, which was state-owned, is at least 70 years old. Before the founding of the People's Republic of China in 1949, it was called Peace Beauty Salon.

I phoned Wang before my visit, but he seemed to be reluctant to be interviewed.

"The salon is doomed to be shut down. What's the point of talking about it further?" he said on the phone.

But I persist and show up to try my luck. Unexpectedly, Wang receives me warmly and invites me inside for a look around. 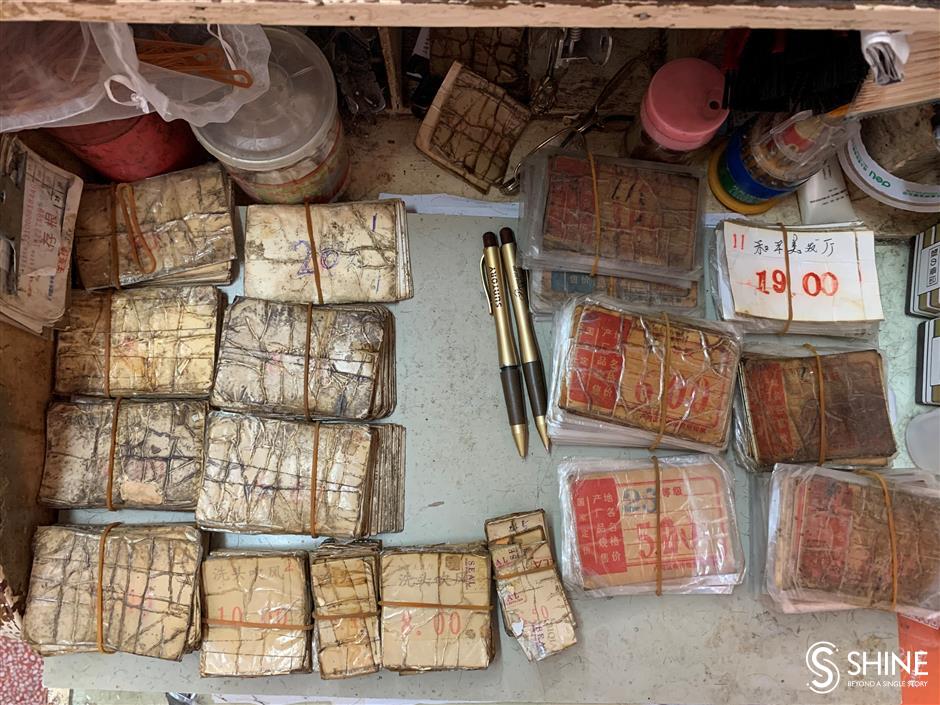 Old tickets issued by the salon show the selected services and their prices.

The interior is like taking a trip back in time. The salon is outfitted with old barber chairs, a wash basin, perm kits, hair dryers, an old-style telephone and an abacus to do the accounts.

Wang moved from Yangzhou in Jiangsu Province to Shanghai in 1978. One of his specialties is perming women's hair.

He tells me he always arrives at the salon at seven in the morning to start the boiler and steam vintage striped towels in a box. He makes sure the salon is all clean and tidy, ready for business when it opens at 8:30am.

"My colleagues and I are old, and we can't open a new hairdressing salon somewhere else," he says. "I guess it's time to retire." 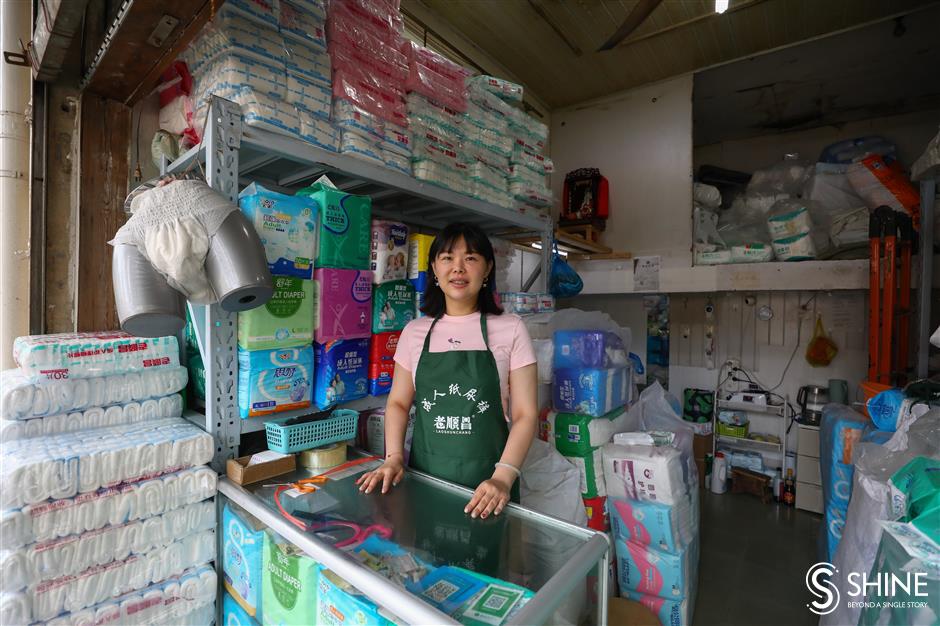 Xu Shiwen, 30, is the owner of a shop selling adult diapers.

Shunchang Road was known as the "street of adult diapers," with several shops specializing in the business located here. The legacy was left from an adult diaper wholesale market that used to be here.

Located at the intersection of Shunchang and Hefei roads, a shop called Laoshunchang appears to do the best business. It is run by a 30-year-old woman named Xu Shiwen, who inherited the business from her mother. Her family has been selling incontinence diapers for more than 20 years.

"Shops selling not only adult diapers but also mother and baby products appeared on the street as early as the 1990s," says Xu. "The heyday of the business was in the beginning of the 21st century, before e-commerce changed everything. There must have been some 30 of these shops at the time."

During my stay, three regular customers come to purchase diapers for family members. They don't need to specify what they need; the shop assistants know exactly what they want.

"Many of our customers have been coming here for years," says Xu. "I know a mother whose daughter is the same age as me. Unfortunately, her daughter suffers from cerebral palsy. From baby diapers to adult diapers, she has purchased products at our shop for more than 20 years."

Xu has developed her own Laoshunchang brand, which she named after the street. For Xu, selling diapers is more than just making a living. She wants to help people who suffer from incontinence.

For users who are mobile, Xu suggests pant diapers. For those of limited mobility, she recommends diapers with stretchy sides because they are more convenient for caregivers to change. For families of limited finances, Xu suggests napkin-like diapers, which cost less.

"I have to be responsible for my customers," says Xu. "Although this shop will shut down soon, our customers can still buy our products from our online shop or from our other store on Huangpi Road S."

Before parting, Xu escorts me along the street, pointing out various shops and recalling memories associated with each of them. 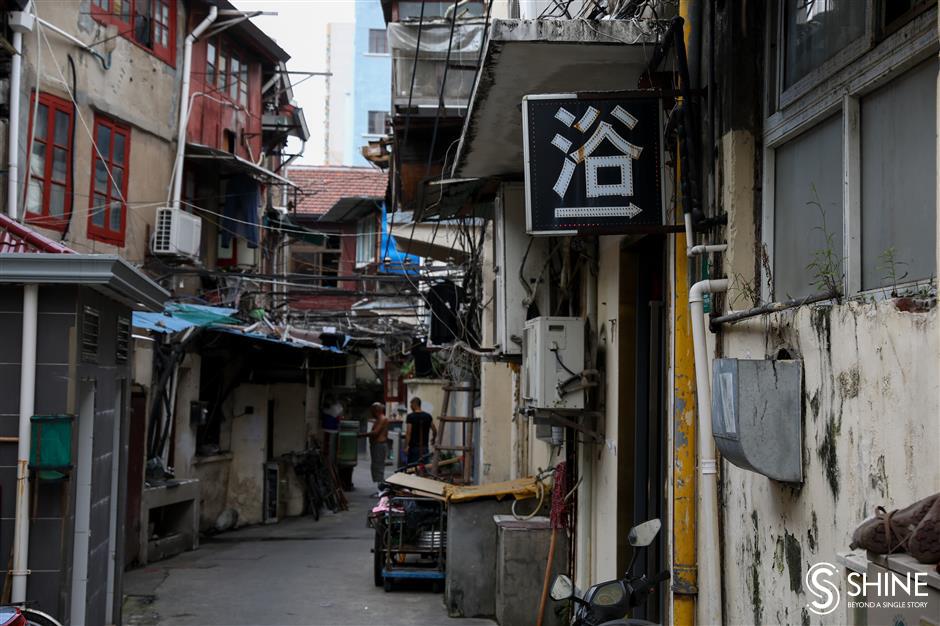 The old neighborhood is gradually emptying.

It's a sad swansong. Doors of shops that once sold the popular four Shanghai breakfasts, roasted seeds and nuts, fresh noodles and wonton wrappers are now bricked up.

I am left imagining how the street must have looked and sounded in its bustling past.

"I will miss the street because it holds so many memories," says Xu.