History of Christmas celebrations in city

With Christmas trees shining beautifully, Christmas markets crowded with people and Christmas songs continuously playing in shopping malls, the city is in a festive mood.

Although it's not a public holiday on the Chinese mainland, Christmas has become a major annual event in major cities like Shanghai. Influenced by Western culture, many local people have embraced the holiday spirit during Christmas since the 1980s.

With the launch of the reform and opening-up policy in 1978, China started to reconnect with the world, not only in the economic sector but also in the cultural sphere. 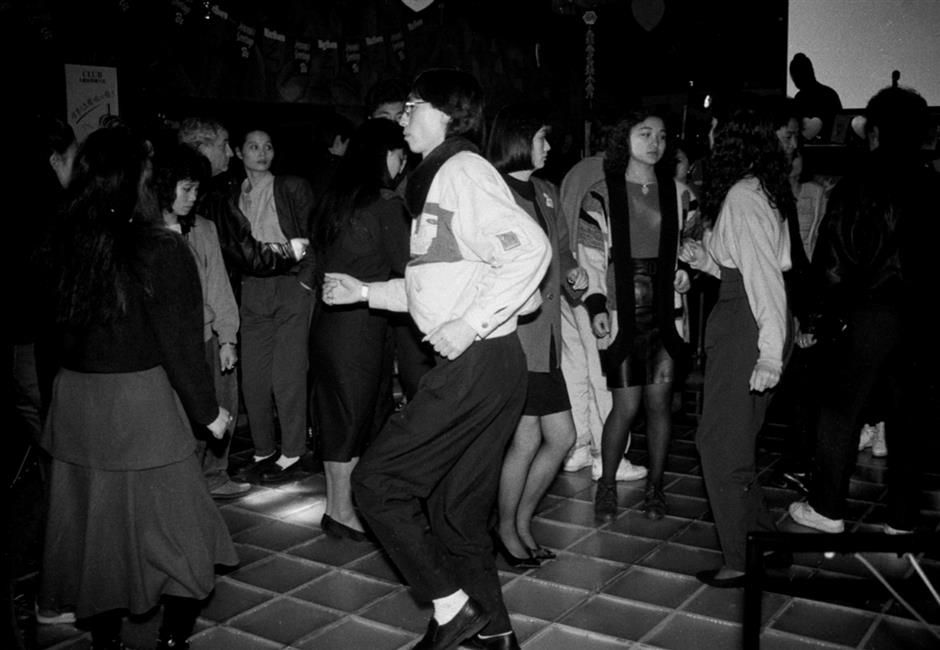 One way to celebrate the yuletide festival in the 1990s was to go to a dance party on Changle Road (today's Duoyun Books).

Since then, the country allowed foreigners to study in Chinese universities as self-funded students. According to photographer Wu Liqiang, the first group of self-funded foreign students arrived in Shanghai in the early 1980s.

During Christmas, they invited local friends to celebrate together. Without Christmas trees, local friends sneakily cut pine trees on city streets in the dead of night. To give the party a cozy atmosphere, they also bought white candles at 0.06 yuan each from small shops usually located at lane entrances.

With "illegal" Christmas trees and candles in hand, they visited the dormitories of foreign students, which were guarded by security personnel. Visitors were required to register their identities with a valid student or employee card, as the national ID cards didn't exist until 1984.

When entering their foreign friends' dorm rooms, locals often found they had already prepared Christmas treats sent by their parents in countries like Germany and France along with a loudspeaker.

In order to have more space to dance, they disassembled beds and danced to songs by famous pop groups such as ABBA and Wham! as well as those from "Hollywood East Star Trax," one of the earliest disco compilation series released in China.

However, the happy times did not last late into the night. Schools required all visitors to leave dorms before 10:30pm. When the time came, dorm managers would use handheld loudspeakers to yell: "See visitors out..." If visitors didn't leave, the managers would come to rooms and make them do so.

In the 1980s, a few luxury hotels that were allowed to accommodate foreigners were established in Shanghai, including Shanghai Hotel and Hilton Hotel in Jing'an District and Huating Hotel in Xuhui District.

To create a feeling of coziness and warmth for their guests, hotels were decorated with lights and trees around Christmas. Some also offered Christmas feasts, which, however, only the rich could afford.

There were many ways to celebrate the yuletide festival. Many local universities held Christmas parties in their canteens with an admission price of 3 yuan. There was no alcohol, but students could buy a bottle of orange juice for 0.6 yuan.

Students from different universities went to each other's schools. According to Wu, the two most popular schools were Fudan University and Shanghai International Studies University as there were more female students.

The parties mainly centered around dancing. With waltzes in the first half and disco in the second, the music added a positive vibe to the parties, and many students exchanged gift cards while there.

In early December, business at local stationery stores ramped up. Wu said some students purchased gift cards early – the prices rose in the run-up to Christmas.

In the 1990s, an array of shopping malls jointly invested in by local and overseas companies opened, which would be filled with holiday spirit during Christmas.

Wu still remembers a huge copy of the Eiffel Tower decorated with stunning lights that was built in front of the Printemps Department Store at the junction of Shaanxi Road S. and Huaihai Road M. during a holiday season in the 1990s.

With increasing foreign investment in the city, more and more foreign goods appeared in the Chinese market.

KFC, for example, opened its first store in Shanghai in 1989, located on the first floor of Dongfeng Hotel at No. 2 on the Bund. Home to today's Waldorf-Astoria Shanghai, the building started out as the Shanghai Club, a British gentlemen's club back in 1861, and became Dongfeng Hotel in 1971.

The fried chicken restaurant was a hit from day one, with long lines often forming. Different from what we now think of KFC – a fast-food restaurant – it was a luxury experience to have a meal there decades ago. Wu recalled a set meal cost 26 yuan when the monthly salary of a normal worker was 100 yuan. 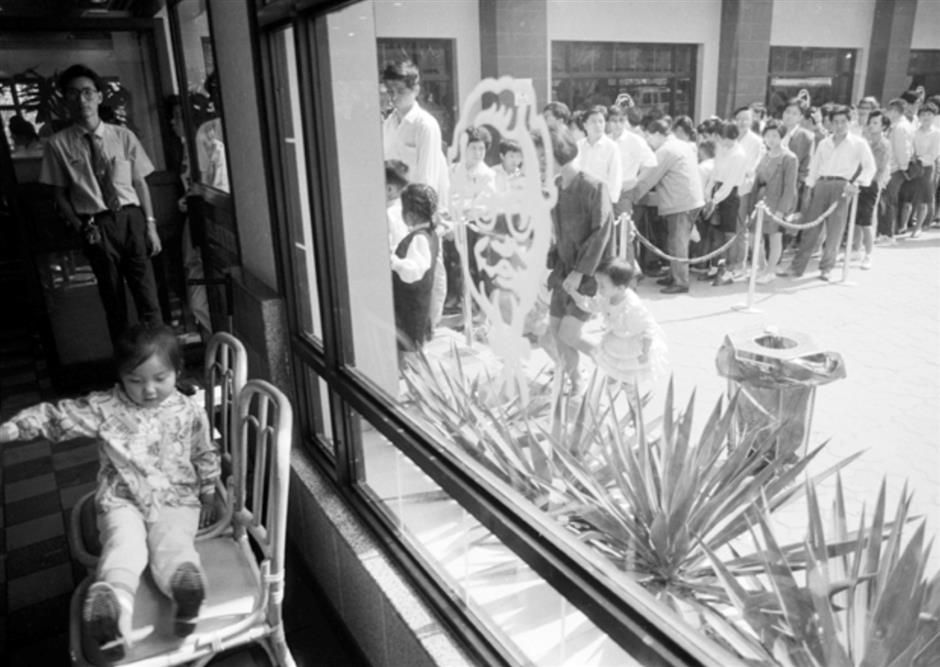 People queue outside the first KFC outlet in Shanghai at Dongfeng Hotel on the Bund in the 1990s.

Other foreign goods included coffee imported from the United States. It was sold at The Central Department Store, near the Bund as early as 40 years ago.

Color televisions made in Japan were also popular back then. Television, beyond a home appliance, was one of the essentials for marriage in the 1980s and 90s. Placed in sitting rooms, televisions served as a symbolic tool for local families. Normal families bought 21-inch domestically made televisions, but the wealthy had Japanese brands.

According to Wu, several shops were opened near Jinjiang Hotel to make it convenient for foreigners to buy daily necessities. The shops required foreign exchange certificates (FEC), which were the only accepted means of payment in China for overseas people from 1980 until 1995.

Wu recalled that a woman surnamed Zhang who worked for a foreign venture visited the shops with her Hong Kong boss. She spent 6 yuan (FEC) buying sanitary napkins for the first time in her life. After using a pad, she was amazed at how comfortable it was.

With the city's rapid development, local people's quality of life has greatly improved.

Regardless of how the outside world changes, family love and companionship are eternal. Take this season to get away from your busy life and enjoy time with your family.