'Hot' Shanghai aunties, defying age and misunderstanding, live it up on old street

The iconic Shanghai aunties, wearing qipao and posing with silk scarfs, show up in tourist attractions. Their pictures and videos are posted on Douyin, Xiaohongshu and other social media sites and some of them have a large number of followers. 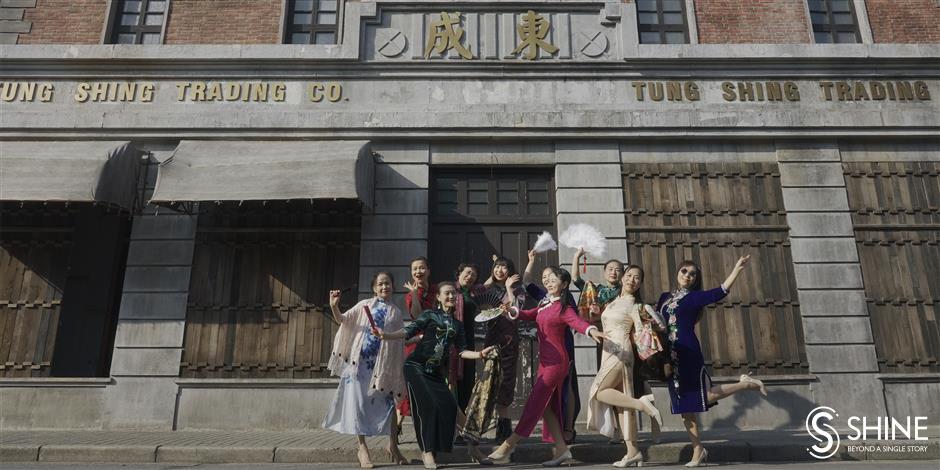 They know the city better and always check out the new attractions. Their videos of Taikoo Li Qiantan and Jiangyin Street have gone viral recently on social media.

Zhao Zhihui, a 72-year-old retired kindergarten teacher, leads one of the Shanghai aunties dancing groups. They have created a series of videos at different city landmarks.

The photos she and her dancing partners took on Jiangyin Street have received a lot of "likes" and inspired a lot of young people to visit the location.

The short and narrow street, located in a century-old community near the landmark Yuyuan Garden in downtown Huangpu District, has been planned for a demolition, and residents already have been relocated.

Last month, the street was transformed into an old Shanghai scene for a new film, "The Unknown." Starring Tony Leung and Wang Yibo and set in Shanghai from 1937 to 1945, it is centered on a group of underground members of the Communist Party of China who risk their lives to send confidential messages to protect the country. Most of the movie scenes were shot in Shanghai.

Consequently, the street became a hot attraction for the aunties to shoot photos and videos. They flocked to the 50-meter street dressed in 1930s-style outfits and with vintage props. They brought old Shanghai posters for decoration and waited in line for over 30 minutes to snap a photo for their social media feeds.

I joined Zhao's group for a filming event on December 22, following them to create a 15-second short dancing video on Jiangyin Street.

The group's choreographer is Zhao Huiqin, 57, who started to learn dancing after she retired. She has uploaded hundreds of short videos on Douyin, most of them featuring dancing in front of a Shanghai landmark and already amassing thousands of followers.

She created a 15-second short dance for the street, and taught me how to perform with the group. It was a Shanghai-style fan dance tracing back to the 1930s and involved wearing qipao, holding a folding fan and dancing to the background music "Nightlife of Shanghai." It was a short journey back through time.

"When I was young, I dreamed of being a dancer. So after retiring, I attended our community's dancing classes," Zhao Huiqin said.

She gets more joy from creating the short dance videos with her friends than posting them. But she also feels fulfilled after getting the online "likes" and compliments. "I've got a lot of comments saying I don't look my age and they've encouraged me to update my posts," she said.

Although many netizens have shown misunderstandings, the Shanghai aunties never fear negative comments.

"Sometimes when we dress up for a performance, someone passing by will say our makeup is too heavy," Fan Dongyun, a 66-year-old auntie, said.

"But we don't care what they say. I believe it's a lifestyle retired workers should live and we enjoy it," said Fan, a Shanghai Water Supply Company's financial staff member before she retired.

"At our age, we just do the things we like. We take positive pictures and videos, nothing out of place," Zhao Huiqin added.

Cao Yanhua, 56, an employee of Shanghai Worker's Cultural Palace before she retired, agrees.

"I think their perception is wrong. You can do what you like at any age and it should be encouraged."

Participating in cultural events, dancing and checking out new landmarks are part of the new lifestyle for Shanghai auntie groups, just the same, in a way, as the millennials.

They buy their dresses on Taobao, share makeup tips in their WeChat group, post moments on social media and even have a dress code for each event.

The aunties are good at getting their life and interests in order and are different from younger generations by caring more about their families.

"We don't go out every day, ensuring that we have time for our chores and taking care of grandchildren. When we have a group activity, I prepare dinner in advance so that when our activity is finished, I can dine together with my family," Zhao Zhihui said.

Zhao Yun, a 56-year-old retired teacher, said she got strong support from her daughter. "She always gives me advice on makeup and brings me a lot of cosmetics."

The group activities don't cost much but bring a lot of fun to the aunties' retired life.

"Our clothes are all affordable, around 100 yuan (US$15.70) for each item. We also share clothes with friends to save money. Dressing up and taking pictures makes us feel happy and young," said Zhao Huiqin.

Zhao Yun even told me she sewed furry ruffles on her qipao to make it look better.

The group also has won accolades as a result of participating in competitions.

"What impressed me most was performing at the Shanghai Great World entertainment center," said Zhao Zhihui.

"I always watched shows there in my childhood, and dreamed of performing on stage. I never expected the dream would come true in my 70s, as well as winning second prize in the Shanghai Citizens' Cultural Festival," Zhao said.

"The government gave us the stage and free classes on different kinds of dance, organized by the subdistrict committees," Fan Dongyun said. "We practiced for months to prepare a performance."

Enjoying life is what the Shanghai aunties want to share with younger generations through their photos and videos.

It's an amazing group and ultimately we could become one of them. 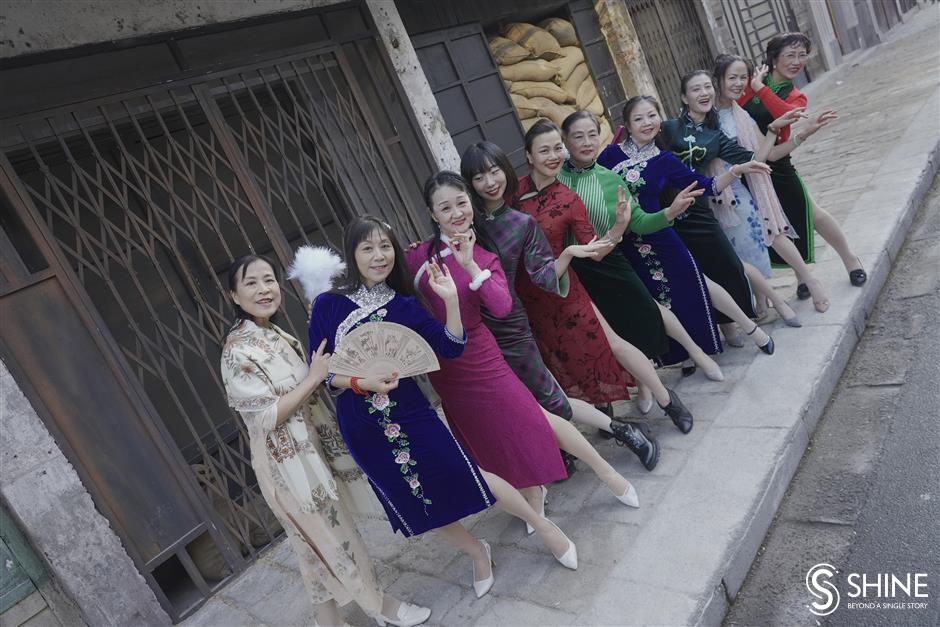