Tired of your job but wary about moonlighting? The slash makes a splash 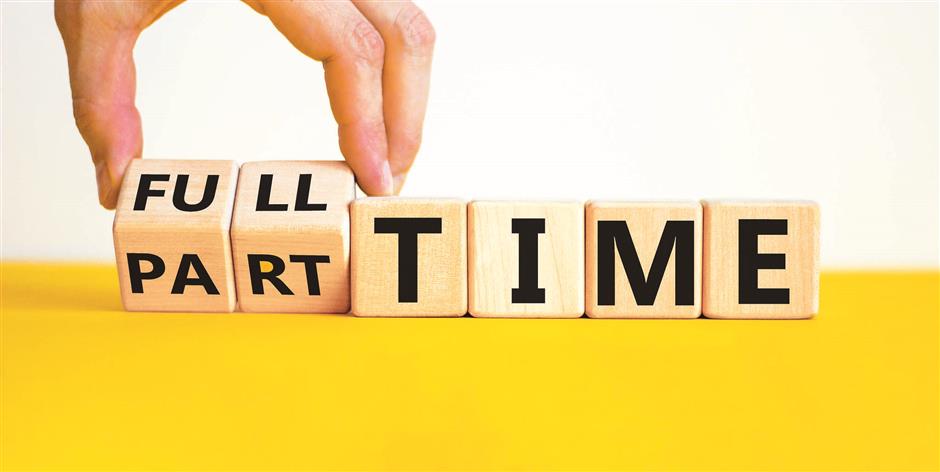 Aspiring actors are often advised not to give up their day jobs. The same might be said for anyone tired of their current work but nervous about taking the plunge into a new vocation.

Welcome to the world of the slash. An increasing number of people are solving their employment crises by doing day jobs/part-time second jobs.

Liang Piaoling, 36, is one such "slash employee." She felt stuck in her job as a marketing specialist for an auto company. It was hard to get a promotion and even harder to find a better job in the two years since the advent of COVID-19.

In the midst of her anxiety, she saw an advertisement on the social platform Weibo looking for a photo retoucher to upgrade old pictures. The commission fee was open to negotiation.

"I'm quite good at using picture-retouching tools, which I learned by myself, so I decided to give it a try," she said. "Before that, it never occurred to me to start a new career, despite the fact that I had more spare time than now two years ago."

Liang texted the Weibo recruiter and offered to retouch photos for a fee of 20 yuan (US$3.10) per picture. She subsequently earned 180 yuan in just one evening's work.

"It wasn't much, but it showed me that I could use my leisure time to advantage to develop a second career that could be the way out for me," she said.

More than 80 million people in China have part-time second jobs, according to the Economic Daily, run by the State Council, China's Cabinet.

The "slash economy" embraces a wide array of jobs, including writing, translating, delivery and mobility services. It is also spawning more specialized niche work, such as the photo retouching Liang.

Xianyu, a major platform where freelancers go to communicate, said in a report last year that jobs increased 54 percent from 2020 and revealed, perhaps surprisingly, that the most popular second job was matchmaking for pet breeding.

Elisia Chen and her husband run an online pet matchmaking platform in their spare time. Based on WeChat, the couple organizes weekend events for pets in Nanjing, capital of east China's Jiangsu Province.

As spring approaches, they look forward to their busiest time of the year.

"It started when we were looking for a cat to breed with our own pet," said Chen. "It wasn't that easy because most owners today neuter their pets. But we didn't want to go to professional breeders."

The couple realized that other pet owners shared their dilemma. Hence, the startup of their new, part-time career.

"It has been actually harder than we expected," Chen said. "We thought that animals breed more out of instinct rather than feelings, but how wrong we were! We found many pets suffered from unrequited love, and owners often broke up loving couples. It's the same, if not more complicated, as human matchmaking."

Chen said she and her husband were happy to develop what started as a hobby into a second career, which was better than seeking part-time jobs they didn't really relish.

Is it ethical to embark on a second job while still fully employed in a principal source of income? That is the focus of some debate.

Last year, a former employee of e-commerce giant Pinduoduo accused his company of maintaining a bad work environment and banning moonlighting in a second job.

"A colleague of mine was fired for just opening an online shop on WeChat," the ex-employee wrote on his blog under the screenname LeadroyaL.

The issue does cause some anxiety among people who feel guilty about putting second jobs ahead of their main ones.

David He, a 30-year-old programmer, said he once engaged in an outside part-time project that nearly lost him his principal job.

"It was two years ago, when the epidemic just broke out, and we were required to work from home," he recalled.

"I took on two part-time projects and thought that I could manage them well if I just worked extra every day. But when my then manager suddenly moved up one of my deadlines a week ahead of schedule, I was like struck by lightning."

The result: He rushed the work out and made some big mistakes. That led to an eventual company fine and the cancelation of his year-end bonus.

Wang Ping, an experienced headhunter, said workers need to read their employment contracts carefully to see if moonlighting is allowed.

"Many companies don't allow employees to work for other employers, full-time or part-time," he said. "And according to China's Labor Contract Law, employers have the right to fire those who violate the rules."

He added: "If you want to be a 'slash employee,' you need to evaluate if what you gain matches the energy you put in. Of course, if you really like your second job so much, you could always quit your main job."