In hanfu costume, soaking up culture in the city's traditional lantern fair

The best way to celebrate the coming Lantern Festival in Shanghai could be to dress up in traditional clothing, wander through the annual lantern show and explore the temple fair of the 140-year-old City God's Temple.

I invited my colleague, Alexander Bushroe, who is from the United States and has lived in China for over 12 years, to join the lantern gala in a traditional way with me.

Featuring various artistic depictions of the big cat to mark the Year of the Tiger, hundreds of colorful lanterns have been lit and hung across the Ming (1368-1644) and Qing Dynasty (1644-1911)-style buildings at Yuyuan Garden Mall.

Yuyuan Garden has become the hottest attraction in Shanghai these days as people rush to appreciate those attractive tiger lanterns. 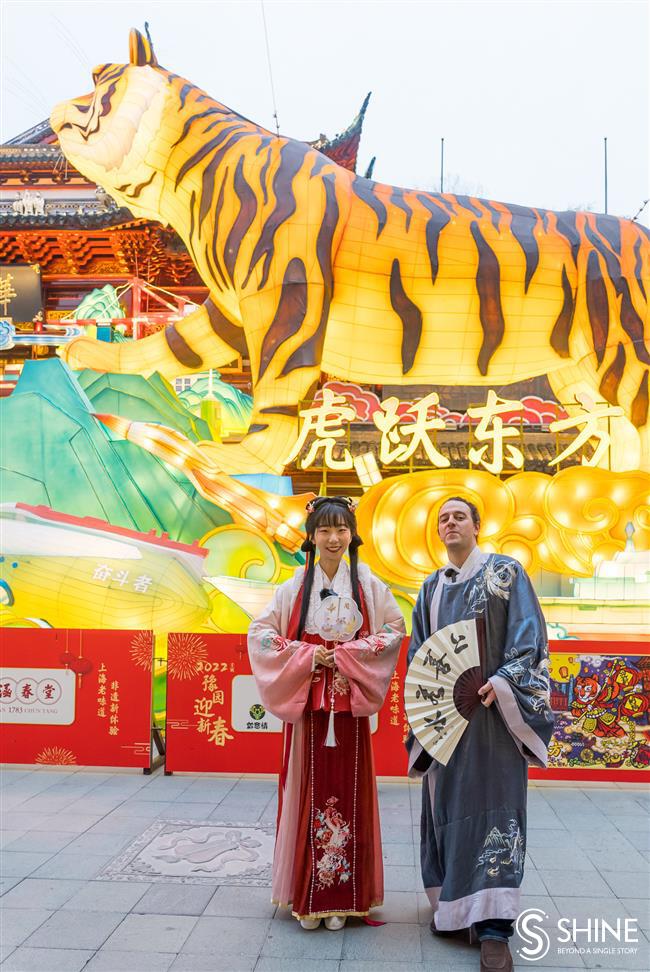 It's fun to dress up and explore the lantern fair to celebrate the upcoming Lantern Festival, which falls on February 15 this year.

First up, you can't miss the largest lantern at Yuyuan Garden Mall featuring a 9-meter-tall golden tiger standing on a mountain. Located in the mall's central plaza and accompanied by a group of small tigers who are dressed like astronauts, Winter Olympic athletes or aircraft carrier commanders, the huge tiger lantern has attracted a large number of locals and tourists wanting to get a snap.

In the evening, a small "tiger" will show up around his huge friend and enact a cute performance.

In addition to a large number of tiger lanterns, there are also some traditional lanterns featuring flowers and New Year paintings, conveying New Year wishes to visitors, such as "healthy," "happy" and "wealthy." 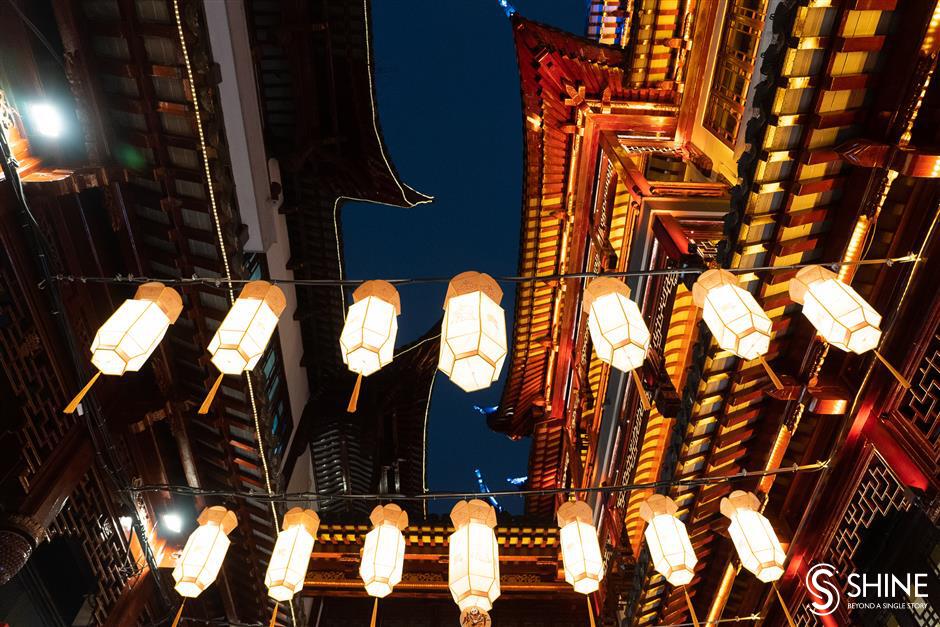 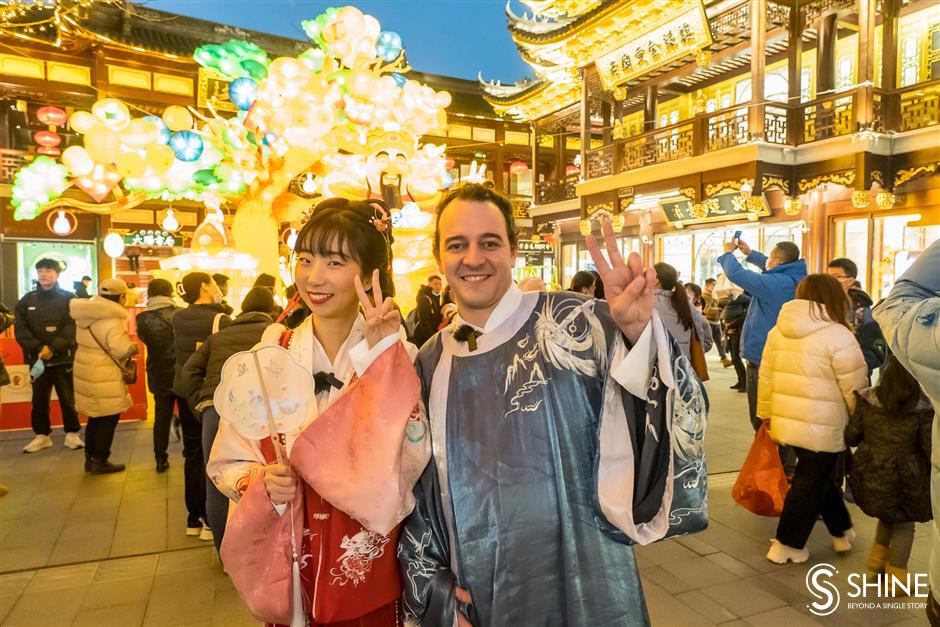 Fiona Li and Alexander Bushroe pose with the lantern of the God of Wealth and offer the same gesture of "yeah."

Another major attraction set up at the iconic Zigzag Bridge features flower lanterns for the 24 solar terms and traditional Chinese culture. In ancient China, girls would decorate their hanfu (the traditional dress of Han Chinese people) with seasonal blooming flowers for every solar term.

A must for locals is to find the lantern of the God of Wealth. This year he is standing under a "money tree" and gesturing with a "yeah." Taking a photo with him may bring you wealth for the whole year.

I also found some interesting rainbow-like lights displaying auspicious phrases of the Shanghai dialect, such as hong bao mo lao lao (getting a lot of red envelopes.) 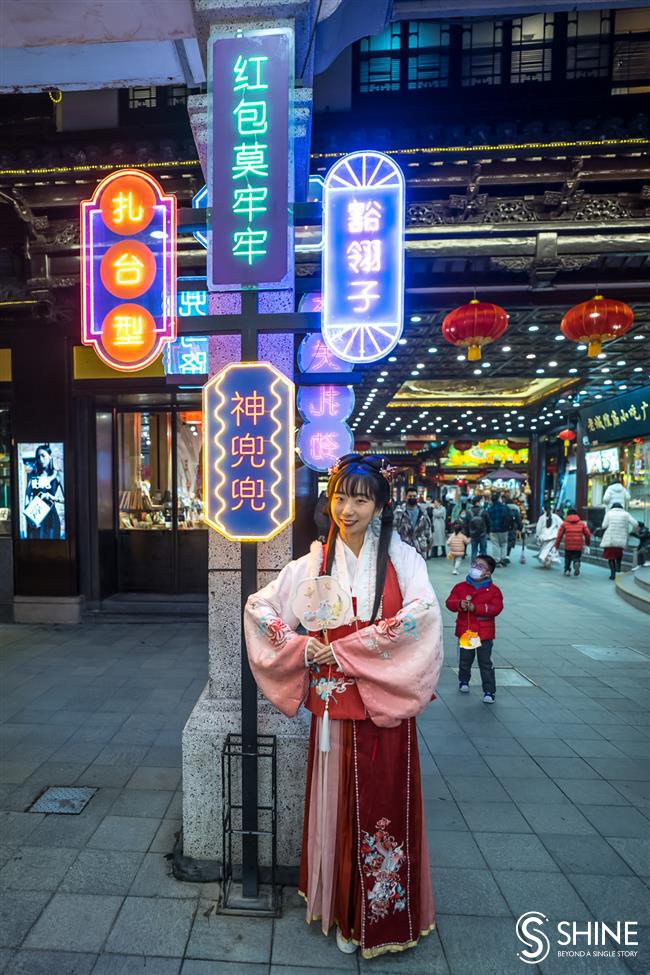 Just follow the crowd to see the lanterns? Well, things would be different if you wear hanfu.

Tourists were excited to talk and invite us, my foreign colleague in particular, to take photos with them, sharing the immersive experience of a traditional Chinese lantern fair in their social media.

Just a tip: We rented our hanfu from a store near Tian Zi Fang which also provides a styling service. You can reserve the rental service on dianping.com by searching the store's name "Han Yi Hua Shang" 汉仪华裳.

Hundreds of snacks are offered at the lantern fair, but at least you should try the famous xiaolongbao (little steamed buns) and something typical and special for your new year trip, such as ligaotang (Shanghai pear syrup candy) and spiced beans.

The Nanxiang Steamed Bun Restaurant has over a century of history, and tourists and locals alike flock here to sample the traditional Shanghai specialty food of xiaolongbao.

The filling is pure Nanxiang-style, which means minimally seasoned (no ginger or spring onion) and the broth is pure.

Get some Zhenjiang rice vinegar from the large bottle in the shop, drink the broth first (be careful, it is quite hot), then enjoy the whole bun. Be careful not to spill the broth if you wear hanfu. 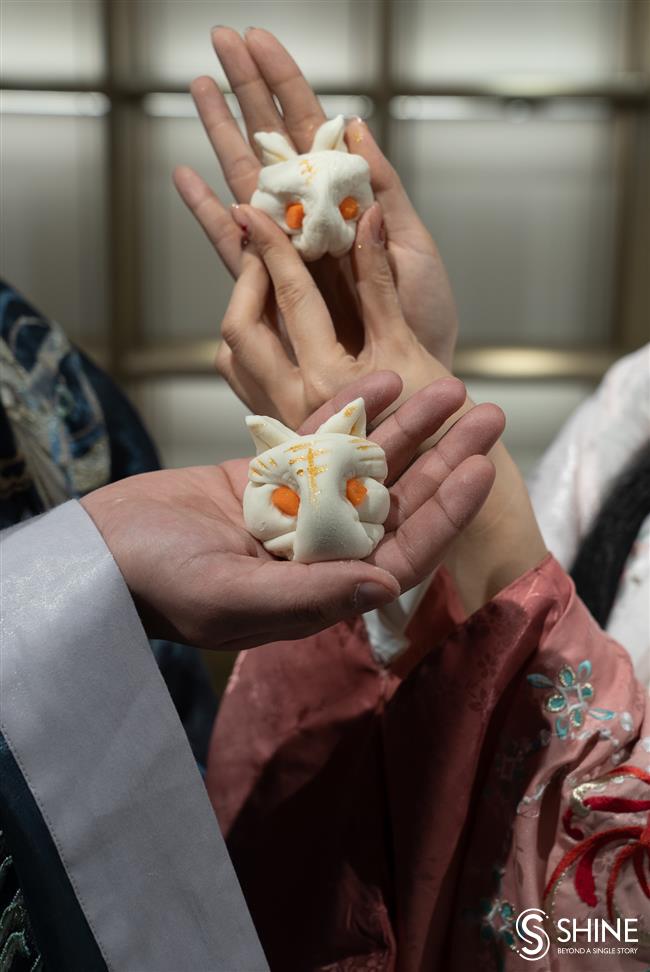 Besides the traditional Nanxiang buns, it's time to get some limited "tiger head" buns. They will bring you good luck for the Year of the Tiger.

With a sweet taste, ligaotang has pear and Chinese herbal medicine as its main ingredients and can relieve coughing and asthma.

In the time-honored Shanghai Pear Syrup Candy Store, there are different flavored items such as classic mint and liquorice, as well as creative new flavors like magnolia or matcha.

The store also launched a Lunar New Year limited edition – Shanghai Pear Syrup lollipop in the shape of cartoon character Qiaohu to celebrate the Year of the Tiger.

But Alexander said it tastes like traditional Chinese medicine more than candy, and he preferred the pear syrup herbal drink ligaolu, a soft drink inspired by ligaotang.

Compared to ligaotang, the spiced beans are more acceptable for tourists.

There is a well-known saying in Shanghai, "a man who does not eat spiced beans at City God's Temple has not truly been to Shanghai."

Tasting soft and hard as well as salty and sweet, it's also a traditional Spring Festival snack for Shanghai families.

Alexander said wuxiangdou was his favorite: "It's a little spicy and full of wonderful spices, tastes delicious and special."