Having a zzzzz problem? Your smartphone can be a sleep killer

Maple Shi, a white-collar worker in Shanghai, first realized she might not be getting enough sleep after reading the "Healthy Sleep Survey of China 2022," which concluded that only 35 percent of people in the country get enough sleep, pegged at an ideal eight hours a night.

"I usually sleep for about six hours a night, and I feel generally okay the next morning," she said. "So I didn't really pay much attention to the issue, but apparently I'm sleep-deprived."

The survey, carried out by Chinese Sleep Research Society, was released on March 18 to coincide with World Sleep Day.

It covered more than 9,000 people around the country – 58 percent of them women; 42 percent men. Three quarters of respondents complained about sleeping problems, including insomnia and poor sleep quality.

Nearly 30 percent of the interviewees, like Shi, were between 19 and 25 years old. Among them, 44 percent said they go to bed after midnight, and 30 percent said it takes them at least half an hour to fall asleep.

Shi graduated from university last year and went to work as a copywriter. While still on campus, she said she typically went to bed before the 11:30pm curfew and got up around 7:30am.

Now out in the work world, she gets up at the same time but goes to bed around 1am.

"It feels like my personal time has been severely reduced since graduation," Shi said. "I leave the office at 6:30pm if no overtime is needed and get home 40 minutes later. And if I go to bed too early, I would feel that I wasn't doing anything but work."

The survey showed that Chinese people sleep on average 6.9 hours per night, about an hour less than 10 years ago. City residents sleep generally less than those living in the countryside, and people in 30 second-tier cities, such as Hefei and Lanzhou, sleep the least. 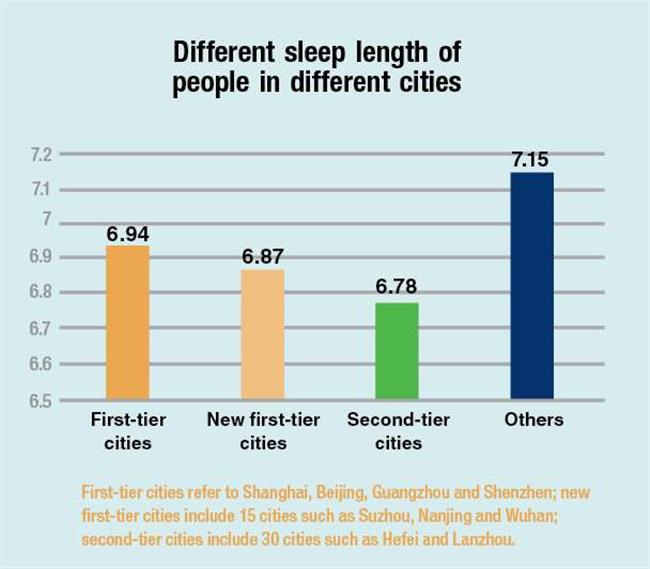 What's causing less sleep? A closer look at the survey results points the finger at smartphones.

Nearly 90 percent of the interviewees said they are doing something on their smartphones before going to sleep – mostly watching drama series or playing games. The activities tend to postpone bedtime.

In fact, according to sleep experts, the blue light emitted by the screens of mobile devices also harm sleep quality by restraining the body's secretion of melatonin, a hormone that controls the sleep-wake cycle.

The survey also found that when people have trouble falling asleep, they often revert to their smartphones for diversion, which creates a vicious cycle because the longer they stare at their screens, the more sleep evades them.

Meanwhile, minors are generally sleeping longer since after-class training schools were ordered to shut down, but most of them still don't get a full eight hours, according to the survey. People under 18 sleep on average for seven hours per night.

The survey found that most minors used that extra hour on digital entertainment. Only 27 percent of them said they were forced to stay up late because of homework.

"We urge parents to take action because adequate sleep is vital for both physical and mental development," said the report. 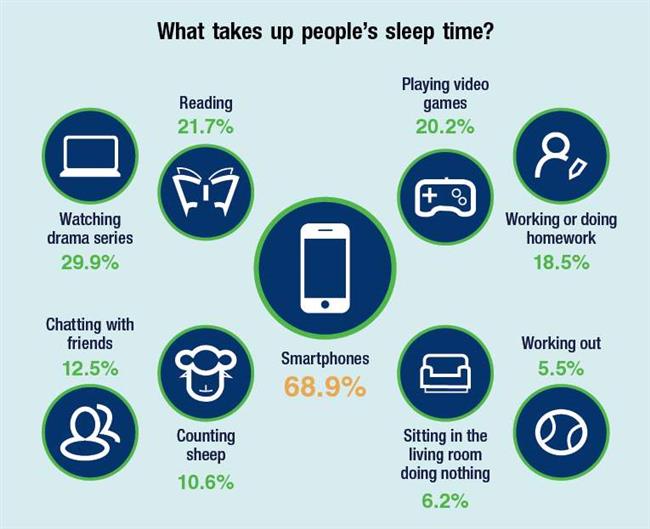 Feng Qiang, a psychiatrist and therapist, said improving sleep is easy if one has the self-discipline to form good habits.

"We always suggest that people go to sleep and get up at the same time every day, and not sleep in on weekends because it's essential for your body to form a biological clock," he said. "But it's much easier said than done."

Another important yet hard-to-do trick during a sleepless period is to resist the urge to keep checking on the time. That only adds to anxiety.

"Falling asleep is a human instinct," Feng said. "The harder you try to fall asleep, the more difficult it actually becomes."

Feng suggests that people who have trouble falling asleep change their inner dialogue from "I need to get to sleep" to "Okay, that's it! I'm just going to lie here, asleep or not." The result is that most people wake up in the morning without noticing when they fell asleep.

Feng said that everybody knows that inadequate sleep may cause health issues, such as increasing the risks of cardiac-cerebral vascular diseases, diabetes, cancers and depression. However, anxiety over not sleeping enough is also harmful.

"Everyone actually has a different, personal sleep-wake cycle, and you don't have to stick to an eight-hour sleep every night," he said. "If you sleep for around seven hours and feel good the next morning, that's enough sleep for you."

Try to arrange study, work, exercise and social activities to be completed during the day.

Practice deep breathing – slowly expand the chest cavity, inhale air, hold your breath for a while, and then slowly exhale the air. Repeat five or six times. It will feel very relaxing and can help sleep.