Warm moments in Shanghai in the time of lockdown

Working hard to help others is what many residents have done over the past locked-down week in the city. Although we cannot leave our compounds, there's still a lot we can do.

Here are a few warm, positive stories some of my friends have shared with me.

'Thank you for the assisting medical teams!'

On April 4, a medical team from Nanjing completed nucleic acid tests on residents in Qiantan, Pudong New Area. At 5:20pm, residents shouted "Thank you Nanjing" from their windows, which echoed throughout the compound.

Residents shouted "Thank you Nanjing" from their windows in Qiantan, Pudong New Area.

'We are best friends!'

On April 5, a Shanghai auntie carried a bag of food to her neighbor, a woman from another province. The woman wanted to pay for it, but the auntie refused and said: "Your hometown is far from here, and it is not easy to live in Shanghai by yourself. I hope it helps. We are both in the same building, and we are best friends."

The woman recorded the heartwarming moment, which was widely shared on social media.

On April 5, a Shanghai auntie carried a bag of food to her neighbor, a woman from another province.

'Although the pandemic hasn't ended, friendships are built in our neighborhood.'

This is what a resident wrote on April 3 on a paper bag used as a collection box for a self-testing kit during citywide antigen testing. 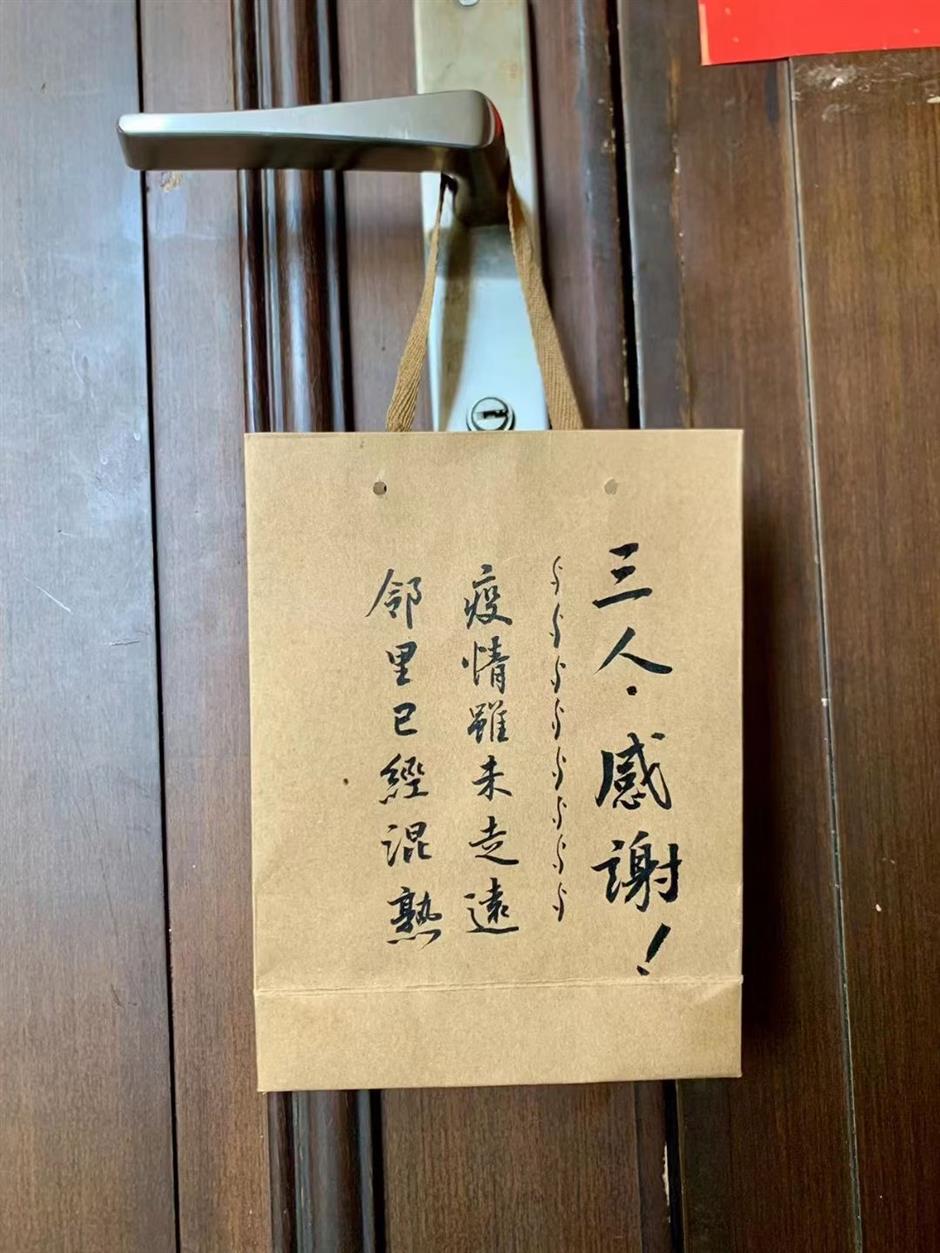 Calligraphy on the paper bag reads: "Although the pandemic has not ended, friendships are built in our neighborhood."

After antigen self-testing began in Shanghai, a resident suggested that each household hang a paper bag outside its door with the number of the family members written on it to reduce contact. The idea quickly spread across Shanghai communities, and the bag has become a communication channel between residents and volunteers to express gratitude through warm words and cute cartoons. 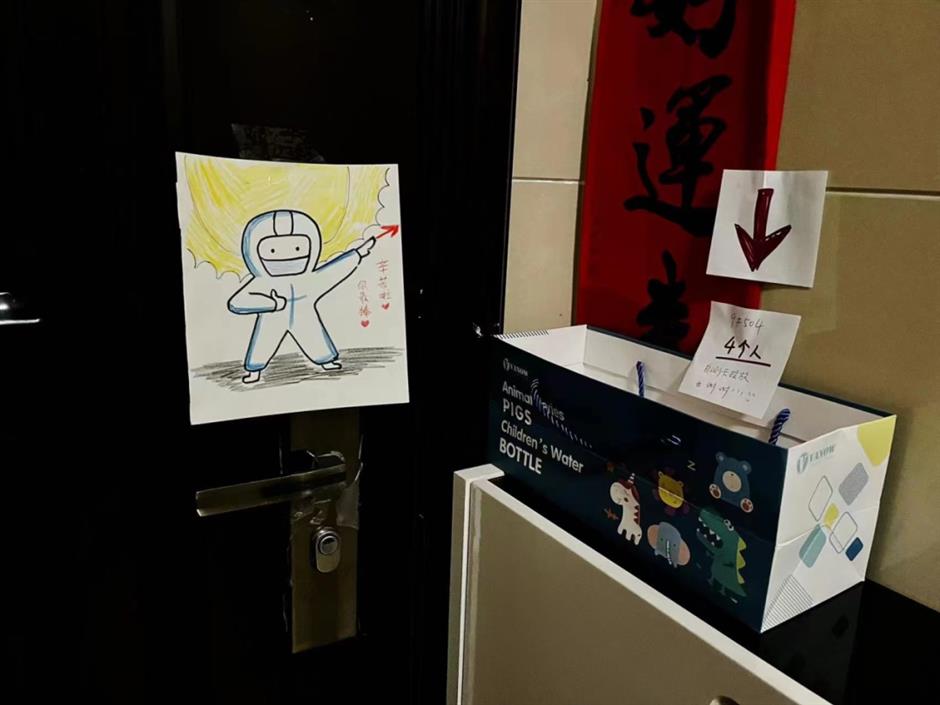 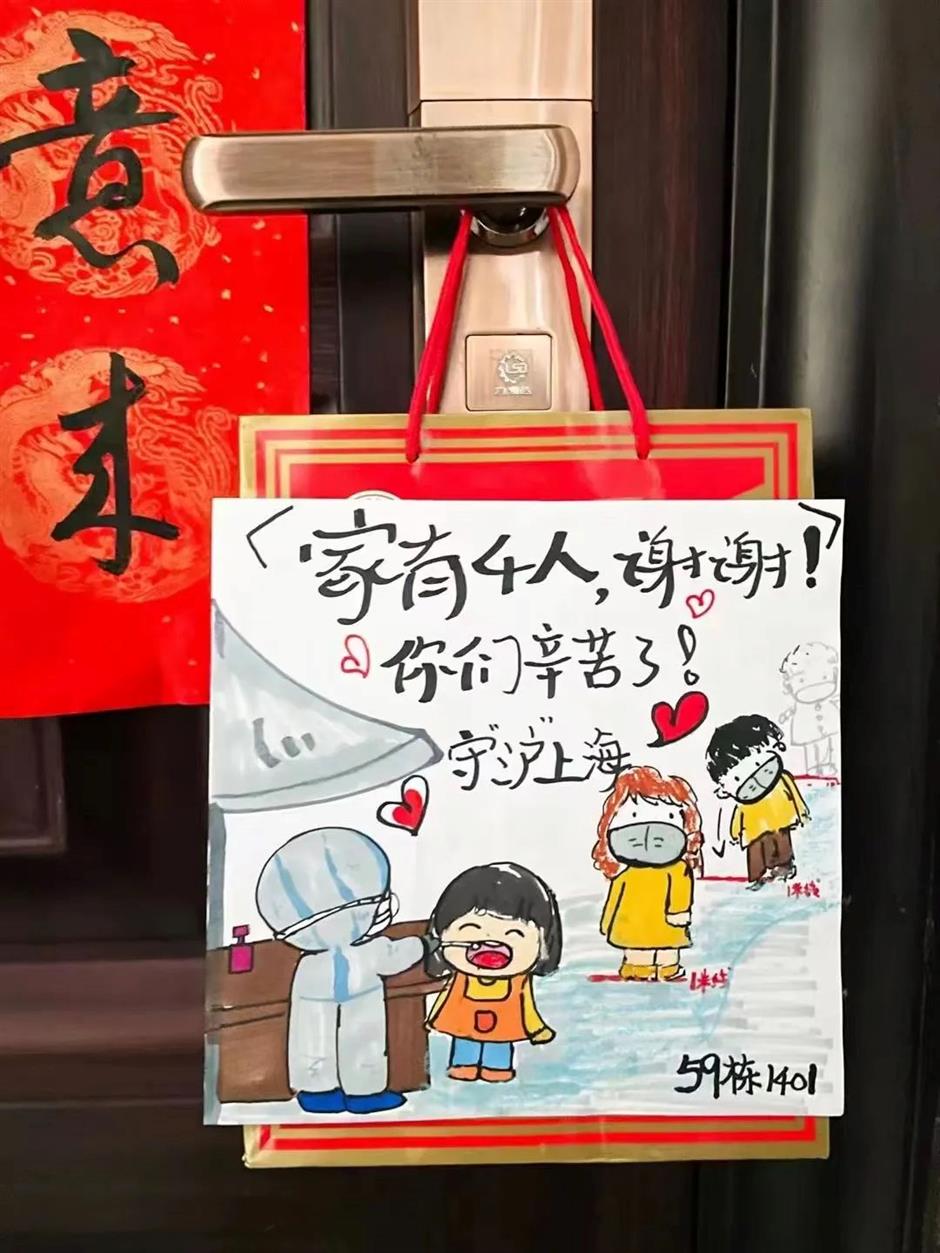 Another cute cartoon on a paper bag

'Let's buy a phone together for this Yangzhou girl!'

This is the most liked comment I have received since I forwarded the message "Help the Yangzhou girl find her phone" on social media. 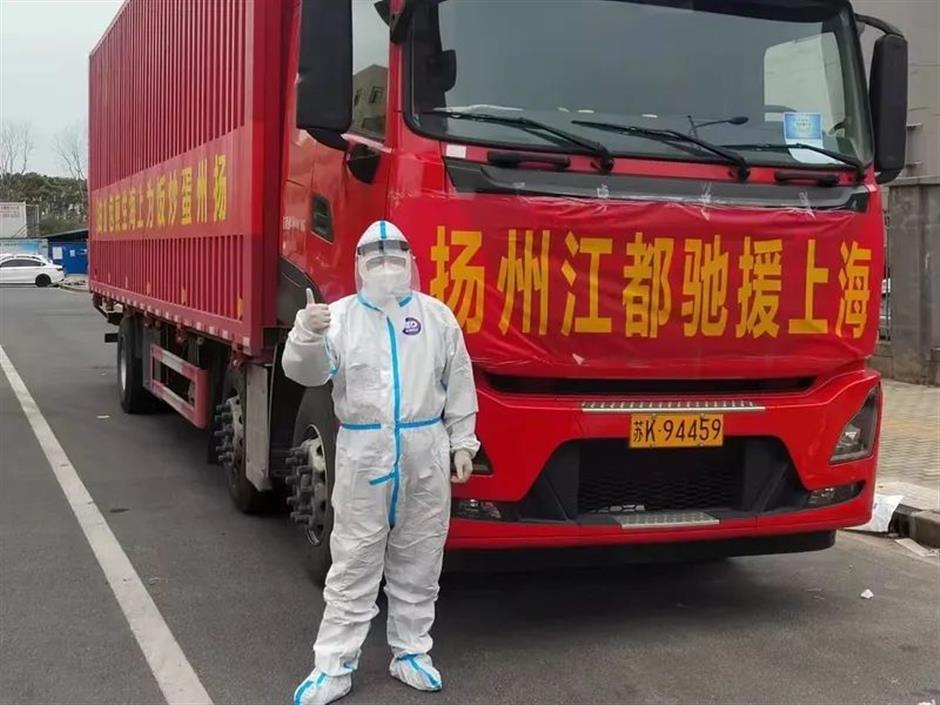 The truck carrying food parcels and the "lost" mobile phone from Yangzhou in neighboring Jiangsu Province.

The post read: "Please contact me if anyone in Shanghai received a food parcel from Yangzhou with a mobile phone in it. It was careless of my sister to leave her mobile phone while she was packing parcels."

On April 4, a post went viral that read: "Please contact me if anyone in Shanghai received a food parcel from Yangzhou with a mobile phone in it. It was careless of my sister to leave her mobile phone while she was packing parcels."

The mobile phone, with thousands of food parcels on trucks, was sent to Hongqiao Town in Minhang District where I live.

I received one of the food parcels at 7am on April 5, as well as the "help the Yangzhou girl find her phone" message in all our community's WeChat groups. 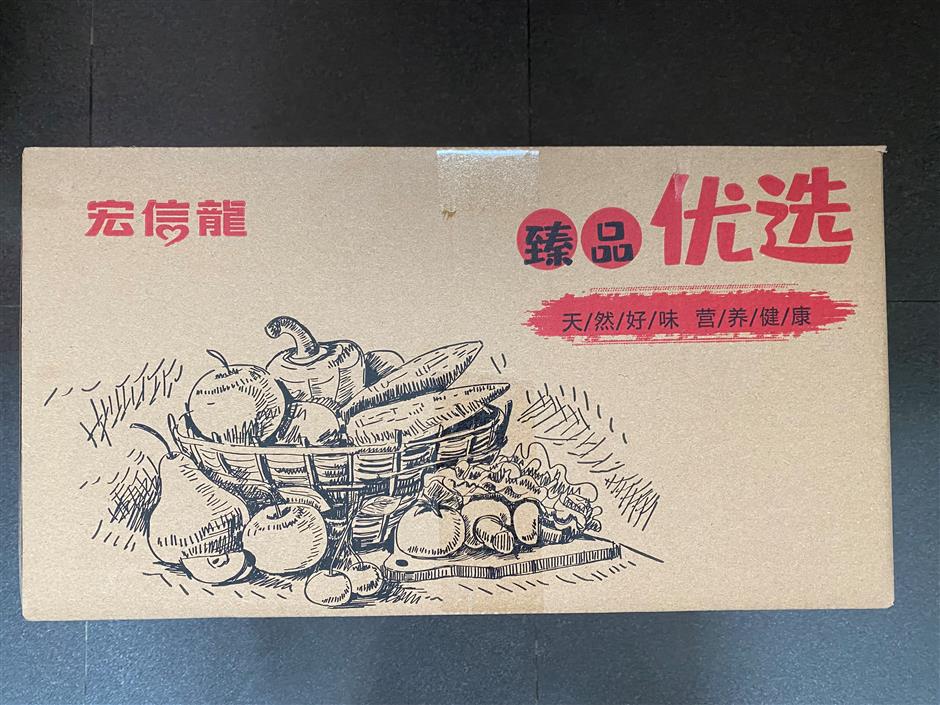 The food box from Yangzhou

It was found in the evening by a volunteer who noticed a vibration in one of the parcels and gave it to the neighborhood committee, which later found the truck driver to bring the phone back to Yangzhou.

'Protect the lights of thousands of homes.' 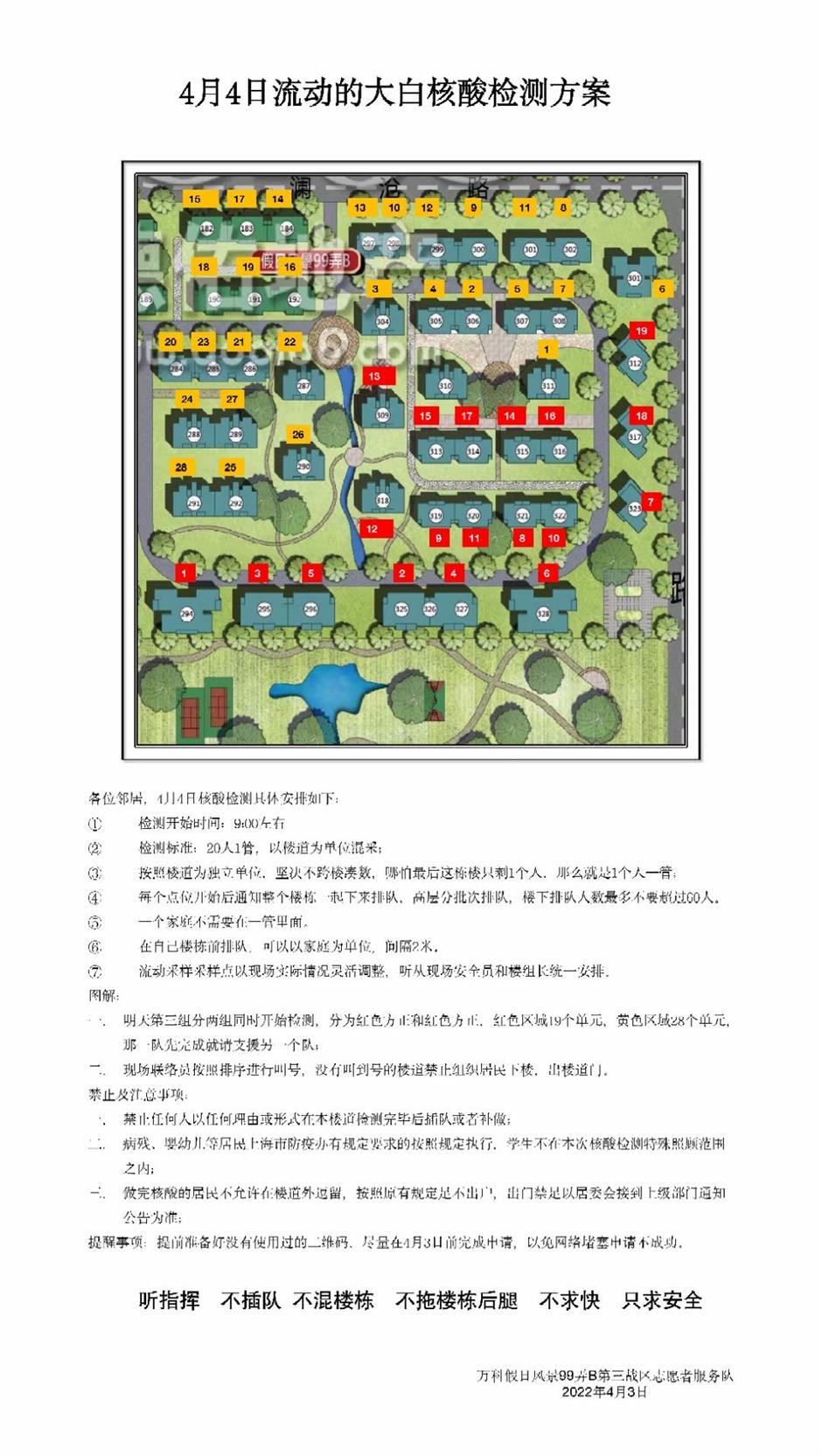 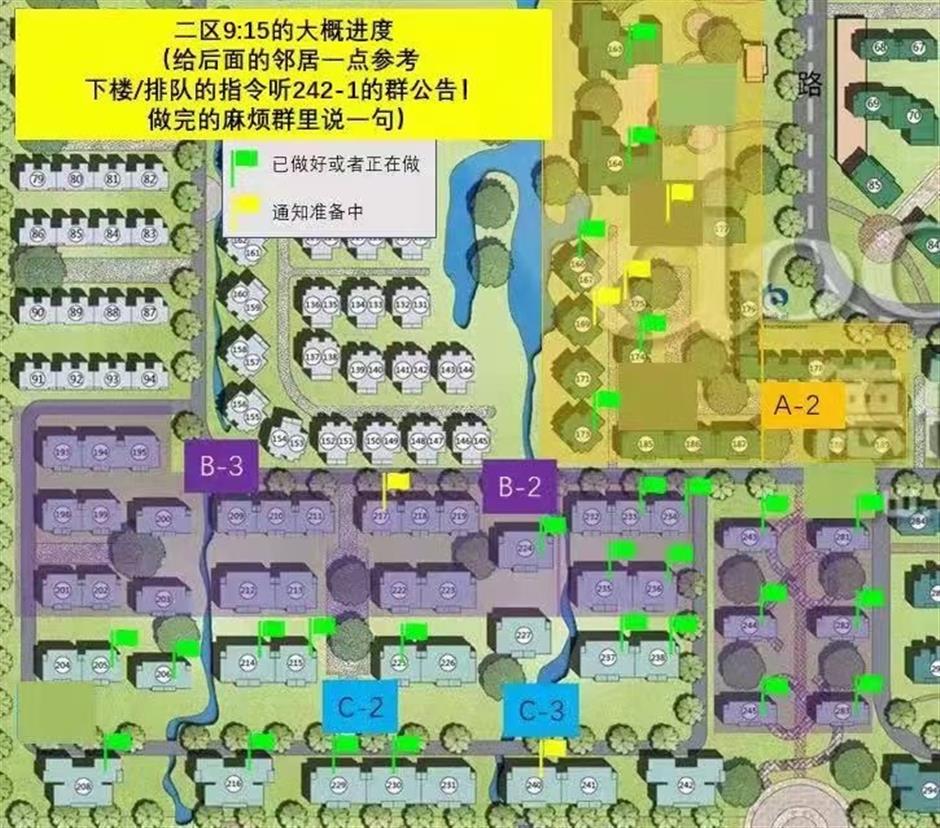 With the process, they completed nucleic acid tests for 9,000 residents in three hours.

'When I see volunteers packing food and delivering it to us, I just want to say thank you so much.'

One of my friends took photos of volunteers and posted them on her WeChat Moments to show how much she appreciates their help. 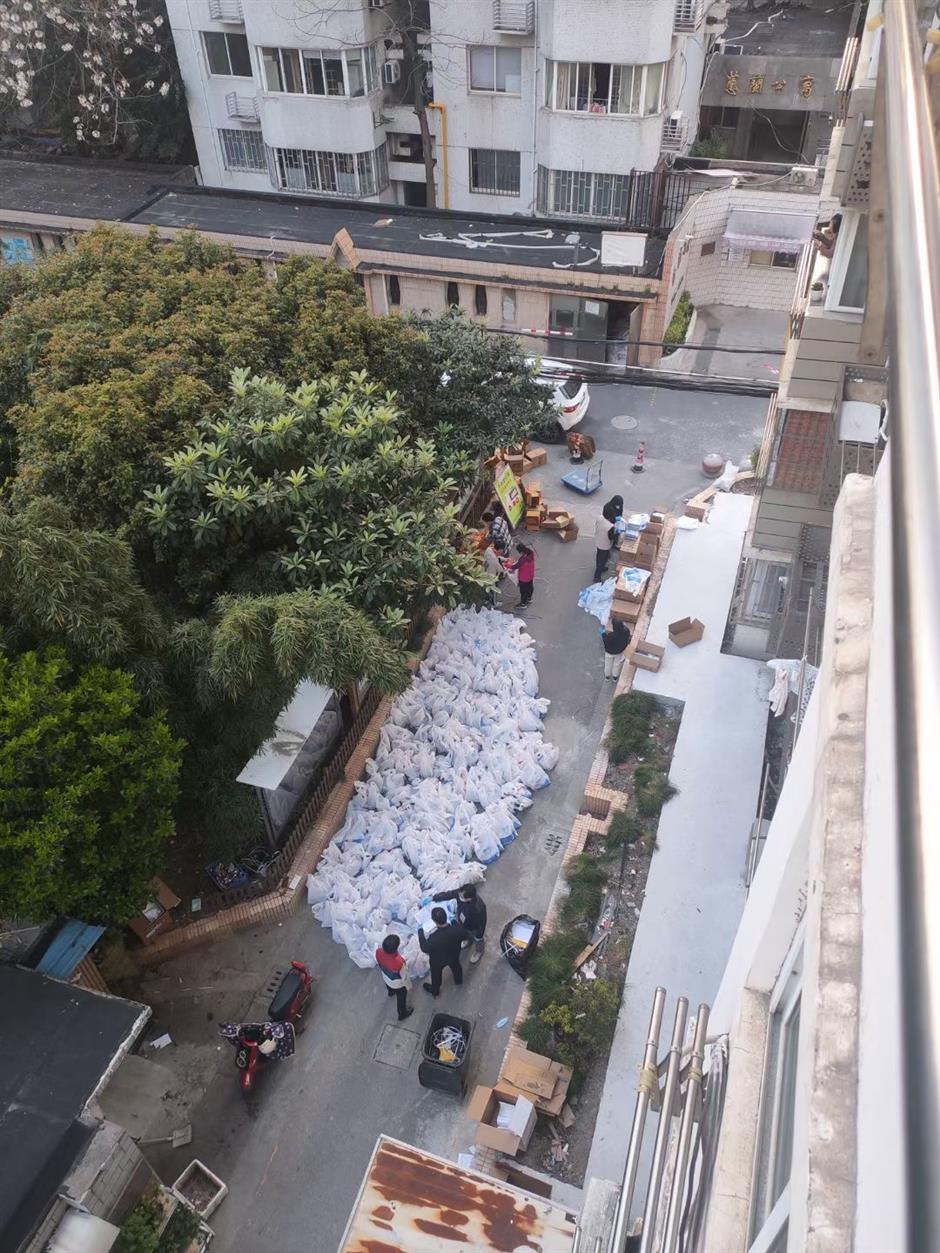 'Living in Shanghai, what I feel most is love, care and help.'

A friend shared these words with a story ─ "I had lived alone in a convenience store for 23 days." 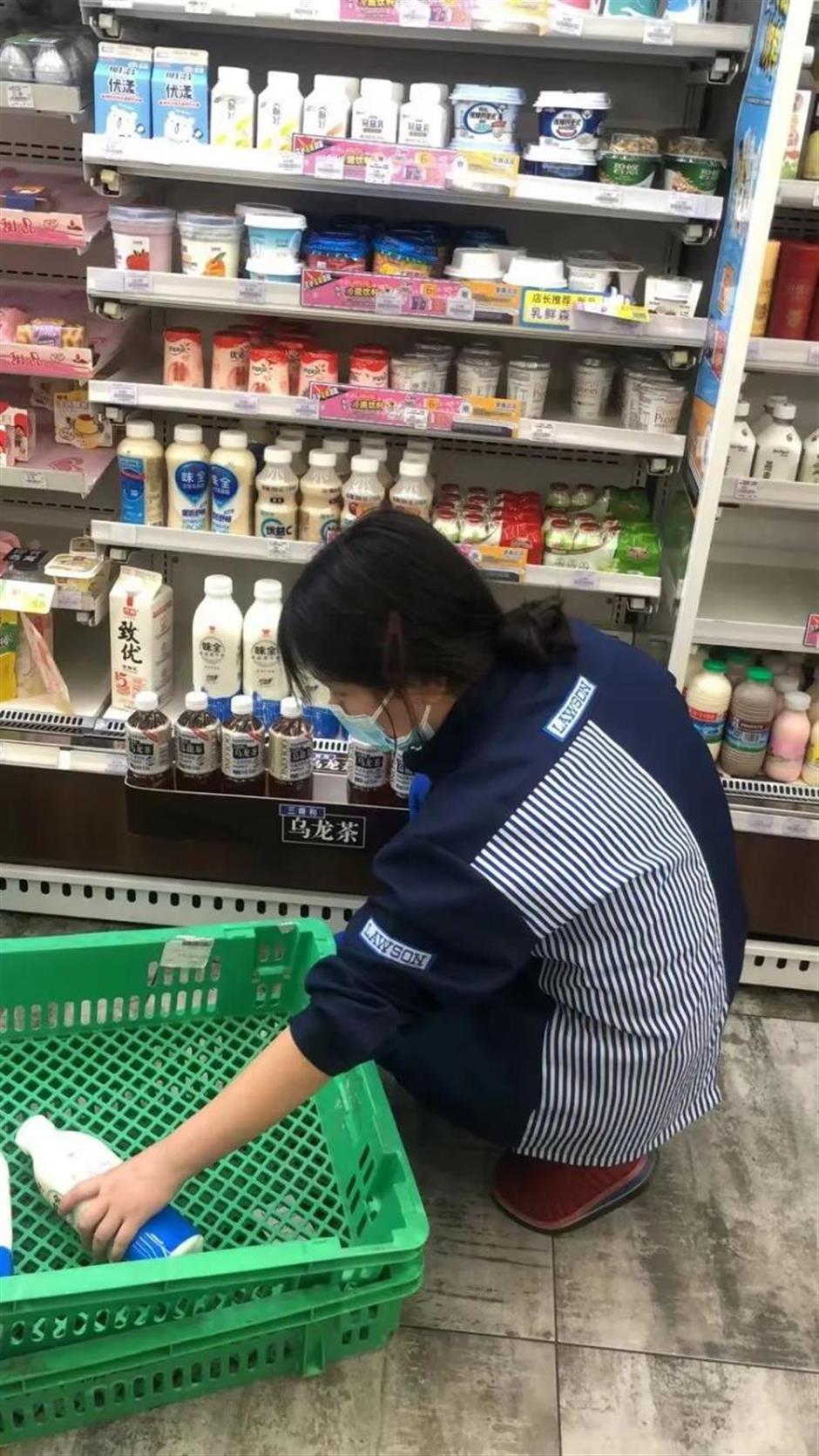 Li Na, manager of a Lawson convenience store in Minhang District, had lived alone in the store for 23 days.

The protagonist of the story is Li Na, manager of a Lawson convenience store in Minhang District. Originally from Anhui Province, she came to Shanghai when she was 13 and has been in Shanghai for 20 years.

From March 9 to March 31, Li ran the convenience store by herself. There was no bed or shower and she slept on the floor.

'I have the best neighbors in China.'

In a building in Mandarin City, Minhang District, residents set up a corner shelf on the first floor with vegetables, fruit, snacks, paper towels and other daily necessities. Neighbors share their supplies to help each other. 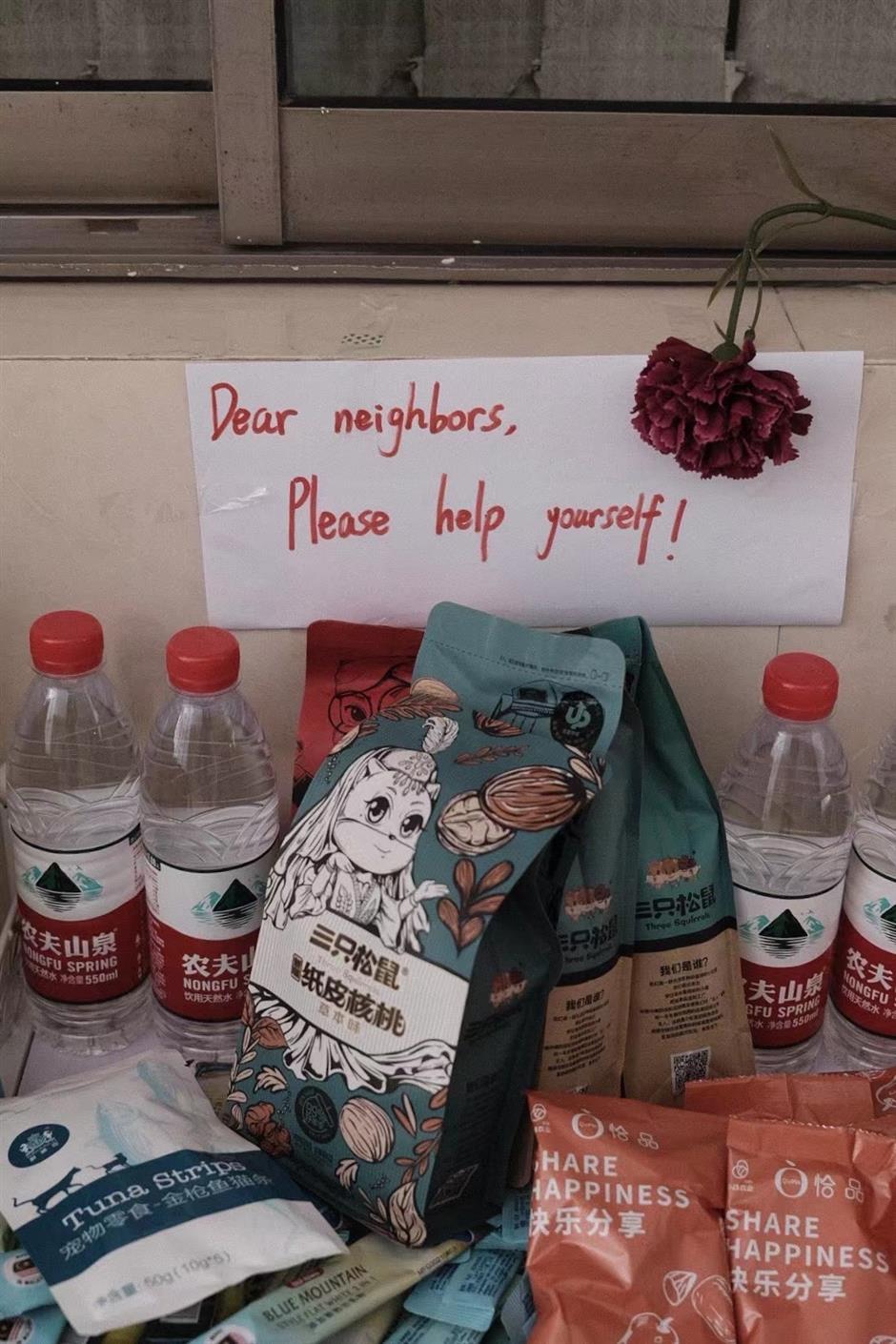 Food neighbors donate to the corner. 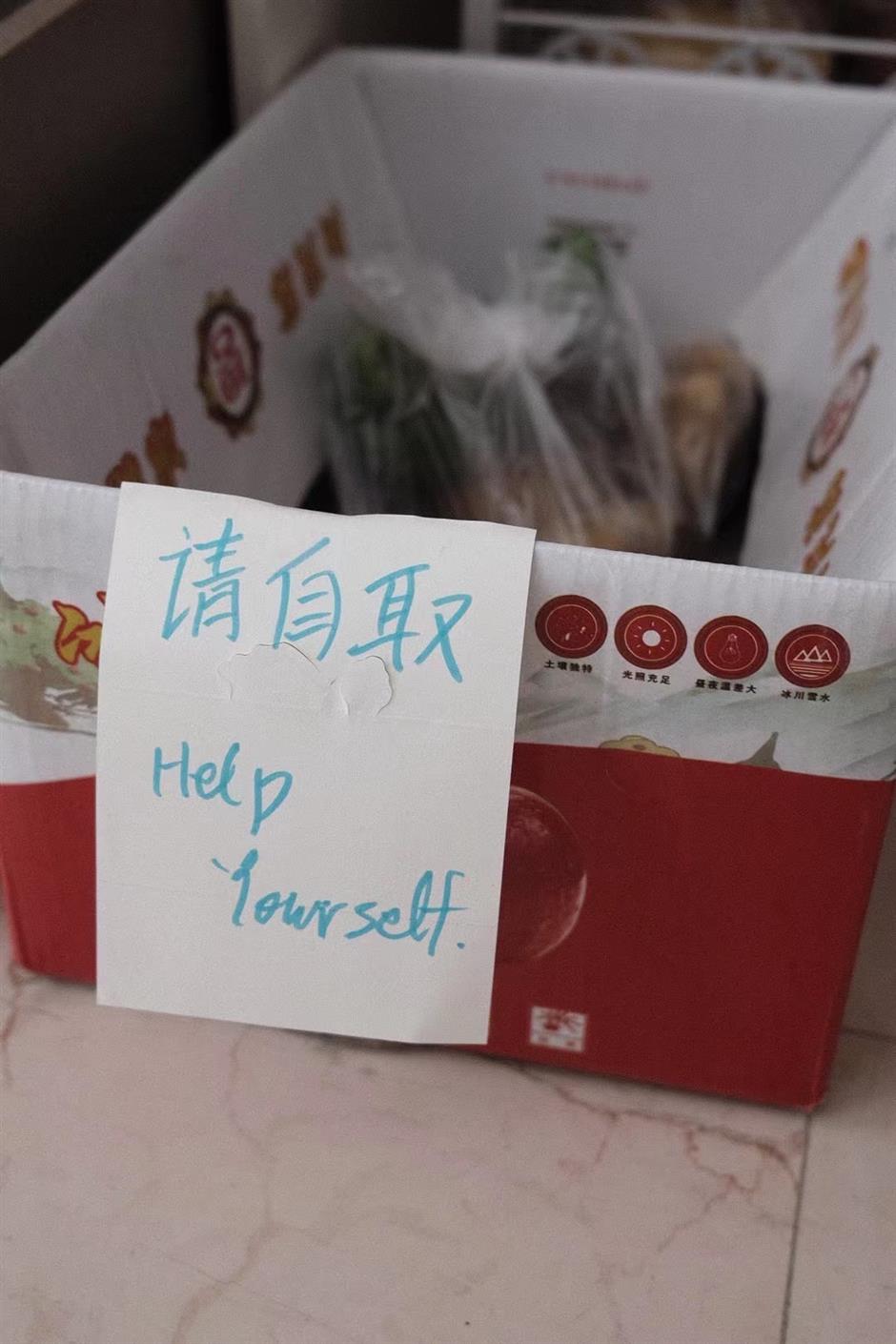 Vegetables neighbors donate to the corner.

'The lockdown is tough, but people in the city are warm.'

On March 30, several FamilyMart employees were locked down in the convenience store in a compound in Xinzhuang Town, Minhang District. Jiang Ying, a volunteer in the compound, heard they didn't have hot meals and decided to cook them a chicken. However, frustrated by her poor cooking skills, she asked for help in the community. An auntie volunteered to cook for them. Two hours later, a hot, braised chicken was delivered to the staff. 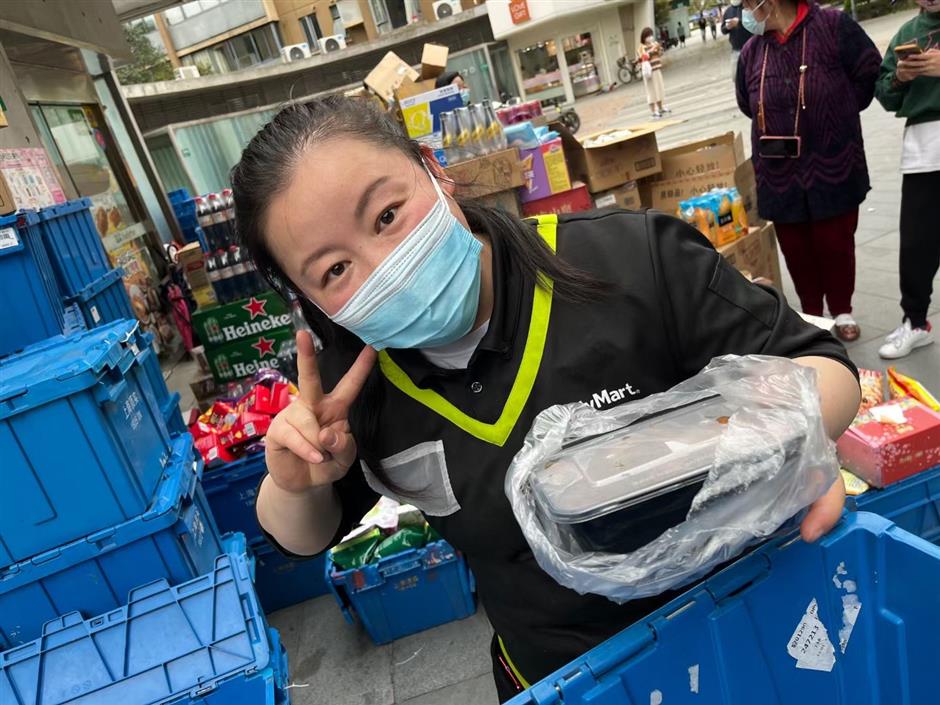 A FamilyMart employee with the hot, braised chicken 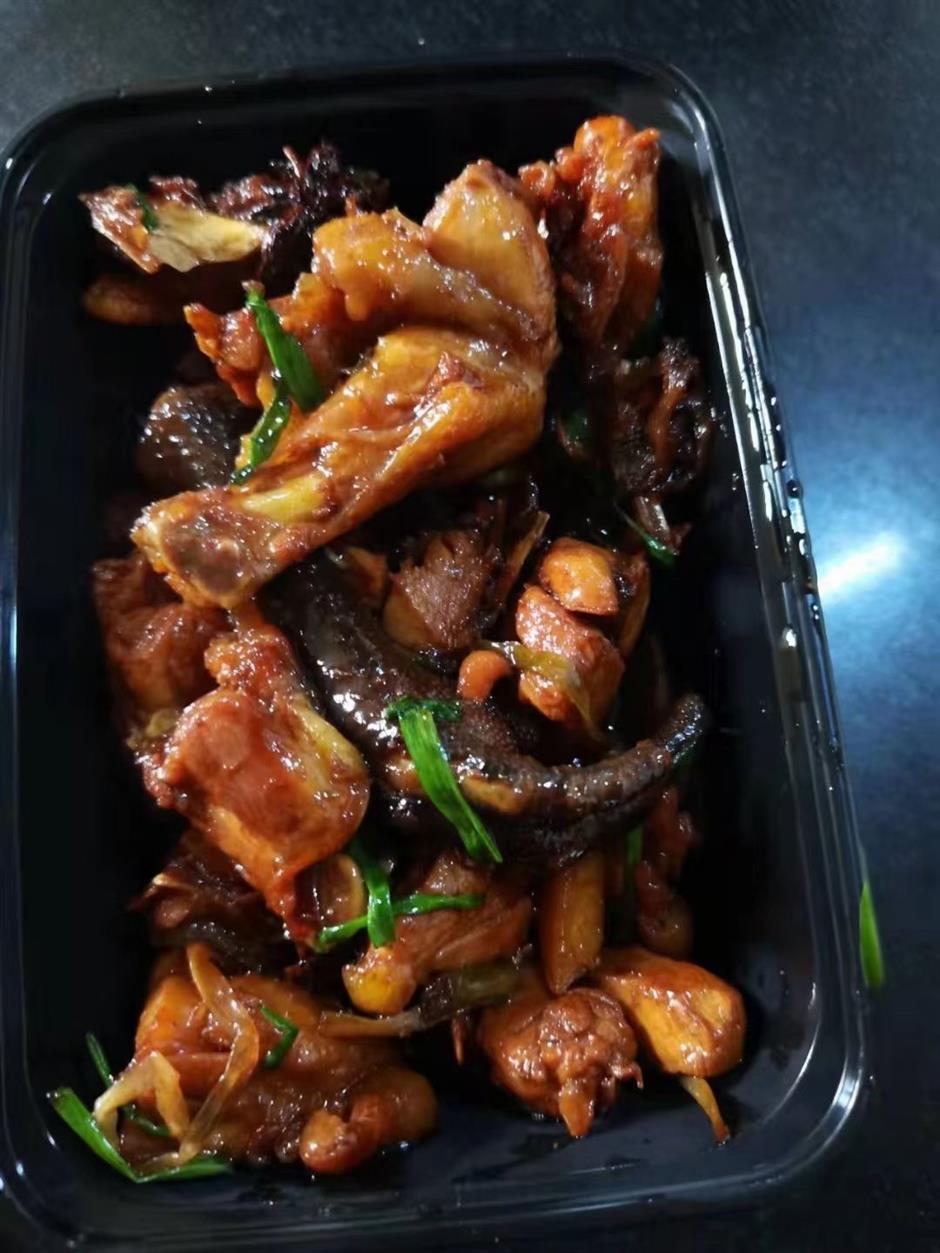 On April 4, many locals dressed up for citywide nucleic acid tests, including this small, pink dinosaur, as a way to stay positive and find joy. 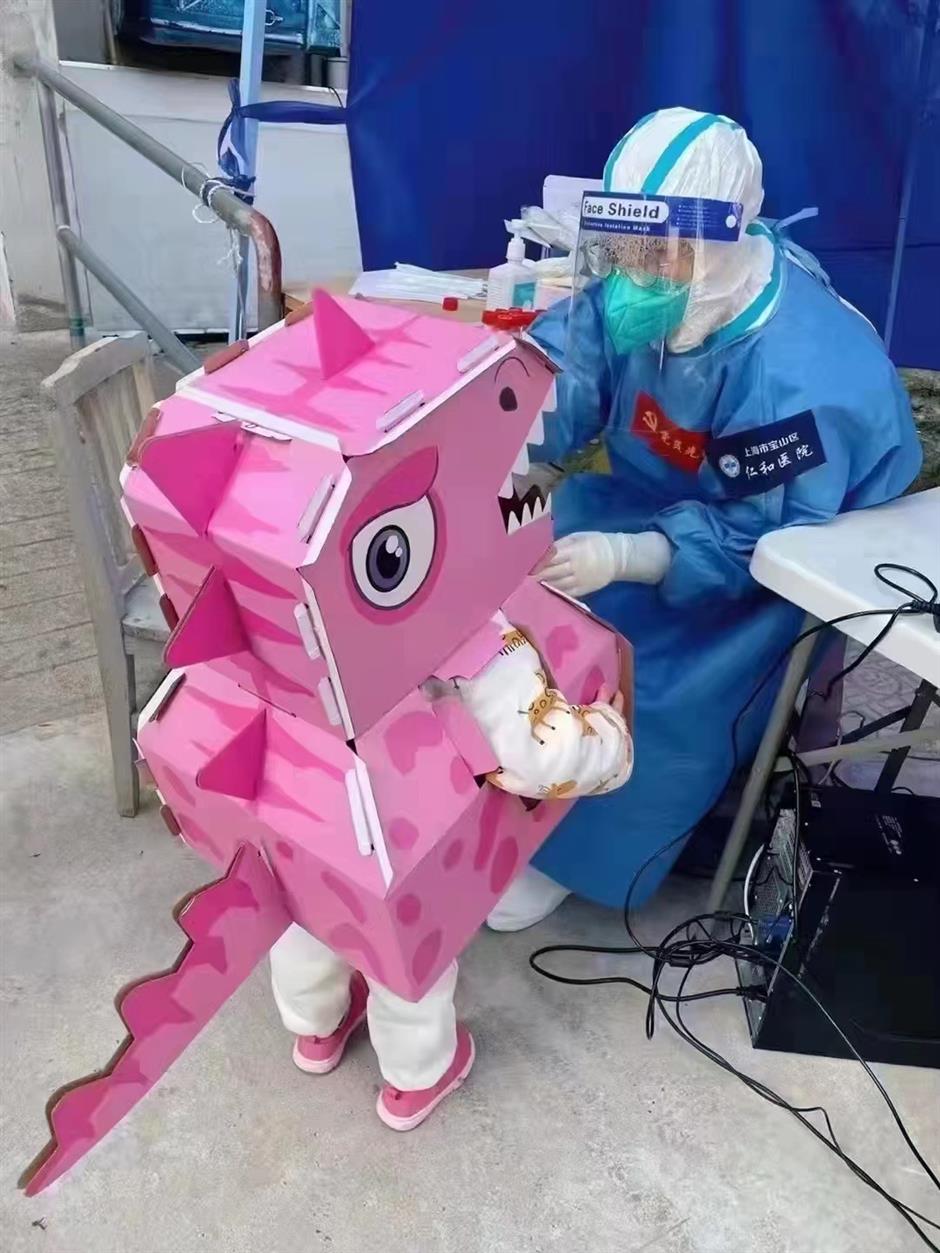 A kid dressed up as a little dinosaur for the nucleic acid test.