Turning a run-down apartment into a lovingly abode

Greek architect Kostas Chatzigiannis, who had lived in Shanghai for 12 years, went back home for Christmas in 2019. When the pandemic struck, he was unable to make his way back to the city.

"So I actively started looking for apartments with cool characteristics and charm. As the pandemic made it hard for people to move between China and Europe, I decided to shift part of my focus to searching and investing in nice properties in Athens and in my hometown, Thessaloniki," Chatzigiannis said.

He invested in a 1960s run-down apartment in a buzzing neighborhood in Athens and lovingly restored it. The colorful, refreshing property is now his abode.

The neighborhood where the 95-square-meter apartment is located is called Plateia Amerikis (America Square). It was a well-known area in the 20th century. Artists liked it because it had a lot of theaters and was close to the city's historic center.

Most of the buildings were built between the 1950s and 1960s, and boast great features like high ceilings, parquet, terrazzo and marble floors. 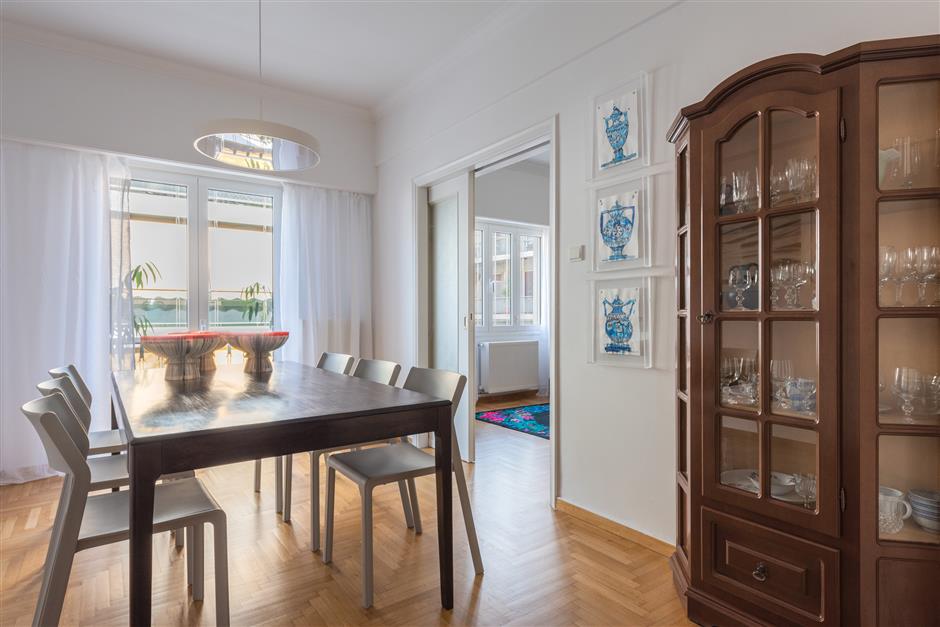 This run-down apartment has been lovingly restored, with its cool characteristics and charm retained.

When Chatzigiannis first saw it, it was in a very run-down condition.

"It had not been renovated and refreshed in many years. As is often the case, old people inhabited these apartments for decades and took care of them, but, of course, their idea of ​​​​​​​​​​modern amenities is not the same as ours today," he said.

The layout, however, appealed to him.

"The way architects used to design in the past was truly based on human needs, the feeling of privacy and comfort, as well as a separation between the 'public' and private areas in the house."

The only modification Chatzigiannis made was to open up the kitchen by knocking down a wall (only the maid used to enter the kitchen in the past) and turning the maid room into a large storage and laundry room. 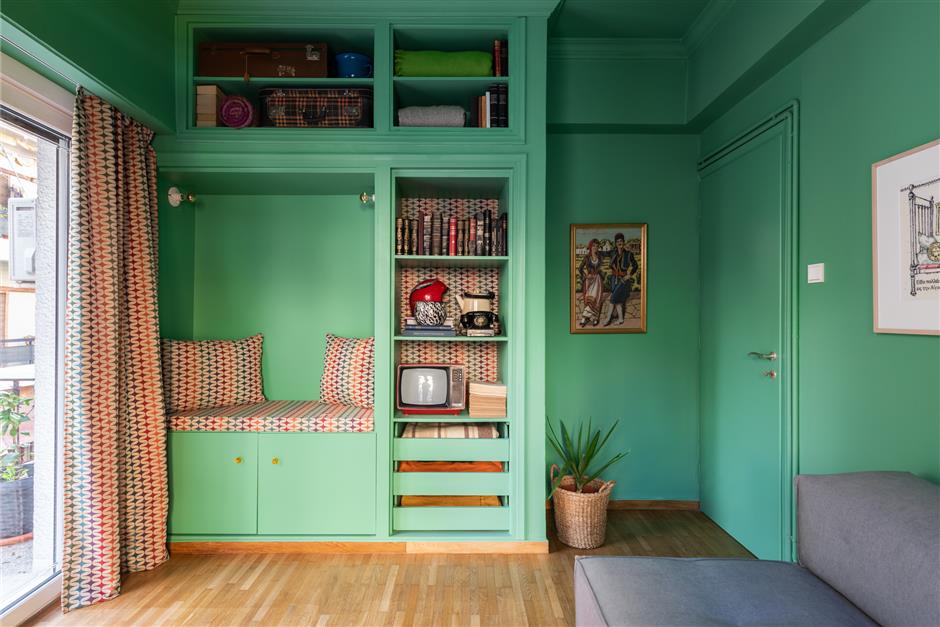 The library is created by altering the previous built-in closet from the 1960s.

He didn't try to force a certain style on it, but he did try to keep some of the original materials and features of the interior.

"However, as in every project, I also bring my own aesthetics into play, especially when it comes to new materials and additions," he said.

Each room brings out different emotions and is matched by different theme colors.

"I use different rooms at different times of the day, for different purposes, and for various levels of intimacy. The living and dining rooms are in off-white hues; the entrance and kitchen are in bright washed-out yellow, but there is a strong, vivid green in the library/lounge room at the corner of the apartment." 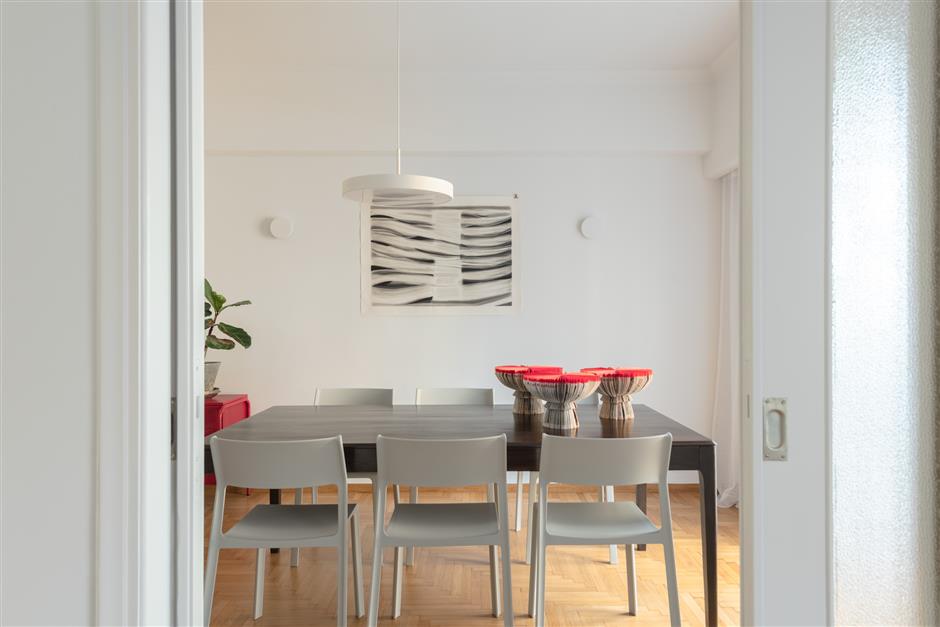 Chatzigiannis considers the library/lounge the funkiest, adding visual interest to the space. It was a bedroom before. The library inside was created by altering the previous built-in closet from the 1960s. The effect is both cocooning and intimate.

"I always have my morning coffee and weekend afternoon nap in this room."

Chatzigiannis relishes the task of furniture selection and interior styling.

"This is one of my favorite parts of the renovation process, and I keep it 'messy' on purpose. I cannot imagine selecting the furnishings for an old apartment out of brand catalogs and PPT presentations only," he said. 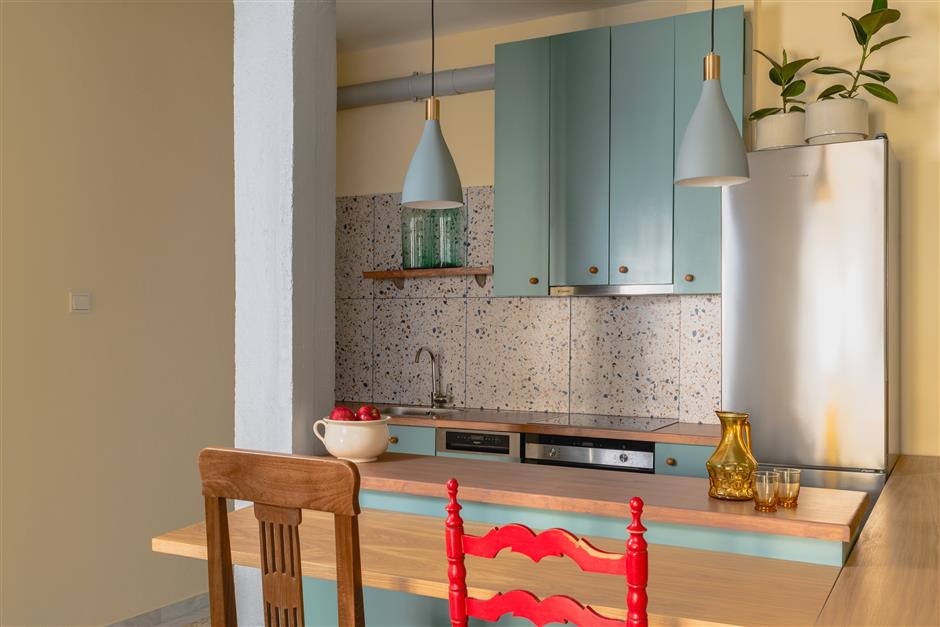 The entrance and kitchen is in bright washed-out yellow, creating a refreshing visual impact.

"Of course, some items, like sofas and dining tables, were newly purchased and customized to the rooms' dimensions. Many other items came from my visits to flea markets, and vintage stores. Some were found in the apartment in the first place."

Highlights include a colorful Bessarabian-style rug in the living area, hand woven by artisans from the mountainous regions of Greece where Chatzigiannis came from, and some framed pieces are embroidered, depicting Greek folklore traditions.

"I also collect vintage electric items, such as a TV from the former Soviet Union, old telephones, radios and old books. The contemporary pieces were curated by my good friend Aliki Tsirliagkou from Nitra Gallery, including pieces by Alexandros Maganiotis, Christina Mitrentse, Luca De Salvia, Alexandra Roussopoulos and ACHT collaborated."