Wulin Road, dubbed the "No. 1 women's apparel street in China," reopened to the public on August 4 after months of renovation.

In Hangzhou's downtown area, the road has long been considered a symbol of the city's booming apparel retail industry due to its hundreds of boutiques offering a constantly changing wardrobe for women.

Hangzhou government in 2002 forged this narrow 1,650-meter road into a long strip of stylish apparel stores. It hosted more than 400 garment shops at its peak and attracted an average of 30,000 customers every day. Many popular women's apparel brands would open a store on the street to showcase their latest designs.

However, the e-commerce boom has meant tough times for the surviving retailers. A combination of high rents, fierce competition from online platforms and glitzy new shopping malls have forced many boutiques on Wulin Road to close.

Two years ago, Hangzhou government stepped in to apply a new consumption concept that transformed traditional retail streets into destinations that combined shopping with dining, sightseeing and the creative industry.

Now, the upgraded Wulin Road is expected to win back the territory for the women's wear industry. The renovation includes more plants and flowers, new slabs, roadside benches and a smart platform that links visitors and the commercial block. 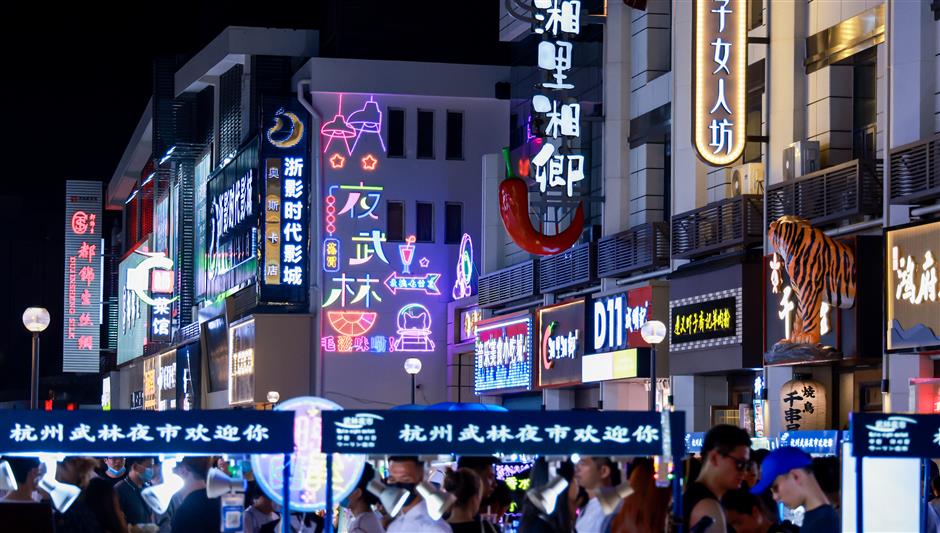 A night scene on Wulin Road, which opened on August 4 after a major facelift

Wulin Road is located at the center of the Wulin commercial belt in Gongshu District, and nearby upscale shopping malls include Intime, Kerry Center and Hangzhou Tower. Led by the commercial strip, total retail sales of consumer goods in the district exceeded 127.3 billion yuan (US$18.8 billion) in 2021, ranking first in Zhejiang Province.

In the past, consumers have tended to flock to "hot" mass-marketed merchandise, but they are becoming more discerning and now often prefer original designs rather than cheap copies.

Hangzhou government has hosted the China International Women's Wear Design Competition for many years, and it has consistently provided new designs for the market. Many brands purchase the designs and commission factories to produce them under their own brand names.

At the opening of the renovated Wulin Road on August 4, a batch of Hangzhou's famous local brands displayed new products, including Jasonwood, INXX, J11 and Sennos & Zhou.

But the Hangzhou government's local fashion initiative offers more. It announced a design academy in tandem with local universities at the opening, a plan to recruit top-flight clothing designers from around China and give a boost to the industry.

Except for the apparel, dining and creative industries, the renovated Wulin Road shopping street has been integrated with Song Dynasty (960-1279) elements. Authorities have turned a segment into an ancient wasigoulan (瓦肆勾栏), a grassroots location providing a style of entertainment dating back a millennium.

The Meihe Pavilion, at the intersection of Wulin and Jiaochang roads, and nearby lanes have been decorated in the style of an authentic wasigoulan, featuring intangible cultural heritage elements and enabling performances of traditional operas and music.

The pavilion was built by the descendants of Song Dynasty poet Lin Bu (967-1028), one of the most famous poets of his day. According to the old adage, Lin was indifferent to fame and gain, content to follow the lifestyle of ancient people. He led a poor life, but experienced inner peace in Hangzhou. 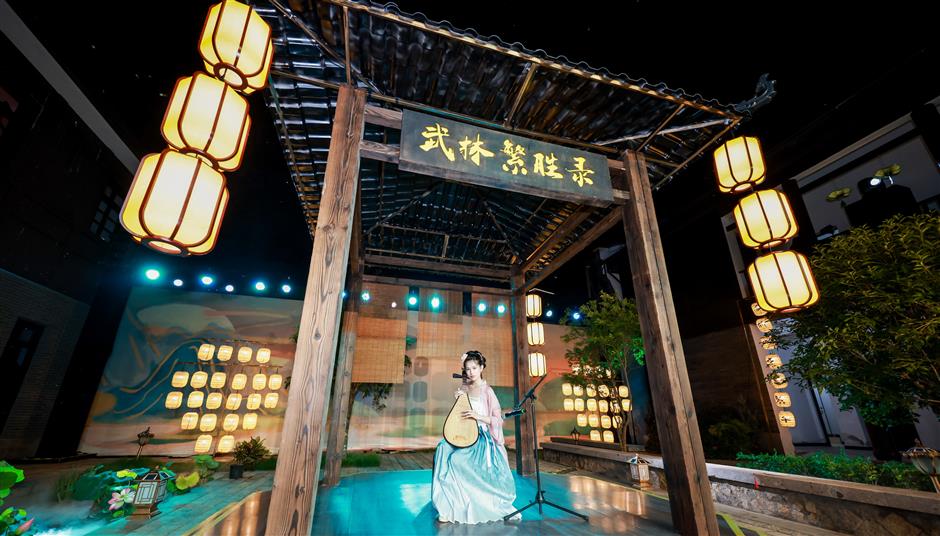 A woman performer in traditional hanfu is ready to play a tune at the wasigoulan, an open-air stage for public entertainment.

The revival of Wulin Road is considered to be a lifeline for the women's wear industry in China.

For many years, Hangzhou has been a mecca for wanghong (Internet influencers) thanks to its fully developed industry chain, including fabrics, designers, logistics and e-commerce platforms.

Physical stores faced stiff competition online, and some had to shut.

Now they are adopting e-commerce and livestreaming to revive their business. Local authorities have encouraged the livestreaming industry, inviting design studios and wanghong to boost sales by using the new retail platforms.

Twenty years ago, Hangzhou pushed its ambition to position the city as fashion capital, resulting in businesses collaborating to make Wulin Road more tourist-friendly and expand the shopping and leisure possibilities.

It enticed visitors with modern designs and became the shop window for Hangzhou's fashion scene. A trip to the city without shopping on Wulin was even considered incomplete. The revitalization of the precinct marks the start of a return to those halcyon days.