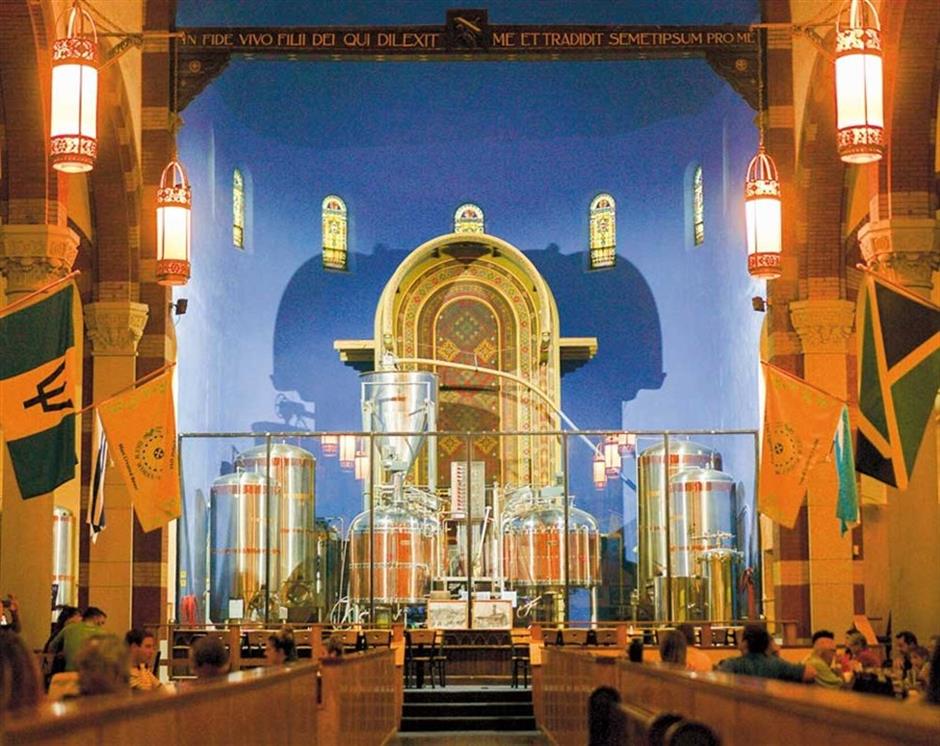 Beer brewing tanks sit at the former altar of The church Brew Works, an old church renovated into a brewery, in Pittsburgh.

IRA Gerhart finally found a place last year to fulfill his yearslong dream of opening a brewery: a 1923 Presbyterian church. It was cheap, charming and just blocks from downtown Youngstown.

But soon after Gerhart announced his plans, residents and a minister at a Baptist church a block away complained about alcohol being served in the former house of worship.

“I get it, you know, just the idea of putting a bar in God’s house,” Gerhart said. “If we didn’t choose to do this, most likely, it’d fall down or get torn down. I told them we’re not going to be a rowdy college bar.”

With stained glass, brick walls and large sanctuaries ideal for holding vats and lots of drinkers, churches renovated into breweries attract beer lovers but can grate on the spiritual sensibilities of clergy and worshippers.

At least 10 new breweries have opened in old churches in the US since 2011, and at least four more are slated to open in the next year.

The trend started after the 2007 recession as churches merged or closed because of dwindling membership. Sex abuse settlements by the Roman Catholic Church starting in the mid-2000s were not a factor because those payments were largely covered by insurers, according to Terrence Donilon, spokesman for the archdiocese of Boston.

Gerhart’s is scheduled to open this month after winning over skeptics like the Baptist minister and obtaining a liquor license.

“We don’t want (churches) to become a liquor store,” said Michael Schafer, spokesman for the Archdiocese of Cincinnati, which has imposed restrictions on turning closed churches into beer halls. “We don’t think that’s appropriate for a house of worship.”

At the Church Brew Works in Pittsburgh, an early church-turned-brewery that opened in 1996, patrons slide into booths crafted from pews. Towering steel and copper vats sit on the church’s former altar. Yellow flags line the sanctuary emblazoned with the brewery’s motto: “ON THE EIGHTH DAY. MAN CREATED BEER.”

Owner Sean Casey bought the former church because it was cheap and reminded him of beer halls he used to frequent in Munich. Aficionados cite its rustic decor as a major draw.

“It’s got that ‘wow’ factor,” said Jesse Anderson-Lehnan, 27. “But it still feels like a normal place, it doesn’t feel weird to come and sit at the bar and talk for a few hours.”

When St John the Baptist Church was desanctified and sold to Casey, Roman Catholics in the diocese voiced their opposition, leading to the deed restrictions to stop other closed churches from becoming bars and clubs.

While the Diocese of Cincinnati also has imposed such restrictions, it’s unclear how much company it and Youngstown have.

Limits also exist in the Diocese of Altoona-Johnstown, Pennsylvania, while the Boston archdiocese says it solicits proposals from potential buyers and screens them to make sure they’re in line with Catholic values.

Churches are uniquely difficult to renovate, preservationists say. Large stained windows and cavernous sanctuaries are tough to partition into condominiums. Historic landmark protections can bar new owners from knocking down some churches, leading them to sit empty and decay.

But the same vaulted ceilings that keep housing developers away from churches also lend them an old-world air hard to replicate elsewhere, making former houses of worship particularly suitable as dignified beer halls.

There, even clergy members sometimes aren’t so opposed to quaffing a pint. Some are regulars at the Church Brew Works, Casey said, where they can order Pipe Organ pale ale or Pious Monk dark lager.

Cincinnati’s Taft’s Ale House kicked off its grand opening in the 167-year-old St Paul’s Evangelical Protestant Church with a “blessing of the beers.” A television report at the time shows the Rev John Kroeger, a Catholic priest, giving the blessing.

“God of all creation, you gift us with friends, and food and drink,” he said, eyes cast upward. “Bless these kegs, and every keg that will be brewed here. Bless all those freshened here, and all those gathered in the days, and months, and years to come!”