More than a staple, bread has a fascinating history

Shaobing (烧饼), baked bread, is a staple enjoyed from north to south, east to west, with thousands of years of history.

Some varieties of shaobing were introduced from Xiyu, the area west of Yumenguan (Dunhuang, Gansu Province) which includes today’s Xinjiang Uygur Autonomous Region and parts of Central Asia in the Han Dynasty (206 BC-AD 220). It was then called hubing (胡饼).

Traditionally baked in clay ovens, these flatbreads and rolls now come in more than 100 styles and flavors all across China, sweet or savory, with or without fillings.

Dabing, or big flatbread, is one of the “big four” in a traditional breakfast in Shanghai and Suzhou, Jiangsu Province alongside youtiao (fried dough sticks), soy milk and cifan (glutinous rice rolls).

The sweet dabing is simply made of flour and sugar with toasted sesame seeds sprinkled on top, while the savory kind requires the extra steps of brushing on vegetable oil and seasonings.

The flaky flatbread is often paired with freshly fried youtiao, a quite heavy staple-and-staple combo favored by many locals. 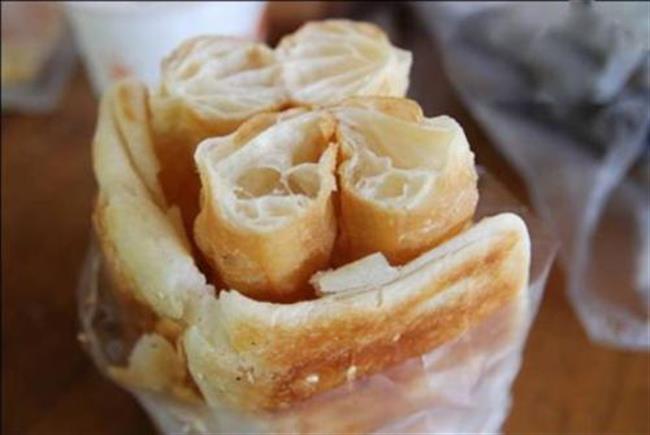 From Huangqiao Town in northern Jiangsu Province, the Huangqiao shaobing is a famous savory baked bun.

This bread was named after the 1940 Battle of Huangqiao, when the locals rushed to the front line to deliver the baked buns to the soldiers of the New Fourth Army. 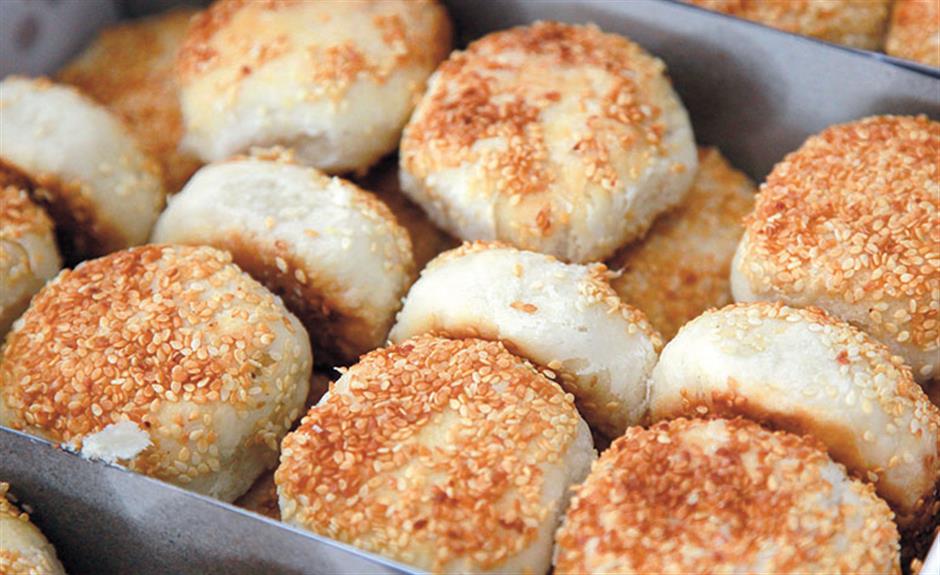 In northern China, the baked breads are sometimes called huoshao — “fire burning.” A staple, huoshao is more like plain flatbread without a crispy pastry-like crust and layers.

Made of leavened dough, it’s commonly served with lamb or beef soups. Various vegetables, tofu and meats can also be stuffed inside huoshao to make sandwiches.

The people in Hebei love donkey meat so much that there is the saying: “In heaven there is dragon meat, on earth there is donkey meat.”

Luzhu huoshao is a humble Beijing snack dating back to the Qing Dynasty (1644-1911). A bowl of luzhu huoshao consists of mainly pig intestines, lungs, streaky pork, fried tofu and chunks of huoshao. The offal is stewed for hours with dozens of flavorings to neutralize the strong taste.

The dish originated in the imperial court based on a dish called suzaorou, which stews streaky pork in a rich broth. But pork was too expensive for ordinary people in those days, so they used offal instead.

Luzhu huoshao is a traditional Beijing delicacy, but it is not widely liked outside the city because of its ingredients and its richness.

The strong flavor of the meat and huoshao in hot broth is also a great dish to pair with white liquor, especially for keeping warm in winter. 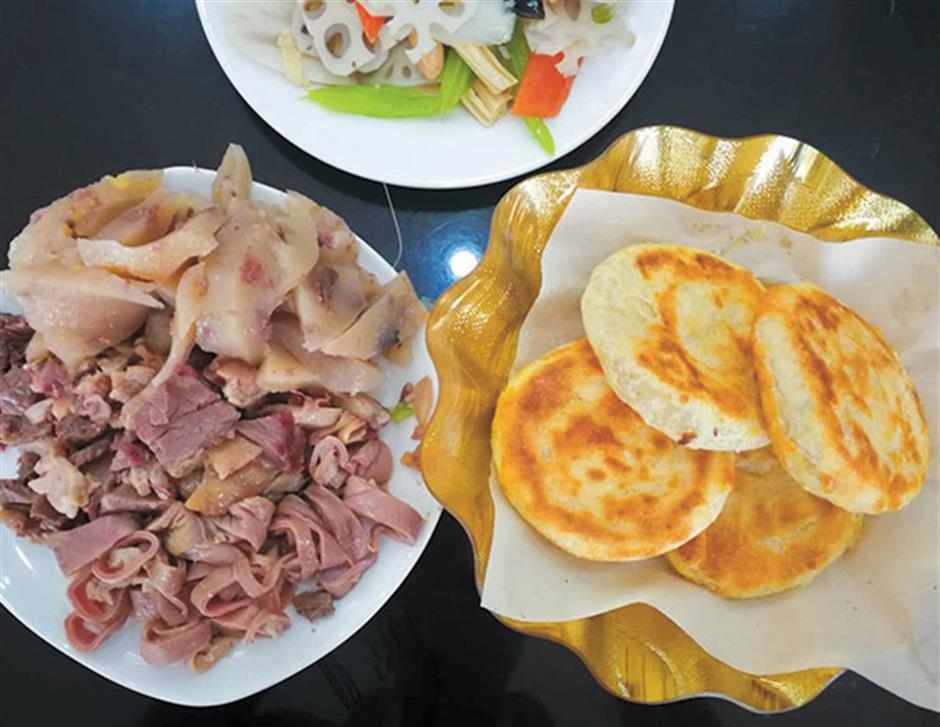 The dark bread is the result of adding brown sugar to the dough. It has a filling of brown sugar, sesame paste and osmanthus flower. When the buns are formed, they are slapped onto the inner wall of a clay oven, much like Indian naan.

The soft and sweet sugar huoshao is still quite popular today in Beijing for breakfast. 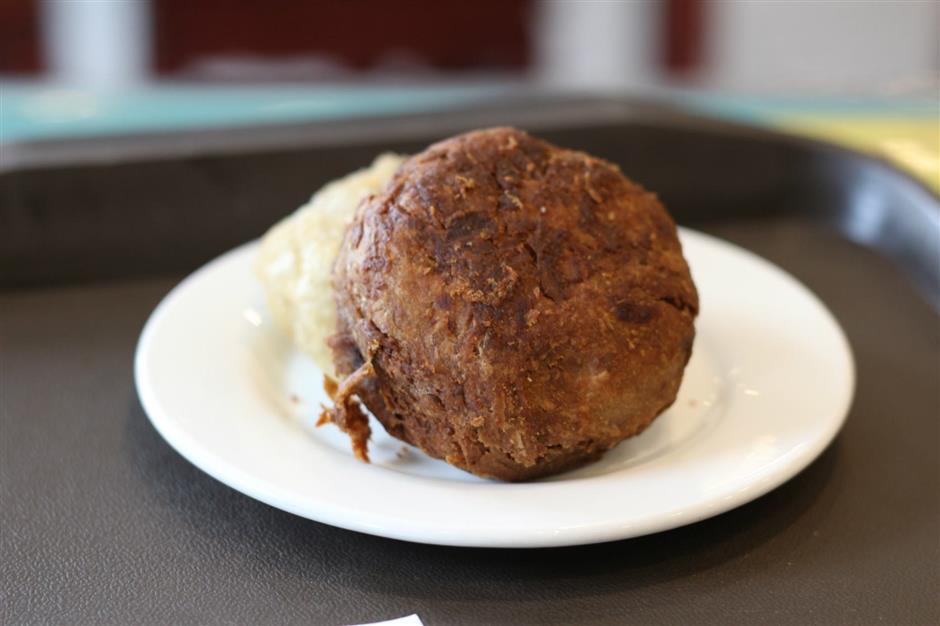 Guokui, a large round baked bread with a quite hard texture, is one of the most popular staples in Shaanxi Province that became prominent in the Qin Dynasty (221-206 BC).

The diameter of guokui can reach 65 centimeters and it’s very thick and dense because the dough is unleavened. Sometimes salt, grounded peppercorn tree leaves, five spice powder and cumin powder are added.

The early guokui (called dunbing) was food for soldiers. Each guokui weighed around 2.5 kilograms with a diameter of 50-60 centimeters and was about 15 centimeters thick.

Two holes were made in each guokui and they were hung by string so soldiers could carry them on the front and back of their bodies.

In battle, the hard guokui also served as protection against arrows. The soldiers would then pull out the arrows and shoot them back.

Qianzhou guokui from Qian County is a notable variety. Legend has it that the workers who were building the tomb for Emperor Gaozong and Empress Wu Zetian of the Tang Dynasty (AD 618-907) faced a problem: Because there were so many workers, there was not enough time to prepare food for everyone, so they took the flour and used their helmets as a pan. It turned out to be delicious and can be stored a long time. 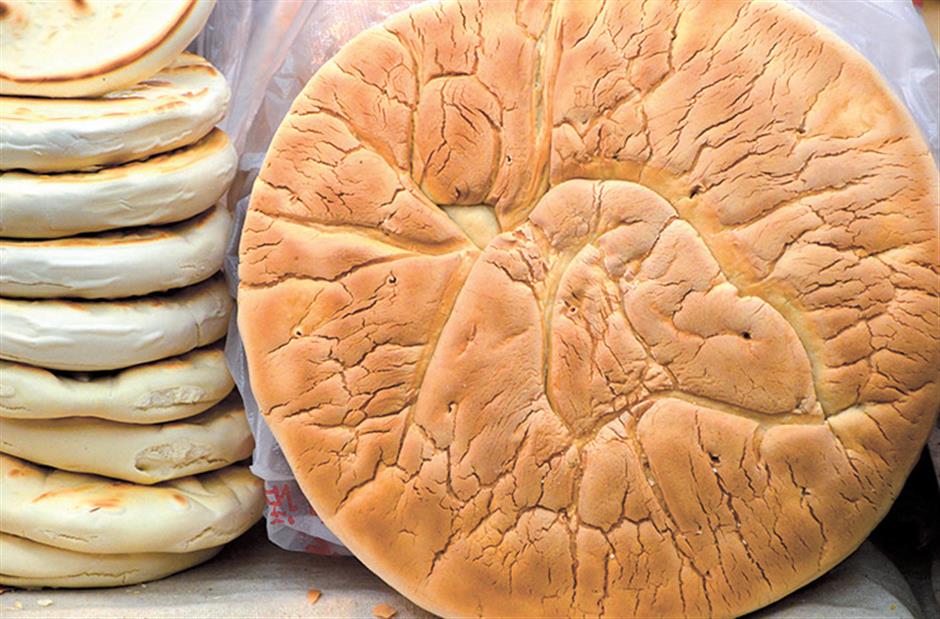 The diameter of a giant guokui can reach 50-60 centimeters.

In Sichuan Province, a popular street snack is guokui liangfen (bean jelly noodles). The small-sized baked bread is cut open to stuff in spicy cold bean jelly noodles, which presents two distinct textures in one bite. The bread is not as thick or dense as the Shaanxi guokui and more like shaobing. 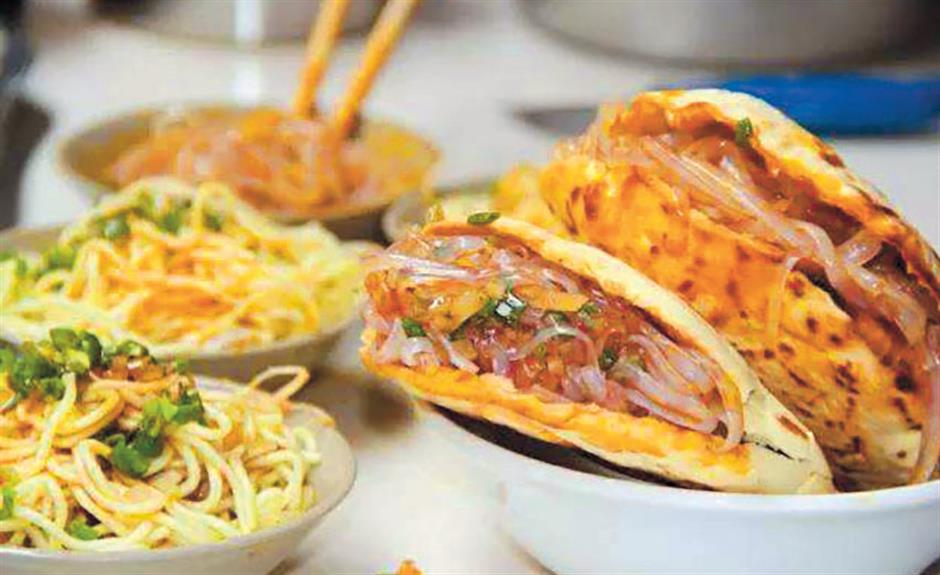 Guokui liangfen is a Sichuanese snack.

One of the most famous Shaanxi snacks is roujiamo, the marinated meat sandwich that’s often referred to as the Chinese hamburger. The bun of roujiamo is called baijimo, a plain baked bread made of semi-leavened dough. To make the perfect round shape, one can use the bowl to cut the rolled dough.

The name baiji has the same pronunciation as Baiji (白骥) Town where the bread originated, but baiji (白吉) is easier to write. 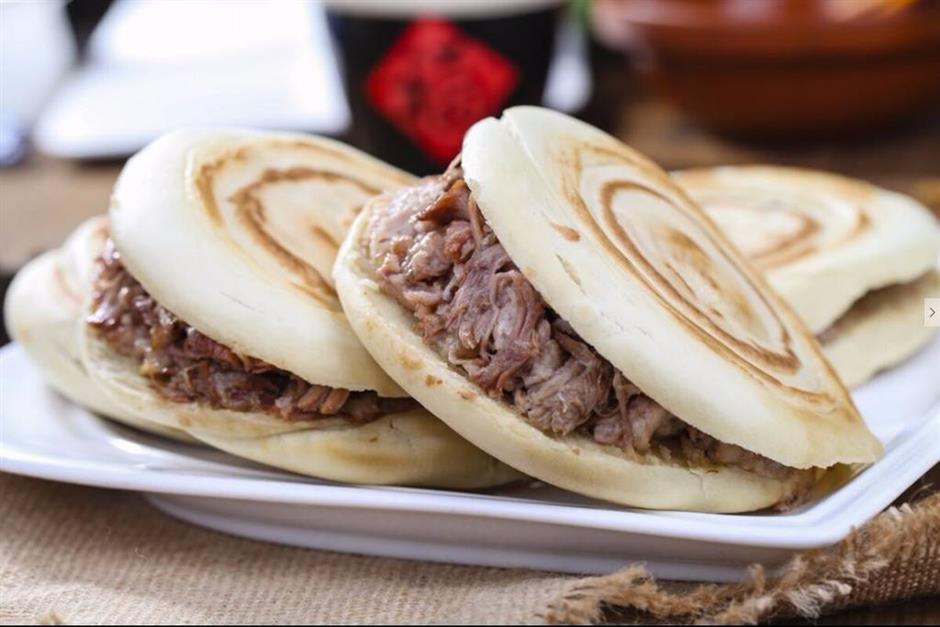 Roujiamo is a marinated meat sandwich.

A living fossil in Chinese cuisine, shizimo or stone bread from Shaanxi is a very basic staple — bread baked on hot stones.

Make the dough by adding oil, egg, salt and grounded peppercorn tree leaves, then cut into desired shapes and sizes. Bring small smooth stones and clean them before brushing on some oil and tossing into a deep pan until they become very hot.

Roll out the small dough pieces and place them on top of a layer of hot stones, then cover the top with another layer and cook them for 3 minutes.

The bread is thin with an uneven surface which is the result of the small stones.

It has been a tribute food in the imperial courts since Tang Dynasty.

There is another bread snack in Shaanxi called bangbangmo, which is quite similar to Italian bread sticks.

The dough flavored with salt and spices are cut into long strips and baked. 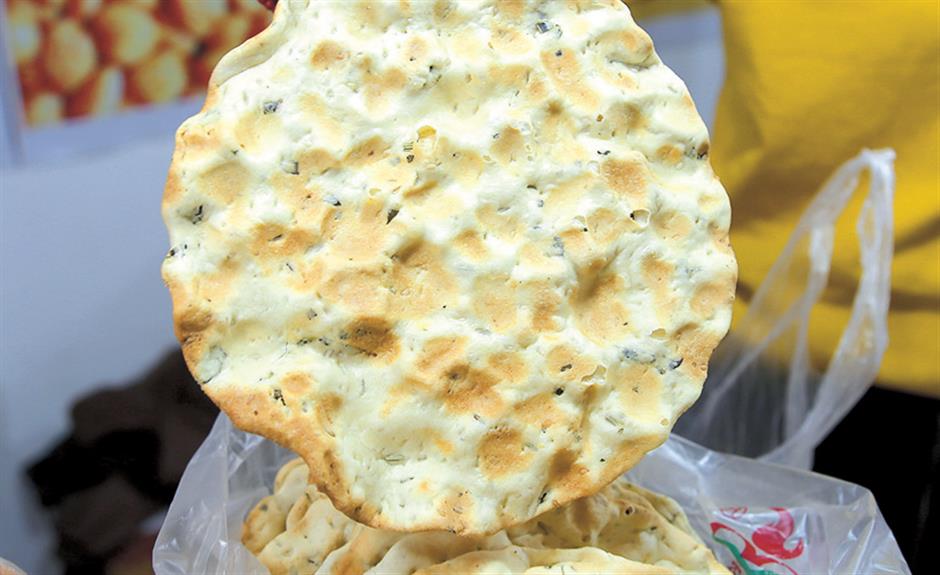 Stone bread is a living fossil in Chinese cuisine.