The Laba Festival is always a big day for the residents of Hangzhou. It is at this time of year that the Buddhist temples of Lingyin, Jingci, Faxi, Xiangji and Yongfu take it upon themselves to hand out free Laba congee to schools, orphanages and nursing homes for the seniors.

Eating Laba congee is an ancient tradition that traces its origin to Sakyamuni. To commemorate Buddha’s enlightenment, temples traditionally offer congee made of glutinous rice, millet, sorghum, red beans, lotus seeds, chestnuts, peanuts, jujubes and other ingredients on the eighth day of the 12th month on the Chinese lunar calendar.

The preparation work often starts on the first day of the 12th lunar month, where quality ingredients are imported from all over the country. The goji berries come from the Ningxia Hui Autonomous Region, jujube berries are picked from Cangzhou of Hebei Province, while preserved longan pulp is selected from Fujian Province. 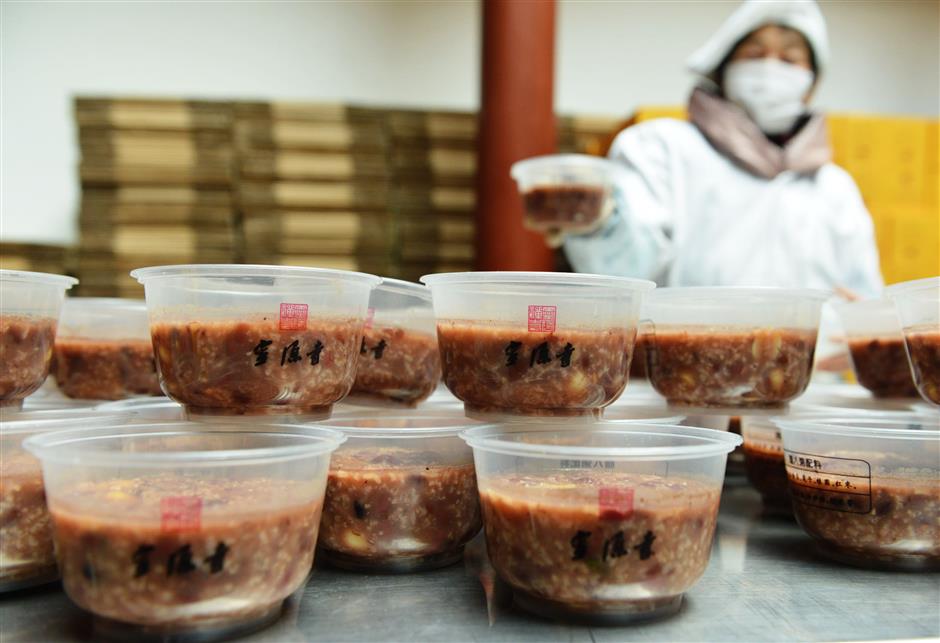 Most of the packaged congee is sent to railway stations, residential communities, schools, orphanages and nursing homes.

In Lingyin Temple, six big caldrons are constantly on 24 hours a day, producing up to 40,000 bowls of congee every day. Volunteers have to stir the food, without a break, for at least six hours until a caldron of congee goes al dente and mellow.

To avoid overcrowding and safety hazards around the temples, most of the packaged congee is sent to railway stations, residential communities, schools, orphanages and nursing homes. This year, Lingyin Temple also sent congee to 298 charity organizations and units, bringing relief to people in need.

Laba congee may be seen as an ancient dish but it is still popular today with Hangzhou natives. The plain porridge meal is often taken as relief for an upset stomach.

Hangzhou was once dubbed the “southeastern Buddhism country” thanks to its dotted temples, grottoes and stone-carved scriptures. And it is believed the Laba tradition dates back to the Song Dynasty (960-1279) when throngs of believers flocked to the city to burn incense at festivals to pray for harvest and good luck.

In 2016, Lingyin Laba customs were listed as intangible heritage in Hangzhou, while in 2017 it was included in Zhejiang Province intangible heritage list. Now, the temple is applying for a national heritage title. Its final goal is to be approved by the UNESCO.

Ever since the Five Dynasties and Ten Kingdoms period (AD 907-979), Lingyin has been known for its magnificence and its association with the royal court, prominent monks and intellectuals. 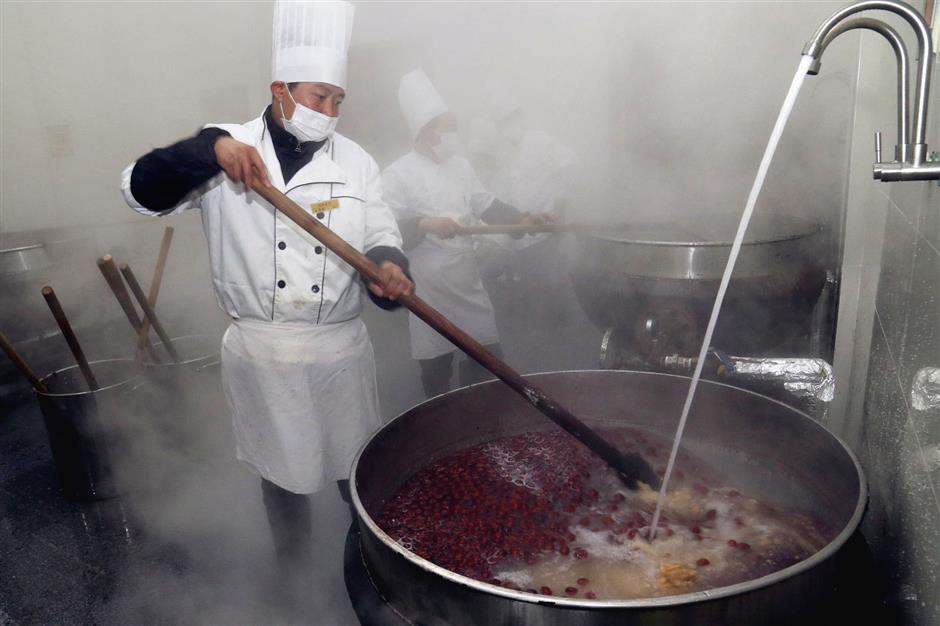 A volunteer stirs the food for at least six hours until a caldron of congee goes al dente and mellow at the Lingyin Temple.

In ancient times, the monks begged for alms along the streets and then preserved the remnant food ingredients. On Laba day, they cooked the conserved food into congee and returned the favor to its people.

Authentic Lingyin-style congee comprises of 12 varieties of grains, nuts and pulps. They are simmered according to a certain proportion. During the past five years, around 300,000 free bowls of congee have been given away.

Temples are not the only establishments to give away free bowls of congee, many time-honored traditional Chinese medicine pharmacies also offer free Laba congee every year.

The process of making Laba congee is a bit time-consuming but worth the effort if you want to try at home. First, you need to remember never to stew the food ingredients together. Put them into the pot one by one. The congee should be braised over a big flame for five minutes every time a new ingredient is added. Keep stirring to prevent them sticking to the pot and then heat over a medium flame for 10 minutes. All of these procedures should be repeated until the congee becomes sticky and fragrant.