Chinese cheese, if you please

At the cheese counters in supermarkets, one can only find imported cheeses that are mostly from Europe, ranging from cheddar to parmesan and goat cheese to blue cheese. Original, indigenous Chinese dairy products seem to be missing from the party.

The Chinese people have a long history of consuming dairy products similar to Western cheeses, especially in regions where animal husbandry is the dominant industry and dairy is an important element in their cuisine.

Rushan and rubing are among the most prominent Chinese cheeses. Traditionally made by the Bai people in Yunnan Province, rushan is called yenx seinp or nvxseiz in the Bai dialect and rubing is known as youdbap.

The Bai people mostly live in the Dali Bai Autonomous Prefecture. The Erhai basin has fertile lands where crops such as rice, wheat and beans are grown, while the Dongchuan District under the jurisdiction of Kunming and Eryuan County in the north of Dali have rich meadows and grasslands providing an ideal environment to raise cows.

Sheep and goats are raised in Dali’s Jianchuan and Heqing counties where there are more hills.

The Chinese word rushan directly translates to milk fan, while rubing, milk cake. The two cheeses have very different ingredients and appearances. To make rushan, the thin, long sheets of cream-colored cheese, fresh cow’s milk is warmed in a wok, then acid water is added so the milk curdles. Stirring the milk will quickly separate it into curds and whey. 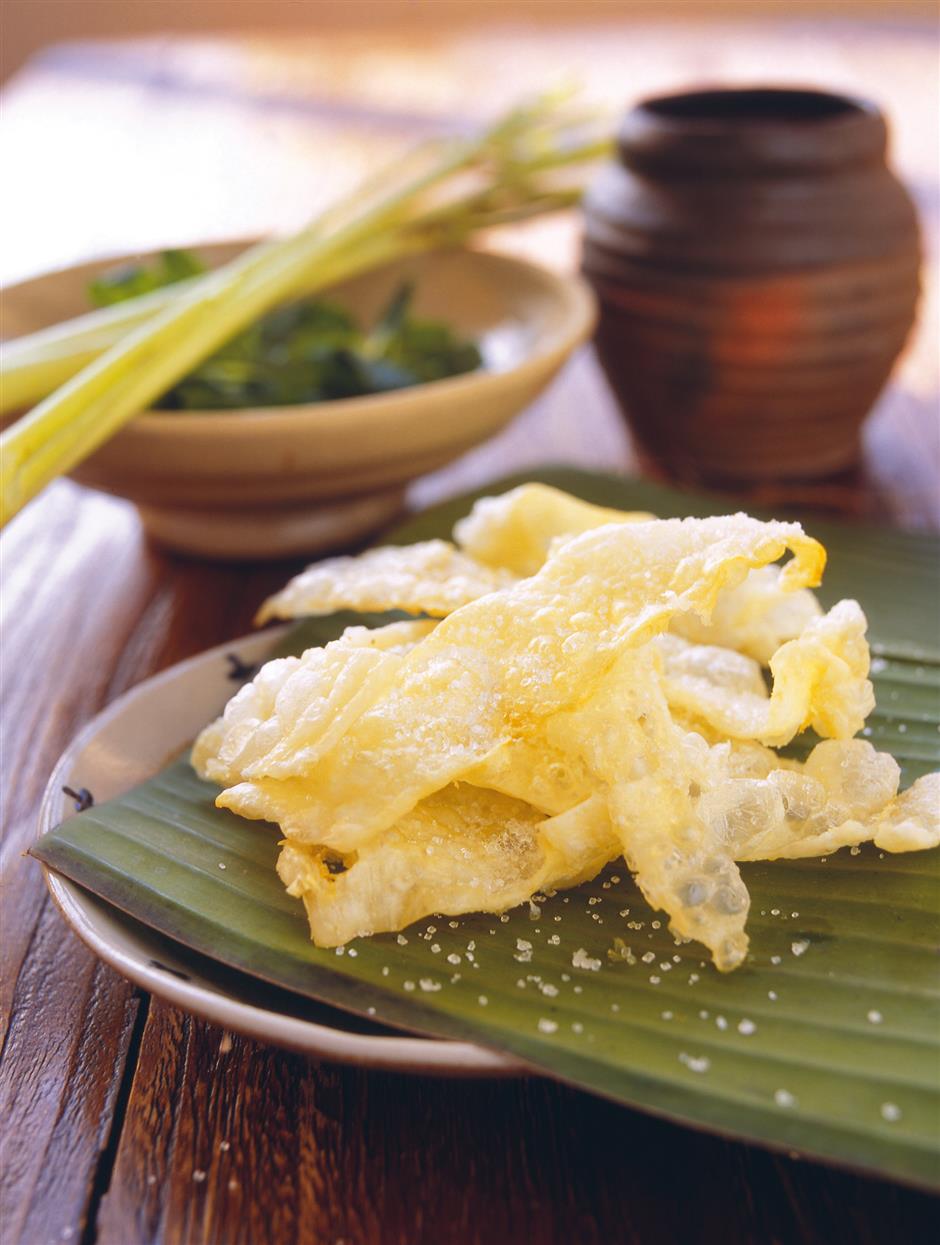 The warm curds are then pulled from the wok with chopsticks and shaped into cakes by hand before being rolled around sticks and stretched into a fan shape.

Locals usually deep-fry rushan because the puffed-up cheese becomes light, crispy and meltingly delicious. Rushan can also be eaten raw or cooked with other local ingredients such as Yunnan ham in stir-fry style. Dried rushan is covered with a wet cloth for 20 minutes so it softens, then it’s sliced and added to the wok with leeks, pork or ham, mushrooms and green peppers, seasoning with salt and sugar.

Rushan is one of the key ingredients in the three-course tea ceremony of the Bai people, which emphasizes three flavors with each course — bitter, sweet and meaningful aftertaste. The second course adds rushan, brown sugar and cinnamon to create a sweet tea that symbolizes the satisfactions in life. 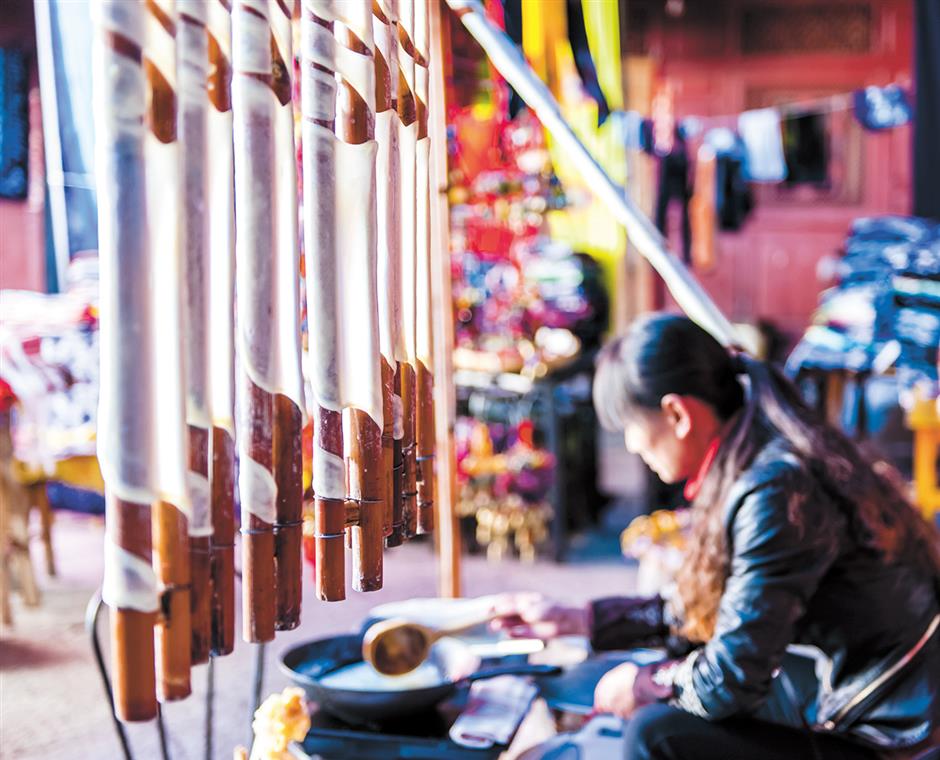 Rushan, the thin, long sheets of cream-colored cheese, are rolled around sticks and stretched into a fan shape.

Unlike rushan, which can only be made with cow’s milk, rubing can use either cow’s or goat’s, and the latter is actually more traditional. The word youdbap means “goat’s milk” in the Bai dialect.

First, the goat’s milk is boiled. After removing it from the heat, a souring agent is added so the milk curdles. The souring agent, known as naiteng, is made from a cultivated vine. Then the milk curdle is heated to speed up the process of division into white curds and yellow whey.

The curds, which look and taste like cottage cheese, can be eaten as a treat by adding sugar.

The curds are scooped up and poured into a cloth which is then tightly pressed to squeeze out the whey. Then the cube of cheese is pressed between two rectangular pieces of wood for several hours to remove the liquid, leaving rubing looking like tofu and ready to eat. It can be enjoyed directly with sugar or spiced salt, or deep-fried as a snack.

Today, rushan and rubing are not only eaten by the Bai people. One can find dishes made of the two cheeses in restaurants that serve Yunnan cuisine. 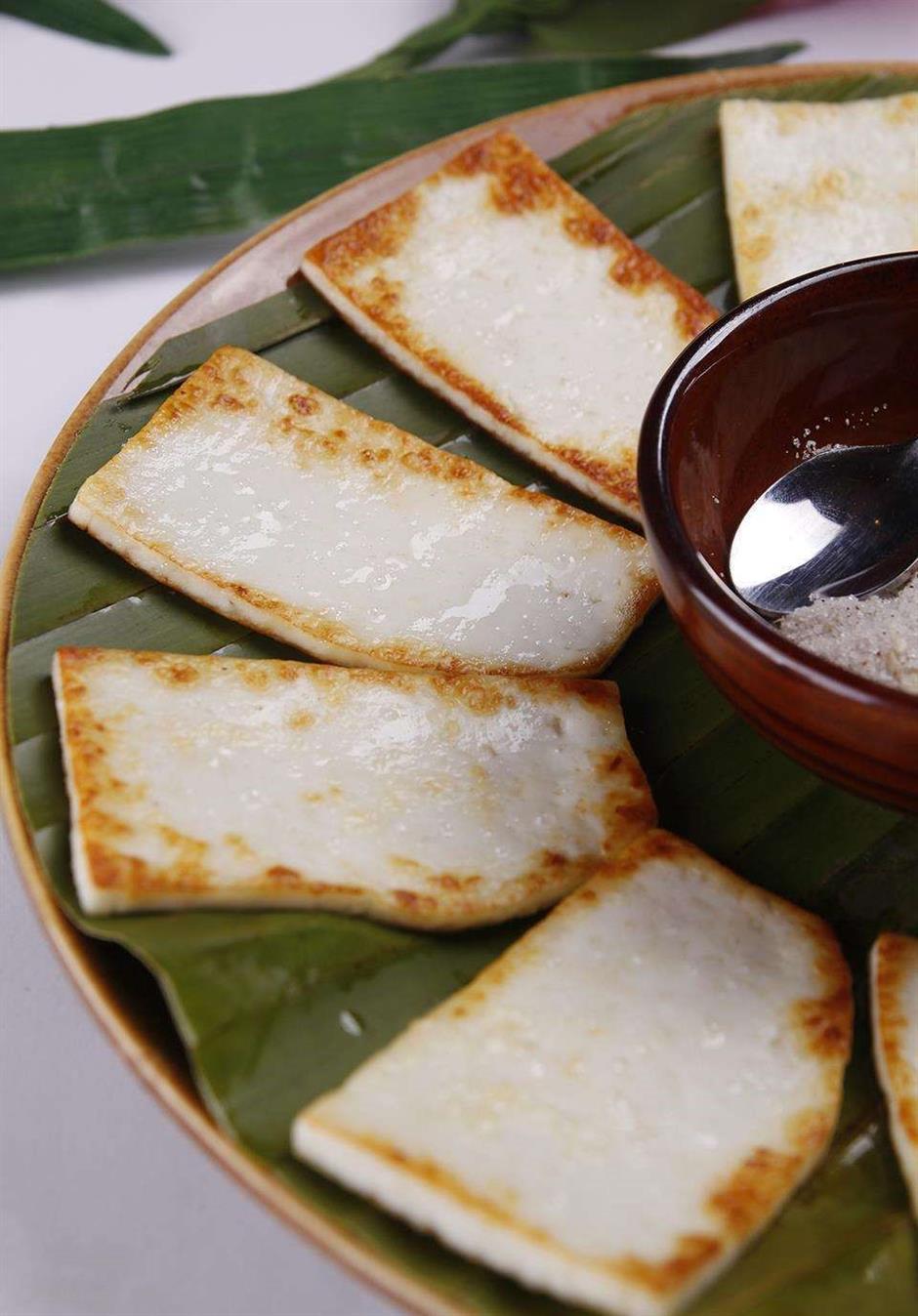 Rubing is more commonly made of goat's milk.

Home to vast grasslands, Inner Mongolia is also famous for beef, lamb and dairy products. When guests arrive at a herdsman’s home, which is usually a Mongolian yurt, they are greeted by an array of milk skin, milk cakes, cheese and milk tea.

Mongolians traditionally make cheese using cow’s milk and occasionally substitute it with sheep’s milk. A local staple is aaruul, a dried and often sweetened variety that often takes the shapes of small worms or square cubes.

To make aaruul, the milk is curdled and the curds wrapped in fine cloth to let as much liquid as possible drip out.

They are then pressed into the shape of a cake using two wooden boards weighted down with stones. The solid cheese is then cut into smaller pieces and arranged on wooden boards to dry in the sun, a process that usually takes place on the roof of the yurt.

The dried cheese can be preserved ceremony for a long time because as much moisture as possible has been removed. One can simply chew the aaruul as a snack, which tastes sweet and sour like yogurt. The cheese is a necessity for nomads because it provides rich nutrients.

Packaged aaruul snacks can be found in supermarkets or purchased online, with fruity flavors also available. 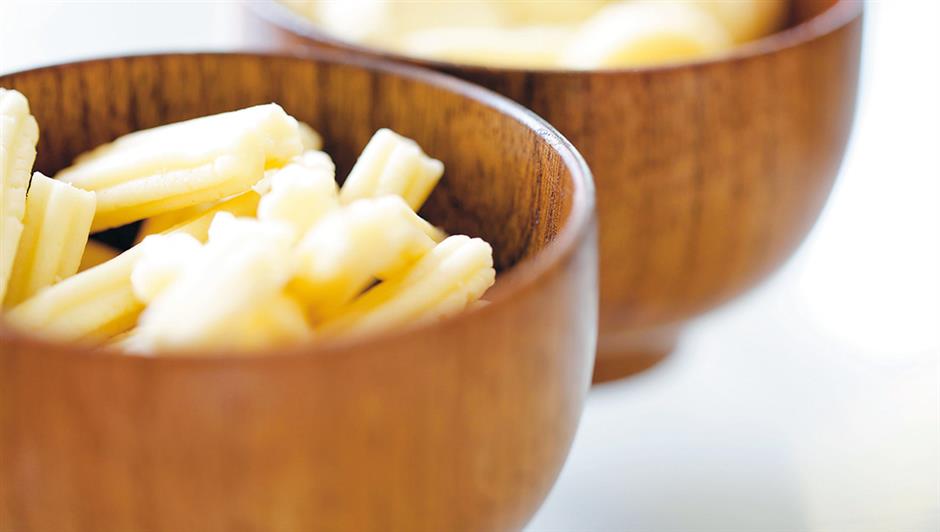 Byaslag is another mild, unripened Mongolian cheese that takes the shape of square cakes.

It’s made by boiling the milk and adding a small amount of kefir so the milk curdles before the liquid is drained and the curds pressed between wooden boards. The byaslag can be eaten directly, soaked in tea or served with soup.

In the Tibet Autonomous Region where dairy is a main component of the local cuisine, one can find the unique yak cheese that’s quite hard to chew. It’s made of skimmed yak milk, a leftover from making yak butter, which is heated to 50 to 60 degrees Celsius before adding yogurt. After removing the whey, the curds are then dried to make the hard-textured cheese.

The Tibetan people like to put yak cheese in yak butter tea, eat it as a snack or enjoy it with zanba, a staple made of roasted barley flour. On the cold, high-altitude plateau, yak cheese could replenish energy and provide protein.

Tibetan butter tea is a local specialty that blends butter made from cow’s, yak’s or goat’s milk, which is similar to Western butter with very strong tea. The butter can also be used to make breads and cakes.