Sure, every foodie loves tacos and enchiladas. But what about lesser-known Mexican classics like “cochinita pibil,” the impossibly flavorful, slow-roasted pork dish from the Yucatan peninsula? Or “escamoles,” the ant larvae from central Mexico known as “insect caviar”? Or “empanadas de mole,” pastries filled with the savory chocolate sauce of the Oaxaca region?

Mexico has always been a major player on the world food scene. But increasingly, top chefs are embracing and promoting the country’s richly varied regional cuisine, driving the Mexican gastronomic experience to a whole new level.

One of the poster boys for the trend is Alejandro Ruiz, whose Mexico City restaurant Guzina Oaxaca drew a rave review in The New York Times with its “chic interpretations of traditional classics.”

Ruiz comes from the village of La Raya in the southern state of Oaxaca, where he grew up grinding corn and cooking for his family to help his mother, who worked full-time washing clothes.

His restaurant, which opened in 2014, is a celebration of his home state, a mountainous region known for its huge diversity of ingredients and deep culinary traditions.

“Where I come from, the kitchen is the most important part of the home,” Ruiz said. “What I do (in the kitchen) is who I am, it’s where I was born, it’s my mother’s milk. It’s in my DNA. What’s my identity? Oaxaca.”

Oaxaca isn’t the only region whose traditional cuisine has been elevated to new levels of chic. 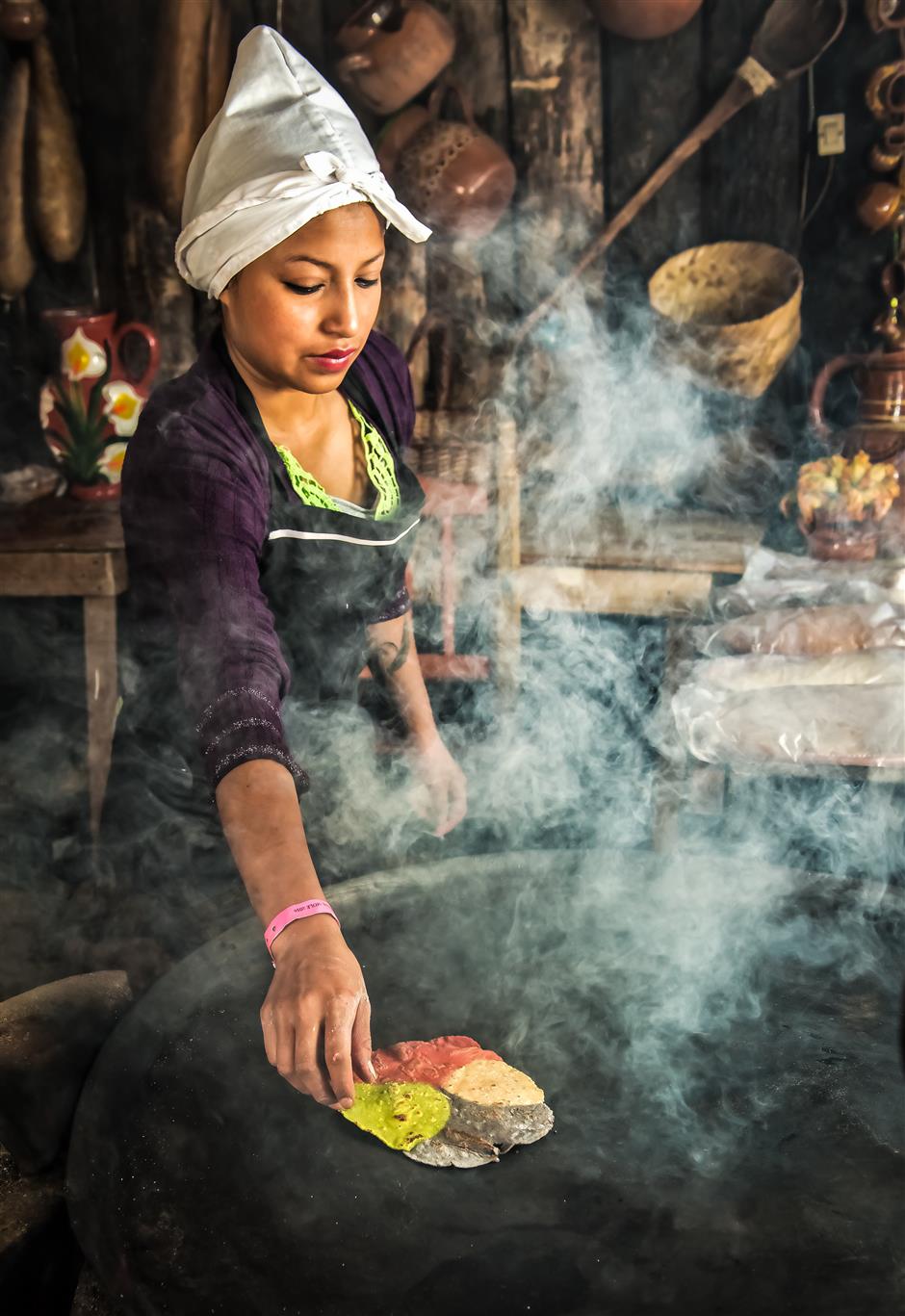 Dana Paola Alvarado makes a four-color tortilla, made with red, white and blue corn and nopal (prickly pear), during the Mole Fair in San Pedro Atocpan, Milpa Alta borough, Mexico. Mole is a Mexican sauce of pre-Hispanic origin made out of 26 basic ingredients cooked according to traditional recipes.

Mexico stretches from the deserts of the northern border to the tropical forests of the south, with long Caribbean and Pacific coastlines in between, giving it immense biodiversity and a sprawling palette of ingredients.

Its flavors are also shaped by its complex history, blending influences from its many indigenous groups, the Spanish conquistadors, European elites, slaves from Africa, immigrants from all over and the ever-present United States.

Laura Siciliano-Rosen, co-founder of the food blog, Eat Your World, loses count listing her culinary adventures in Mexico’s myriad regions and sub-regions. Dining in Mexico, she says, one minute you can be eating sinfully delicious tacos. Then, a few hours by bus — or a few Mexico City blocks or market stands away — “suddenly you’re eating turkey and hardboiled eggs and these really rich pastes, ‘recados’ from the Yucatan peninsula, which is just a whole other level of flavor that only exists there.”

Mexican food’s strength is its “regionality,” she says — something that is only just starting to be exported abroad.

“The more people are learning about the regionality of the cuisine and how distinct and complex it is, the more they’re blown away, like ‘Wow, this is real Mexican food,’” she said. 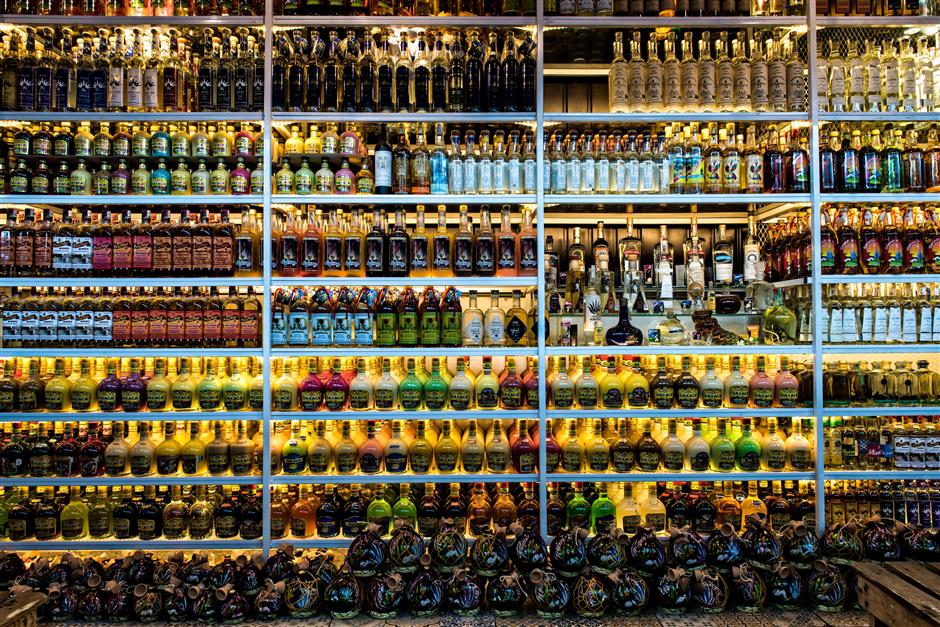 A selection of fine mezcal bottles from a range of Mexican producers are displayed for sale at Benito Juarez market in Oaxaca, Mexico.

William Drew, of the prestigious World’s 50 Best Restaurants list, says this is exactly what has propelled Mexican restaurants onto the closely watched ranking.

“The diversity is extraordinary,” he said. “If you think you know what Mexican cuisine is, then you probably haven’t experienced enough of it.”

Mexico has two restaurants in the current top 50, which remains dominated by Europe: Enrique Olvera’s Pujol and Jorge Vallejo’s Quintonil, both in Mexico City. But Mexico’s top chefs are nervously eying their colleagues to south, in Peru — whose fusion-fueled cuisine makes it a rival contender for the title of Latin America’s hottest food destination.

Peru’s mix of Andean, European and Asian influences — symbolized in recipes like “ceviche,” a refreshing dish of raw fish marinated in lime — has made its cuisine all the rage.

Peru has two spots on Restaurant’s current top 10: Virgilio Martinez’s Central at No. 5, and Mitsuharu Tsumura’s Maido at No. 8.

The top Mexican restaurant, Pujol, comes in at 20. That is making some people in Mexico nervous.

Mauricio Avila works at the Mexican culture ministry. His job is to compile and preserve Mexico’s gastronomic heritage.

“Mexicans love food, and we’re proud of our food, but we don’t advertise it. We’ve always believed it wasn’t fancy enough for foreigners,” he said.

His office is actively encouraging the trend of celebrating Mexico’s traditional regional cuisines. 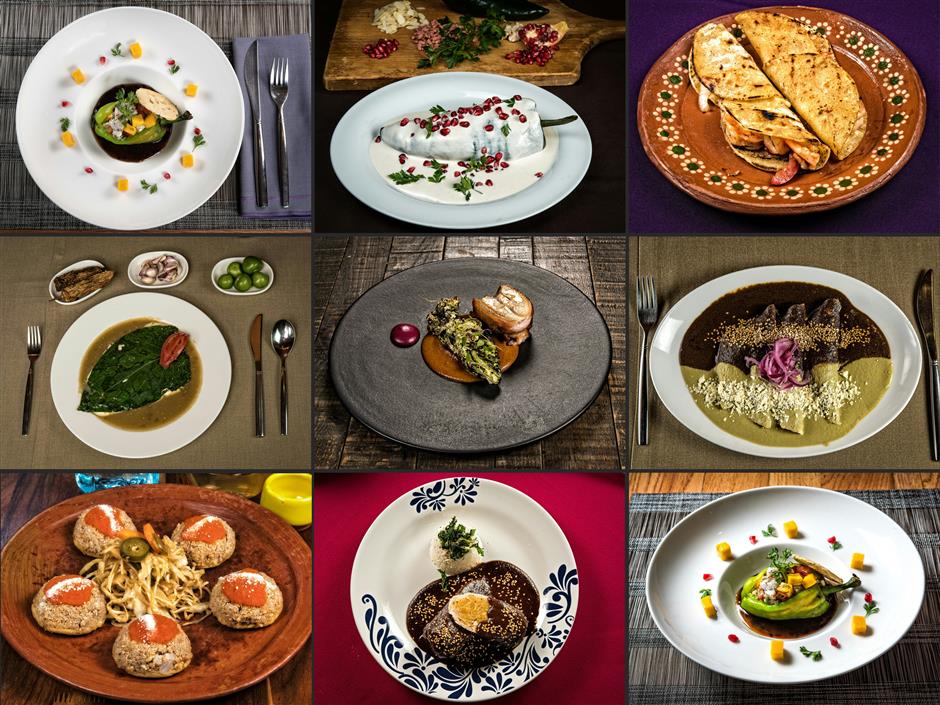 A selection of Mexican specialties

The government has released a 78-volume collection on “Indigenous and Popular Cuisine” — each dedicated to a place, an ingredient or an ethnic group. It is also working on an index of ingredients.

Sasha Correa, a Venezuelan gastronomy expert at Spain’s renowned Basque Culinary Center, says Mexico has an allure all its own.

“In a short time, Mexico has not only joined the phenomenon (of high-end dining in Latin America), it has done it with force, personality and a lot of distinctive elements,” she said.

And pity the misguided foodie who travels to Mexico City and only eats in trendy restaurants, when it is bursting with amazing food at nearly every street corner.

“An ideal trip to Mexico City is doing a mix” of the two, says blogger Siciliano-Rosen.

“But if you can’t do the high-end, just do the low-end 100 percent, because there’s so much variety, it’s so accessible, and you can try anything and it’s all going to be good.”