A vegetable to inspire the poets

“Rises from the mud yet remains unstained, bathes by pure currents but shows no coquettishness.”

This verse from “On the Love of the Lotus” by Song Dynasty poet Zhou Dunyi (1017-73) describes the beautiful lotus flower, a symbol of innocence, nobleness and modesty in Chinese culture.

The aquatic plant is a frequent theme in Chinese poetry, and the category is collectively referred to as lotus poems. The peak season to enjoy blossoming lotus flowers is in August. 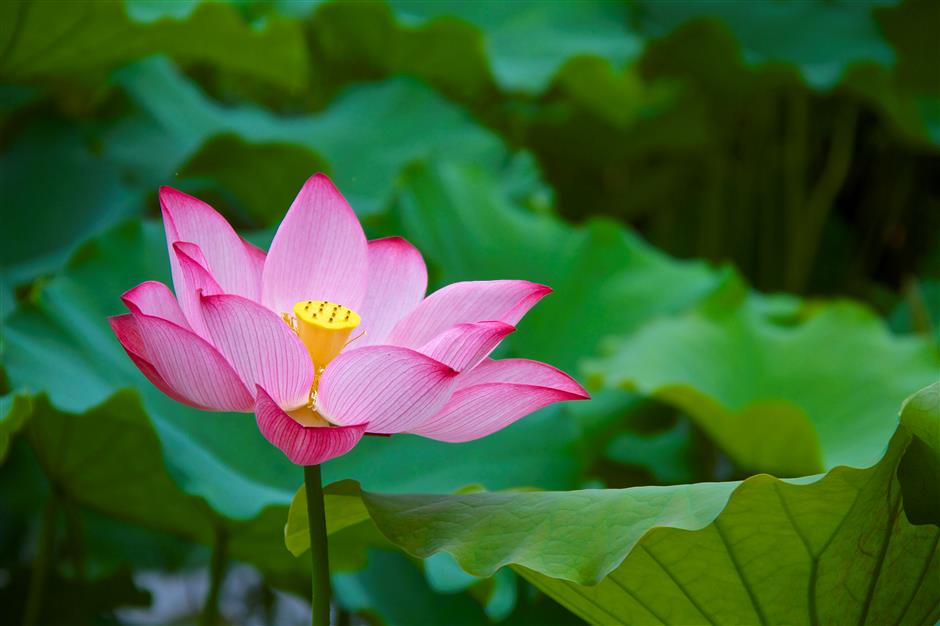 Lotus flower is regarded a symbol of innocence, nobleness and modesty in Chinese culture.

In Chinese culinary tradition, the lotus also has a significant role. Almost every part of the lotus, from the seeds to the flowers, can be cooked and eaten. The plant is widely distributed across India and China.

It’s important to know that the lotus is best cooked before eating, as aquatic plants that grow in mud have a higher risk of parasite transmission.

The root, or rhizome, of the lotus, is called ou in Chinese, and it’s among the most common vegetables eaten across the country and available all-year round, though the peak season is generally in the autumn.

The white and slightly yellowish root vegetable is naturally crunchy with a slight sweetness. Nutritionally, the lotus root is a very beneficial vegetable, as its iron and copper can improve blood circulation. Its rich dietary fiber can aid digestion and it’s also packed with vitamin C. The vegetable is also low calorie and great for weight management. 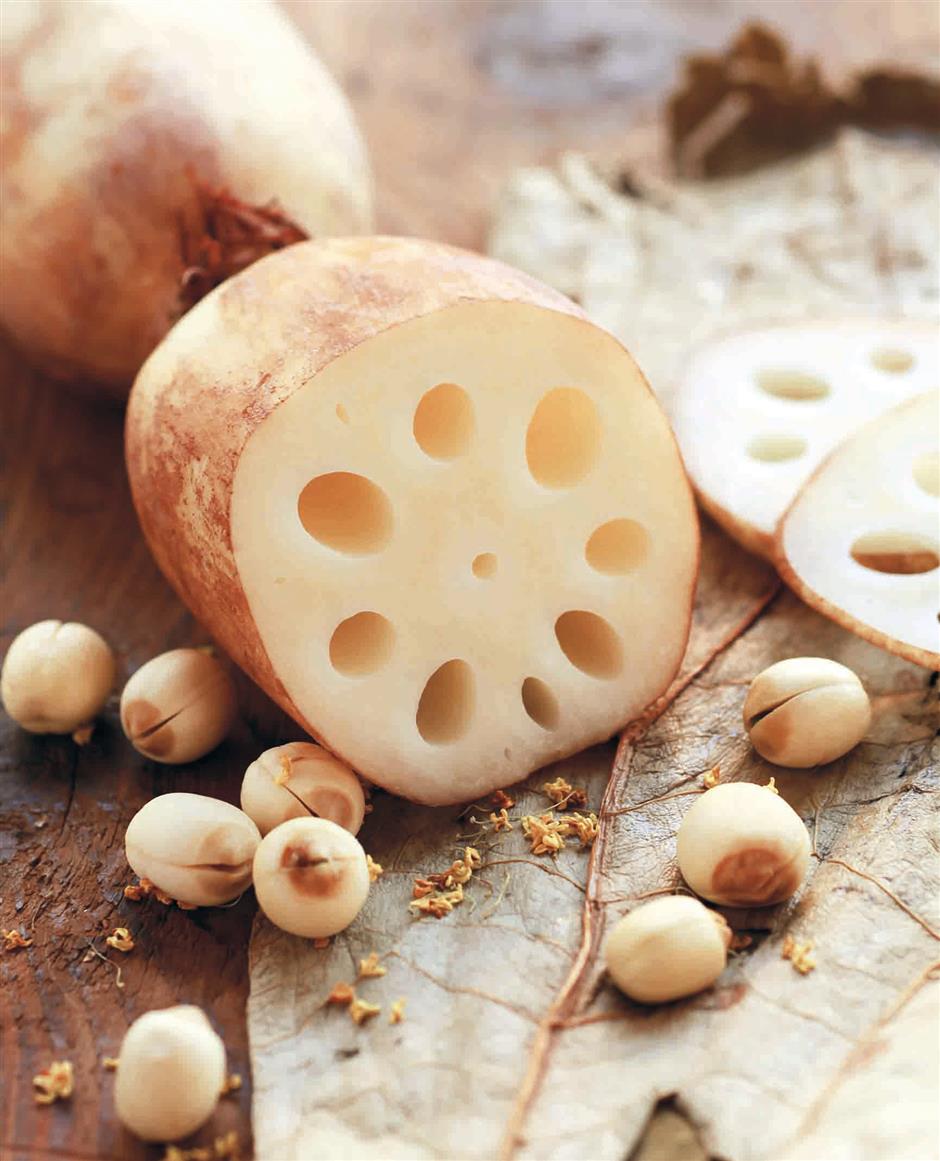 Lotus root is among the most common vegetables eaten across the country.

There are lots of ways to prepare lotus root, both savory and sweet. Different cultivars of lotus root have different textures, some are extra crunchy and some become soft and starchy after cooking. So ask vendors in the market about the best way to cook that specific batch of lotus root.

Because it grows in the mud, the lotus root is quite dirty. To clean it thoroughly, wash the exterior to remove the dirt, then peel off the skin, cut off both ends and rinse in water again.

When exposed to the air, the lotus root will brown very rapidly. To prevent this, soak the sliced lotus root in water before cooking.

Lotus root salad is a quick cold dish that highlights the texture of the vegetable. First, blanch thinly sliced lotus root in boiling water to cook the vegetable, it takes 1 to 2 minutes depending on the amount of vegetable in the pot and the thickness of the slices. Drain and add a little bit of white vinegar so the lotus root maintains the white color. Set aside and let it cool.

The sweet and sour flavor is very appetizing in the hot summer and it works wonderfully in lotus root stir-fry. Cut the lotus root in small dices or strips, blanch in boiling water and quickly stir-fry with sugar, vinegar and soy sauce. The dish can also be hot and sour using chili oil and vinegar. 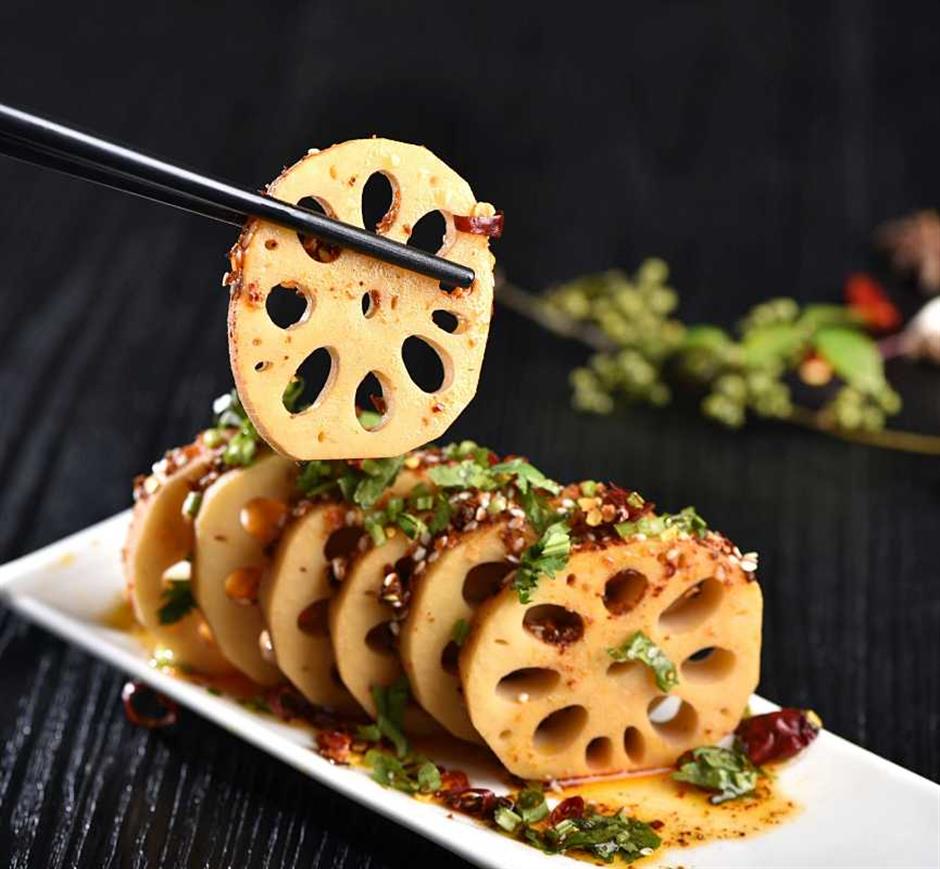 Meanwhile, the starchier varieties of lotus root are ideal for cooking in soups and stews, like the classic lotus root and pork rib soup. The vegetable can bring a natural sweetness while gaining rich flavors from the meat.

Glutinous rice stuffed lotus root with osmanthus sugar glaze is a classic southern sweet cold dish. Make sure to ask the vendor for a lotus root that is evenly shaped, has larger holes and softens when cooked.

The glutinous rice is soaked in water for about 30 minutes, then rinse and peel one segment of lotus root and cut off one end only. Stuff the glutinous rice in the holes and push with a chopstick to make sure they are evenly filled. Secure the end that’s cut off with toothpicks and cook the entire thing in a pressure cooker in water with brown sugar and rock sugar. The brown sugar not only adds a sweet flavor but also colors the lotus root to become a beautiful brick red.

It takes around 50 minutes to cook the lotus root, then let it cool and slice before serving. Drizzle some osmanthus sugar glaze or honey for a glossy presentation and sweeter taste. The dessert can be paired with sweet osmanthus wine. 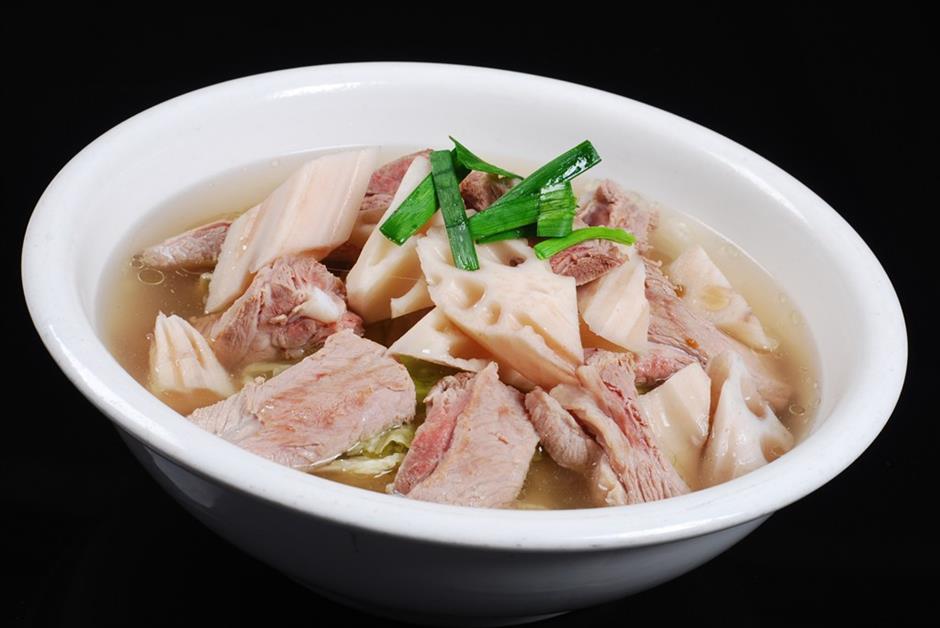 Deep-fried pork stuffed lotus root is a popular street snack. The mini lotus root sandwich stuffs minced pork seasoned with scallion and ginger between two thin slices of lotus root, which is then battered and deep-fried. The snack can be served with ketchup or peppercorn salt.

Because the lotus root contains starch, it can be finely chopped and seasoned to make vegetarian meatballs or added into dumpling fillings for some crunchiness. 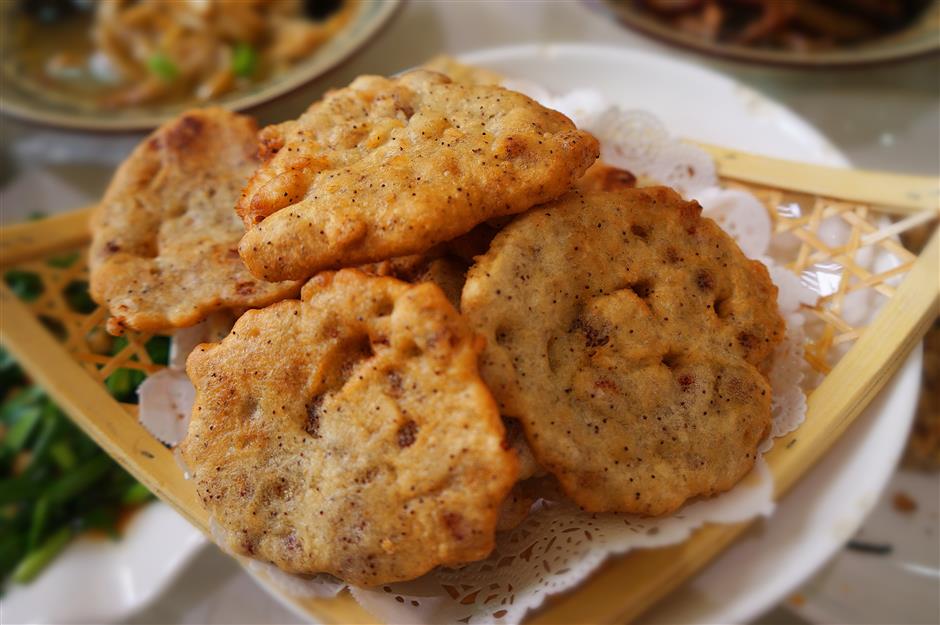 In summer, the baby lotus root known as oudai (lotus belt) is a seasonal delicacy. The tender, asparagus-like vegetable is very common in Hubei Province, which is known for various lotus dishes.

The tender roots have a very delicate texture and are often stir-fried with chili and vinegar. There’s no need to blanch the baby lotus roots before stir-frying as they cook very quickly in a hot wok.

The baby lotus roots are also made into pickles alongside chili pepper. 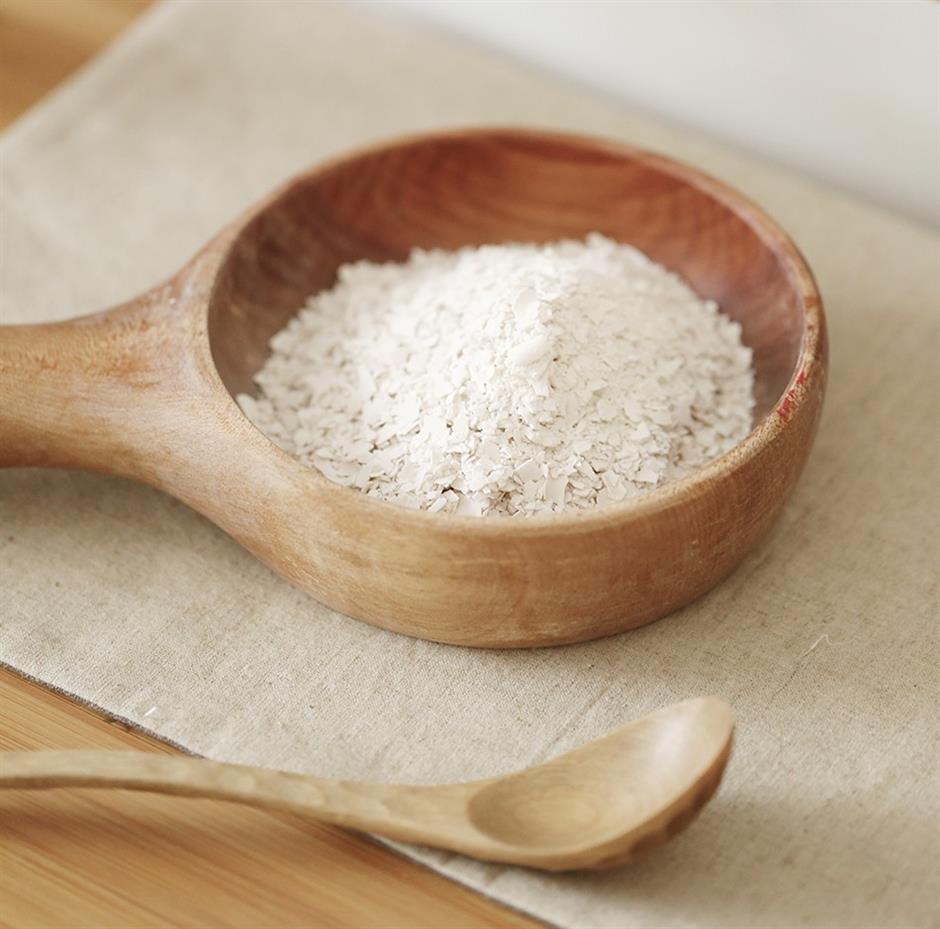 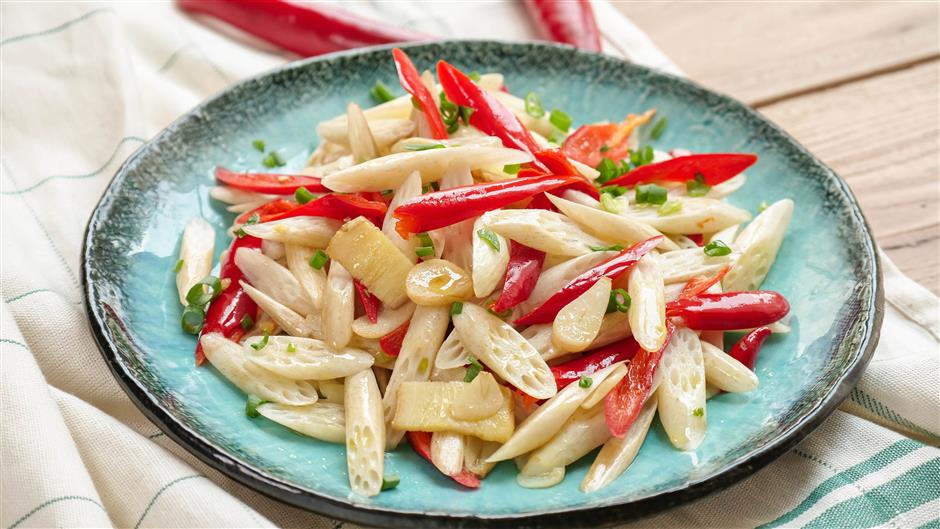 Although the extra-large leaves of the lotus are not typically eaten, they have versatile uses in cooking, like the traditional beggar’s chicken in Hangzhou.

The dish wraps chicken in fresh lotus leave and is sealed with clay, then baked until the meat is fully cooked. The lotus leaf helps the chicken retain moisture, so the meat is very tender, juicy and fragrant.

Chicken and glutinous rice wrapped in lotus leaf is a similar dish in Cantonese dim sum and it features a more diverse selection of ingredients such as dried scallops, shrimp, pork and egg yolks alongside chicken, all combined to offer a compound flavor.

The dried lotus leaf is soaked in water to regain moisture before it’s used as a wrapper. You can also substitute the chicken with pork short ribs. 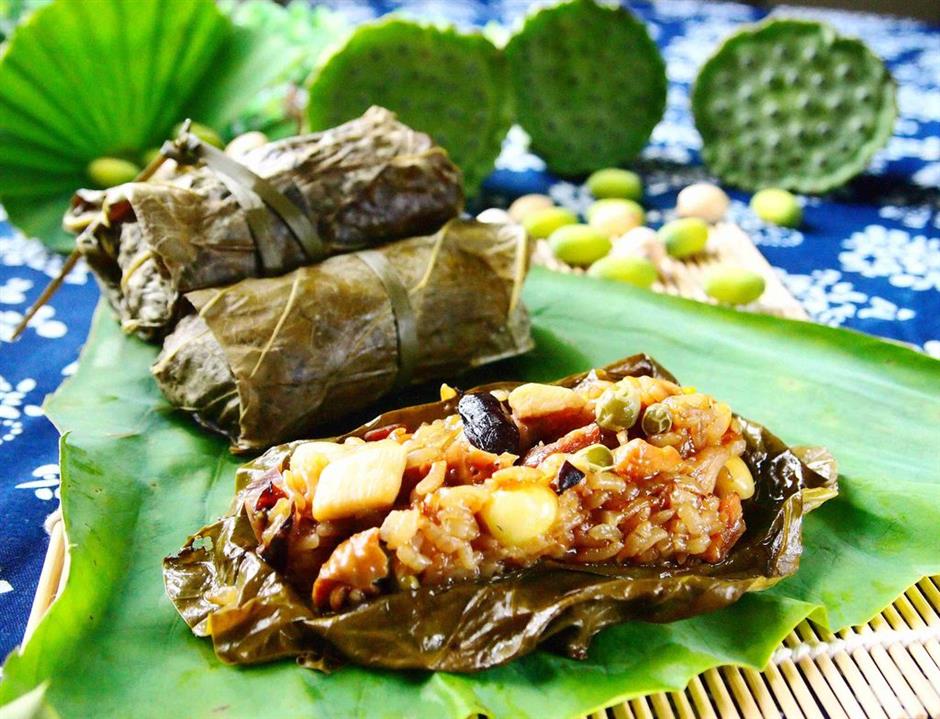 The dried lotus leaf is a herbal tea in traditional Chinese medicine with the benefits of relieving pressures, reducing swelling and losing weight. The tea can be served hot or cold.

The lotus leaf congee for the summer season is made of fresh or dried lotus leaf, the cooling property of which can cheer up the appetite.

The seeds of the lotus are consumed in various ways across China, and one of the most notable uses is the lotus seed paste as various pastry fillings, especially in mooncakes.

The lotus seeds are generally sold dried, and requires soaking in water for hours so they can become softer when cooked.

The seeds are also stewed with rice and grains to make sweet congees.

Fresh lotus seedpods are now sold in the market as a ready-to-eat snack.

The tenderer the seeds, the sweeter the flavor, and the bitter embryos can be picked out to make tea, though the beverage can also be brewed with dried lotus embryos. 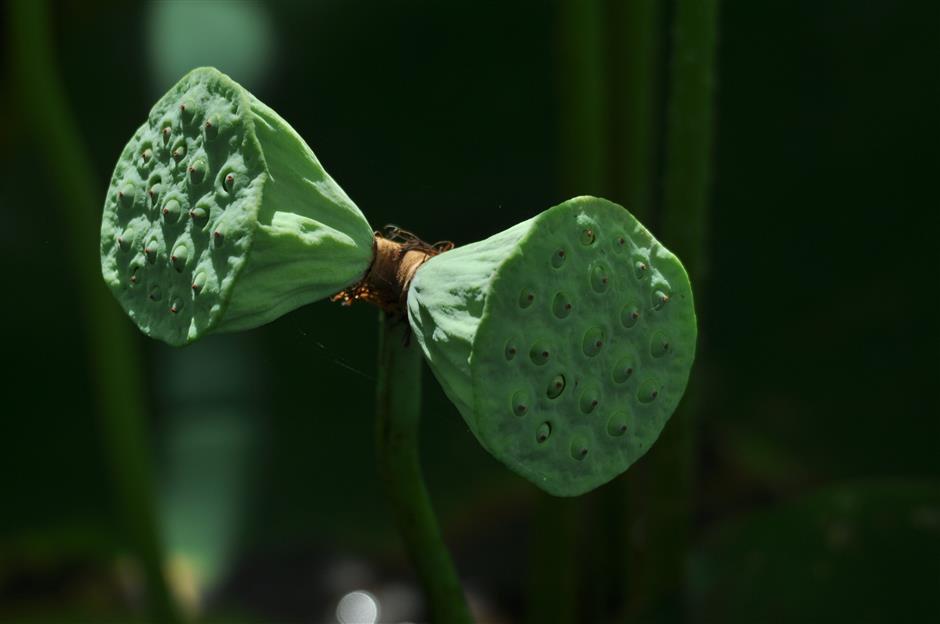