Valpolicella is a fine Valentine wine for romantics

Happy Valentine’s Day! A little more than a week ago I had the privilege to spend four days in one of Italy’s most charming cities, Verona. Home to Romeo and Juliet, the world’s most famous lovers, a case could be made that Verona is the most romantic city in Italy. What made the experience even more enchanting was attending the annual Anteprima Amarone festival to taste the newly released 2015 Amarone wines and older vintages. Before I introduce the indomitable Amarone, let’s delve into the real meaning of Valentine’s Day.

Historically, Valentine’s Day evolved from antediluvian fertility celebrations. In ancient Rome the Lupercalia festival of fertility was held in mid-February. With the advent of Christianity, the church sought to replace this pagan festival that featured animal sacrifices and explicit sexual displays with a more sedate and Christian observances. In the 5th century Pope Gelasius proclaimed February 14 as Valentine’s Day. But who was this legendary saint of love?

The Catholic Church recognizes three saints by the Roman name Valentinus or Valentine in English. How he actually became the patron saint of lovers is somewhat murky, but two tales may hold the answer. The first claims Valentine was an early priest who defied a marriage ban by Emperor Claudius II. The emperor believed single men made better soldiers for his legions. Tragically, Valentine was put to death for secretly marrying lovers. Another popular account claims he was imprisoned for helping persecuted Christians escape tyrannical Roman overlords. In prison he fell in love with his jailor’s daughter and just before he was executed he wrote her a note signed, “From your Valentine.” We may not know the definitive origin of Valentine’s Day, but we know it’s traditionally a day to honor true lovers. So amid the over-the-top, crass commercialism of the modern Valentine’s Day; how can we genuinely be romantic? Picking a romantic wine is a great start and no other wine does this better than Amarone. 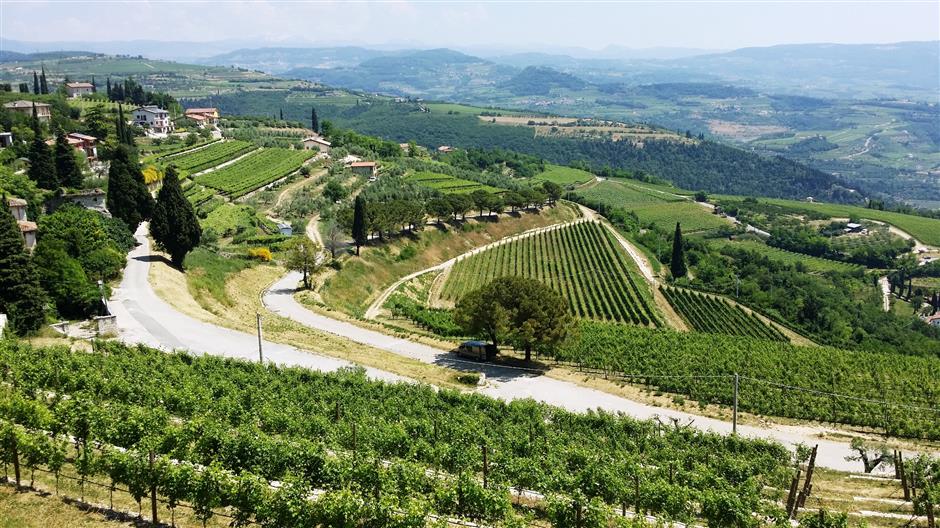 The sloping vineyards overlooking the valleys of Valpolicella

Over the past few years Chinese wine lovers have come to recognize Amarone as one of the world’s greatest wines but many still don’t know that Amarone is a Valpolicella wine. Last year, I introduced versatile and good value Valpolicella DOC wines but, as today is a special occasion for lovers, only the king of Valpolicella will do. Along with its queen Recioto, a sweet red wine, Amarone sits at the top of the Valpolicella quality pyramid with a unique style and story.

Viticulture has been practiced in the Veneto region since the time of the ancient Greeks, though the exact beginning of cultivation in the Valpolicella area is not precisely known. The tradition of using partially dried-grapes was known as the “Greco” or “Greek style” of winemaking, with its origins dating back to ancient times.

From the Renaissance to the 19th century, Valpolicella wines were among the most prized in Europe. This was especially true about the acclaimed sweet wines of the region that were made using the apassimento method to dry grapes. These wines eventually became known as Recioto della Amarone. Like many other sweet wines, the fermentation process was stopped to retain residual sugar. Legend has it that sometime in the early part of the 20th century, an absentminded winemaker forgot to stop the fermentation and all the sugar became alcohol and a new dry wine was born. I can’t defend the veracity of this tale but no one can doubt the superior qualities of Amarone wines.

The region of Valpolicella achieved DOC status in 1968. In December 2009, the Amarone della Valpolicella and Recioto della Valpolicella Amarone sweet wine received their own separate DOCG status. Since these milestones, Amarone and the other wines of Valpolicella have gone from strength to strength. Much credit for advancement in quality must be given to the Valpolicella Consortium that was founded in 1924. It includes the vine growers, winemakers and bottlers of the Valpolicella region. The consortium oversees and regulates almost every aspect of cultivation and winemaking and also helps with promotion.

All Valpolicella wines are made using the red Corvina variety that provides body and structure. Other important contributors are Corvinone and Rondinella, while a small percentage of other native varieties are also allowed. When making Amarone these grapes are dried in a cool room with good aeration for three months or longer until they have lost nearly 50 percent of their weight. The semi dried grapes offer very concentrated juice with abundant favors. After fermentation Amarone wines undergo several years of aging in large oak casks. Some producers use both small and large oak barrels to age their wines. The result is a wine that typically features an intense ruby red color, aromas and flavors of cherries, raisins and oak and a long smooth tannic finish. Amarone wines are also very age worthy.

This substantial wine demands equally substantial fare. In Italy this often means hearty meat roasts and stews, game or pungent cheeses. My favorite authentic Valpolicella dish is horse or donkey meat stewed for over eight hours in Amarone wine. Nice Chinese partners include Yinchuan or Inner Mongolian roasted leg of lamb and lamb ribs as well as Dalian-style donkey. The relatively high alcohol content of Amarone wines mean they are best enjoyed slightly chilled, about 16 Celsius, and should be allowed to breathe an hour or more before drinking.

Some of the best producers of Amarone have wines available in Shanghai. These include Valentina Cubi, Villa Canestrari, Santa Sophia, Latium, Tinazzi and Sartori.