No need to feel bamboozled by healthy wine craze

White wines, not of the distilled kind, are grossly underappreciated in China. This is not exclusively a China problem as red wines in many ways are more obvious and the preferred choice of new drinkers, especially men. As a taster’s palate develops, and especially when food paring becomes a priority, then white wines generally become more popular. I’m an ardent red lover but I admit that most dishes, including Chinese dishes, pair better with white wines. This is definitely the case with bamboo, the cover story topic of today’s iDeal section.

Edible bamboo shoots and white wine actually share some fascinating parallels. They are lightly colored, delicate in taste, versatile and have been a part of the human diet since the earliest of civilizations. Both are ideally harvested at night to ensure optimal freshness. Best of all they’re healthy and delicious.

The health benefits of white wines are commonly overlooked as resveratrol-rich reds have received all the attention. White and sparkling wine lovers felt left out of this healthy wine craze, but scientists and doctors are providing growing evidence that white wines may be equally healthy, albeit in different ways. A study by the University of Connecticut School of Medicine found that the tyrosol and hydroxytyrosol antioxidants in white wines are molecularly similar to those in olive oil and have similar health benefits. A study by the University of Barcelona indicated that white and sparkling wines may have greater anti-aging and weightloss properties than reds.

Low in calories and high in fiber, bamboo shoots are also remarkably salubrious. Rich in lignas and phenolic phytochemicals that help build resistance to harmful bacteria, viruses and cancers, bamboo shoots also provide vitamins A, B, C as well as other goodies like riboflavin, calcium and potassium. Studies indicate that regular consumption of bamboo shoots may help lower blood pressure, improve the digestive system and promote weight loss. Healthy and delicious in themselves, bamboo shoots reach new levels of culinary brilliance when paired with white wines.

While certain bamboo dishes with meats and rich sauces are better companions to red wines, the majority of bamboo preparations perform best when paired with white wines. One ideal partner comes from the wild and wind-blown coast of northwestern Spain. 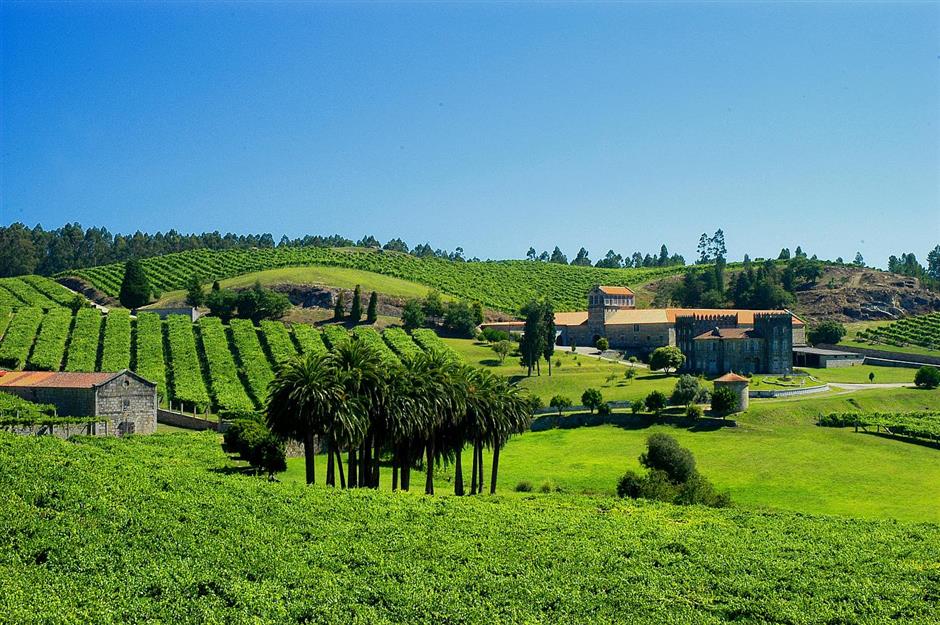 In Spain, Rias Baixas is Albarino. The former is a region and the latter a grape variety. Mountainous and lusciously green, Rias Baixas is one of Europe’s most beautiful wine regions with a majestic Atlantic Ocean coastline that’s replete with wide and deep inlets traversing many miles inland. The Rias Baixas DO has five subzones; namely, Val do Salnes, Condado do Tea, O Rosal, Soutomaior and Ribera do Ulla. The most important zones, Val do Salnés and O Rosal, are on the coast and have the coolest and wettest weather.

Carved into the rugged hills are picturesque slopping vineyards of Albarino, a variety that thrives in the damp, windy climate. Most grapes prefer more moderate, drier and sunnier climates but the small thick-skinned Albarino is one of the very few varieties able to gradually reach ripeness and retain acidity in this challenging environment.

All wines labeled Rías Baixas DO must be at least 70 percent Albarino with small amounts of four other local white varieties allowed. Many of the best wines are 100 percent Albarino and in the great majority of cases have little or no exposure to oak.

Wine historians and etymologists traditionally believed Albarino was related to the German Riesling variety, most likely brought by Germans making pilgrimages to the shrine of Saint James the Great in Santiago de Compstela in northwestern Spain. Others speculated that Cluny monks from the Loire Valley brought the grape to Spain. Both theories have been widely discredited. The most popular hypothesis today is that the variety is indigenous to northwest Spain. Whatever its origin, the grape has taken the wine world by storm.

Intensely aromatic, Albarino wines typically exhibit lively citrus, apple, almond, grass and mineral qualities. The bracing acidity of most Albarino wines makes them exceedingly food friendly and champion partners to seafood. In fact, Albarino wines are often referred to in the local dialect as “wines of the sea.” These wines also pair beautifully with a host of other foods including bamboo dishes.

With the notable exception of the rare oaked Albarinos, the majority of these wines should be consumed within three years of release.

Albarino is first and foremost a Spanish grape but the variety is also cultivated in the nearby Portuguese region of Vinho Verde where the variety is used to make light wines with zesty grapefruit qualities.

In large part due to the success of Rias Baixas Albarinos in the States, producers in California and Pacific Northwest are increasingly cultivating the variety with some impressive results. Two of the best California producers are Marinmar Estates and Paragon Vineyards.