Rice cakes well worth the wait

The city’s trend-seekers are spending up to four hours just to get a box of migao, rice cakes, and popular shops are never short of waiting lines.

Niangao is one of the Spring Festival foods enjoyed across China, as its pronunciation implies “getting higher year by year,” symbolizing growth and prosperity. Migao and niangao are essentially the same type of food, but there is a wider range of migao.

The migao trend is not limited to one particular style of rice cake: It’s more of a return to traditions and classic flavors — the phenomenon is much like vintage designs becoming new trend in fashion.

These sweet and gooey cakes are made with rice, and it can be regular husked rice, glutinous rice, black rice or even millet. 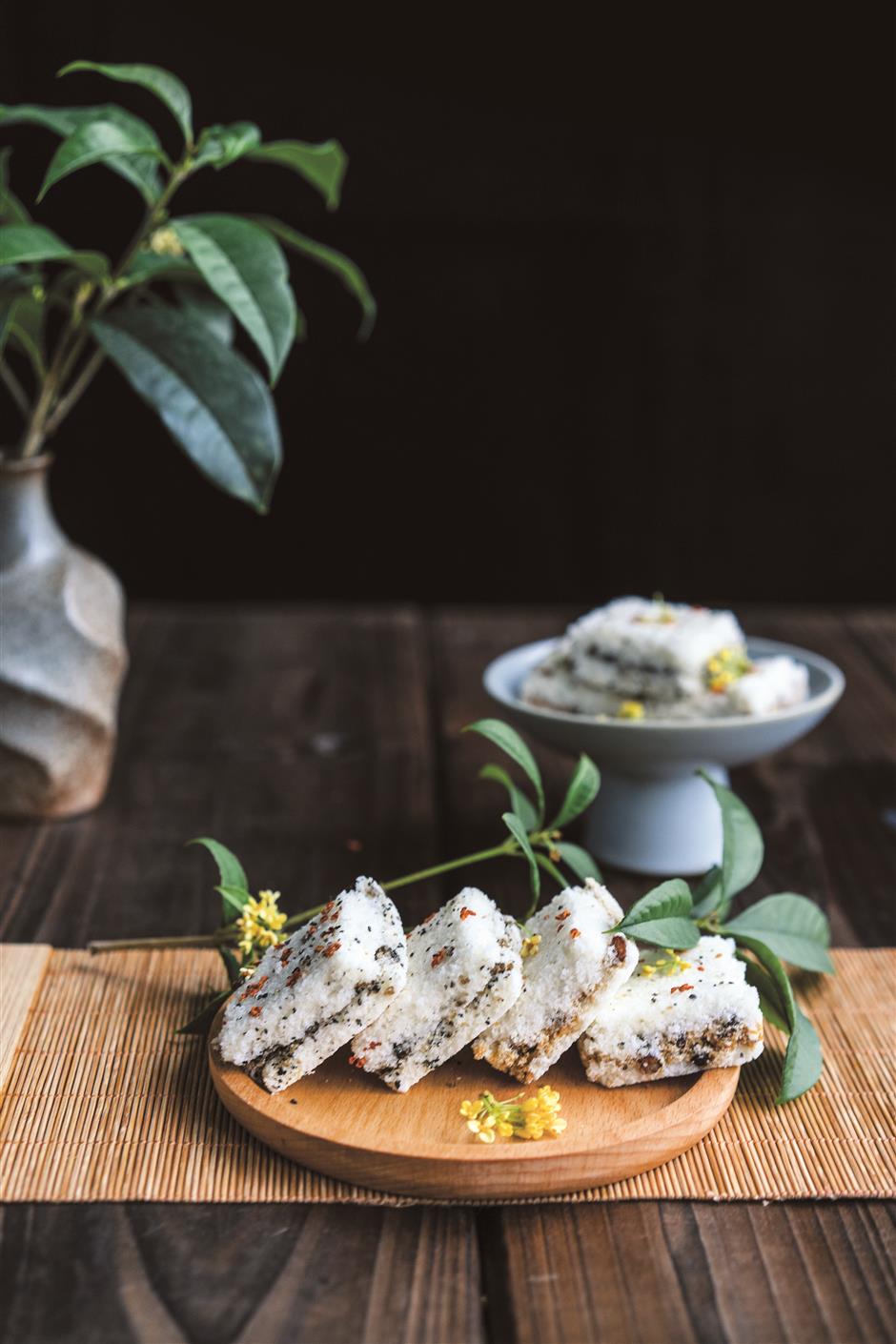 Rice cakes have a long history in China, dating back to the Han Dynasty (206 BC-AD 220) when they were called er, ci or daobing.

The simple steps in making the more primitive form of rice cakes involve steaming the rice (or glutinous rice) and then crushing and pounding until they reach a soft, sticky texture with no grains left.

Rice cakes are not limited to southern China, the main rice production regions. Across the country, different cuisines have their own versions of rice cake with different flavors, textures and history.

With little flavor of its own, rice cakes are an excellent canvas to work with, it’s easy to incorporate different flavors and ideas.

In Shanghai and its neighboring provinces, the name gaotuan refers to such sweet or savory treats made with various kinds of rice. They can be of different shapes and flavors, like having a soft filling of red bean paste or be coated with coconut flakes.

Ningbo in Zhejiang Province is perhaps most known for rice cakes and rice cake dishes. The plain Ningbo-style rice cake is made with wanjingmi, or late grain rice that’s sown after harvesting the early season crop in June and reaped in November. These are often used in savory dishes and soups such as rice cake and shepherd’s purse stir-fry, gazami crab and rice cake stir-fry or rice cake soup with green vegetables and shredded pork.

The Ningbo-style gaotuan, on the other hand, involves a broader selection of sweet rice cake treats, and they are among the trending migao products this year.

One of the crowd favorites is fermented rice and osmanthus cake, a light and fluffy cake embodying two classic Jiangnan flavors. It has a light flavor, airy with a hint of sourness from the fermented rice and a distinct osmanthus aroma. The texture is not very sticky and a little bit chewy. One piece of osmanthus cake is a great breakfast on the go or afternoon tea treat to pair with soy milk or tea. 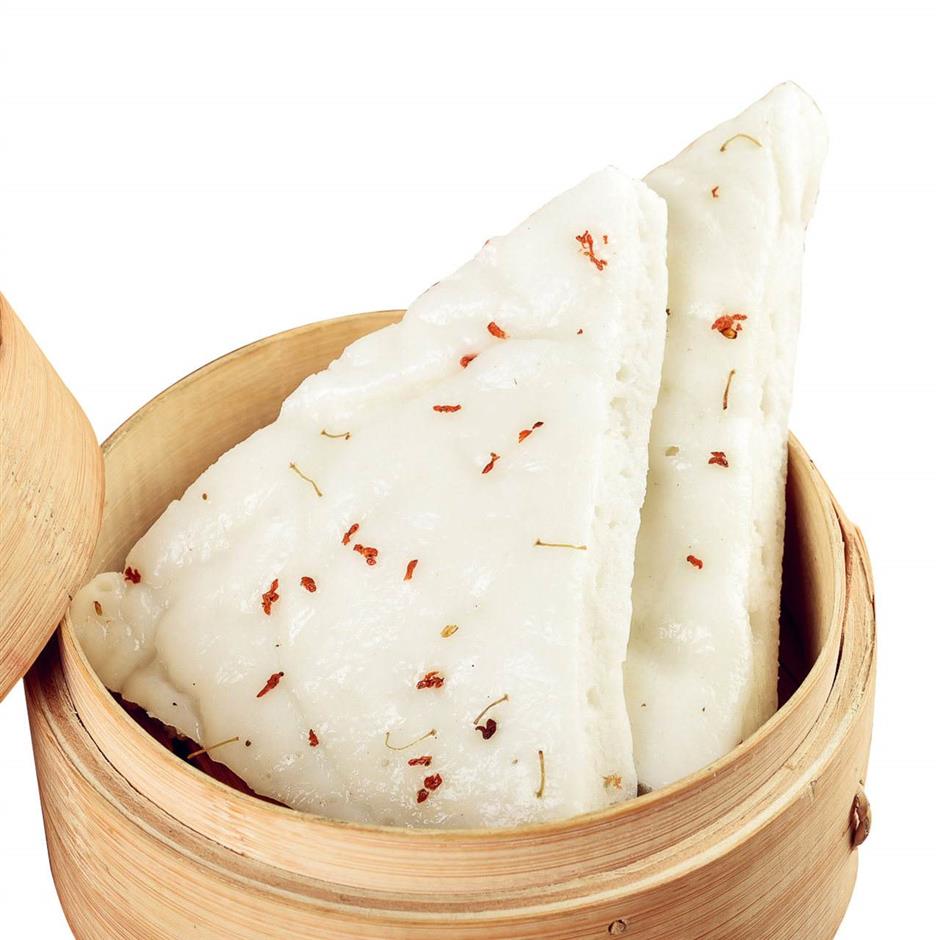 A modern variation of fermented rice and osmanthus cakes uses cranberries instead of osmanthus.

Millet cakes and black rice cakes are often sold as a combo. They have an interesting texture that’s in between a sticky rice cake and steamed flour bun, making them more staples than snacks. There’s also a stronger grain flavor and you can feel the sweetness is from the millet and black rice instead of sugar. 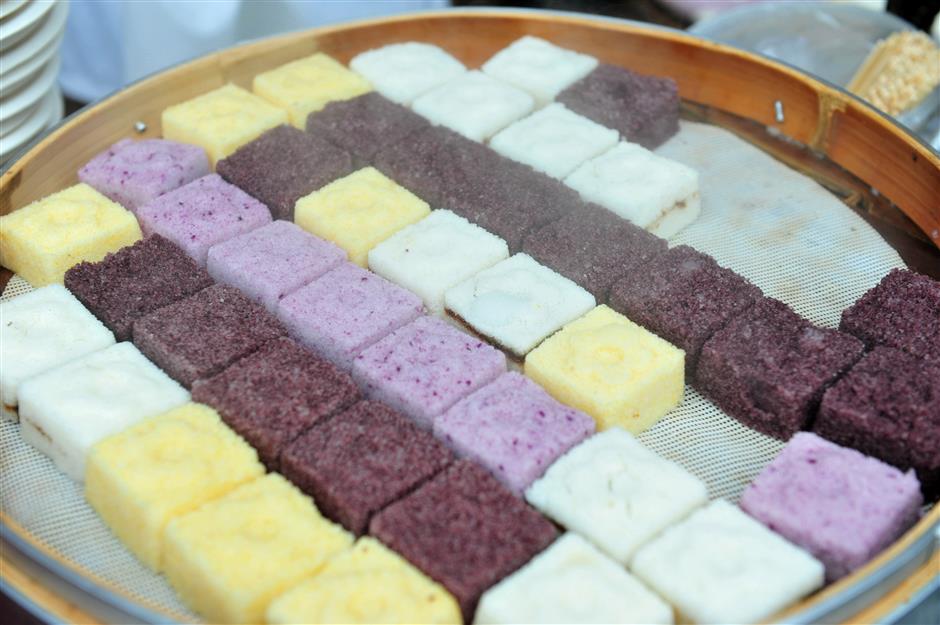 Grains like black rice and millet can also be used to make rice cakes.

Juhonggao, or orange rice cakes, are a unique Jiangnan treat. They are basically small pillows of sweet glutinous rice cakes made with cooked rice flour and sugar syrup, then coated with cooked rice flour, which prevents them from sticking together. Juhonggao can have different colors like orange or red from food coloring, but they doesn’t have the orange flavor. 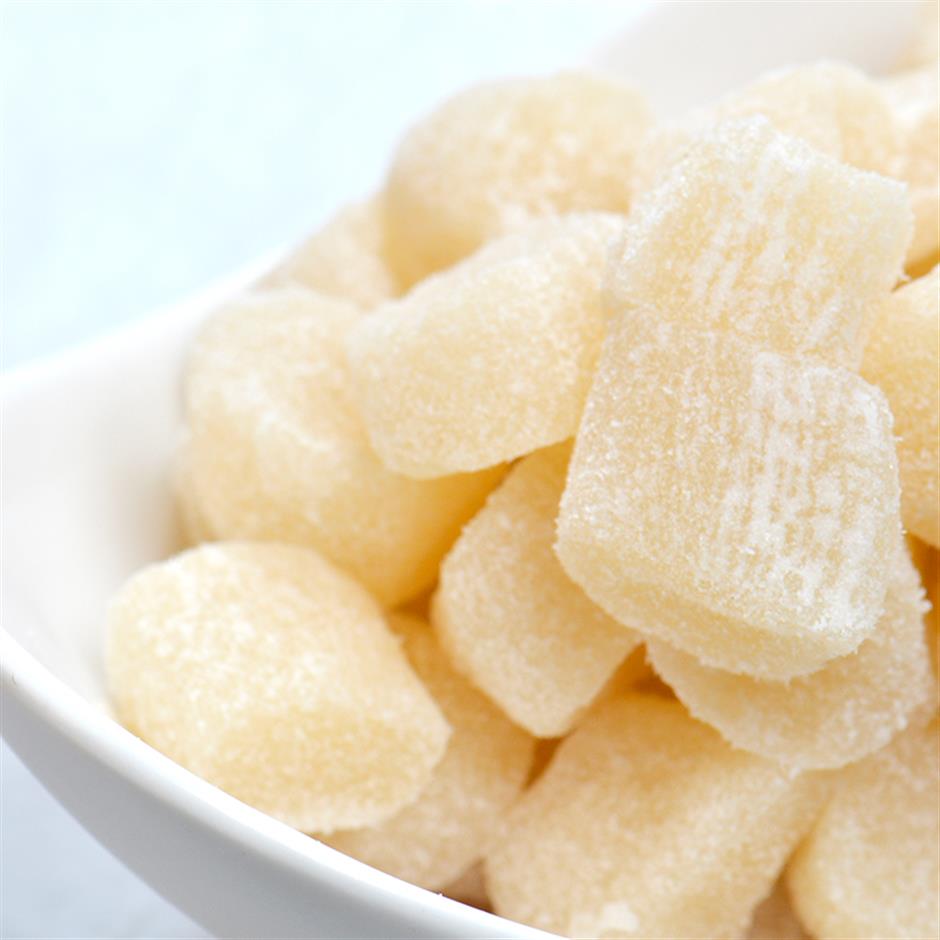 Dingshenggao, which translates as winning cake, are rice cakes made with glutinous rice and polished round-grained rice. It is said that in the Southern Song Dynasty (AD 420-479), people made dingshenggao for soldiers before a battle. The cakes were printed with the word dingsheng, meaning “must win.”

The light and fluffy dingshenggao are usually made in flower-shaped molds. They can be white or pink, and some have sweet fillings such as red bean paste or nuts. Today, people often eat dingshenggao for good luck and fortune. 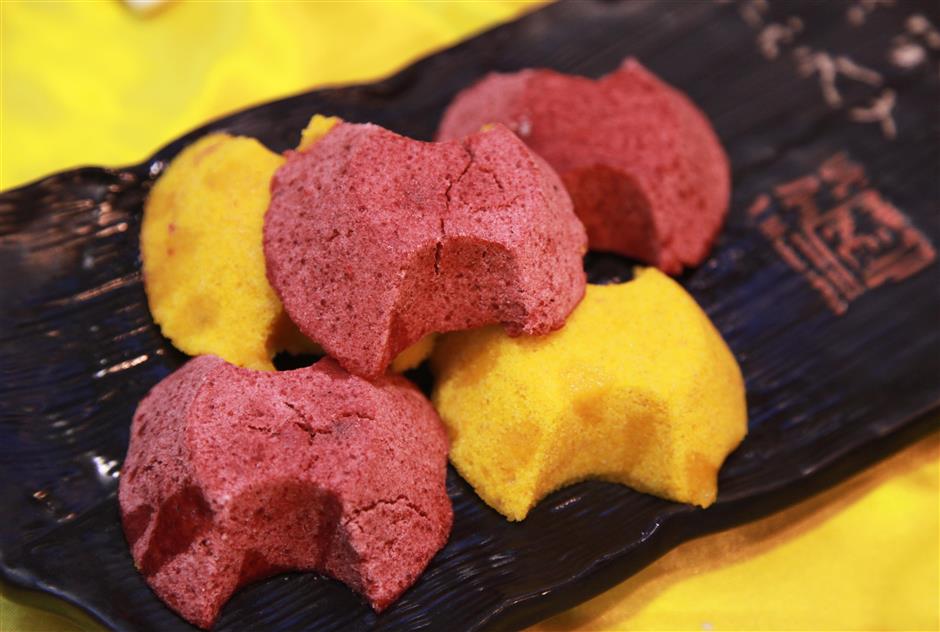 Fanggao, or square cakes, are a cheap Shanghai-style rice cake snack made with a glutinous rice wrapper and sweet fillings such as red beans, mung beans or osmanthus flowers.

Meanwhile, Suzhou-style rice cakes use a large amount of lard blended into glutinous rice and polished round-grained rice. The sweet cakes often have bean, nut or jujube fillings, while the savory can be scallion flavored.

In northern China, the Korean ethnic group’s traditional rice cakes have also gained a loyal following in Shanghai. They are known as dagao, or beaten cakes because the cooked glutinous rice is hammered in a wooden basin countless times to achieve a pancake-like texture. The rice cakes are then shaped and arranged in different ways.

Dagao are softer, sticker and chewier. They can be served as they are or rolled with fillings such as bean paste and nuts. 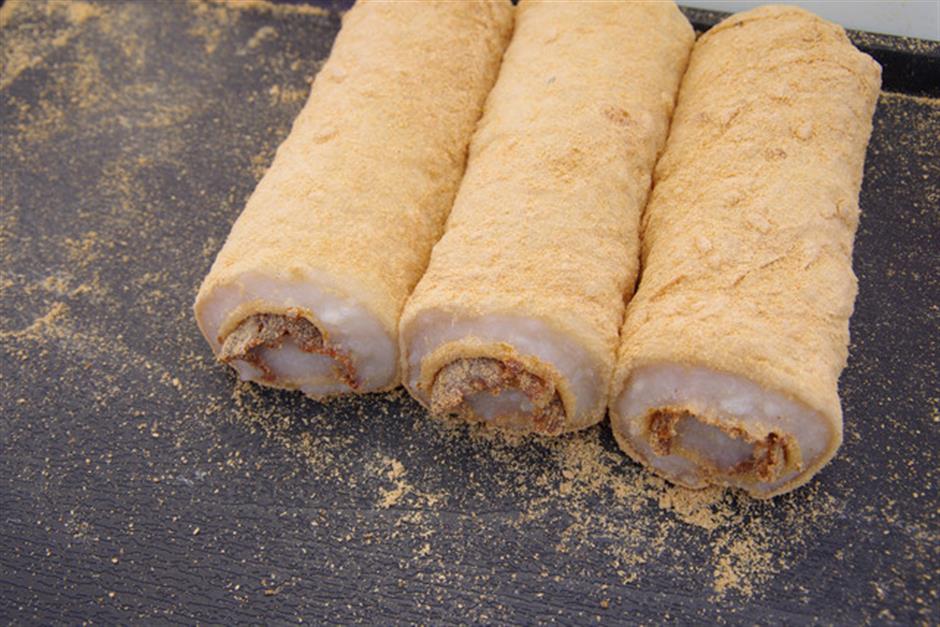 Where to find rice cakes

For locals, the Shanghai Hongkou Sticky Rice Cake brand is the go-to place to get rice cakes and treats.

Its bestseller is rice cake roll, which has different kinds of fillings from meat floss, youtiao (fried dough stick) to egg and sugar wrapped inside thinly rolled rice cakes. They are eaten as a burrito and the contrast of different textures as well as combination of sweet and savory ingredients makes the rice cake roll a fun and fulfilling food.

Address: many locations across Shanghai 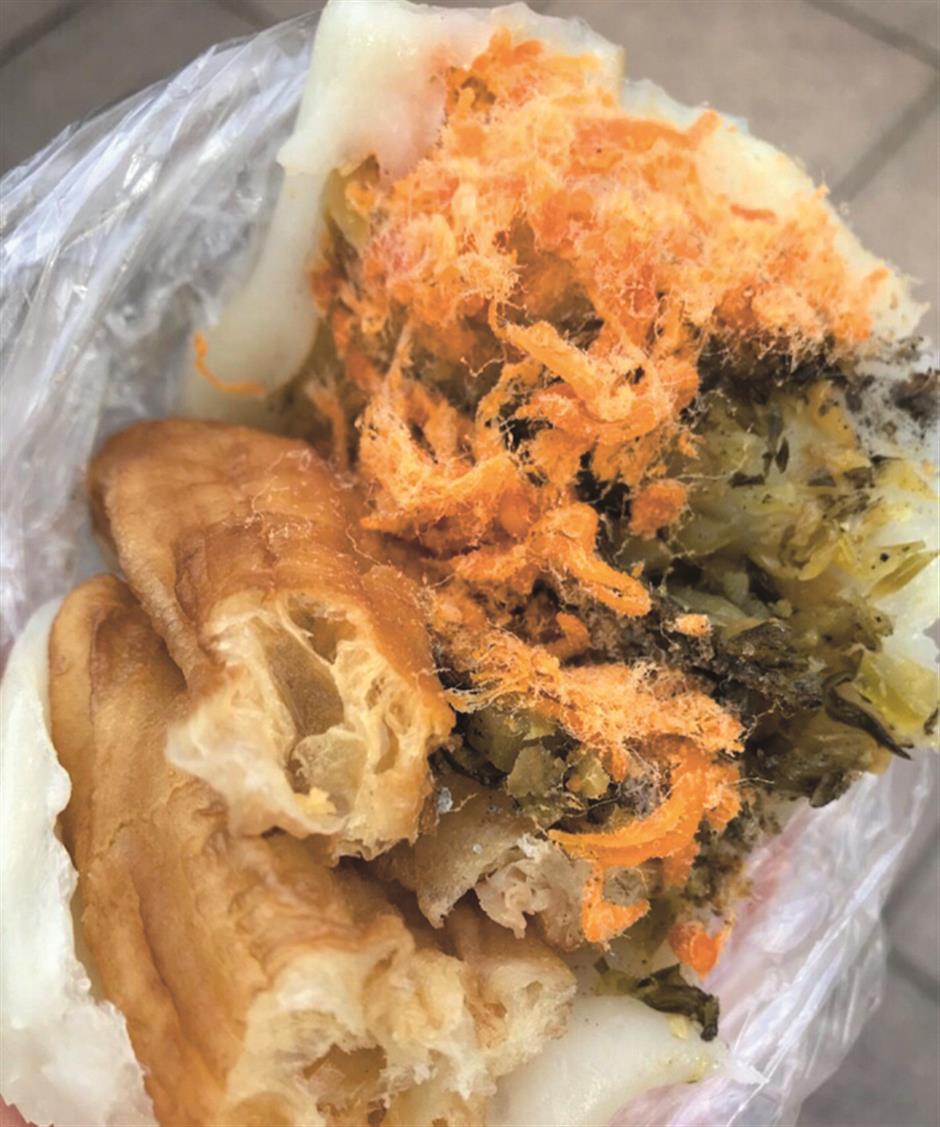 This small shop on Nanhui Road specializes in traditional Ningbo-style gaotuan. The rice cakes are made fresh in an open kitchen at the back of the shop, and are very popular with the city’s rice cake lovers.

Their fermented rice osmanthus cake is a must-try, it’s mildly sweet, airy and tastes quite fresh. The millet cake and black rice cake is available as a combo, and they’ve done a very good job with the grain flavor and an al dente texture.

Pan Yong Xing also has a walnut cake that has the same appearance as real walnuts as well as a walnut filling. They also have dagao, but the flavor is quite plain and the large pieces of dense rice cake are not very easy to digest.

The waiting line at Pan Yong Xing used to be long, but now it takes several minutes to buy rice cakes. Orders can also be made on delivery apps, but they may close delivery service during lunch hour. 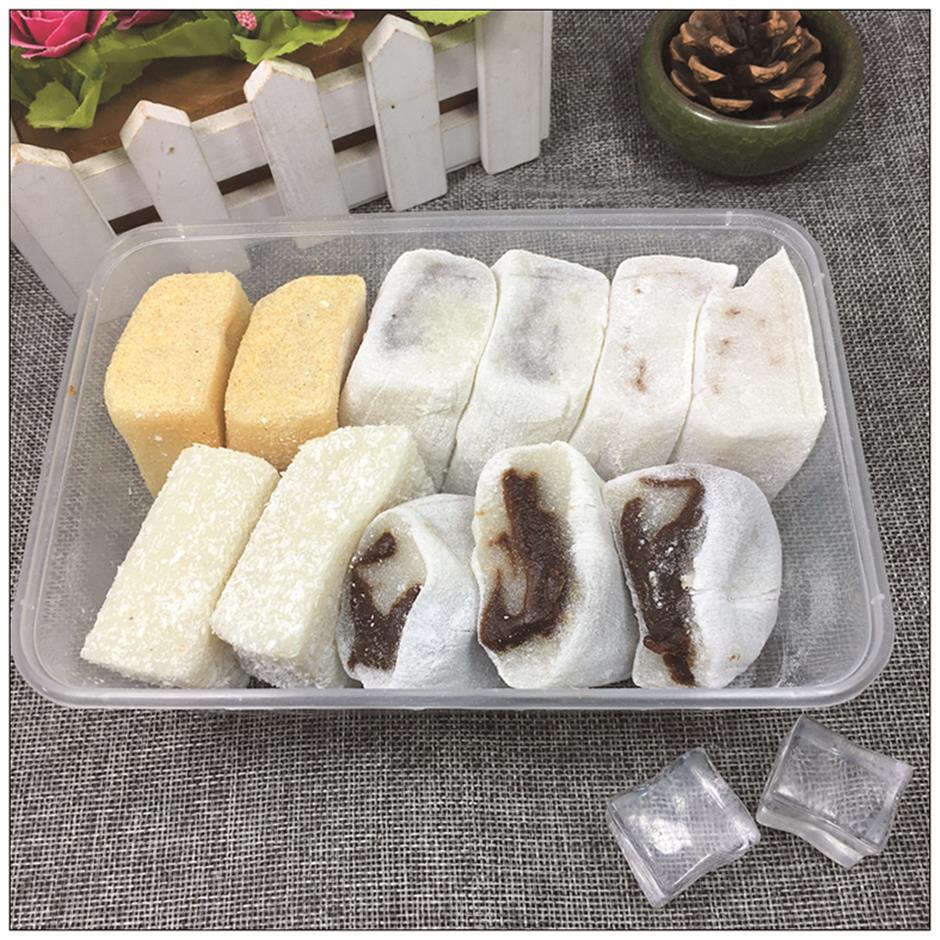 This is the rice cake brand with the longest waiting lines. When it first became popular in Shanghai, the waiting line used to be over four hours, and resellers would auction the cakes at high prices. Now the lines are manageable and more locations have opened.

Nan Da Men is named after Namdaemun, one of the Eight Gates in the Fortress Wall of Seoul, South Korea. This rice cake shop serves the Korean-style qiegao, which means chop rice cake, as the cakes are chopped into smaller pieces after the dough is rolled out.

The most popular flavors are the red bean qiegao, osmanthus cakes and coconut balls. The flavor of Nan Da Men products is ok but they certainly aren’t worth waiting hours for.

The red bean paste cake is a smart product as the drier red beans coat the cakes to prevent them from sticking to the teeth, there’s also a pumpkin filling but the flavor is not very pronounced. 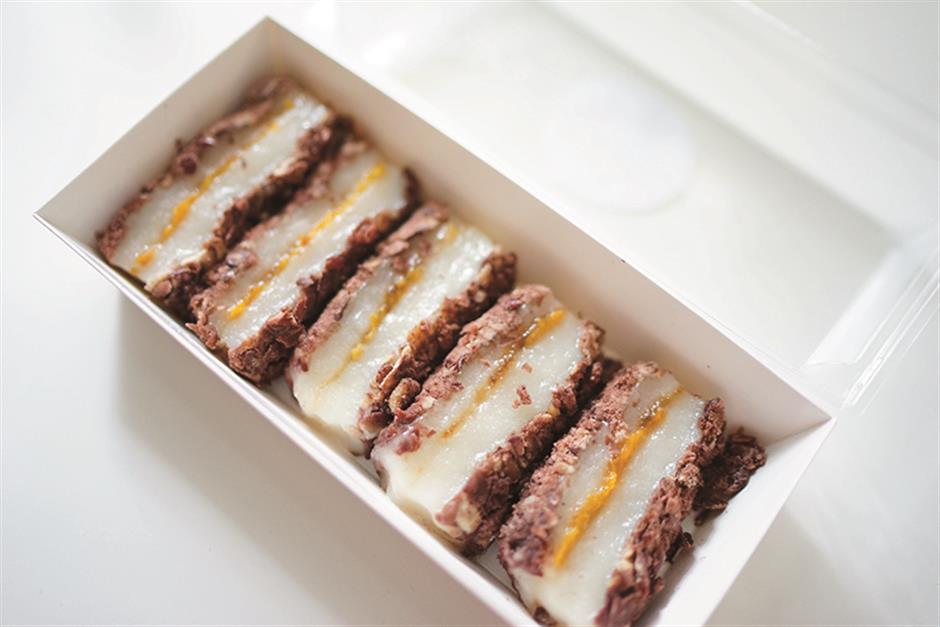 ﻿
Special Reports
ADVERTISEMENT
Cherries blossom in a glass of Sangiovese
Time to make the most of mussels
Marrakech, an exotic spice of culinary life
Hand mixers boom hits the nation
Serving up an authentic taste of Singapore
So you think you know noodles?
Michelin stars for restaurant's Taizhou cuisine focus
Restaurants find ways to adapt to outbreak
Snacks will keep your guests happy
The Cut Meatery calls out to local carnivores
EXPLORE SHINE