Immensely popular and widespread in southern areas of the country, rice noodles are a staple that can go along with anything — soup, as salad and in stir-fries.

Compared with noodles made from wheat flour or other cereal grains, rice noodles are less starchy and the taste is cleaner when cooked in soups or broths. They also have minimal flavor and can be paired with almost anything.

Rice noodles are different from cellophane noodles, as the latter are made from beans and become transparent when cooked.

The versatile staple is said to have originated in the southern city of Guilin in the Qin Dynasty (221-206 BC), and rice noodles from the region are enjoyed by people across China. Guilin-style rice noodle dishes have incorporated different flavors over the course of history.

Rice noodles on their own are a dull ingredient, so the key to making delicious dishes lies in the soups, sauces and toppings.

The stock known as lushui is most important. Recipes from different shops vary, but in general it’s a stew of pork and beef bones, spices and some traditional Chinese medicine herbs.

Luosifen, or river snail rice noodles, is a specialty from Liuzhou in the Guangxi Zhuang Autonomous Region. The highlight of luosifen is its slow-cooked broth of river snails and pork bones, as well as pickled sour bamboo shoot shreds, the distinct stinky smell and taste of which is not easily acceptable to everyone, though highly addictive.

You won’t find the actual river snails in luosifen because they are discarded after the soup is stewed. The dish features a wide selection of toppings in addition to the sour bamboo shoots, such as dried radish, fried peanuts, green vegetables or braised duck.

The spicy and sour luosifen has gone viral on Chinese social media because of its unique flavor. In addition to dining in the smaller restaurants that specialize in luosifen, there are instant noodle packs that contain dried rice noodles, soup concentrate and classic toppings. It’s important to read the instructions, as many require boiling the rice noodles instead of cooking in boiling water. 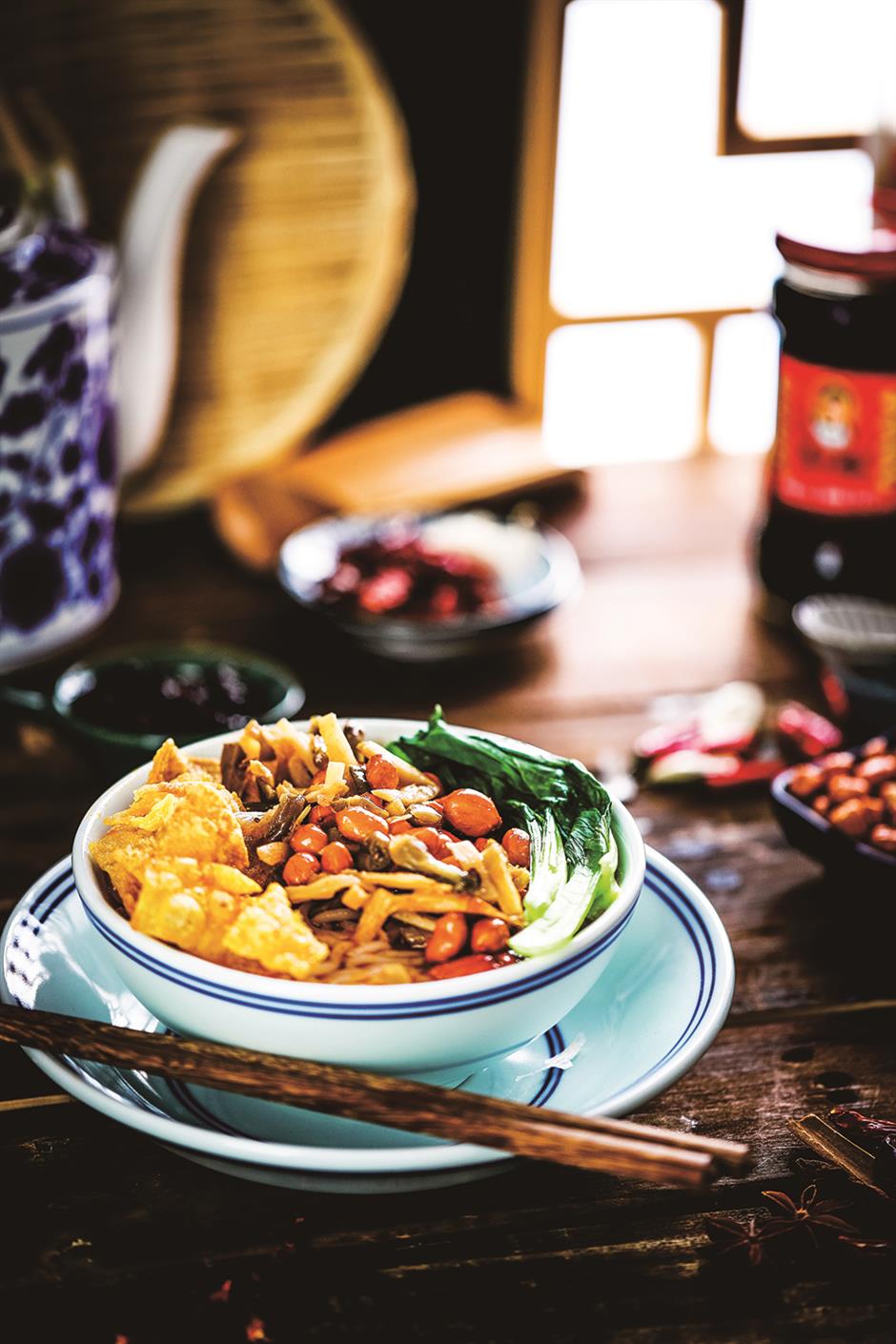 Luosifen uses a special stock made from river snails and pork or beef bones.

In Guangxi’s neighboring Yunnan Province, the most famous local staple is mixian, a variety of thin, round noodles served in soups or fried.

Suanjiang mixian is a traditional rice noodle dish you won’t find elsewhere. It involves a fermentation process for the rice before it is milled, steamed and shaped. It’s difficult to keep suanjiang mixian for more than a day, so it is always sold fresh instead of dried. The rice noodles have a slightly sour taste and are quite resilient in texture.

In contrast, ganjiang mixian is easier to produce and can be stored longer. The preferred mixian in Yunnan is the fermented type.

The most well-known mixian dish is guoqiao mixian, or “crossing the bridge” rice noodles. The name came from the tale of a local xiucai (the title of students who passed imperial examinations at county level) who had to cross a bridge to study on a small island. His wife found out that a layer of oil could keep the chicken soup warm for longer time. So she prepared a unique lunch for her husband to take every day: a hot chicken broth covered with oil, cooked and drained rice noodles and thinly sliced vegetables and meats.

To eat guoqiao mixian, add the rice noodles and toppings to a hot broth to heat thoroughly. The soup is usually stewed from pork bones, chicken and Yunnan ham.

Hunan Province is another major destination in the pursuit of rice noodle delicacies. The thinner and softer noodles are served with rich toppings such as beef, radish, pickles and chilis.

The most typical Hunan mifen dishes are Changde beef mifen that are soup bowls topped with meat or beef offal, Changsha mifen, which is cooked with flat rice noodles and topped with either pre-made toppings or made-to-order fresh stir-fry side dishes, and the thin Hengyang mifen with more options for soup stocks. 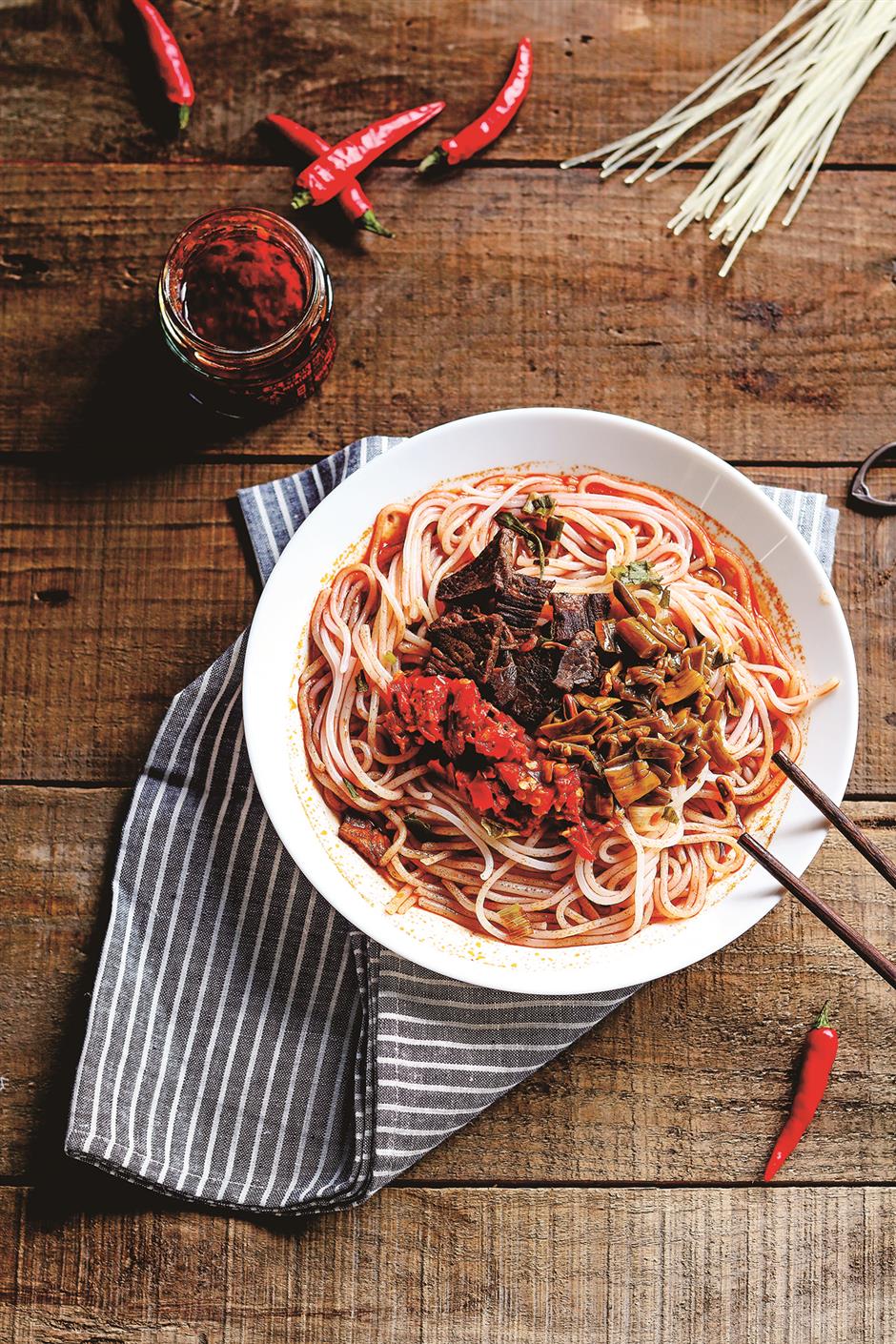 Rice noodles are also enjoyed in China’s far west. The bold-flavored Xinjiang-style rice noodles are stir-fried, tossed with toppings or served in soups. The stir-fried rice noodles with celery and beef (or chicken), seasoned with lots of chilis and spices, are a crowd favorite.

Hefen, the common rice noodle in Cantonese cuisine, originated from Shahe which is now in the city of Guangzhou. It’s a variety of the wide noodle often used in stir-fries with meat and vegetables.

The process of making hefen is less complicated, and fresh raw noodles are available in markets. They are quite fragile in texture and can break up easily if stirred too hard in the wok, so the key is to use enough oil and fry on a high heat to reduce the cooking time. 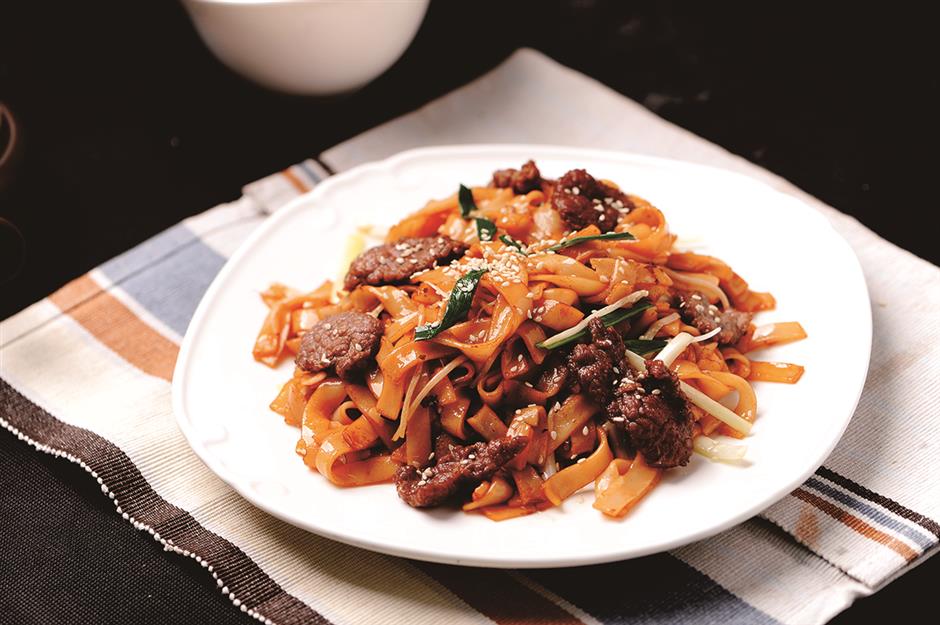 A Cantonese dim sum classic, changfen is a rice roll served with sauces or toppings, with or without fillings.

The sheets of rice noodles are made of a mixture of rice flour and water at the appropriate ratio and steamed to cook. A proper dish of changfen should be soft yet structural with an al dente texture.

Most changfen dishes served in Shanghai’s Cantonese restaurants have fillings such as shrimp, youtiao (fried dough stick) or barbecued pork. But original changfen can be served plain with a simple sauce — it’s all about the smooth and fragrant qualities of the rice roll.

In Chinese cuisine, liangfen, or starch jelly, is a staple or snack that’s very suitable for hotter weather.

The jellies made from beans or rice are soft, tender and bouncy. Many regional cuisines have their own versions of liangfen, which can be served as a cold appetizer with a spicy and sour dressing, or be stir-fried with ginger, scallion, peanuts and more. 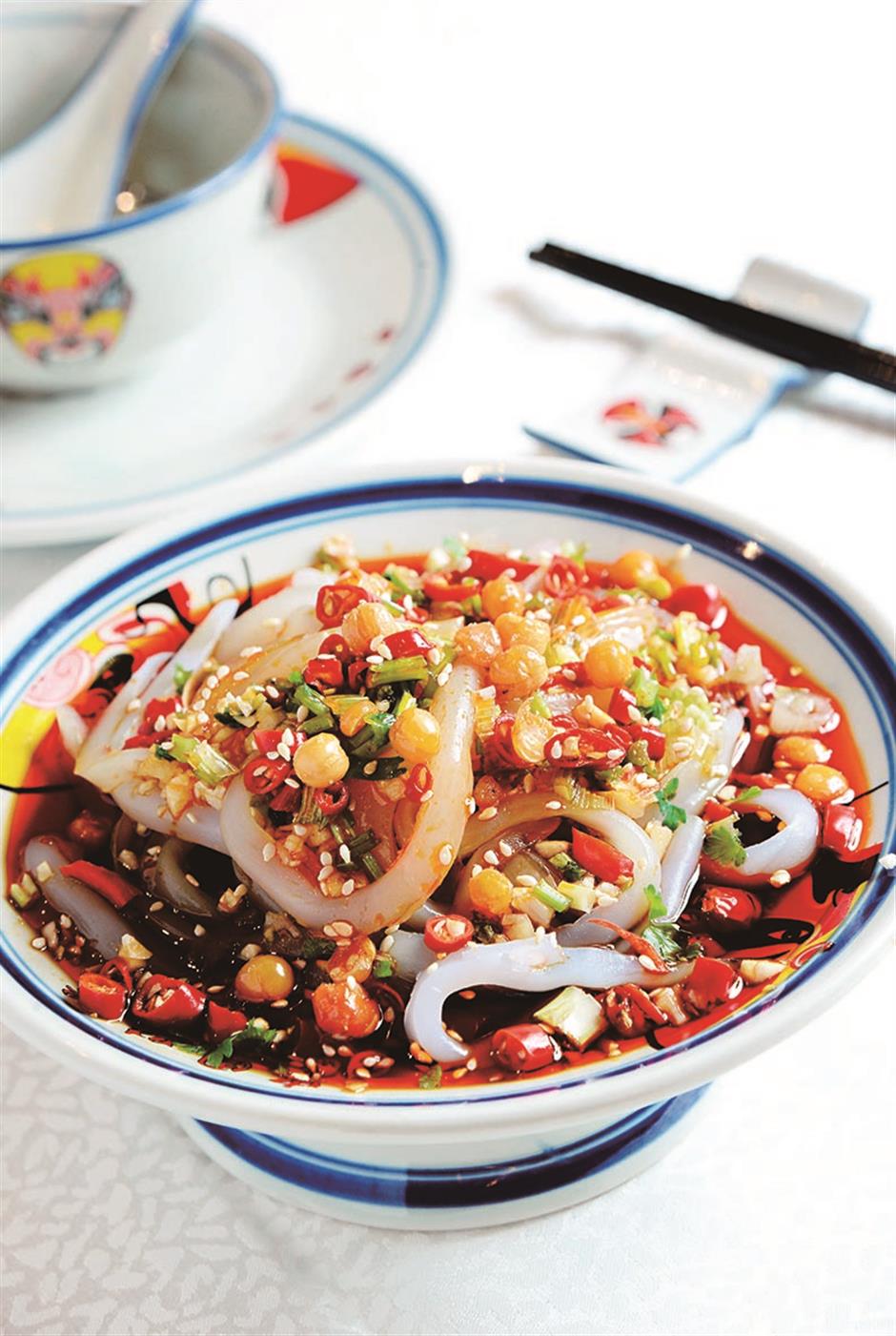