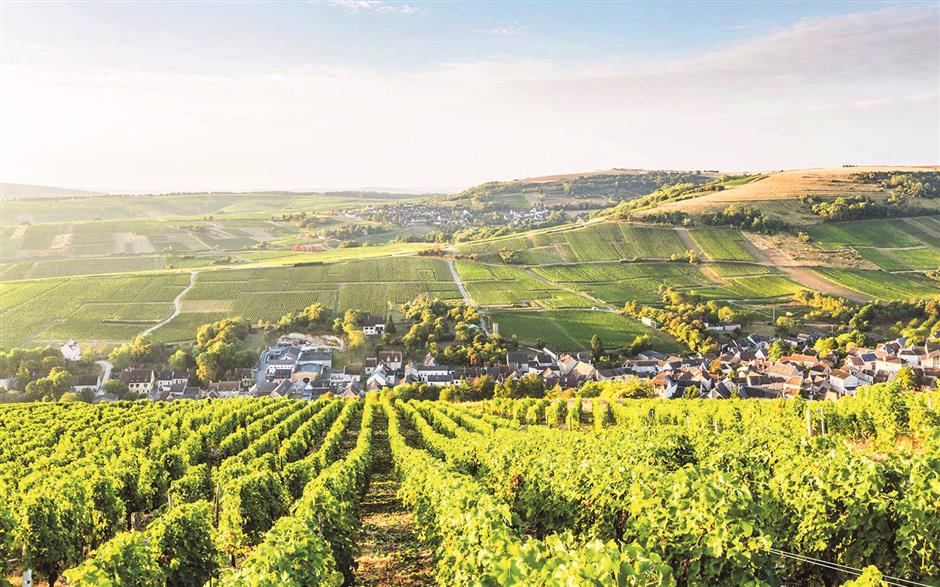 Sloping vineyards of Sancerre along the Loire River

Many historic and storied Chinese dishes are cooked in or with leaves. While no one style of wine pairs perfectly with all Chinese dishes, one does exist that has leafy qualities and is a lovely companion to a wide range of China’s most celebrated dishes.

This variety also tends to make intensely aromatic wines with good acidity. The leafy and grassy aromas and flavors in Sauvignon Blanc come from flavor compounds known as methoxypyrazines that are also found in fresh grass.

Sauvignon Blanc originated in the Gironde area of southwest France in the 17th century and is believed to be a descendant of the more ancient variety Savagnin. In the Old World, the Sauvignon Blanc grape makes some of the world’s best white wines, most notably in Bordeaux where it is most often blended with Semillon and also in the Loire where it’s used to make stylish single variety wines under the names Sancerre and Pouilly-Fume.

The Loire River runs through the heart of France and wines from this region have captured the hearts of wine lovers all around the world. In particular, the wines from the hillside vineyards around and near the villages of Sancerre, Bue and Chavignol have been seducing the palates of drinkers who desire white wines of purity, elegance and minerality. Sancerre white wines are among the most elegantly perfumed wines in the world and are meant to be enjoyed as much with the nose as with the mouth.

If you’re a fan of top French perfumes and colognes then these wines are sure to enchant you with their sophisticated aromas of delicate fruits, flowers and minerals.

Since AD 1 when the Romans first planted vines on the hillsides overlooking the majestic Loire River, the wines of this region were mostly red from the Pinot Noir and Gamay grapes.

This land was historically linked to the Duchy of Burgundy, so it’s no accident that the red grapes of Burgundy were favored. But during the time of the Dukes, the wines of Sancerre were not as highly regarded as those from Champagne and Burgundy.

A disaster helped change the wines and reputation of the Loire in general, and Sancerre in particular. In the late 19th century the phylloxera epidemic devastated the vines of Sancerre, as well as vines in many other regions of France.

In Sancerre most of the growers replanted with the white variety of Sauvignon Blanc because it grafted better to the American rootstock that was resistant to the disease. Today, Sauvignon Blanc accounts for about 80 percent of Sancerre wines, while Pinot Noir only comprises 20 percent. As is often in history, it was not the daring sagacity of the winemakers that created one of the great white wines of the world, it was desperation.

Sancerre wines originate from three main soil types: clay, limestone and flint. Sancerre wines are more floral and elegant than wines of the same varietal type in other regions, exhibit more floral aromas and are bone dry. The climate is predominantly continental with extreme seasonal temperature differences that help bequeath freshness to the wines. The fresh nature of Sancerre wines is also due to little or no oak used in the winemaking process.

Since the Sancerre AOC was established in 1936, the region has grown fourfold with the most recent expansion in 1998. In the wine world, bigger seldom mean better wines. In the case of Sancerre, this expansion resulted in inconsistent quality ranging from some of the best white wines in the world to indifferent wines only suitable for quaffers. Knowing specific growing areas within the Sancerre AOC is one method to pick good wines, but the easiest way is to know the top producers. Fortunately, several top producers have wines available in Shanghai.

Pascal Jolivet is a relative newcomer, making Sancerre wine only since 1985, but what the winery lacks in history it more than makes up for in quality. Based in Sancerre, the producer now owns over 120 acres of vineyards spread across the appellations of Sancerre and neighboring Pouilly-Fume. Pascal Jolivet practices natural winemaking and environmentally friendly techniques making wines of exceptional freshness, purity and elegance.

Domaine Delaporte has been a family business since the 17th century. The domain is headquartered in the picturesque village of Chavignol, which is famous globally for its goat’s cheese. The wines of Delaporte are known for their finesse and subtlety. Another historic producer is the Mellot wine estate that was founded in Sancerre over five centuries ago. Their Sancerre La Gravelierre is a lively, clean wine with a palate pleasing mineral finish.

One of the most prestigious names in Sancerre is Henri Bourgeois. The Bourgeois family has been making wines for 10 generations. From the entry level Petit Bourgeois Sauvignon Blanc that’s not even a Sancerre AOC wine because some of the fruit is sourced outside the AOC, to the majestic Sancerre Blanc La Bourgeoise the wines of Henri Bourgeois offer Sancerre typicity and refinement.

Other top Sancerre producers with wines available in Shanghai include Laporte, Domaine du Nozay, Anthony Girard and Vacheron. In Sancerre, the recent string of vintages from 2015-2017 have all been excellent. But when purchasing older vintages, I counsel only buying the wonderful wines of 2009 and 2010.