The legend of a beggar's chicken

In “The Legend of the Condor Heroes,” the fate of the protagonist was changed by a titillating chicken.

When Huang Rong stole a chicken and baked it in clay to provide some good nutrition to Guo Jing, the delicious aroma attracted Hong Qigong, chief of the Beggars’ Sect and the “Northern Beggar” of the Five Greats.

The chicken was so tempting that in order to eat the chicken, Hong agreed to teach Guo martial arts, and Huang agreed to prepare fine cuisine for him every day in return.

Hong taught Guo “Eighteen Dragon-Subduing Palms,” the most powerful of all external martial arts in the novel.

This chicken scene from “The Legend of the Condor Heroes” by Louis Cha, the late Chinese martial arts writer widely known by his pen name Jin Yong, is one of the most memorable writings about food in Chinese wuxia literature, a genre of martial arts and chivalry fiction that centers on the adventures of kung fu heroes. 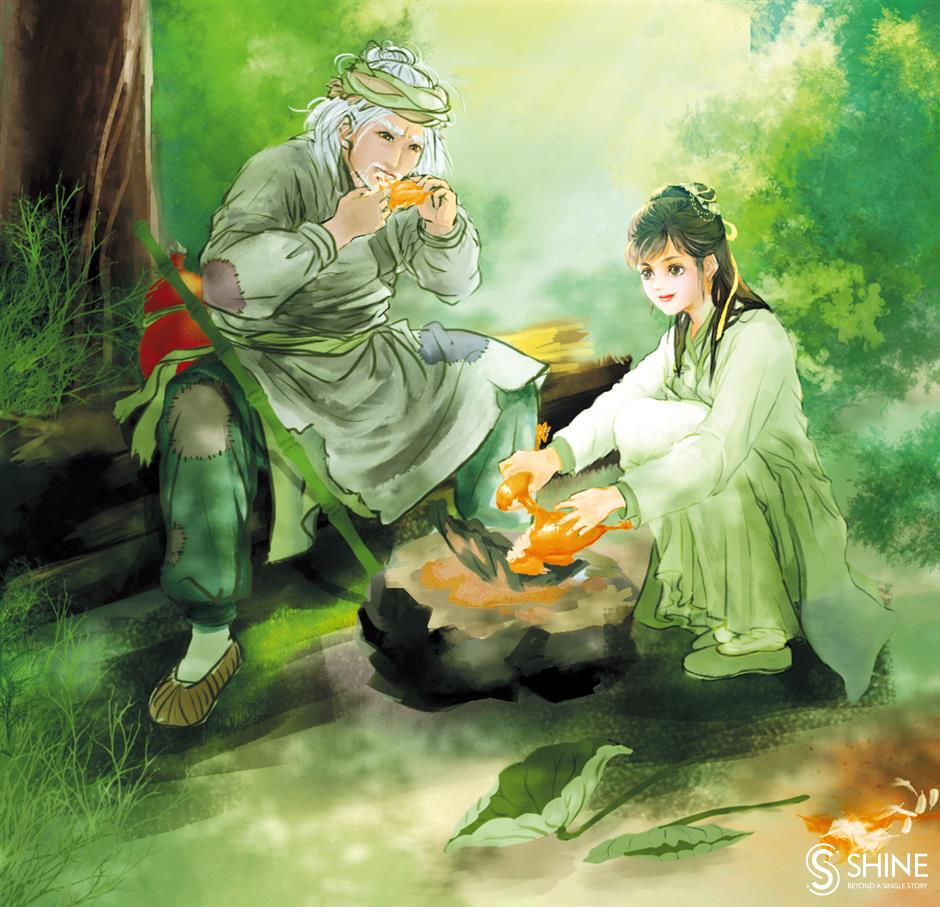 Huang Rong makes begger’s chicken for Hong Qigong in “The Legend of the Condor Heroes.”

Beggar’s chicken is a traditional dish from Hangzhou which wraps a stuffed chicken in clay and bakes it on low heat so the meat of the chicken can absorb all the rich flavors of the spices and fall apart easily.

If conditions permit, the dish is perfect for camping as no pan or pot is required — simply dig a hole, make a fire and bury the clay wrapped chick-en inside to cook.

Beggar’s chicken is a fun dish in Chinese culinary culture, and there are different stories of how the dish was created.

One legend has it that after a beggar stole a chicken from a farm, he had no pots to cook it, so he came up with the idea of wrapping the chicken in lotus leaves and used clay to seal it. He set it in a hole and lit a fire, burying the chicken so it would cook.

When the beggar dug up the chicken and smashed open the clay, he was surprised to find an extra tender, juicy and aromatic chicken, cooked to perfection with little effort.

Another legend associated with beggar’s chicken was when Emperor Qianlong of the Qing Dynasty (1644–1911) traveled to Jiangnan (south of the lower reaches of the Yangtze River) as a commoner. He was lost in the wild, and a beggar gave him a cooked chicken which he considered a delicacy. The hungry emperor found the chicken delicious and asked the beggar for the name of the dish. 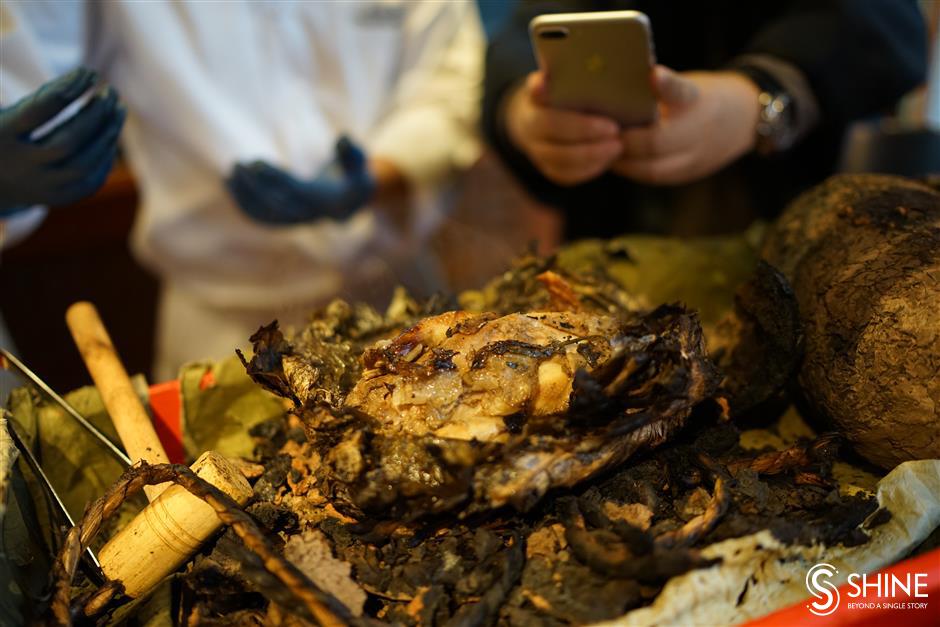 In modern cooking, the simple, rustic dish has evolved to feature delicious fillings of mushroom and finer seasoning with spices and herbs.

One original tale about the recipe said to wrap the chicken, still with its feathers on, directly in clay, and when the clay is baked dry, the feather would be removed along with the clay to reveal the cooked chicken meat. For sanitation and easy application concerns, beggar’s chicken mostly uses lotus leaf, which is large enough for bigger birds, to wrap the plucked, rinsed and seasoned chicken before sealing it with clay. That way, the chicken is not only cleaner without touching the clay, but also takes in the fresh fragrance of the lotus leaf.

When making the dish at home, the smaller Cornish hen is the more convenient option. The chicken can be wrapped inside a lotus leaf and sealed with dough, a less messy substitute for clay that’s easily prepared with ingredients already in the pantry.

In the fall, sweet and starchy chest-nuts can be stuffed inside the chicken, which will be cooked in the delicious chicken jus.

Beggar’s chicken is often cracked open with a small hammer when it’s being served.

Cooking foods that are wrapped in fresh leaves is a traditional Chinese technique that aims to seal in all the delicious juices and flavor of the meats and vegetables.

Lotus leaves, being refreshing and large in size, can be used as a wrap-per to make more delicacies such as chicken and glutinous rice in lotus leaf, a Cantonese dim sum dish that stir-fries glutinous rice, shiitake mushrooms and marinated chicken and then stuffs the mixture in fresh lotus leaves and is then steamed until it’s fully cooked.

The leaf allows the chicken and glutinous rice, both ingredients that require extensive cooking to achieve the desired texture, to cook won-derfully with every bit of the juice preserved inside the leaf pocket. 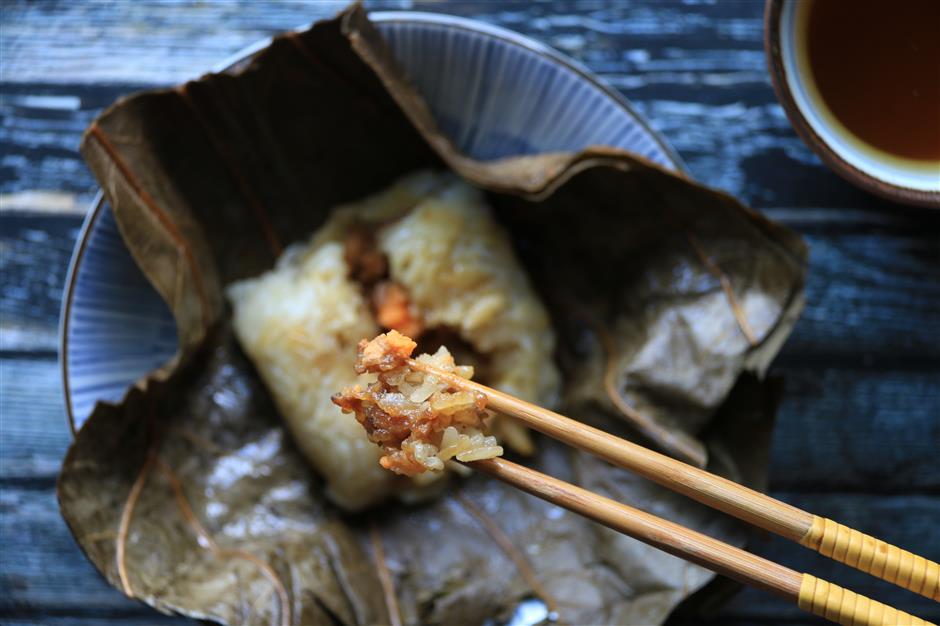 The dish was said to be born at the night markets in Guangzhou when vendors used to make steamed chick-en and glutinous rice with bowls, but opted for lotus leaves as they were easier to carry and sell. Apart from shiitake mushrooms, the classic lotus leaf chicken and glutinous rice also adds dried scallops and salted duck egg yolks for that extra umami flavor.

Zongzi, the traditional Chinese snack made to celebrate the Dragon Boat Festival, is another iconic dish cooked by wrapping ingredients in fresh leaves.

There are different leaves to choose from when making zongzi, the more common varieties are reed leaves and ruoye (indocalamus leaf).

Wrapping glutinous rice with sweet or savory fillings in fresh leaves is a way to add extra flavor and make the snack easier to store.

The technique known as baoshao uses the large, thick and firm fresh banana leaves as the cooking utensil. After cutting the leaves in desired shapes and sizes, the banana leaves are blanched briefly in boiling water to further improve elasticity so they won’t break apart when wrapping the foods.

All kinds of ingredients, ranging from fresh fish marinated in ginger, garlic, chili, mint and cilantro, pig’s brain seasoned in heavy flavored sauce, to tofu and mushrooms, can be folded and wrapped inside the ba-nana leaves. The leaves can seal in the moisture of the ingredients and maintain the heat after the dish is served.

The pockets of food are then fixed with wooden sticks and grilled over an open fire. The cooking time varies depending on the type of ingredients — vegetables cook faster than meats and whole fish, and when it’s time to open the banana leaves, you are greeted by the rich aromas of spices and fresh ingredients. 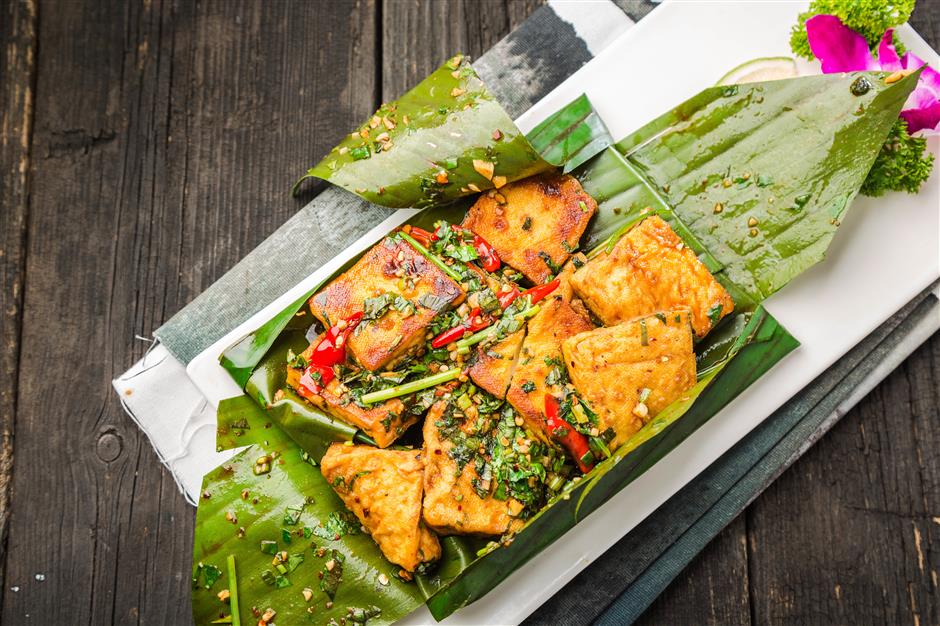 In Yunnan cuisine, the banana leaves are used to make special baked and grilled dishes.

﻿
Special Reports
ADVERTISEMENT
,
Cherries blossom in a glass of Sangiovese
Time to make the most of mussels
Marrakech, an exotic spice of culinary life
Hand mixers boom hits the nation
Serving up an authentic taste of Singapore
So you think you know noodles?
Michelin stars for restaurant's Taizhou cuisine focus
Restaurants find ways to adapt to outbreak
Snacks will keep your guests happy
The Cut Meatery calls out to local carnivores
EXPLORE SHINE