Summer Palace, the Cantonese restaurant at Jing An Shangri-La, West Shanghai is serving a Yunnan wild mushroom menu until September 30. Crafted by executive Chinese chef David Liao, the menu features several varieties of mushrooms flown in from the southwest province.

The dishes are elegant and fresh, starting with a marinated Yunnan mushroom salad mixed with bamboo pith and walnut.

The double-boiled chicken soup with matsutake and zucchini is not to be missed. The soup, cooked inside a small wax gourd, is clear in color yet rich in flavor. 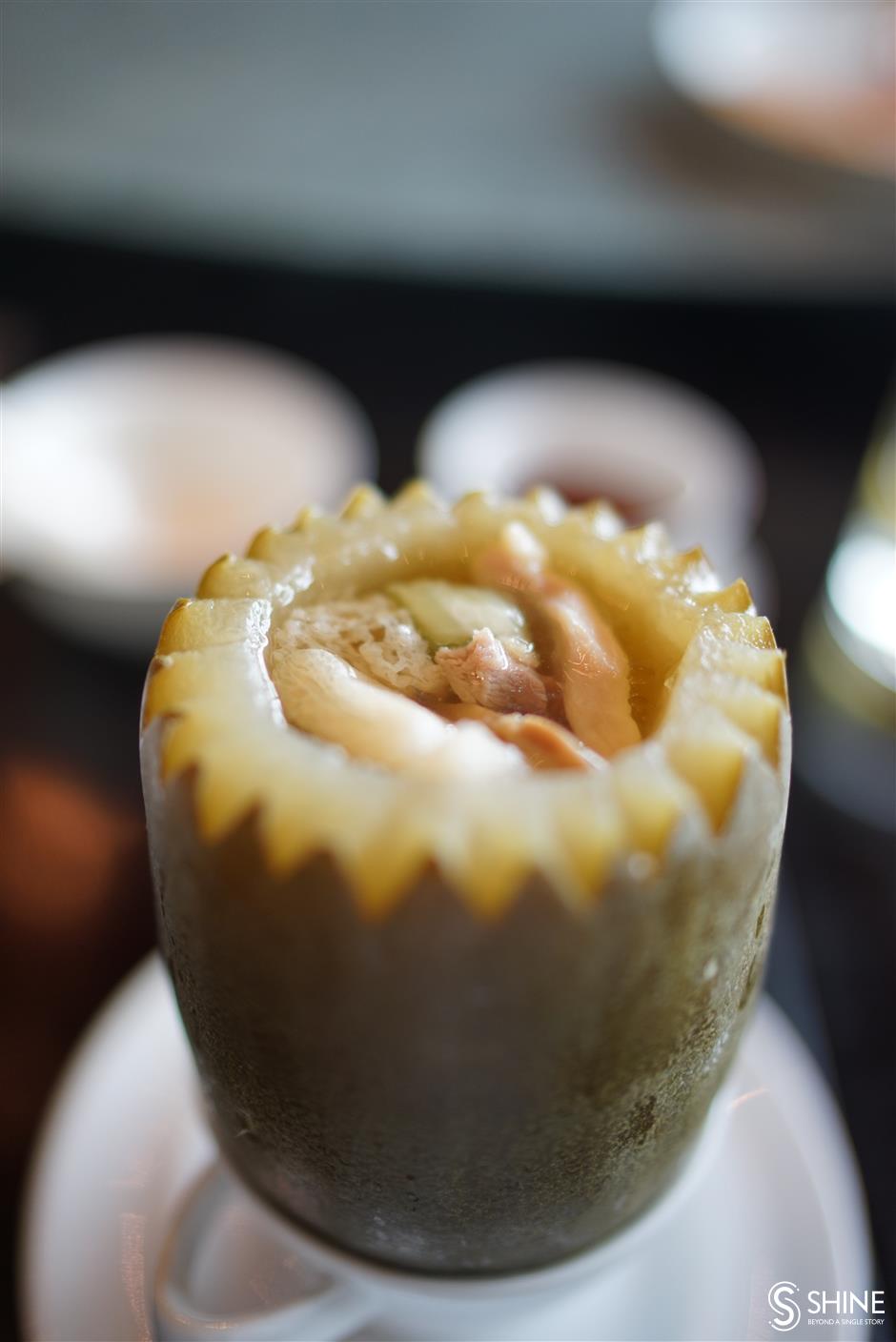 As the main course, the stir-fried chicken with Yunnan mushroom is an aromatic dish with home-cooked feeling. The meaty and flavorful Termitomyces albuminous mushroom is a great companion to chicken.

A lighter option is the fish fillet soup with Yunnan mushroom, which also uses Termitomyces albuminous for added flavor.

For a staple dish, clay pot rice with black porcini is simple and satisfying.

Liao has even created a mushroom dessert: a rose and porcini ice cream that's slightly denser than gelato yet mildly sweet. 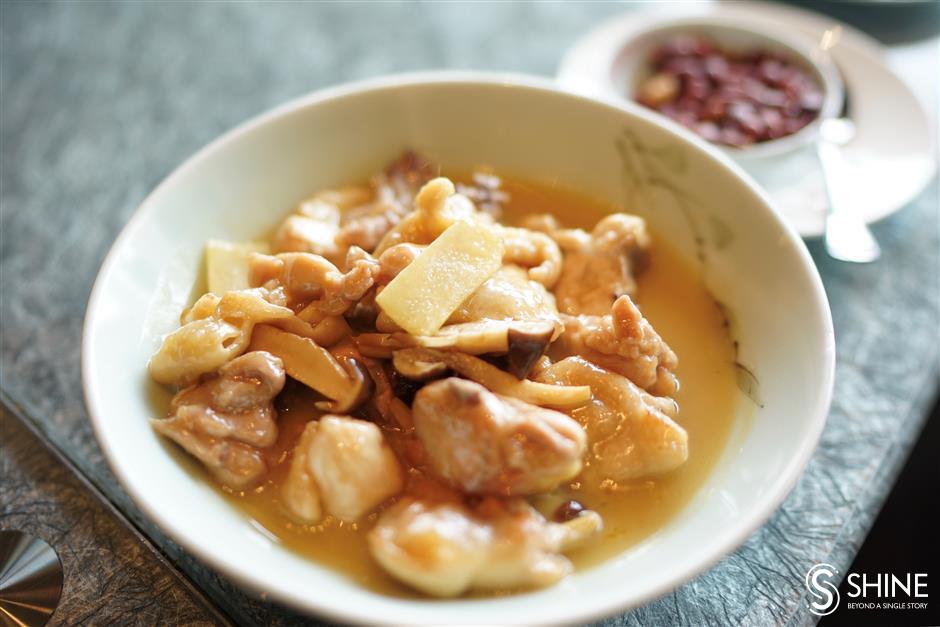 MEAT steakhouse at Kerry Hotel Pudong, Shanghai is now serving a seasonal menu celebrating beef with a touch of creativity.

Executive chef Otto Goh has picked Royal No. 1 oyster and smoked salmon to create an appetizer that enlivens the appetite with a hint of acidity from yuzu jelly and Tabasco lemonade. This is followed by a sweeter and richer combination of foie gras and truffle ice cream served with dainty French toast and five spice Amaretto cherry.

The king prawn and mango are a highlight of the menu. The mango and ginger compote gives the dish a Southeast Asian flair, while the crispy prawn and basil ravioli make it rich and satisfying. 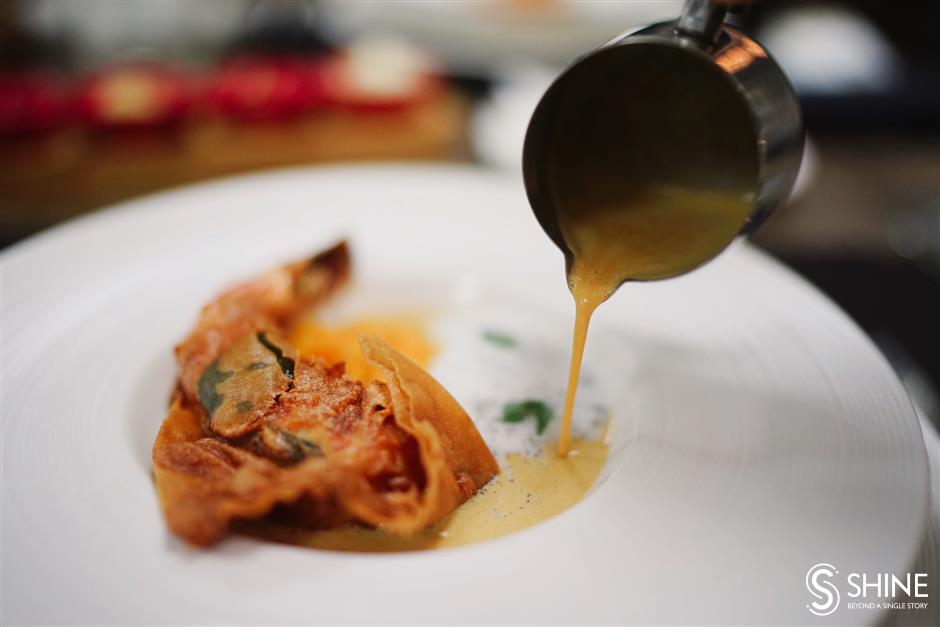 The main course is Jilin beef with Yunnan trumpet mushroom, completed with Iberico ham and Sichuan pepper leaf rice. The pepper leaf has a unique, slightly pungent aroma that won’t overpower the other ingredients. The dish further includes morel mushroom and scallop farci as well as beetroot and pearl tapioca crisp for extra crunchiness.

Goh has also updated the classic all-cut menu which was launched at the beginning of 2019 to celebrate different cuts of beef. The experience starts with beef tartare and foie gras served with potato chips and beetroot crisp, and a warm beef broth with Iberico ham with pan-fried matsutake and river shrimp ravioli. This is followed by two steak dishes: “The King’s Meat” with sundried tomato, poponcini pepper and quinoa farci and Jilin beef.

The six-course seasonal menu is served during dinner hours until the end of September at 580 yuan (US$81) per person. A wine pairing of four glasses is available for 280 yuan. The classic all-cut menu is 1,180 yuan per person, including three glasses of wine. All prices are subject to 10 percent service charge and 6 percent government tax.

The 39-story hotel was designed by acclaimed architects Skidmore, Owings & Merrill LLP. Elements of water unify the exterior and interior of the building, and in the guestrooms, the exterior glass panels slant to provide a broader view of the city landscape. 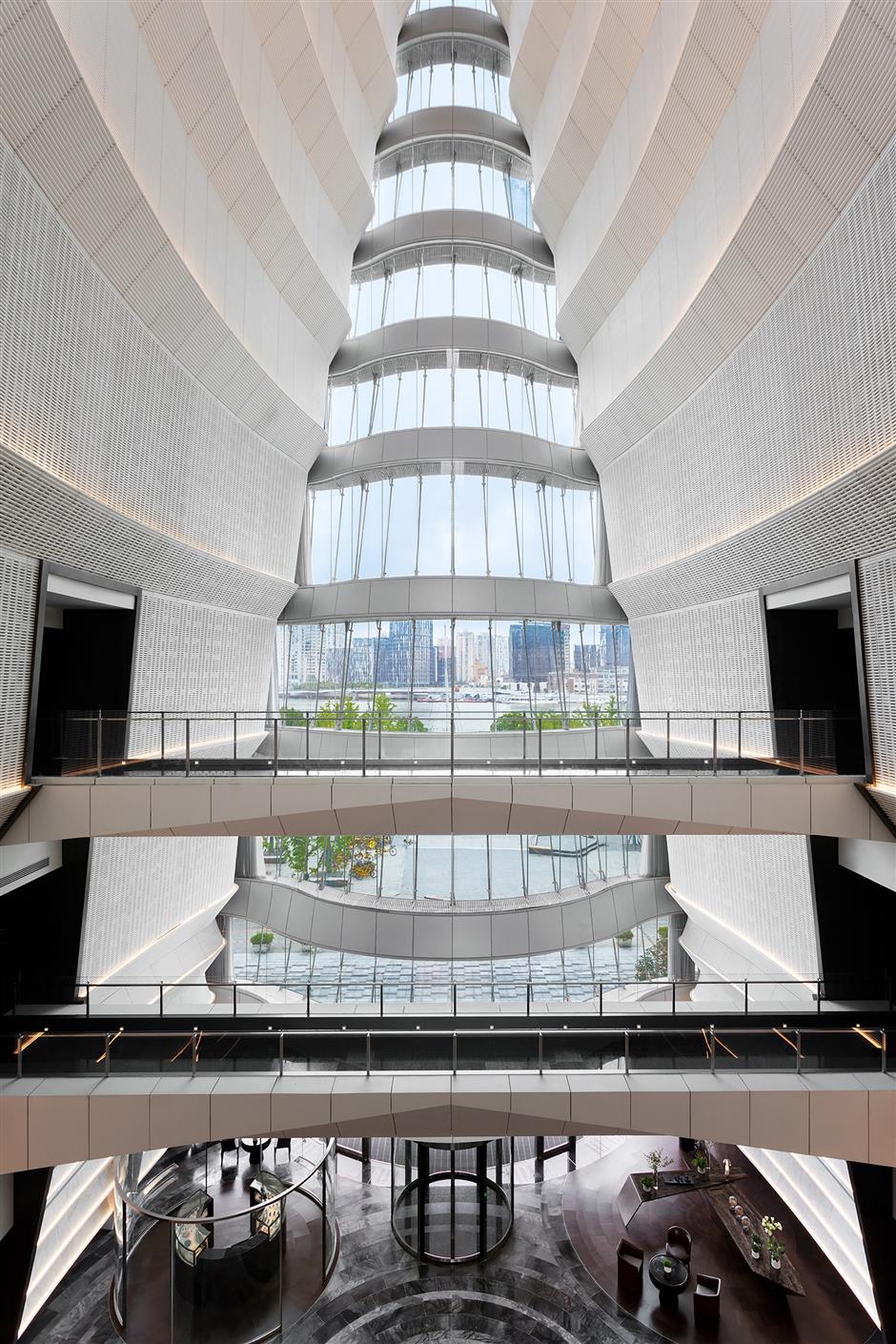 The hotel has multiple dining venues to provide a diverse experience, including all-day dining outlet Merchant Kitchen, stylish bar and grill Flint, Cantonese establishment Le Manoir Ling, and a three-story restaurant mansion which features a stunning rooftop garden. The JW Lounge on the first floor features large bay windows where one can enjoy a relaxed afternoon tea, and the Executive Lounge provides another space for guests to unwind. 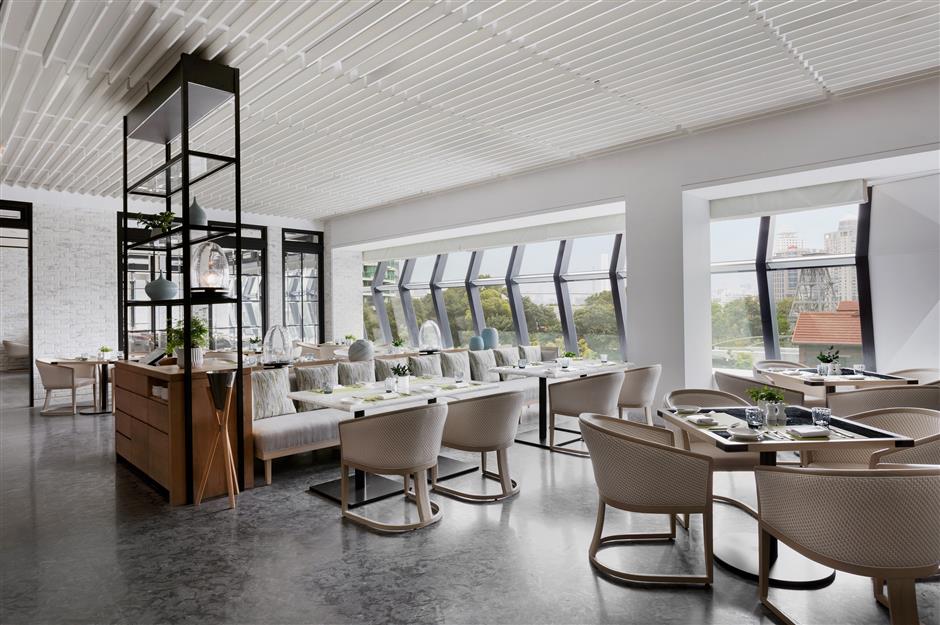 There are 12 multi-functional rooms and banquet venues offering 34,445 squared feet of meeting space. The Junior Marquis and Grand Marquis ballrooms can provide for 600 and 800 guests respectively.

“We are truly excited to expand our JW Marriott Marquis portfolio to four hotels globally and debut our newest addition in Shanghai, China,” said Mitzi Gaskins, vice president & global brand leader, JW Marriott. “JW Marriott Marquis Hotel Shanghai Pudong is set to redefine luxury hospitality in Shanghai, with a forward-thinking design inspired by the surrounding neighborhood, the city’s history and its unique culture. The hotel’s extensive offerings will encourage guests to live in the present, experience life to the fullest and promise an immersive experience that will leave guests feeling nurtured and recharged.” 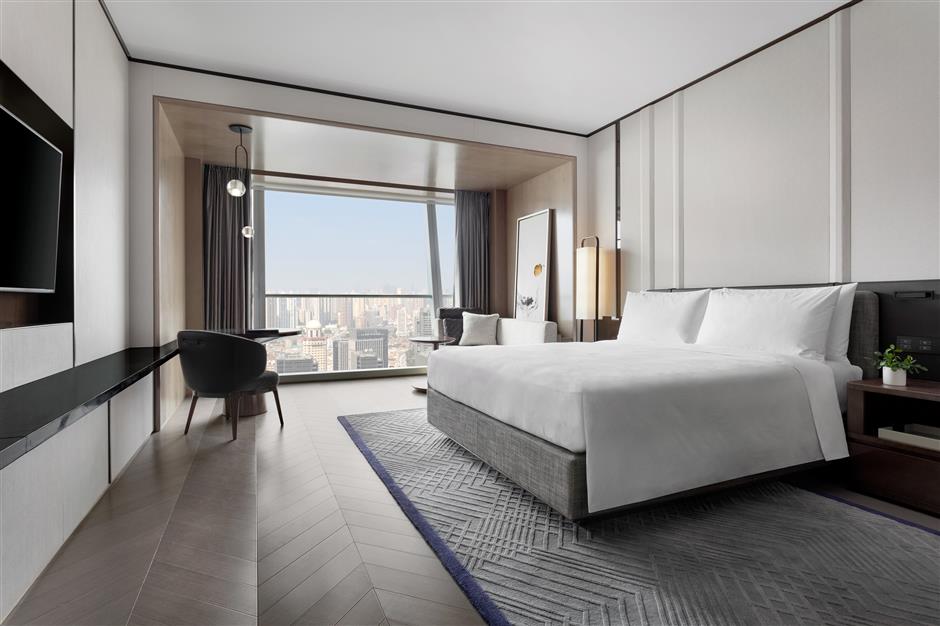 The windows in the guestrooms slant 12-17 degrees to provide a broader view.

After the incredible success of the White Rabbit x Happy Lemon pop-up milk tea shop, the Shanghai-based, time-honored confectionery brand known for its soft milk-flavored candy has now teamed with Godiva to launch limited ice cream pop-ups in Shanghai, Beijing and other cities.

The ice creams retail for 55 yuan per serving. The pop-up has also stepped up efficiency to complete each serving in as little 15 seconds. 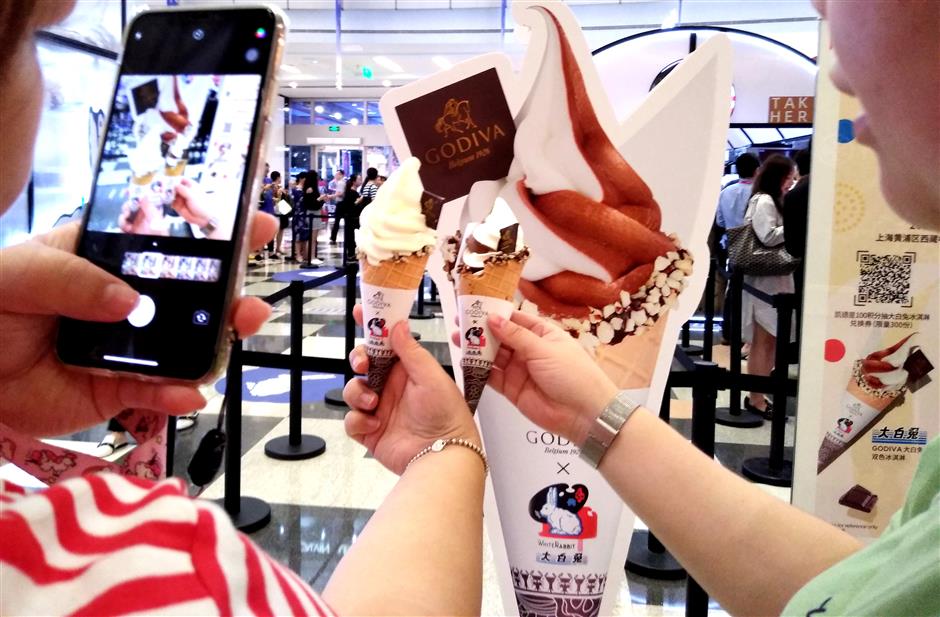