If you want to catch the authentic vibe of genuine Korean barbecue then there is only one place in the city to go — Koreatown in Minhang District.

There is a wide selection of barbecue restaurants and specialized eateries in the area opened by South Korean natives. These authentic places offer a taste of home to the Korean community and to Korean food lovers as well.

The kimchi and barbecue aromas, coupled with the Korean language signs on Yinting Road, makes you think you’re somewhere other than Shanghai, such is the authenticity.

A South Korean friend took me to Zi Xia Men, a restaurant inside a plaza on Yinting Road, close to Hongquan Road.

The entrance displays traditional hanbok, Korean dress for formal attire and the smell of garlic is welcome. 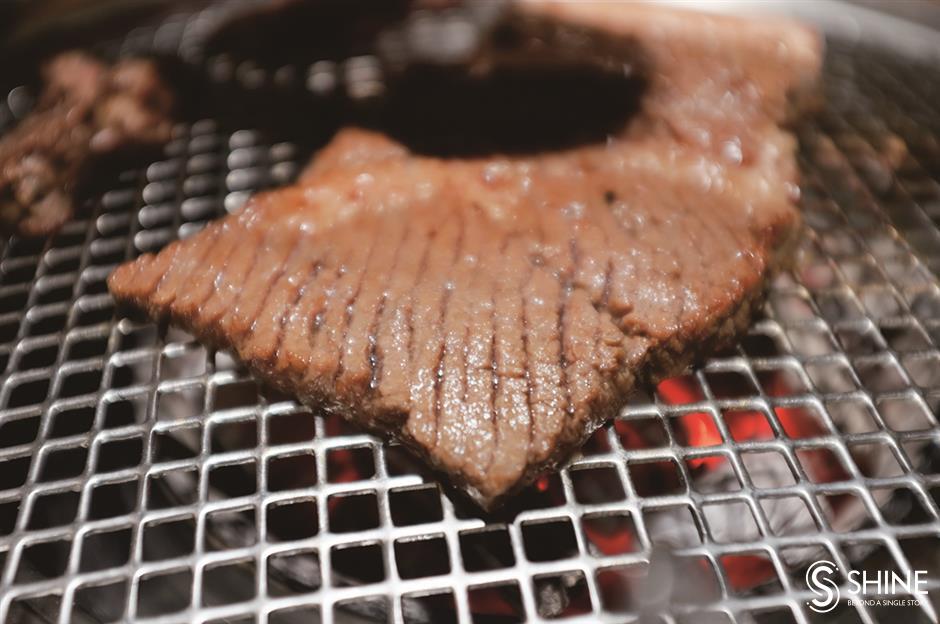 The decoration is rather ordinary like most of the barbecue places. You don’t come here for the ambience, you only come here to embark on a satisfying meat journey.

A typical Korean barbecue includes a few small, shared side dishes called banchan, next to the central charcoal grill.  Banchan can include anything delicious but the most famous banchan, hands down, is kimchi, not just the fermented cabbage kind but also lightly marinated ones, made with bean sprouts, cucumbers and other vegetables.

A single banchan isn’t meant to be eaten alone, you have to find a way of balancing the many tastes and textures of a Korean barbecue meal.

Besides, before the staff grill the ordered meat, a bucket of fresh greens are served for Korean lettuce wraps, which are called ssam. To eat Korean barbecue in the ssam style, you first put a leaf of lettuce in your palm, add a piece of grilled meat dipped in sesame oil, then add a dollop of ssamjang, a spicy Korean dipping sauce and some shredded green onion salad.

Before the staff grill the ordered meat, a bucket of fresh greens are served for Korean lettuce wraps.

The menu considerately suggests the wine pairing for different cuts of meat to maximize the experience. However, we opted for Korean bekseju that is made from glutinous rice, yeast and choice of a mix of Oriental herbs including ginseng, ginger and cinnamon.