Many Chinese people believe that eating the right food at the right time could benefit the body greatly, and apart from using fresh seasonal ingredients, the practice of food therapy that combines delicious cuisine with traditional Chinese medicine elements has been a key part of Chinese lifestyles since ancient times.

From stewing simple soups with medicinal herbs and spices to eating fresh produce such as goji berry buds, eating medicinal food is an important part of Chinese culinary tradition as well something that enriches everyday cooking.

This week, we take a look at some common TCM elements incorporated in Chinese cuisine. 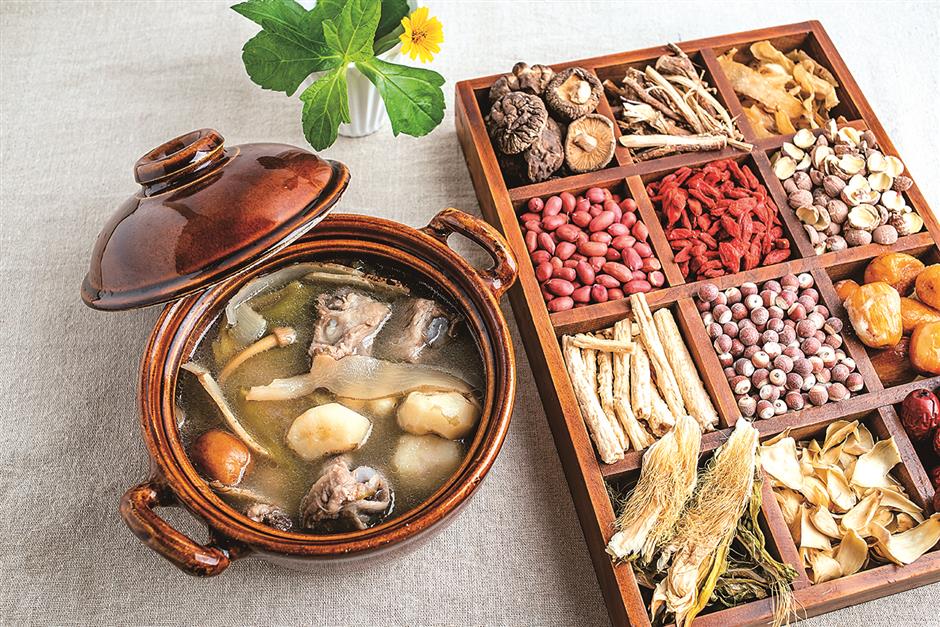 TCM ingredients are added in soups and stews to boost health benefits.

The tradition of medicinal soups

Dishes involving medicinal ingredients originated in ancient China when people established knowledge of both medicines and cooking, and the idea of food therapy was gradually developed as the reason for eating healthy, nourishing food.

The herbs used in cooking generally carry more delightful flavors, such as the sweet jujube and goji berries, dark plums and aromatic apricot kernels, which would not disturb the original flavor of the main ingredients in dishes but add unique fragrance and health benefits.

In some parts of China, particularly in Guangdong Province, soup is an integral part of the local lifestyle and a meal is not complete without a nourishing soup that has been simmering for hours.

Cantonese-style soups are nourishing and delicious at the same time. Various kinds of ingredients — from meat to fungus and vegetables — are simmered for hours in a clay pot or electric cooker, and TCM ingredients are often added to elevate the flavor and health benefits.

The variety of soups is infinite, from rich proteins such as pork trotter and duck to lighter options such as fish, papaya and lotus leaf.

Ginseng, known as renshen in China, is one of the most prized and widely used medicinal ingredients across the country.

Ginseng was already recorded as a medicine in “The Herbal Classic of Shen Nong,” a historical Chinese text on herbalism and medicine. It’s described as “sweet in taste, slightly cold in nature, nourishes the five internal organs, comforts the spirit and soul, improves eyesight and prolongs life after long-term usage.” 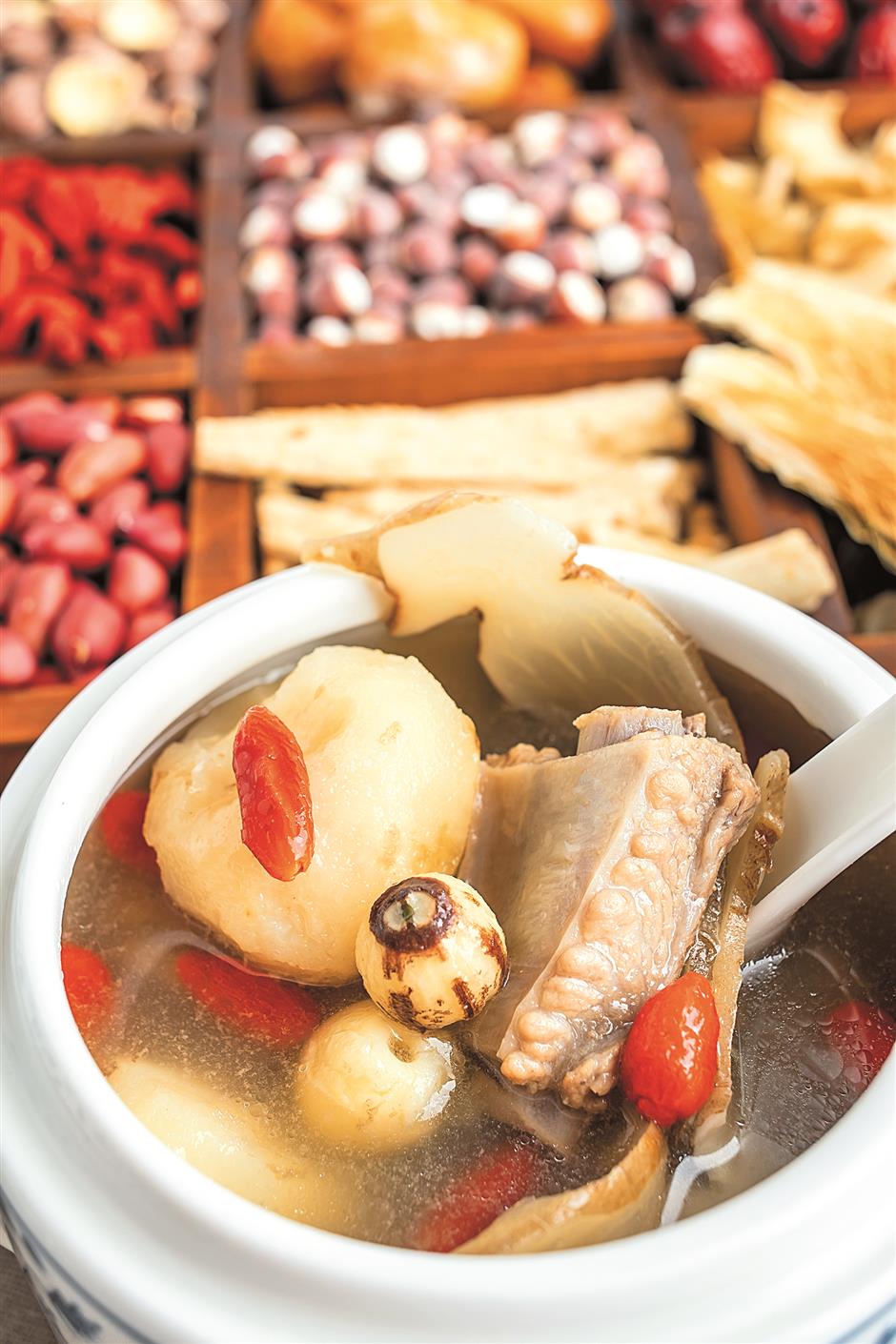 Ginseng honey is a convenient beverage mix that allows people to consume ginseng at any time. Fresh ginseng root is thinly sliced before being soaked in a jar of honey and sealed to preserve in the fridge for three weeks. A tip is to keep the jar as dry as possible because moisture could make the ginseng honey go bad. The ginseng slices can be eaten directly but must be consumed in moderation.

Danggui, or Angelica sinensis, is a native herb similar to ginseng that grows in the mountains, the root of which is a well-known medicine in China for more than 1,000 years and considered especially beneficial for women and treating gynecological disorders.

In cooking, danggui is added in soups, stews and even desserts. It presents a unique sweet herbal flavor that people either love or hate. Classic combinations include danggui stewed with chicken or lamb, egg boiled in danggui and danggui-infused rice wine. 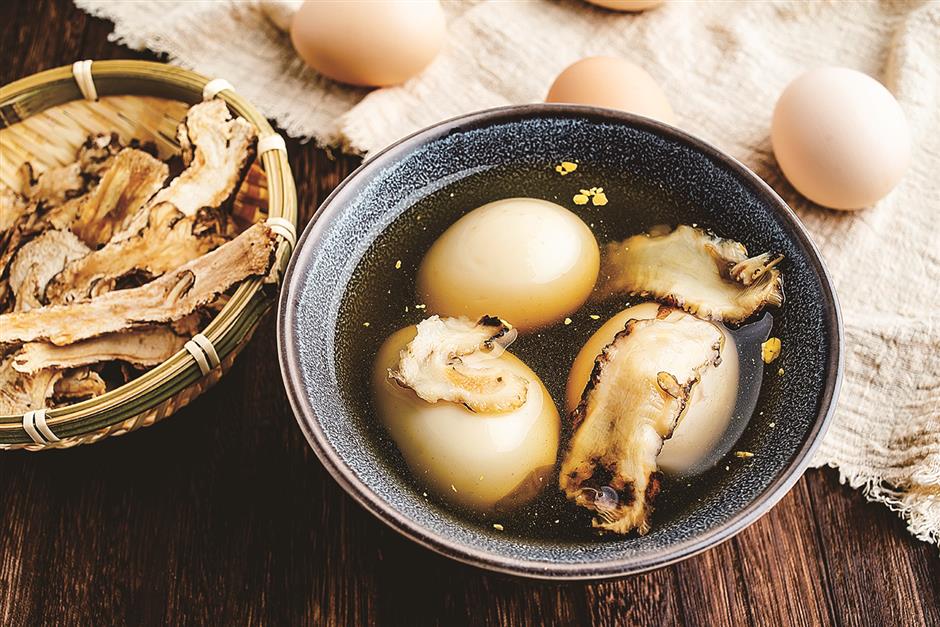 Dandelion is also a TCM food ingredient known for the property of clearing heat. The fresh green leaves can be boiled in water and then served as a salad, or chopped up and mixed in dumpling filling or incorporated in the morning egg pancake.

Not all food therapy dishes contain TCM ingredients, some recipes emphasize the ingredients’ own benefits. Such as eating celery porridge to relieve heat and lamb soup to drive away coldness. The idea is to eat the right food at the right time, and the stronger, more medicinal-like herbs are used in very small quantities in cooking.

Goji berries are a Chinese remedy that have become a superfood in the west. A trendy saying in Chinese social media these days is that the sign of entering middle age is when a person starts to drink hot water infused with goji berries, a lifestyle called yangsheng that means preserving health and well-being.

About two years ago, goji berries became an Instagram “superfood” when numerous people added the berries to breakfast or beverages, a quite fashionable way to eat healthy. In the West, these tiny red berries with their sweet and earthy taste are sprinkled onto smoothies, salads or mixed in healthy shakes. 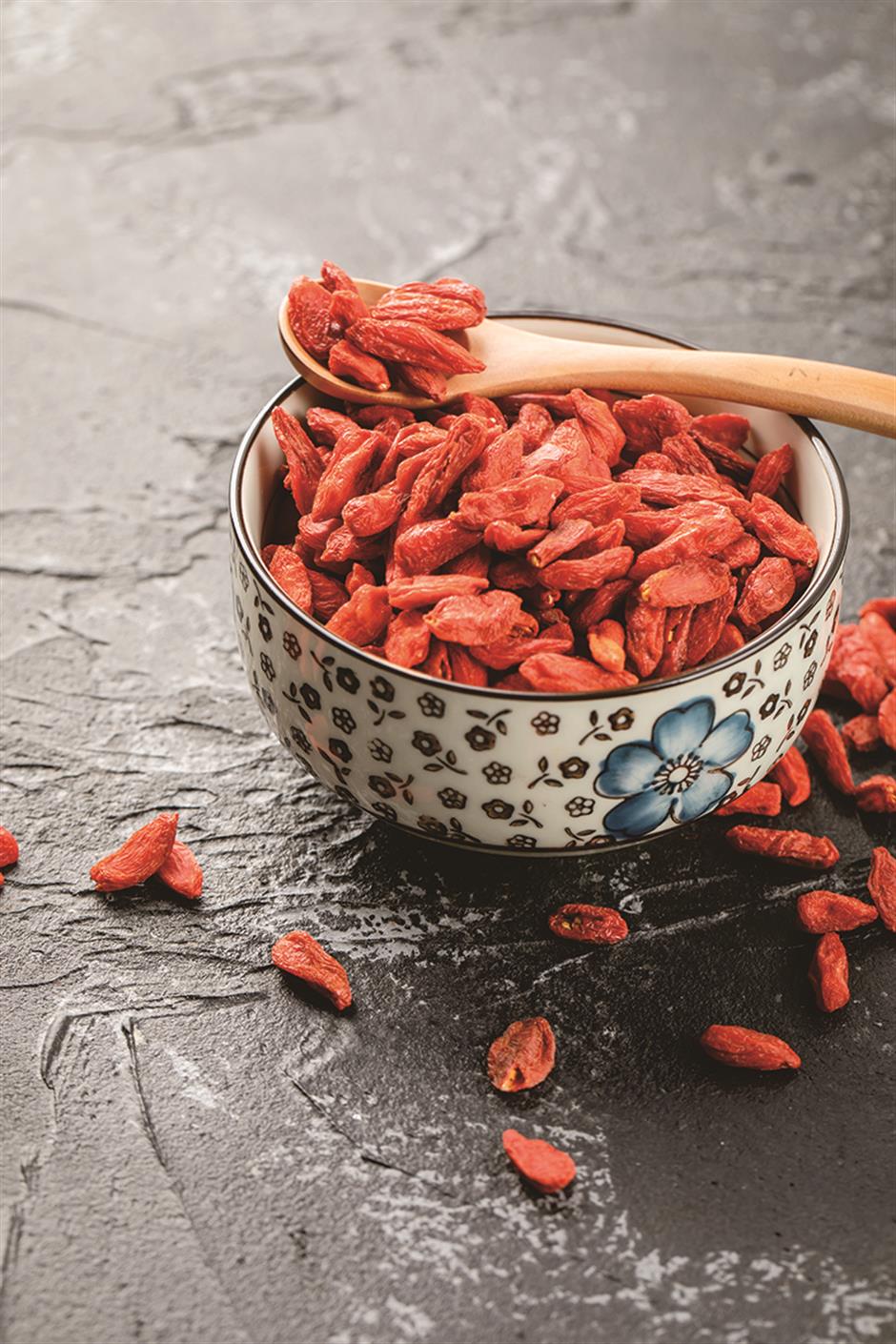 Meanwhile, in China goji berries have long been used as a dietary supplement in traditional medicine. The native Chinese fruit is mostly grown in the northwest Ningxia Hui and Xinjiang Uygur autonomous regions. The berries contain high amounts of amino acids and anti-aging elements such as carotene and vitamins.

In food therapy dishes, goji berries are added in both sweet and savory dishes. When stewing a nutritious soup, a few goji berries can brighten up the color and add a hint of sweetness. In soup-style desserts, goji berries are often cooked with white fungus and jujube berries, and infusing goji berries in hot water with honey and dried longan fruits can make a very sweet beverage for colder days.

Goji buds, the tender leaves of the goji berry plant, have been a popular vegetable in some parts of China with people seeking them for their beneficial properties like anti-oxidatives, aiding sleep and easing internal heat, while presenting a delicate texture and refreshing bittersweet taste.

Convenient ways to enjoy goji buds include a simple salad made with blanched buds and basic seasonings of salt, sugar and sesame oil, boiling the buds with lean pork meat to make soup and stir-frying with some garlic.

Goji buds stir-fry is a dish featured in Cao Xueqin’s “A Dream of Red Mansions,” a masterpiece written in the mid-18th century. It was requested by Jia Tanchun, Jia Baoyu’s younger half-sister by concubine Zhao, and Xue Baochai, Jia Baoyu’s first cousin.