The question is: which chicken?

When shopping in Chinese fresh markets, vendors, especially those selling meat and aquatic products, may ask customers a question before recommending their products: What dish are you making today?

The conversation happens more often with poultry vendors, as different dishes call for different breeds of chicken that can vary greatly in flavor and texture.

When browsing through poultry products listed in grocery apps, there’s always a short description below that describes the best way to cook the specific type of chicken, whether it’s for soup, stew or stir-fry.

This week, we’re taking a look at the common breeds of chicken you may find in Chinese markets and the best recipes. 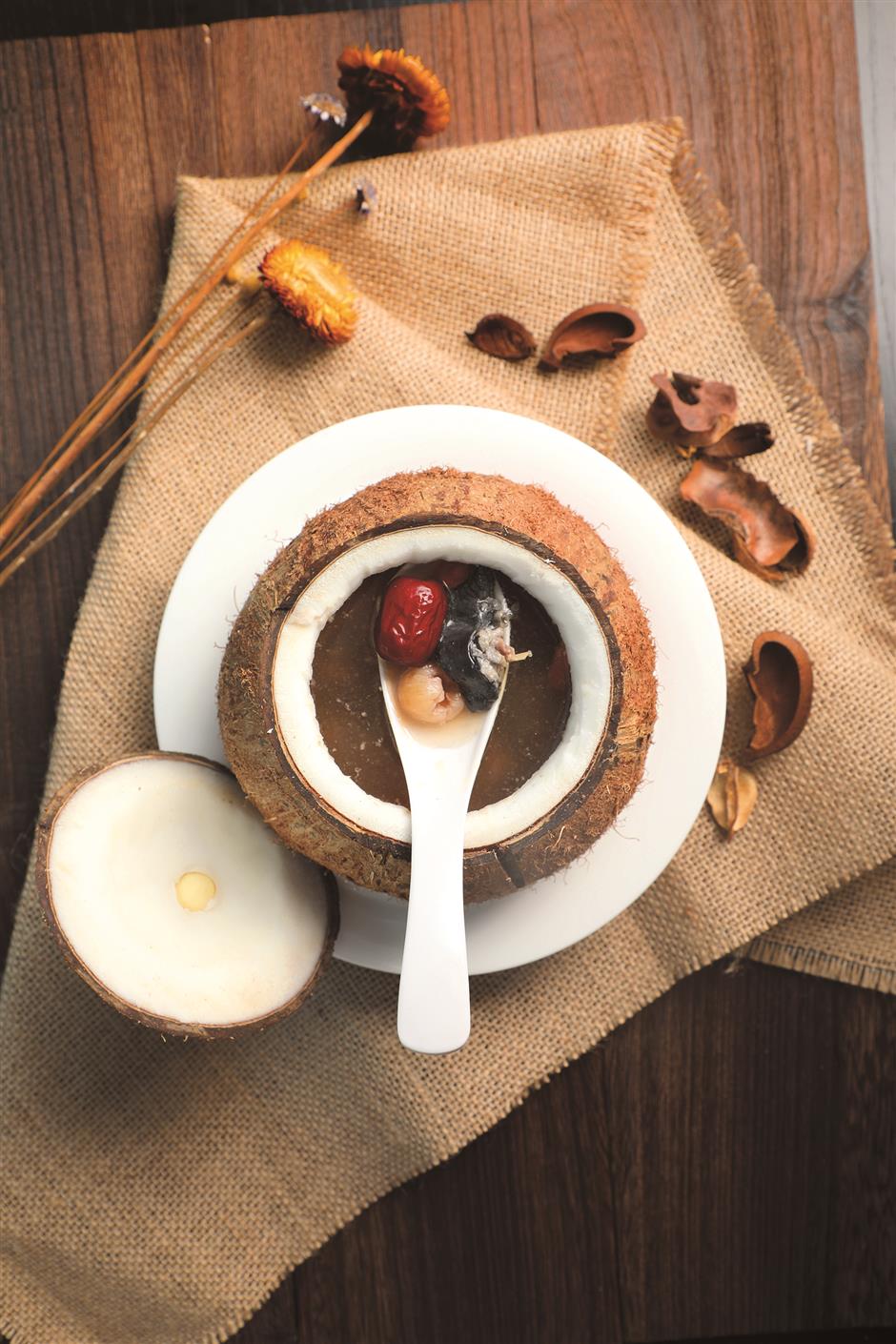 Sanhuangji, or three-yellow chicken, is a very popular breed in China, especially here in Shanghai. The “three yellows” from the name of the chicken refer to the yellow beak, yellow feat and yellow feathers/skin.

Grown sanhuangji usually weigh around 1.5 to 2 kilos, at which point the skin and meat of the chicken is tender with the right amount of fat content, and the bones are relatively soft.

It’s the go-to breed to make Shanghai-style baizhanji, or sliced cold chicken. It’s different from the white-sliced chicken in Cantonese cuisine and preferably uses the sanhuangji from Pudong, which are cooked without the marinating or curing process.

The dish is made with fresh chicken of the day that’s around 3 months old. The skin of the chicken should be perfectly intact and no visible blood clots found underneath. Holding the neck of the chicken, it is dipped in a large pot of boiling water three times to ensure all blood residue and meaty smell is removed, and the skin becomes yellow and glossy.

The chicken is then poached in water for 25 to 30 minutes, and removed from the water at the exact moment it’s cooked. Immediately the chicken is placed in an ice bath to stop the cooking process.

Because of the minimal seasoning and simple cooking method, the quality of the chicken is very important, and sanhuangji, known for its tenderness and fresh flavor, is the breed of choice.

The highlight of baizhanji is no doubt the tender and crisp chicken skin, which has no grease at all and matches the juicy meat in the best possible way. The fat in between the skin and flesh is almost as smooth as jelly. The chicken is served with a flavorful and salty dipping sauce composed of ginger, soy sauce, scallions or shallots.

Sanhuangji is also suitable for making chicken stir-fries or braised dishes, in which large chunks of chicken are fried in a little bit of oil with ginger, garlic and dried chili, seasoned and colored with soy sauce. Water is then added so the chicken will cook fully and absorb the flavors. The dish often features vegetables that can be cooked for a longer time, like potatoes and mushrooms.

However, the tender sanhuangji is not the best option when you are making chicken soup as the meat may break apart.

In southern China, there are two well-known breeds of chicken, the Wenchang chicken from Wenchang in the island province Hainan, and Qingyuan chicken from Qingyuan in Guangdong Province.

Both breeds are specially used in the local cuisine, and they’ve become more popular in other parts of China because of their extra tender meat and flavor.

Authentic Wenchang chicken is a free-range breed that feeds on insects and wild berries with additional carbohydrates such as millet and sweet potato. The chickens are raised outdoors for the first few months and then spend another two in captivity to reach the ideal meat quality.

Wenchang chicken is used in two all-time classic dishes, Hainanese chicken rice and coconut chicken soup (or hotpot). Both recipes require a short cooking time and the tender Wenchang chicken is ideal. It also has a mild sweetness that goes very well with fresh coconut water.

When enjoying a coconut chicken hotpot, the first thing to do is to have a bowl of original coconut chicken soup without adding any seasoning. The chicken is usually enjoyed with a dipping sauce of soy sauce, red chili, galangal and calamansi.

Qingyuan chicken is quite similar to Wenchang chicken: tender meat and smooth skin. The chicken is usually raised for four to five months, and they are suitable for all types of cooking, such as steaming, braising, stir-frying and roasting. It is used to make the Cantonese-style white sliced chicken, the skin of which is a classic yellow. 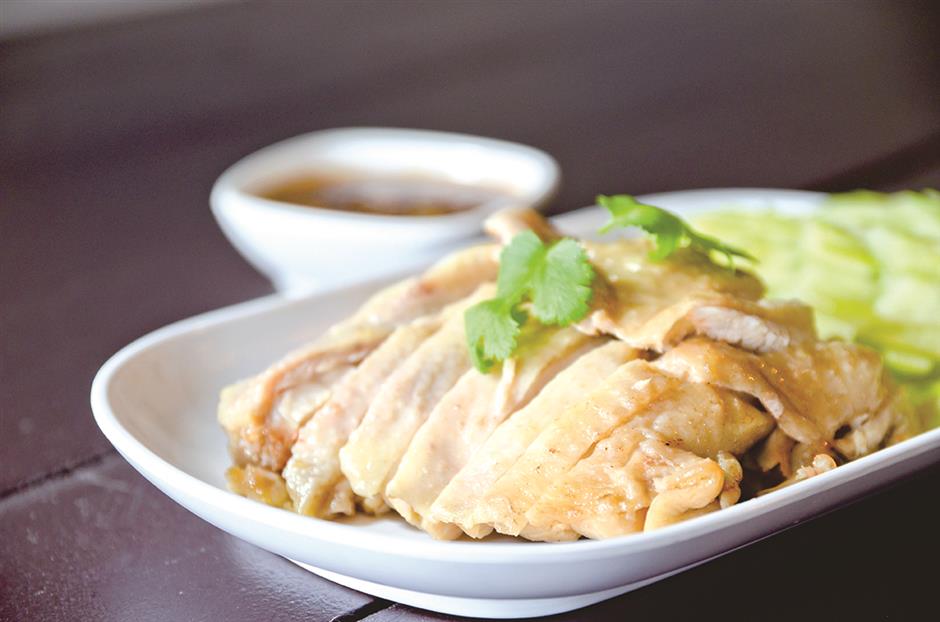 “Old hen,” or laomuji, which commonly refers to hens that have been raised free-range for over a year, is one of the myths of Chinese chicken cuisine, as parents and grandparents always seek out the best free-range “old hen” to make utterly rich chicken soup, which is a centerpiece dish found at family banquets.

Chicken soup is regarded one of the most nutritious dishes in Chinese cuisine. It’s a slow-simmered soup made with the best-quality chicken and chicken only — no vegetables such as onions, celery or carrots, are added in this Chinese-style chicken soup. An original chicken soup only calls for ginger to neutralize the meaty flavor, salt to taste and scallions as garnish.

An ideal chicken soup should be skim clear with a golden hue and light layer of oil from the chicken fat. The chicken is boiled in water first to remove excess blood residue, and then placed in a pot, preferably a clay pot, with enough water and slices of ginger, to make the soup.

The reason behind using old hens to make chicken soup is that the stronger texture of well-grown chicken makes it more suitable for a longer cooking time. The bones of the chicken are also much stronger and pack more flavor, so is the fat content that provides the aroma.

Some herbs from traditional Chinese medicine are added to the chicken soup to boost health benefits, such as ginseng root — sweet in taste, slightly cold in nature and nourishes the body; danggui (Angelica sinensis) — especially beneficial for women with sweet herbal flavor; and dangshen (Codonopsis root) — mild in nature and nourishing to the organs. These herbs can carry stronger, more distinct flavors.

The additional ingredients Chinese people would add into the chicken soup are rehydrated dried shitake mushrooms, goji berries and jujube.

Chicken soup with fish maw is an upgraded, more luxurious variation of the traditional recipe, as fish maw is considered a collagen-boosting ingredient and the combination with chicken soup can elevate the flavor and nutritional value.

As good and nutritious as old hens are, this type of chicken isn’t suitable for stir-fried, stewed or braised dishes, as the meat can be hard to chew. 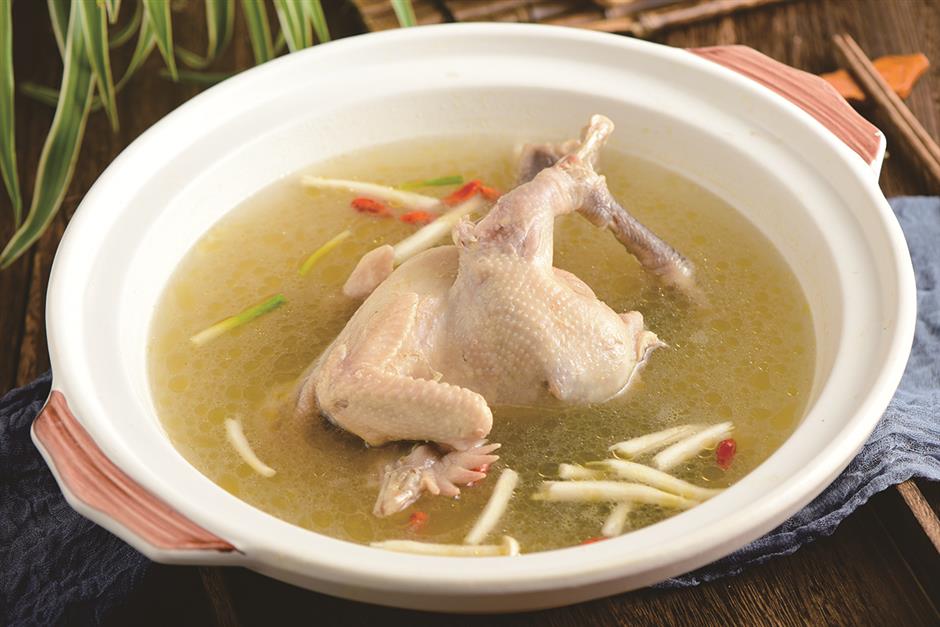 Silkie chicken holds a special place in Chinese cuisine, where it’s known as wuguji, or black-boned chicken. The white-feathered chicken has black skin and bone and packs high amounts of amino acids.

It’s highly regarded for its medical and nutritional values and silkie is more expensive than regular white skinned and boned chicken. Silkie is most commonly made into chicken soup with jujube, goji berries, ginger and other optional TCM ingredients.

Special Reports
ADVERTISEMENT
The question is: which chicken?
Don't forget the wine with your lunchbox
An ancient treat that can be good for your health
Meal prep the way to an ideal lunch
Lucky Mart's purr-fect highball and konbini
Pho To Shop for a flavorsome Vietnamese food trip
All the beef, but none of the meat
Wine pairing with faux meats
Tiny seeds pack powerful punch
Albarino's fresh, palate-pleasing adventure
EXPLORE SHINE