Gourds a gift to delight and refresh

When the appetite is gloomy in the hot and muggy summer, fresh produce and light flavors are here to come to the rescue.

The green gourds from the Cucurbitaceae family in particular are delightful and refreshing gifts of the season. They are tender, healthy and cheap.

Cooking the summer gourds will also save you spending too much time in the heat of the kitchen as delicious dishes can be ready in just a few minutes.

The gourd family includes members such as cucumber, zucchini and even watermelon and pumpkin. This week, we’ll take a look at three unique summer gourds, the luffa, chayote and bottle gourd, and how to enjoy these summer delicacies in simple ways. 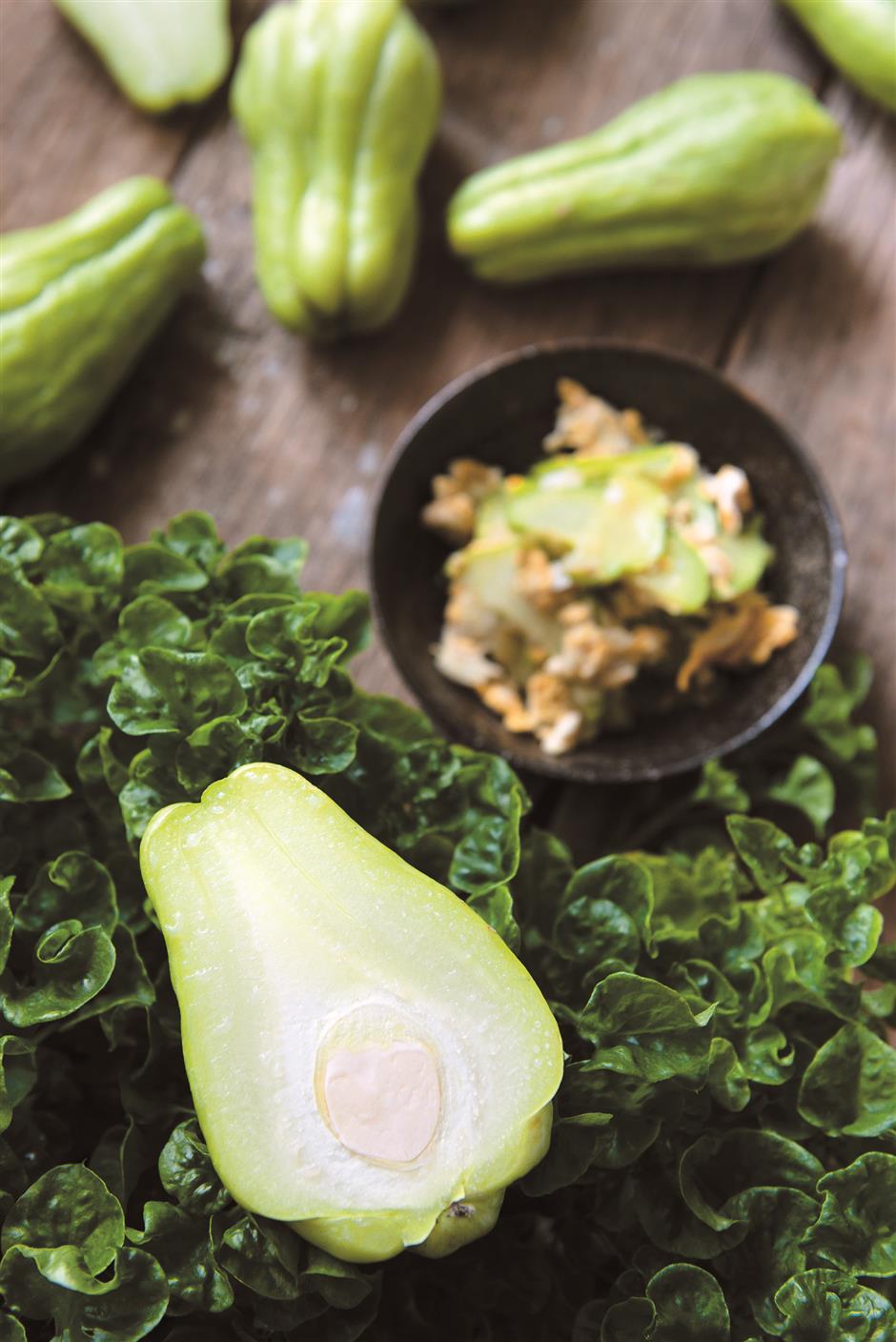 The tender, healthy and cheap gourds form the basis of several delicious and easy-to-cook favorites.

Also known as towel gourd, luffa is among the favorite summer vegetables in China. It’s not only delicious and easy to cook, but also has heat-clearing and detox properties according to traditional Chinese medicine.

The luffa has a meaty texture in contrast to the rough and thick skin, and that makes it a more versatile ingredient that tastes delicious alone or with other proteins or vegetables.

Stir-frying fresh luffa with garlic is the quickest recipe to enjoy the vegetable. The trick of keeping luffa as green as possible in stir-fries is to sprinkle some salt on the slices or small chunks of fresh luffa and let it sit for five minutes, longer than that the vegetable would start to lose moisture.

Then cook the luffa in hot oil on a high heat and stir constantly until a little bit of the moisture comes out and the vegetable softens. Don’t cover the lid and stew to preserve the freshness.

If you don’t want to stand by the stove in a hot kitchen, luffa can be steamed alone, with minced meat or shrimp stuffed in the middle of the luffa rings and steamed for a few minutes. You can also use soaked cellophane noodles and a decent amount of garlic to make an equally aromatic vegan version, as the noodles will absorb the delicious juice of the luffa. The luffa ideal for the steaming method should have a high moisture content.

Luffa and egg is another traditional pairing that brings out a unique umami taste, they can be stir-fried together or made into a luffa and egg drop soup for dinner — a three-step recipe of sauteing luffa, adding water and bring to boil and pouring in a whisked egg. The secret weapon in a delicious luffa and egg drop soup is drizzling a few drops of fragrant sesame oil. Mushrooms of mild flavors can also be added to the soup to boost texture and taste.

One thing to keep in mind when cooking and eating luffa is to discard the ones with bitter taste, which can cause food poisoning.

A vegetable in the summer, luffa will transform into a handy cleaning tool when it becomes fully mature and dried. It can replace a sponge to clean the stove, dishes and furniture without leaving any scratches. 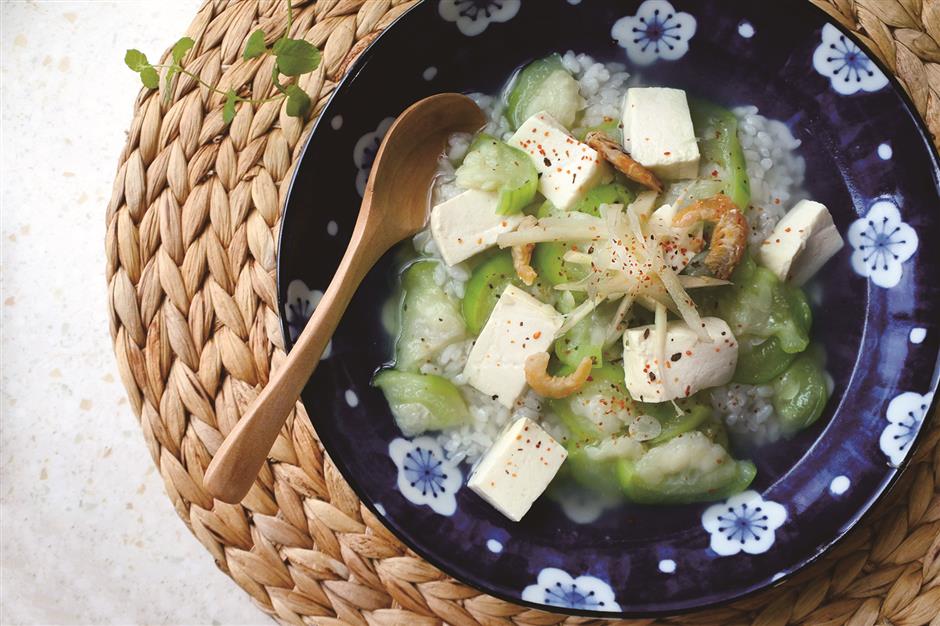 Chayote, a quite unique vegetable usually consumed during the summer, originated in Central America, Mexico and the West Indies. It’s a vibrant green-colored, pear-shaped fruit with edible flesh and skin. The tops and shoots of chayote are also edible and more commonly seen in Southeast Asia, but in China people mainly eat the hearty fruit as a squash or gourd.

A light chayote stir-fry seasoned with salt, garlic and sugar is a quick way to enjoy the crispy texture of the gourd. Slicing it in thin shreds will reduce the cooking time and preserve as much of the original flavor as possible.

A simple chayote salad is ready in minutes after blanching thin shreds of chayote and tossing them with green pepper slices and a dressing of light soy sauce, sugar and sesame oil.

For a richer tasting dish, stir-fry thin slices of the fresh vegetable with some spicy Chinese sausage or cured pork, ideally the kinds with some fatty parts as they present more flavors.

While luffa is often cooked in lighter soups with ingredients such as egg or shrimp, chayote can be paired with much richer meat choices like pork ribs, duck, Jinhua ham and even fish in soups and stews after a longer cooking time.

Some people would use chayote to make pickles, as it has a likeable crunchiness and can be eaten raw. The pickled chayote can last a few months when properly stored. 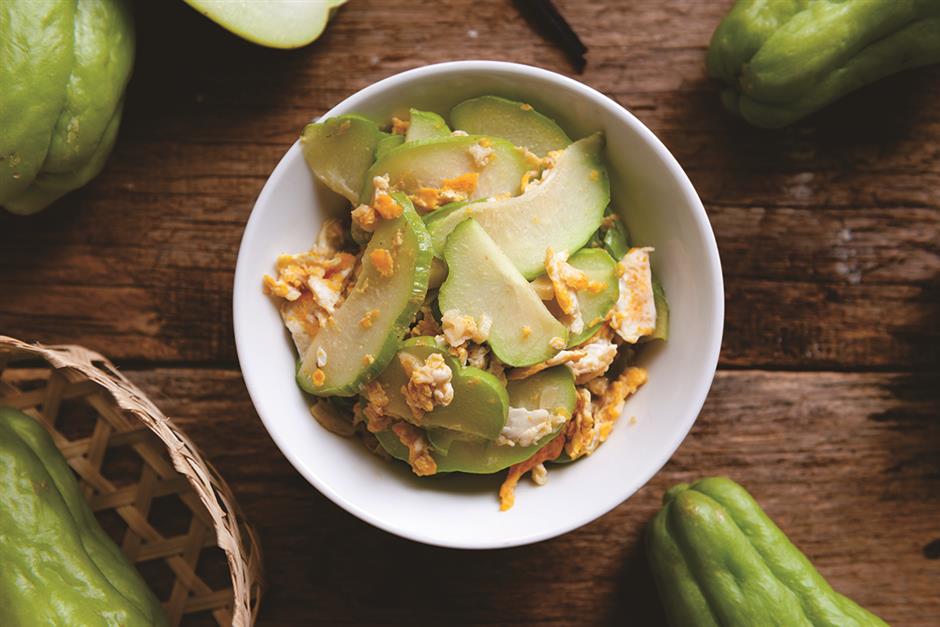 Bottle gourd, or hugua, has an interesting nickname in Shanghai: The night bloom, as the plant prefers to flower during nighttime. The nickname is actually more widely known than its actual name.

Bottle gourd has a unique natural sweetness and is usually cooked without the skin. Like other summer gourds, bottle gourd is commonly stir-fried in a chunk form with garlic and ginger, the key is to achieve the right texture that fully cooks the gourd without turning it soggy. For richer flavors, stir-fry bottle gourd slices with lean pork and green chili.

A special way to enjoy bottle gourd is to slice or grate it into thin shreds and mix them in a flour batter to make pancakes, a soft textured savory breakfast item that pairs well with soy milk.

There are different cultivars of bottle gourd that are in different shapes and flavors. The longer, thinner gourds are usually consumed as a vegetable, while the big bottle gourd can be made into various items like water ladles, bottles, toys and even musical instruments after the fruit is ripe and dry.

In ancient China, bottle gourd was an important ingredient in making hulusi, a gourd flute that produces elegant sound. The woodwind instrument has a unique design of attaching two or three pipes under a dried bottle gourd, and creates the sound by blowing through the mouthpiece to vibrate a reed.

If you want to experience the gentle and soft sound of hulusi, you can search “Phoenix-tail Bamboo Under the Moon,” a folk song of the Dai people in Yunnan Province. 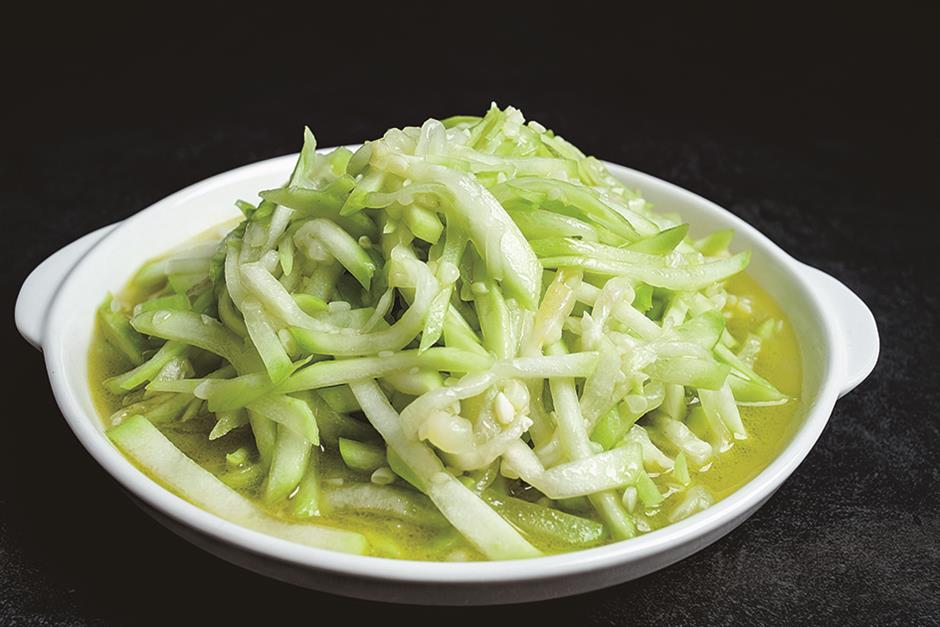 ﻿
Special Reports
ADVERTISEMENT
Gourds a gift to delight and refresh
For a spice of suancaiyu, Tai Er hits the spot
Chilling out with a drink of tea
Keeping it clean in the kitchen
Summer freshening cucumbers and wines
Toast to hygiene and good health
Tasty French plates, natural wine and fun
Authentic Korean fine dining
2020 a fun year for ice cream lovers
Eating less sugar crucial for health
EXPLORE SHINE