Just a splash can make a difference

Sometimes, adding a splash of spirit or wine is the secret to elevating the fragrance of a common dish. The humble green vegetable, toothed bur clover, can wow a crowd at fancy feasts when it’s cooked with the best and finest Chinese spirit, and aged rice wine makes meat stews tender and more flavorful.

Winemaking has over 5,000 years of history in China, starting from the naturally fermented wine that thrived in the Longshan Culture (2500-2000 BC). The essence of Chinese winemaking is brewing wine with jiuqu, which is a wine fermentation starter. The ingredient is used to produce both grain wines such as rice wine (huangjiu) and distilled liquor (baijiu), plus jiuniang, sweet fermented glutinous rice.

Rice wine and distilled liquor are the two alcoholic drinks most commonly used in cooking savory dishes in Chinese cuisine. They not only remove fishiness from raw meat and seafood, but also add a charming flavor. 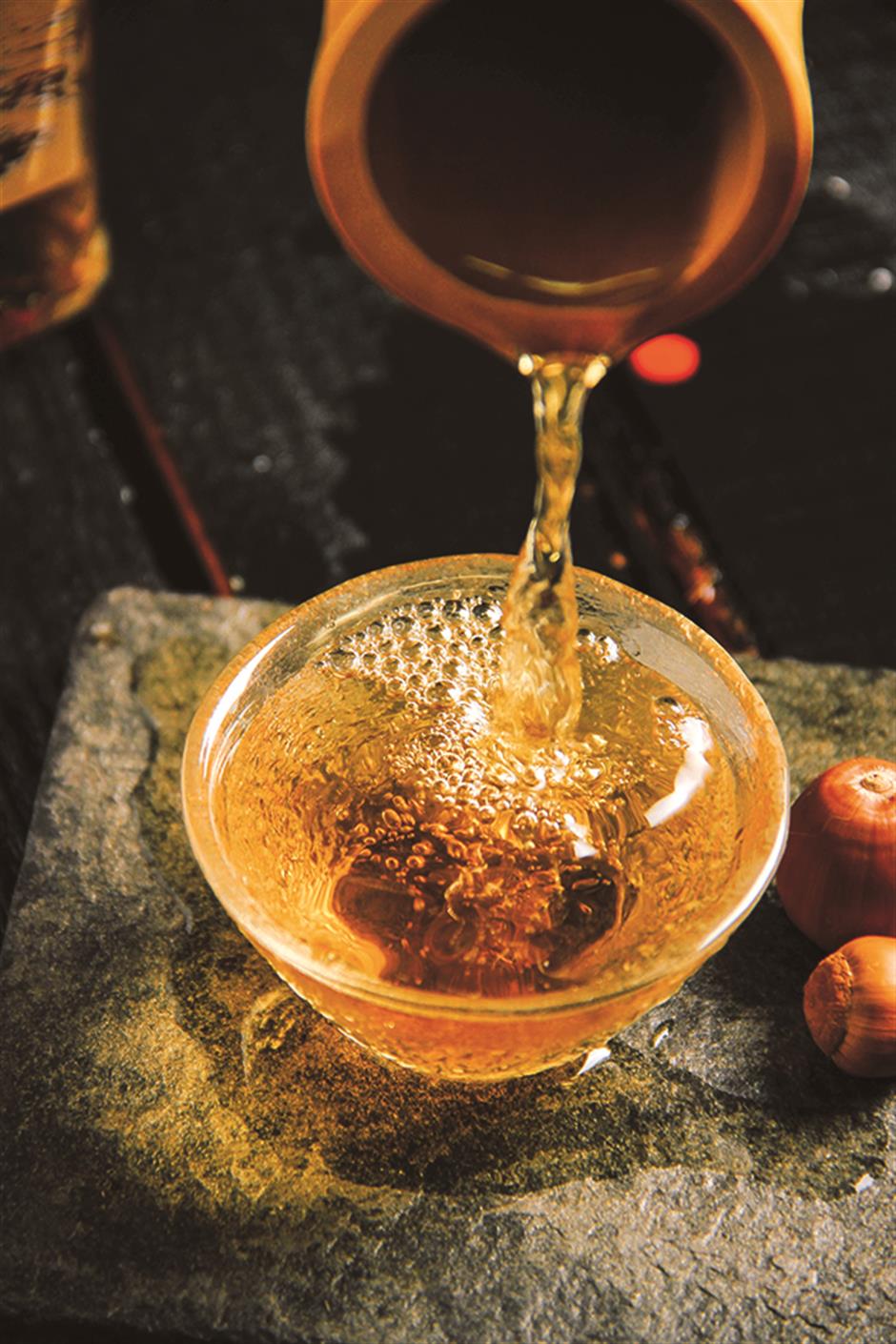 Huangjiu, the rice wine that’s especially popular in Jiangnan (regions south of the lower reaches of the Yangtze River), was the elixir that took winemaking to a new level. Before rice wine, ancient people were drinking mostly zhuojiu, a quite primitive form of wine with a low alcohol content, as well as fruit wines, milk wines and spice wines.

The evolved brewing techniques of rice wine achieved different flavors and textures such as dry, semi-dry, semi-sweet and sweet according to the sugar content.

The two types of wine serve different purposes in the kitchen. While the original rice wine can be used to add fragrance to dishes, tenderize the meat or as the base for a brine to make drunken delights, liaojiu, with an average alcohol content of 15 percent, is mainly used for the purpose of removing the meaty or fishy tastes in meat and seafood.

For example, before cooking pork short ribs or some freshwater fish with a strong smell, marinating the raw ingredients in liaojiu with ginger and scallions can be effective in removing any unwanted odors. A splash of liaojiu can also be added in braised and stewed meats to neutralize the meaty flavor and add to the rich flavors of spices.

Aged rice wine can also be used to make braised chicken and beef. The spices and herbs can be added separately so cooking wine is not a must, and high-quality rice wine can greatly elevate the flavor. 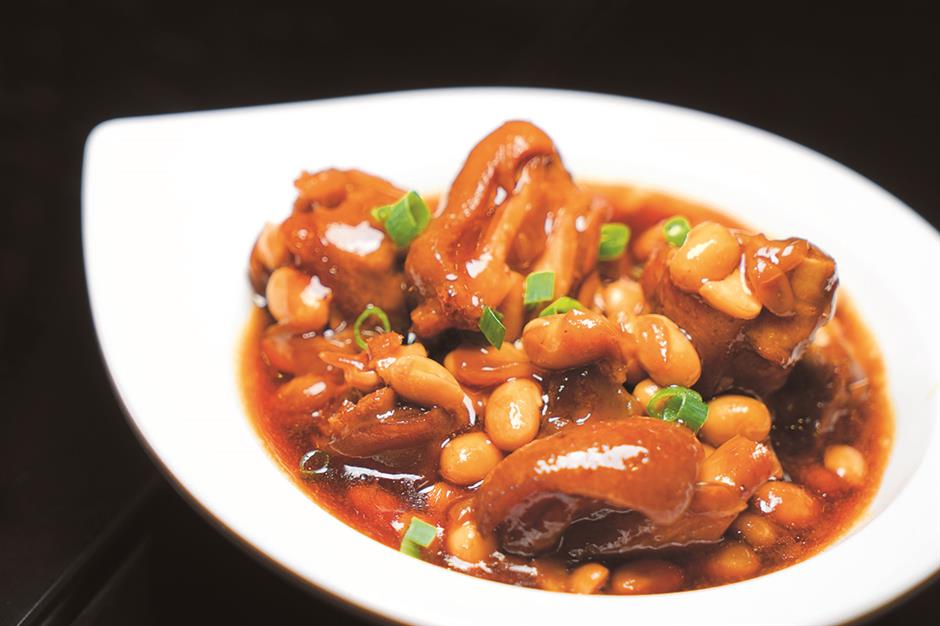 As liaojiu presents a strong taste of spices, it’s not suitable for using as brine for drunken dishes. A typical recipe for drunken crab or shrimp is rice wine, salt, sugar, light soy sauce and chilis plus a large amount of ginger and garlic.

Classic drunken dishes use live crabs and shrimps that are soaked in the rich brine raw. The flavor of the raw crab and shrimp dishes is strong (which some people may find it hard to accept) and can pose food safety risks, so restaurants aren’t allowed to sell them. Using cooked crabs and shrimps is a safer solution to enjoy drunken dishes, and the best wine for the job is the mild, semi-sweet rice wine.

Egg in rice wine is a sweet dish traditionally served to women who have just given birth. Today it’s a simple homemade dessert for the colder weather. It’s prepared by boiling rice wine with some brown sugar, then the eggs are cracked open and poached in the sweet soup. Thin shreds of ginger are an optional ingredient to bring up the warm property of the recipe. 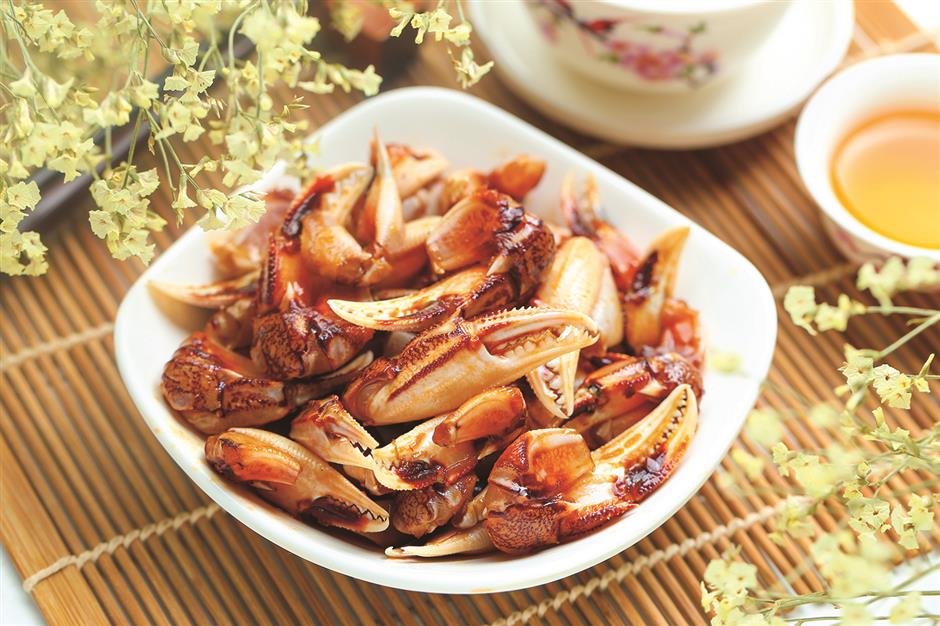 Zao is a food preparation technique in Jiangnan that produces fast and simple appetizers that can help with reduced appetites in the hottest summer months. Cooked and chilled meat, vegetables and seafood are simply soaked in a brine called zaolu, which is made with the sauce extracted from aged distilled grain and then seasoned with herbs and spices.

Zaolu dishes present a very strong rice wine fragrance, and a classic platter often features edamame (green soybeans in pods), shrimp, duck tongue, goose feet, pork tripe and so on. The zaolu sauce comes in glass bottles at a very cheap price, one only needs to buy the brine and let the cooked ingredients absorb the salty and rich flavors. 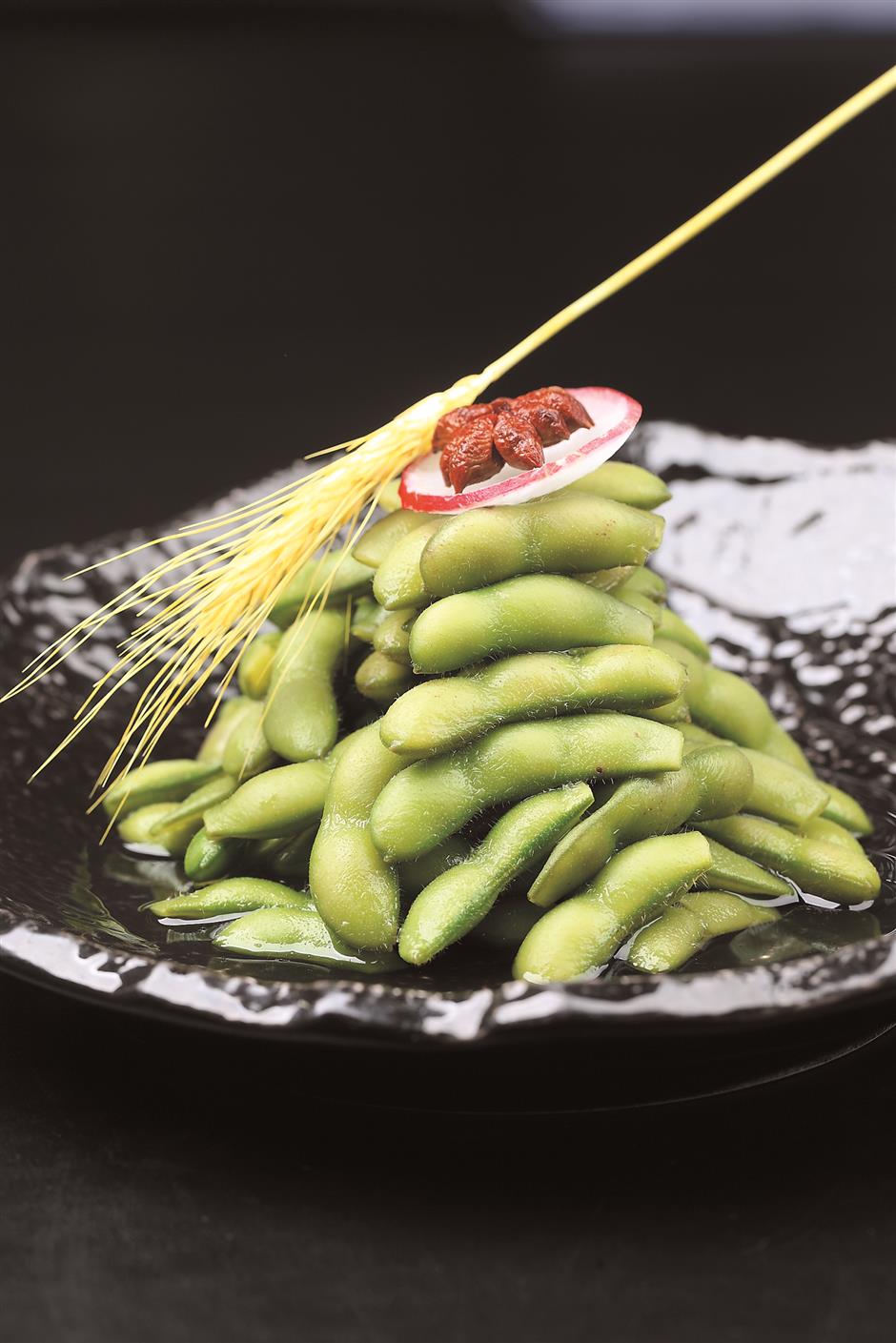 Baijiu, or white spirit, is a strong Chinese liquor with a distinct flavor and a traditional condiment in Chinese kitchens.

In braised meat dishes, such as pork belly meat, duck leg and pork trotters, one or two tablespoons of the spirit are sometimes added in the browning process to eliminate the meaty smell.

The alcohol will evaporate in the high heat and the flavor will tone down in the rich sauce.

In Shanghai, baijiu is used to stir-fry green vegetables such as the toothed bur clover, a very light green herb that’s quickly stir-fried on a high heat for a minute before pouring in a sauce of baijiu, sugar, salt and a little bit of light soy sauce (optional), then quickly stirring for another 30 seconds before the dish is ready. The unique fragrance of baijiu lingers in every bite, and better-quality liquor always presents better flavors in the dish. 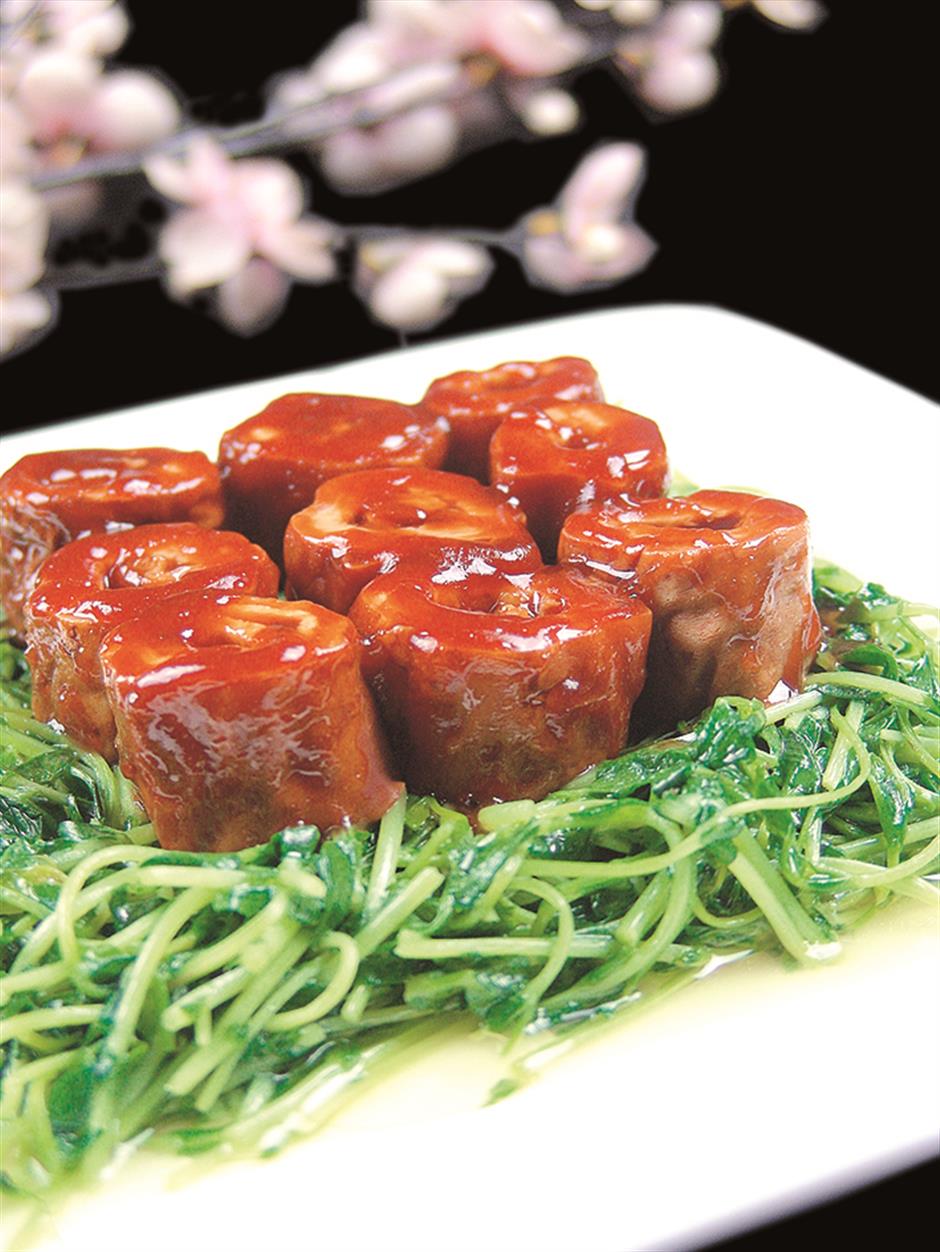 Greens cooked with baijiu and topped with pork intestine

Sweet and tender pea sprouts can also be stir-fried with baijiu with the same recipe. The toothed bur clover is sometimes served with stir-fried pork intestine on top, presenting a delicious contrast of rich meat and refreshing vegetable.

A variation of drunken dishes is called qiangxia. This uses small, live shrimps that are soaked in baijiu, with the shrimps becoming motionless quite quickly in the strong liquor. Then the dish is seasoned with a dressing of minced garlic, sugar, soy sauce, chilis and cilantro before serving.

Another key use of baijiu in Chinese cooking is in pickles, such as chili sauce and fermented tofu. To make salted duck eggs, the cleaned and dried raw eggs are covered with a coat of baijiu before they are put into a container with brine. The liquor not only kills bacteria, but also gives the yolk an oily texture.

Cured sausages also use baijiu in the mince to boost flavor. 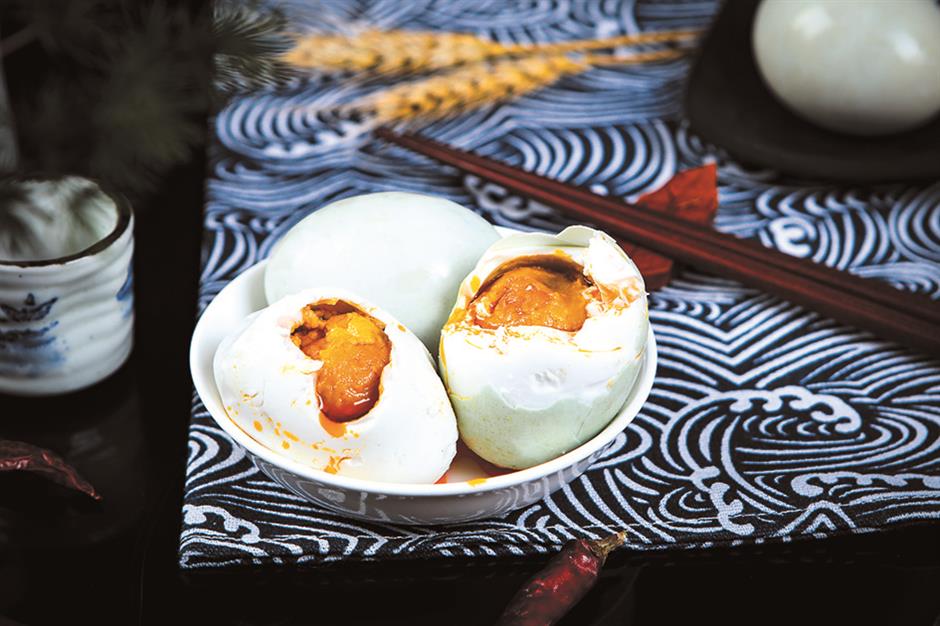