City's restaurants back on track as pandemic fades

For restaurants, the year 2020 was started off with uncertainties.

There were closures due to the impact of COVID-19. Hakkasan Shanghai, for instance, closed on May 27 in order “to preserve the long-term stability of our business,” though it’s rumored it will return this fall with the original staff under a new owner.

A great number of restaurants didn’t have dining-in until late February and early March, while some stayed open and coped with the situation the best way they could, hoping to survive through the winter, and some are actively searching ways to boost business once life is back on track.

The results have been rewarding, with many restaurants starting to see business return to normal in late March and early April, making more money year-on-year.

Different types of restaurants with different clientele reopened at times that suited their situations best. 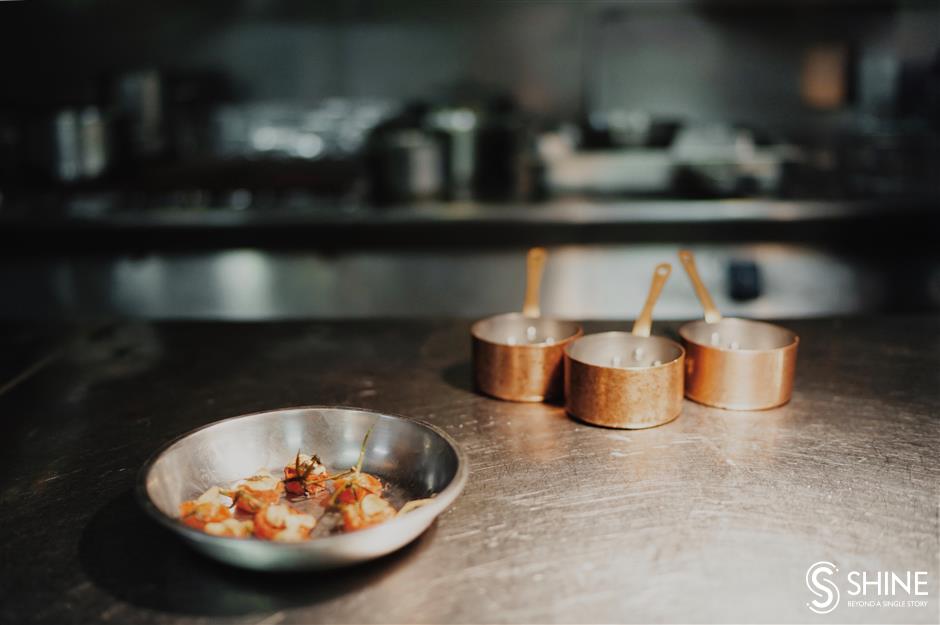 Restaurants that withstood the challenges of COVID-19 are seeing better revenue compared with the previous year.

Italian fine dining restaurant 8 1/2 Otto e Mezzo BOMBANA was due to close between January 24 and 30 because of the Chinese New Year holiday, but that break was extended to March 2, an additional, unexpected one-month closure that canceled a Valentine’s Day promotion already in place.

Executive chef Riccardo La Perna said the restaurant started to do more cost control in order to save money, and they managed to keep the staff on. However, two Italian staff didn’t return due to later travel bans.

“The extended closure was a disaster for the economy of the restaurant, but we decided not to cut staff and cut some costs, like power bills, expenses like the budget for staff meals. Cutting costs was the only thing and the best thing to do at that time without any business,” La Perna said.

March was not ideal and the restaurant had around 50 percent of its usual business.

In April, things started to turn around for many businesses, but still far from the time before COVID-19. The turning point was around April 25, the chef said, and since then business had been getting back to normal. 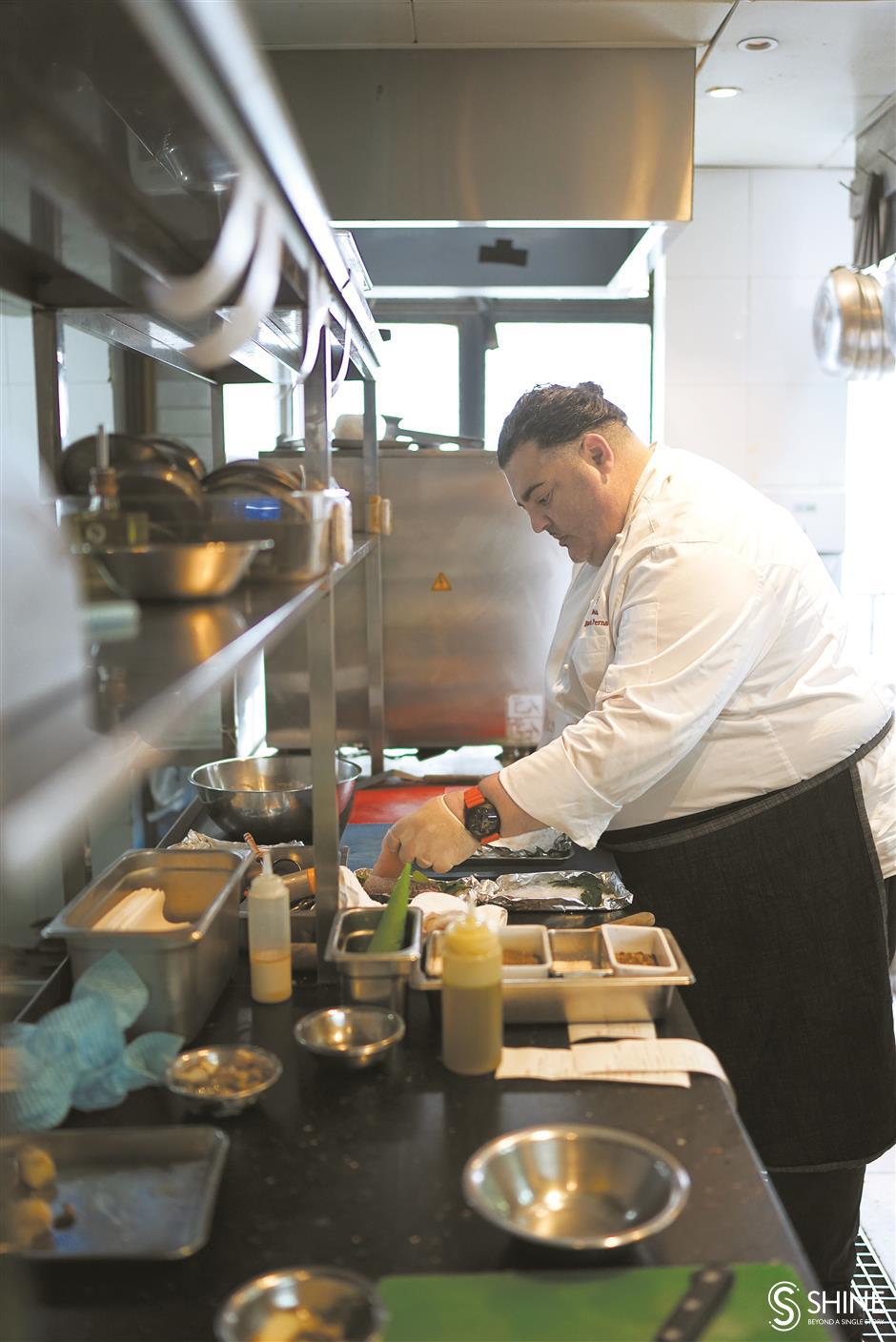 Fine dining restaurants are coping with the changes. La Perna decided to provide a lunch service in May. It was a great success from the first day, bringing new customers to the restaurant. The lunch set is cheaper (from 598 yuan per person) and faster compare to dinner, but with no compromises on quality.

“This year is better than last year, so far, because we opened for lunch, so now the dinner is the same as last year, and there’s the additional lunch,” La Perna said. “There’s more competition, but competition is good. What you offer is what you are, the COVID-19 situation has made a clear picture about that.”

Because of the additional lunch service on weekdays, the restaurant is now closed on Sundays. La Perna has also started to collaborate more with local suppliers, because for some time the restaurant wasn’t able to source some imported foods.

Miss Ali, a restaurant specializing in Xinjiang cuisine, relocated to a smaller space on Changle Road in July after its lease of Yuyuan Road E. venue ended.

The brand started as a small family-style bistro on Dagu Road, then moved to a bigger, loft-style space on Yuyuan Road E., opening and closing at other locations before returning to a more intimate bistro style.

Owner William Zhang said the rent of space in The Exchange Soho had doubled in recent years, and the decision to move to a smaller space was related to COVID-19. Now it’s closer to the group’s other restaurants Le Vin and Yakitori Torishou.

Zhang said his restaurants recovered in late March and most reopened in February. Miss Ali reopened in late February but The Exchange Soho had very strict regulations. They managed to run the business under these circumstances for about two months.

“Considering rent and labor costs, we decided to go back to the small bistro style, which is how we started.”

The small space cut rent costs by half, and Zhang changed the menu to feature fewer dishes and highlight Xinjiang-style hot skewers that are a perfect pairing with beer to promote the sale of drinks. Most of the staple dishes were removed. 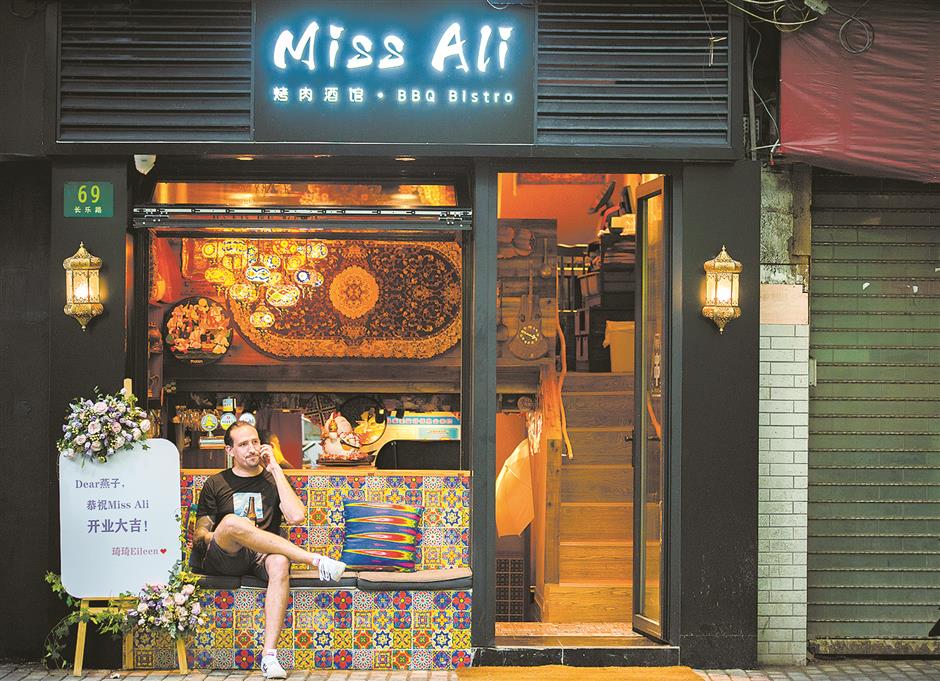 Xinjiang eatery Miss Ali has relocated to a smaller space on Changle Road in July.

The signature dish, dapanji, or “big-plate chicken,” is now cooked and served in a cast iron pot that keeps the dish warm. The dish now costs more because better-quality chicken is used.

Unlike 8 1/2 Otto e Mezzo BOMBANA, where lunch boosted business, Miss Ali went in a different direction. Now it only serves dinner and opens until midnight on weekdays and 2am on weekends.

The downsized space, reduced rent and fewer staff needed for one dinner service has turned the business around. It’s also doing better than in the same period last year.

One of the lessons Zhang learned over the years is that not every restaurant brand is suited to become a franchise with standard procedures like fast-food chains, and rapid expansion is just spending money from the future that you don’t have.

“For a small restaurant business, it’s about survival and making money. Opening 100 restaurants may not make you more money than having just 10, the industry is built on people,” he said.

During the early months of reopening, a Yakitori Torishou customer approached Zhang with the offer of a low-interest loan in the hope the restaurant could survive difficult times.

“We also took the time to evaluate the restaurants to save money in the best way we could, the tax deduction and other supporting policies also gave us a boost of confidence,” he said. 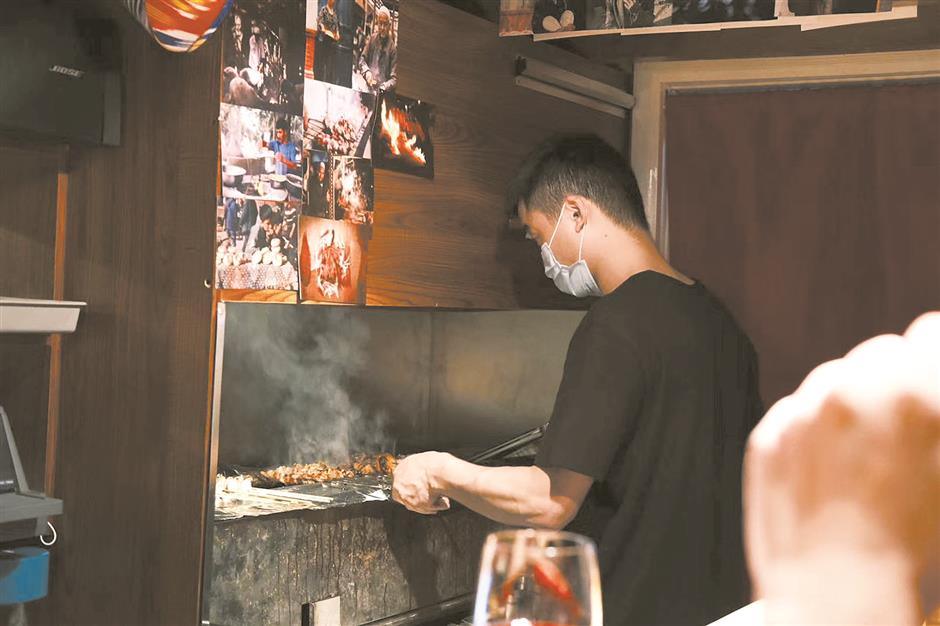 Miss Ali now only opens for dinner, but has extended the hours till midnight.

For Popot, a newer restaurant in town serving French cuisine in glass jars, things have been smooth. Morgan Lotterie is from France and has been living in Shanghai for four years, opening Popot with partners on Jianguo Road W. in October last year.

“The first three months were really good and encouraging, the business was better month after month. We expected the business to slow down a bit because the Chinese New Year and Western New Year were in the same month, so there were a lot of people moving around and going back to their countries,” Lotterie said. The restaurant only closed for four days in January and resumed takeouts and deliveries on January 29.

“But February was quite tough. We went through the month without closing a single day, which helped us a lot because we were one of only a few restaurants still open. People were coming but they weren’t allowed to dine-in, so we opened a window and sold them mini salads, soups, bottles of wine and more, so they would go back home to eat and drink,” he said.

For the staff, there was the uncertainty about pay cuts or losing their jobs.

“We had reduced working hours because of the shorter business hours, but staff salaries and benefits remained unchanged, so everyone stayed and that helped us with the fast recovery,” said Yu Jingjing, co-founder of Popot.

Its products, already packed and sealed in jars, were perfect for the time because of the high level of cleanliness and safety — people cannot touch the food in the sealed glass jars.

“The business started to get back on track in early March, even February was a disaster, we paid our rent, suppliers and staff,” said Lotterie. 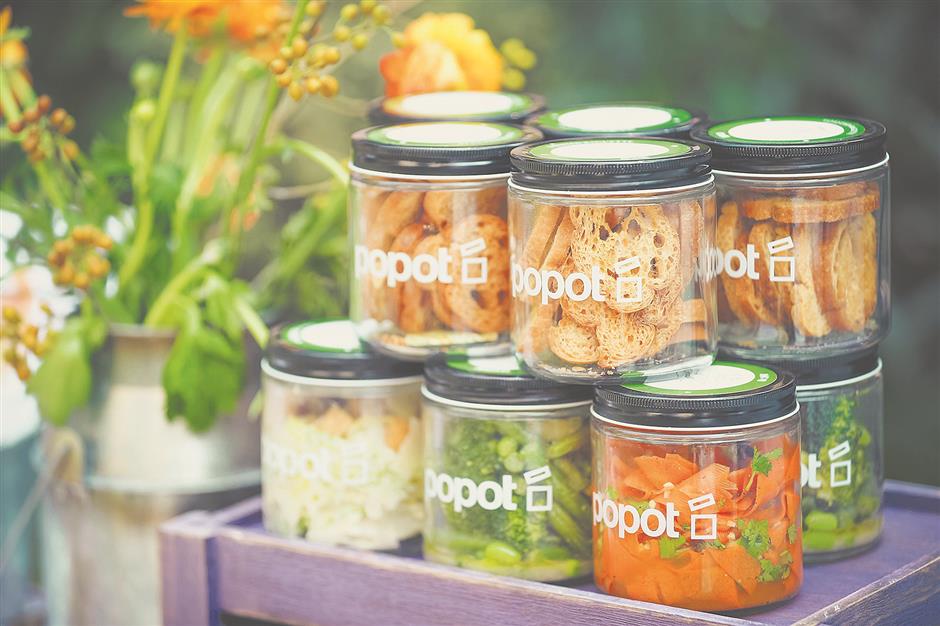 “Now it’s better than last year since May, but also because we are new, the last three months of 2019 were the starting point for us.”

Because of consistent business this summer, it is to open a branch in the Nanjing Road W area. “An obvious next step,” said Lotterie.

Delivery has been an immediate solution for restaurants to survive between February and April, whether small eateries and bistros or fine dining establishments.

“We are naturally made for delivery, so after the COVID-19 outbreak we became more aggressive on the delivery platforms. The delivery business is picking up really quickly to balance the loss of the dine-in business,” said Yu.

For Miss Ali, deliveries were not so profitable. Zhang rounded up the kitchen operations of different restaurants including Miss Ali to the Yakitori Torishou location.

“We weren’t making much money with deliveries, but we had to keep the kitchens running and give the staff something to do for their morale and confidence, even if it was just two or three days a week. To increase income and reduce expenditure, we needed to make every cent,” said Zhang.

“When the time comes and we are ready to reopen, the staff will not be out of practice, especially with the additional hygiene requirements,” said Zhang.

With the commission charged by delivery apps increasing every year, sometimes it’s difficult to make money.

“Yes, it’s profitable, but the commission is high, that’s why we try to diversify our online business by having our own WeChat shop that loyal customers can order from,” Yu said.

Lotterie said that despite high commission, if it didn’t use the apps, it wouldn’t have the exposure, and it would need to hire delivery staff that would cost more than the commission at the end of the month. In June and July, the restaurant’s revenue almost tripled on Ele.me.

“I’m happy to pay the commission, yes it’s high, but it’s definitely helping my business take off,” he said. 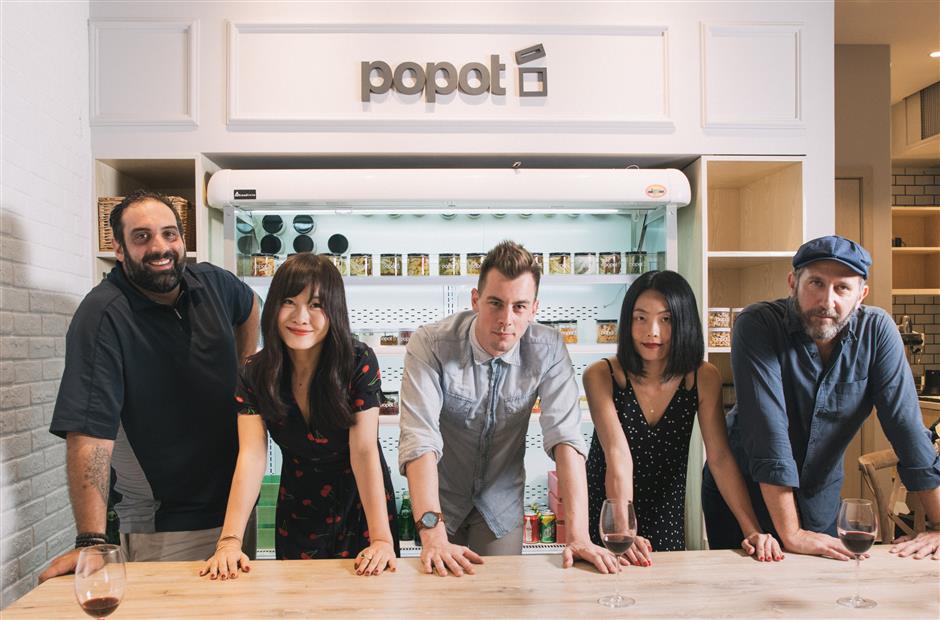 The Popot team is looking to open a second shop soon.