Though modern logistics can transport fragile matsutake mushroom to the other side of the country and keep them fresh as if they were just picked in the mountains, dried produce still holds an important position in Chinese cuisine.

In a Chinese supermarket, there are always a few aisles filled with dried products, ranging from cheap dried mushroom and fungus to expensive sea cucumber and fish maw with price tags in four digits.

Drying easily perishable ingredients, like mushrooms that can only stay fresh for a day and beancurd sheets that would go bad quickly, was a way to extend the shelf life of fresh produce and catches from days to months, sometimes even a year. The dried ingredients are sealed and stored at room temperature, making them easily accessible at any time.

And the drying process is not just for preservation, it’s also to reconstruct the food and change the flavor and texture. Sometimes dried products cost much more than fresh ones, such as abalone and fish swim bladder.

Cooking with dried products, however, is a science. The reconstitution process varies greatly when dealing with different ingredients — not all foods can be rehydrated by soaking them in water.

Dried produces, from the cheap mushrooms to costly abalone and sea cucumber, are essential in Chinese cuisine.

The most common way to reconstitute dried food products is to use water, and rehydration applies to the majority of plant-based ingredients.

One of the more common dried products in Chinese cuisine are shitake mushrooms, which are found in stir-fries, soups, congees and stews.

The important part of rehydrating mushrooms is cleaning them, because they’re dried outdoors before being packaged and sold. As the mushroom grows bigger in water, more dirt and sand will come out, so it’s necessary to change the water a few times.

Compared to fresh shitake mushrooms, rehydrated dried mushrooms boast a much stronger smell and taste, but is not as meaty as the fresh variety. Dried shitake mushrooms are particularly suitable for making soups and stews as the special, concentrated flavor can incorporate into other ingredients.

The last bowl of water used to rehydrate shitake mushrooms is not to be discarded. Almost free from dirt and sand, the water can work as a perfect vegetable stock to add flavor to other dishes. 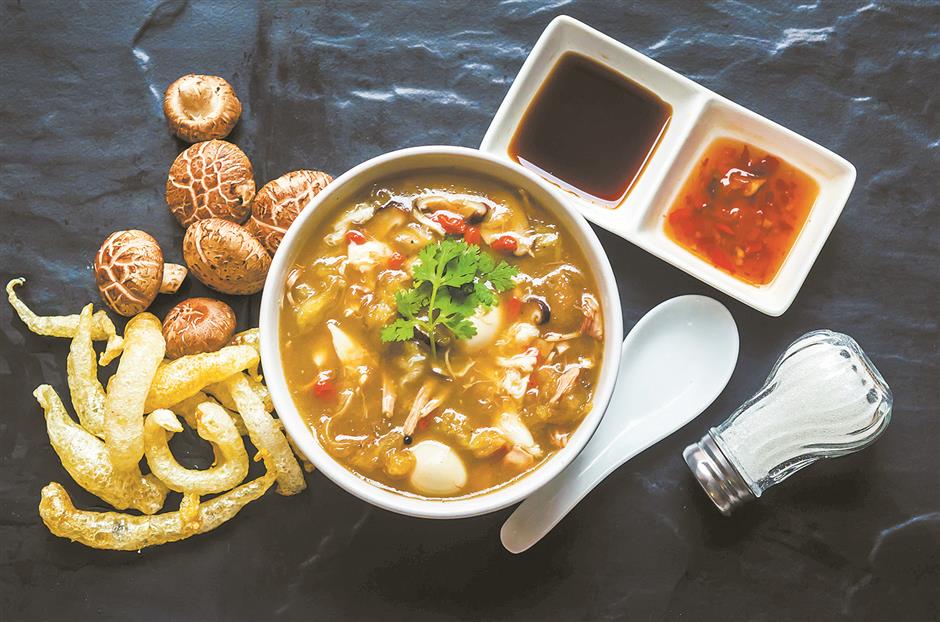 A bowl of fish maw and mushroom soup made with dried produce.

White fungus is commonly used to make sweet, soupy desserts with nutritional ingredients such as jujube and goji berries. Before logistics became well-developed to transport fresh white fungus, the dried white fungus is what people purchased on a daily basis. In this case, the fresh white fungus is much better in flavor and texture when comparing to the dried, which has a quite earthy taste. Another fungus that’s better fresh than dried is bamboo fungus, a spongy, hollow fungus with a refreshing taste and crisp texture. Bamboo fungus is usually stewed in soups or stuffed with shrimp paste and then boiled in hotpot.

In general, animal-based dried products are more complicated to reconstitute because rehydration in water wouldn’t restore the shape and can make them go bad quickly.

Sea cucumber is deemed as an upscale delicacy at fancy restaurants, and the high price is not only for the quality of the dry sea cucumber, but also the heavy labor that goes into the preparation. A dried sea cucumber is usually the size of a pinky finger, and when fully and successfully reconstituted, it could reach the length of the palm. 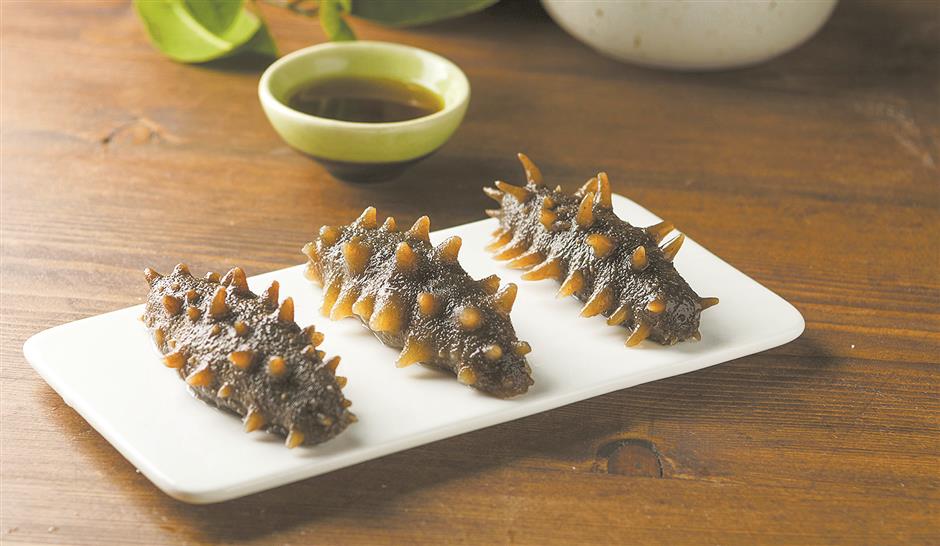 Dried sea cucumber can take days to reconstitute and every step must be followed meticulously. First of all, your hands must be completely clean and without any lotion, the container should avoid contact with oil, salt and vinegar.

One of the common methods of reconstituting sea cucumber at home is to soak the sea cucumbers in purified water in a container in the fridge for two days, changing the water daily. The size of the sea cucumber will grow a bit bigger and the surface is softer. Next, it’s essential to cut open the sea cucumber and remove the unwanted parts as well as cutting through the vein-like tendon into three to four parts, that way it wouldn’t stop the sea cucumber growing bigger.

The sea cucumber is then boiled in purified water for half an hour and then sat for another half hour after the heat is off. Next, the sea cucumber is immersed in water filled with ice cubes and placed in the fridge at around 5 degrees Celsius for two days, with the water changed daily.

Sea cucumber has a delightful bouncy texture and a very subtle taste of seafood. It’s usually cooked in rich sauces or soups to infuse the flavors. Sea cucumber and leek stir-fry is an all-time classic dish in Shandong Province, a major sea cucumber production region in China, and an unusual congee of millet and sea cucumber is also popular there.

With fish maw, which is the swim bladder that comes from fish such as croaker and considered a collagen-boosting ingredient, an ideal way of reconstitution is with oil instead of water. The theory is to soak the fish maw in warm oil (not boiling hot) until it softens and then fry over a low heat while pressing it down to be fully immersed in oil until bubbles start to appear. The process is quite complicated because the temperature should be monitored constantly. If it gets too hot, remove the pot from the heat to cool it down.

A fully fried fish maw should have a sponge-like texture on the cross section. It’s then soaked in hot water to soften, then removed from water and the moisture squeezed out.

To find a dish that represents the craftsmanship and flavor of dried ingredients, it’s the Buddha jumps over the wall, the extravagant soup that’s also known as Buddha’s temptation. It involves a long list of fancy ingredients including sea cucumber, fish maw and abalone, all properly reconstituted from high-end dried products and simmered for hours while changing the temperature according to the features of the different ingredients. 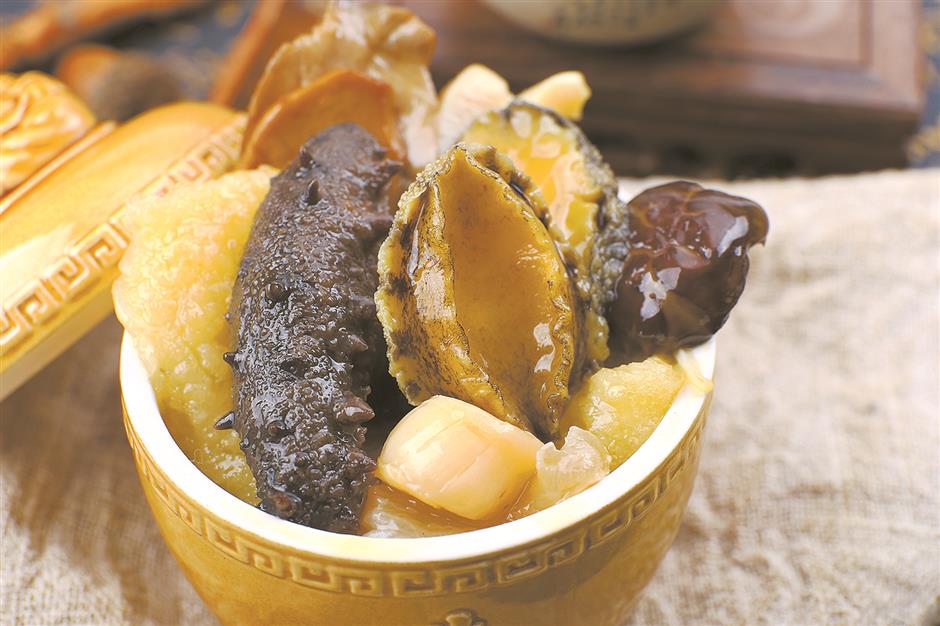 A luscious soup named Buddha jumps over the wall can best represent the craftsmanship and flavor of dried ingredients.