Add some weight with pork belly 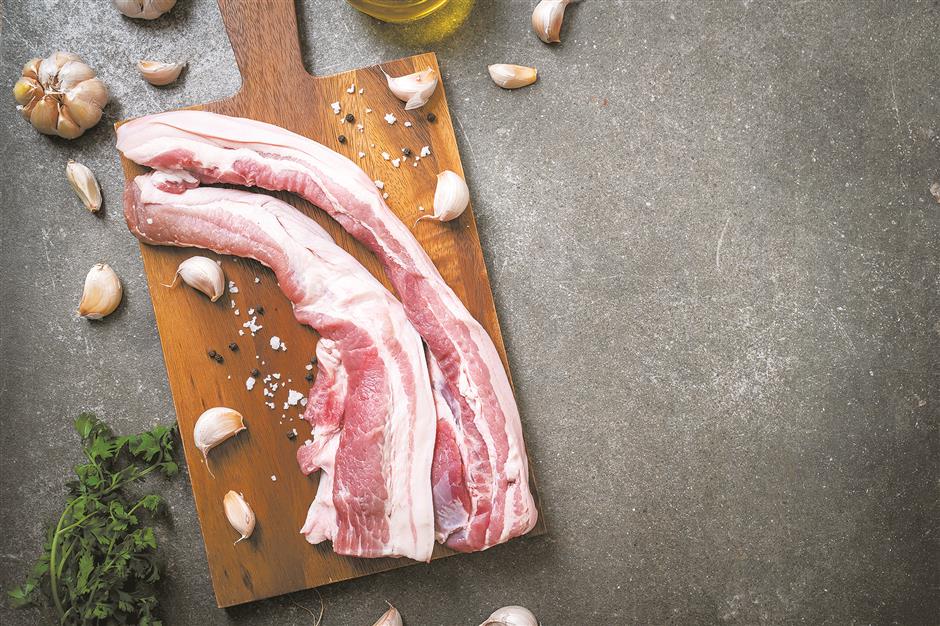 In Chinese culinary culture, the end of summer heat means it’s time to put on some autumn weight by filling meals with rich, sumptuous delicacies, and what can be better than pork belly meat.

Pork belly is a fatty cut of meat from the underside of the pig’s loin. In Chinese, it’s called wuhuarou, which refers to the marbling layers of fatty and lean meat. In Western cuisine, this cut of pork, usually sold very cheaply, is salted and cured to make bacon or pancetta. But in China, pork belly meat is mostly cooked fresh and the cut is much pricier than other parts of the pork such as the ham and shoulder. The skin is part of the layers preserved for cooking belly meat for that collagen-rich texture.

Pork belly meat performs exceptionally well in rich stews and braised dishes, besides the melting pork fat boasting remarkable flavors, the lean part of pork belly meat is also extra tender and juicy, and the combination of the two elevates the textural experience to a whole new level.

Hongshaorou, or braised pork belly, is an iconic Shanghainese dish that’s both a household favorite and a must-try for travelers. The perfect cut of pork belly meat used to make hongshaorou should have three layers of fatty meat and three layers of lean.

The glossy red color of hongshaorou is from a special caramelized sugar syrup, which is boiling rock sugar with some water until they dissolve and become brown in color, then toss the pork belly meat in the sugar before braising with other sauces and condiments.

Hard-boiled egg (chicken or quail eggs), shitake mushrooms, beancurd sheet knots and potatoes can also be braised with the pork belly meat to soak up the delicious brown sauce.

There are many variations of braised pork belly dishes with different names across China, the recipes vary in terms of the shape of the meat, the sauce, seasoning and preparation steps. 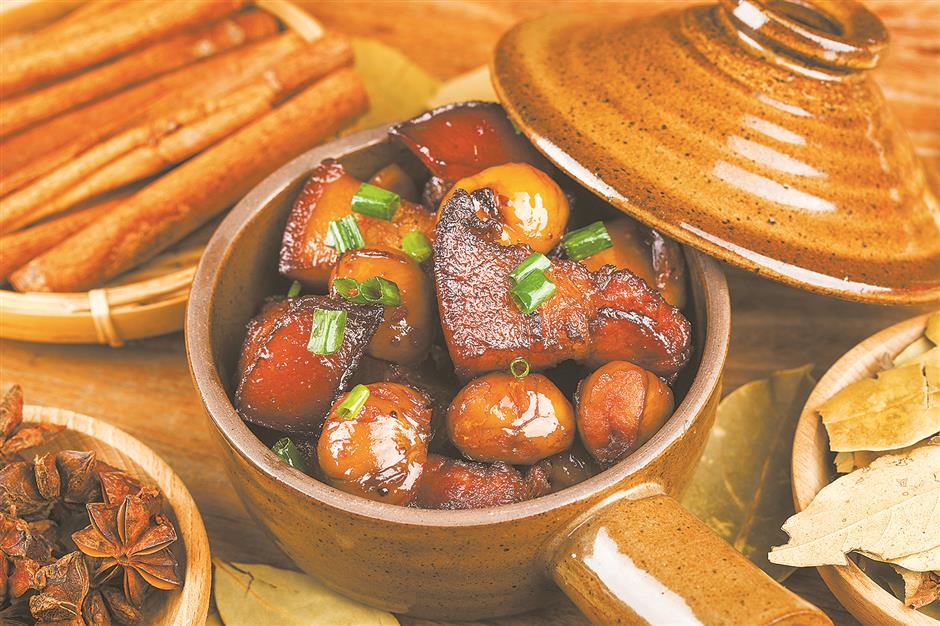 Hongshaorou, the braised pork belly dish, is a Shanghai classic.

Dongpo pork is the traditional braised pork belly dish in Hangzhou cuisine. It’s believed that the dish was created by Su Dongpo, the Song Dynasty (960-1279) poet who was a well-known pork lover. Back then, pork was a cheap meat compared with lamb. Dongpo pork can take two forms, one is small cubes and the other is a large one-piece of meat tied with hemp rope and served individually.

Dongpo pork is known for its glossy red color, melting yet non-greasy fatty meat and soft lean meat. The overall flavor of the dish is sweet with the strong aroma of rice wine.

The pork belly meat is seared in some oil first to render out the fat, then braised with light and dark soy sauce, rice wine and sugar syrup like the one used for hongshaorou. The meat is braised in a clay pot until the sauce thickens and the pork belly becomes extra soft. Some people would also steam the pork belly meat after braising.

In Jinan, Shandong Province, a local signature dish is called bazirou, which stews large pieces of fresh pork belly meat, already boiled in water to remove the residual blood, in soy sauce with rock sugar and spices (cinnamon bark and star anise) for a long time until the extra fat is rendered out and the lean part becomes very soft. A traditional recipe would tie the large pieces of meat with grass rope to maintain their shape so they don’t break apart after two hours of simmering.

There’s no need to add salt to this dish because the blend of light and dark soy sauce is sufficient, and it’s the fatty part of the meat that provides the best flavor. Bazirou can be marinated in the sauce overnight to intensify the flavor and then heated and served hot. A ladle of that rich sauce poured over the rice is the magic touch.

Pork belly meat is not just the star of main entries, a classic Sichuan-style dish called suanni bairou, white meat in garlic paste sauce, is served chilled as a starter and is a definite crowd pleaser. 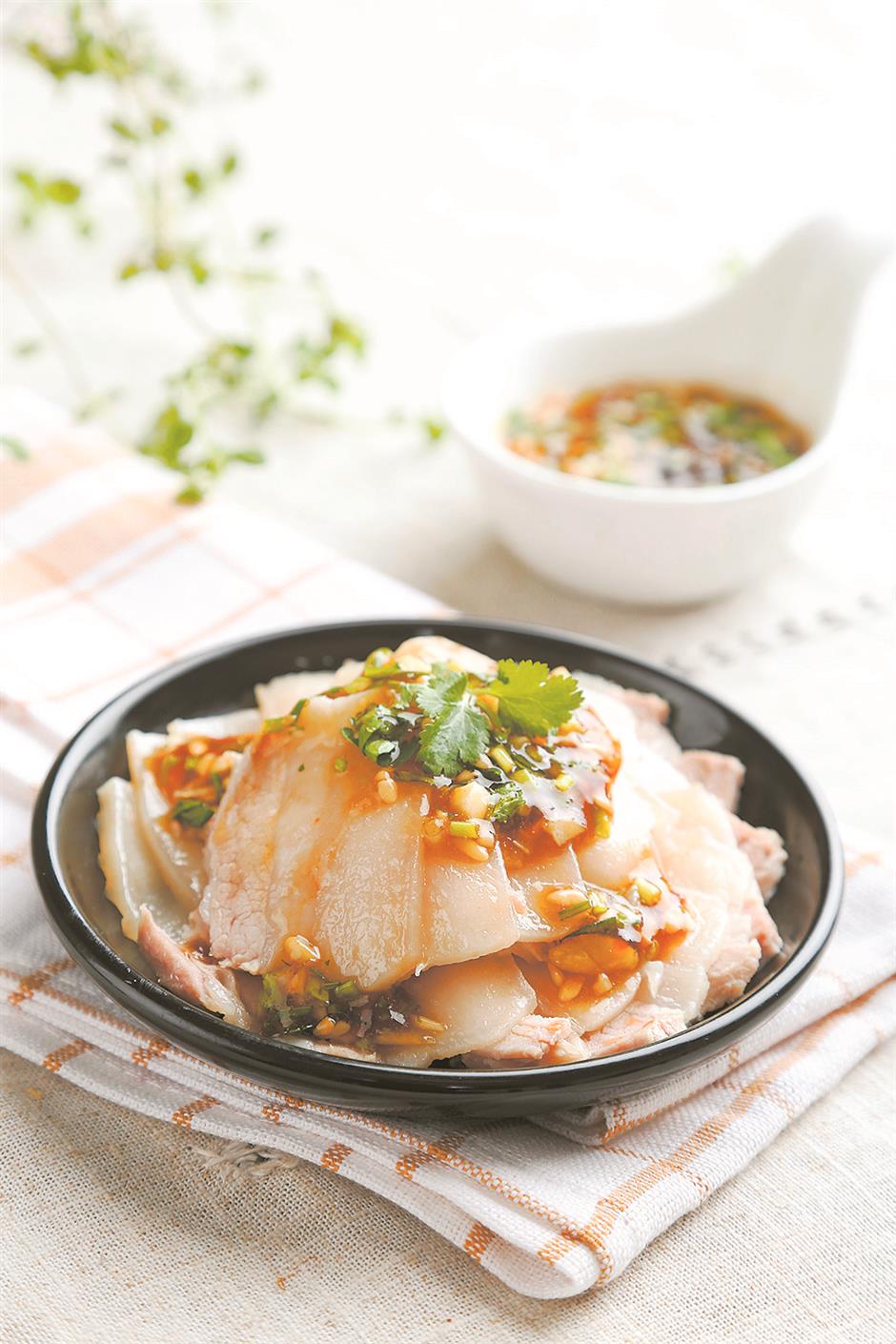 A fresh, high-quality cut of pork belly meat is placed in a pot of cold water and boiled with ginger slices and some wine to remove the meaty smell and taste. The meat should be fully cooked at this stage and then rinsed in cold water and set aside to cool thoroughly. The next step is a test of knife skills. The pork belly meat should be sliced as thinly as possible in long pieces, then arranged on a plate either flat or rolled with shredded cucumber. The chilled pork belly meat has a blended texture of chewy skin, soft fatty meat and al-dente lean meat.

The key to the dish if the garlic sauce made of minced fresh garlic, ginger, scallion, light soy sauce, vinegar, sugar, sesame oil, Sichuan peppercorn powder and chili oil. It’s simply topped on the thinly sliced pork belly meat as a dressing. Raw garlic is a popular companion to rich meat dishes in Chinese cuisine. As the folk saying goes, eating meat without garlic will lose half the flavor.

The rich pork belly with skin on is also the ingredient to make the succulent filling of stewed pork known as lazhirou for Shaanxi-style roujiamo, the meat-between-bun Chinese burger from the northwestern province. The fatty part of the meat provides the irresistible juice and the lean part that’s soft enough to break apart is very rich in flavor.

As pork belly is a very soft cut of meat, it’s also sliced and steamed to make two traditional Chinese dishes, meicaikourou which is steamed pork belly with preserved vegetables, and yutoukourou, steamed pork belly with taro. Both dishes use the verb kou to describe the flipping action of transferring the dish from the bowl to the plate, and they are often served on occasions such as family reunions and grand feasts.

The preparation of the two steamed pork belly dishes is similar, the difference is the vegetable used to pair with the meat. A large, fresh cut of pork belly meat is first boiled in water with ginger until it’s fully cooked, then a toothpick is used to poke small holes in the skin so that the dark soy sauce can infuse into the meat better. The brown-colored meat is then deep-fried in oil, skin side down, for five minutes until the skin becomes crispy. After the meat is rested and cooled down, it’s cut into even, thick slices and then soaked in a marinade of dark and light soy sauce, rice wine, sesame oil and sugar. 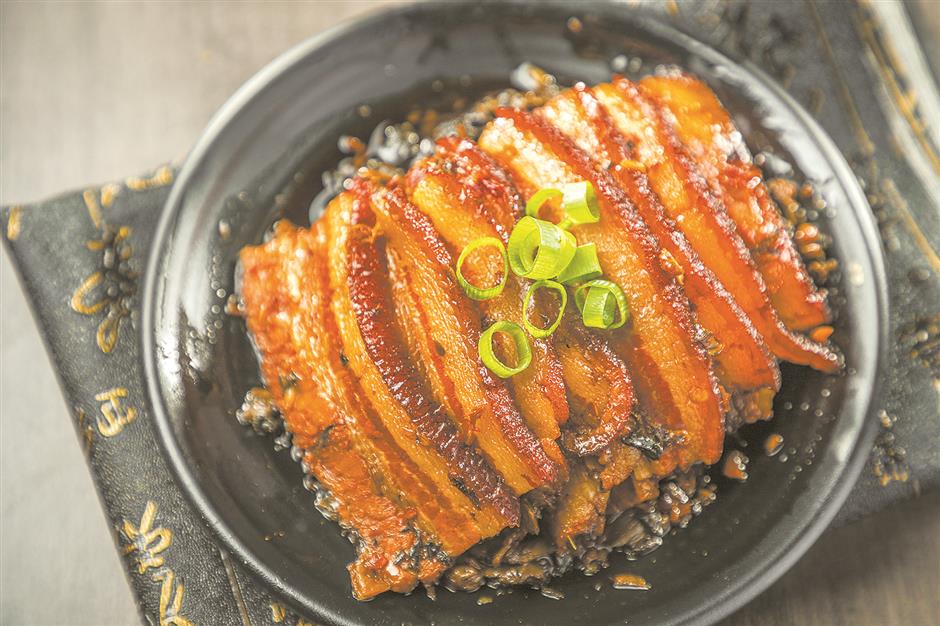 The pieces of pork belly meat are then arranged to cover the bottom and sides of a bowl and stir-fried preserved vegetable is filled in the middle. With taro, the technique is to arrange a piece of meat and a piece of Lipu taro of similar size alternatively until the bowl is completely filled

After pouring the brown sauce into the bowl, the dish is then steamed for an hour. Then, cover the bowl with a plate and flip quickly so that the food is transferred to the serving dish. An ideal kourou dish should maintain a hemispherical shape, and it’s best to serve with rice or steamed buns.

Pork belly is a premium cut for barbecue and grill. After the fat is sizzled and the edges crisped up, the extra thin slices just need a minimum seasoning of salt and pepper.

Pork belly meat is also cured in winter to preserve for a long time. It’s a Chinese New Year signature dish and the flavor of the meat changes drastically over time. When cured pork belly meat is steamed or stir-fried, the fatty part will become transparent. 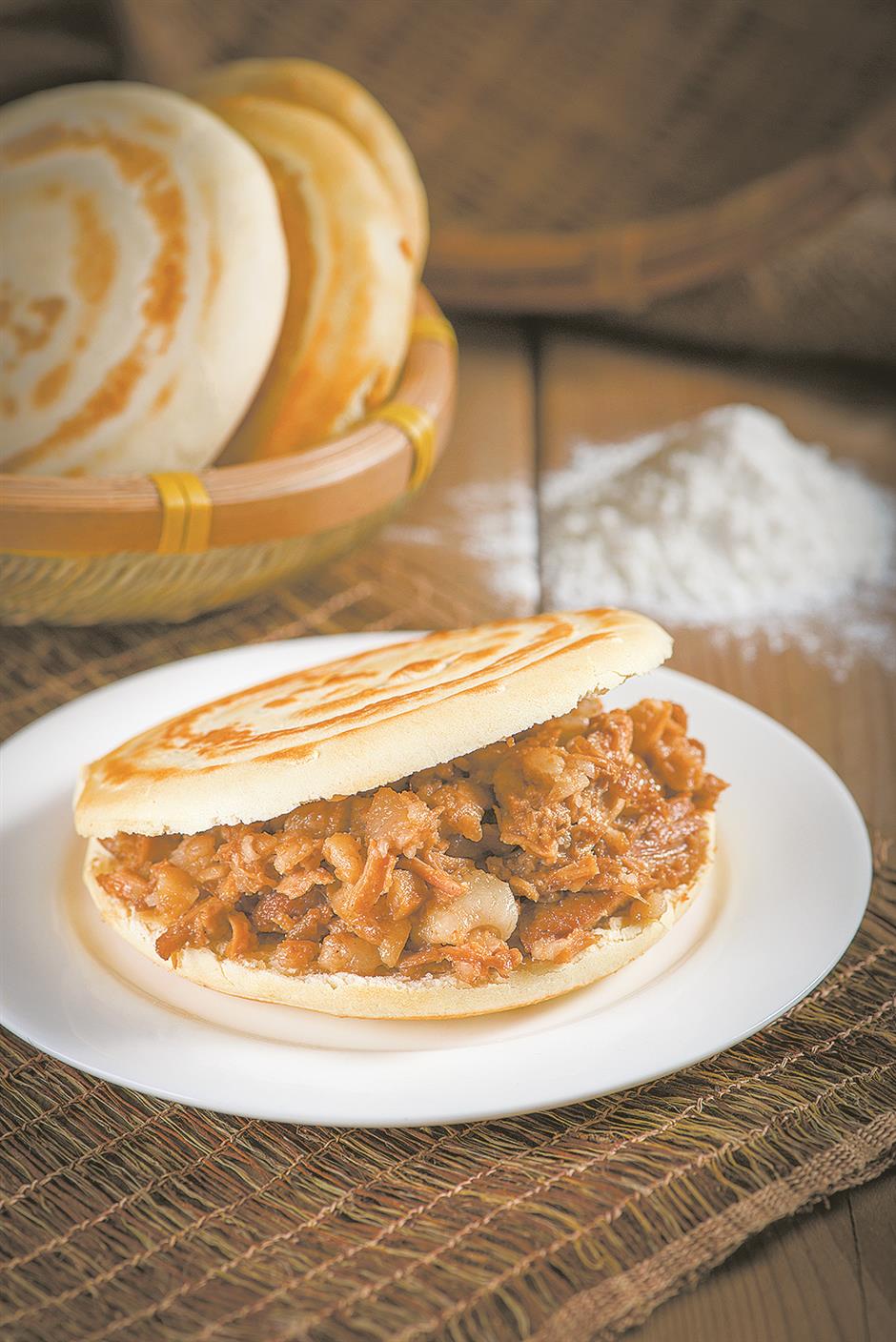