Dumplings in all shapes and sizes

Dumplings are among the most convenient of Chinese fast foods, they are a large family of delicacies that vary greatly in flavor, shape and technique across the country.

The English word dumpling is used for a very large category of dishes, not just the traditional jiaozi but also wonton, small buns and rice balls. It’s the concept of stuffing savory or sweet filling in a flour wrapper, which can be made with wheat flour, rice flour or glutinous rice flour.

Dumplings are a full-nutrition food with a great proportion of carbohydrates, fiber (from the vegetables) as well as protein and fat from the meat or egg. Dumplings can be cooked in minutes and are a perfect meal when you are in a rush.

There are two main ways to cook dumplings. One is to boil in hot water until the filling is fully cooked and the dumplings float to the surface, the other is to pan-fry the dumplings for a much richer flavor and crispy-meets-soft contrast with the wrapper and filling. 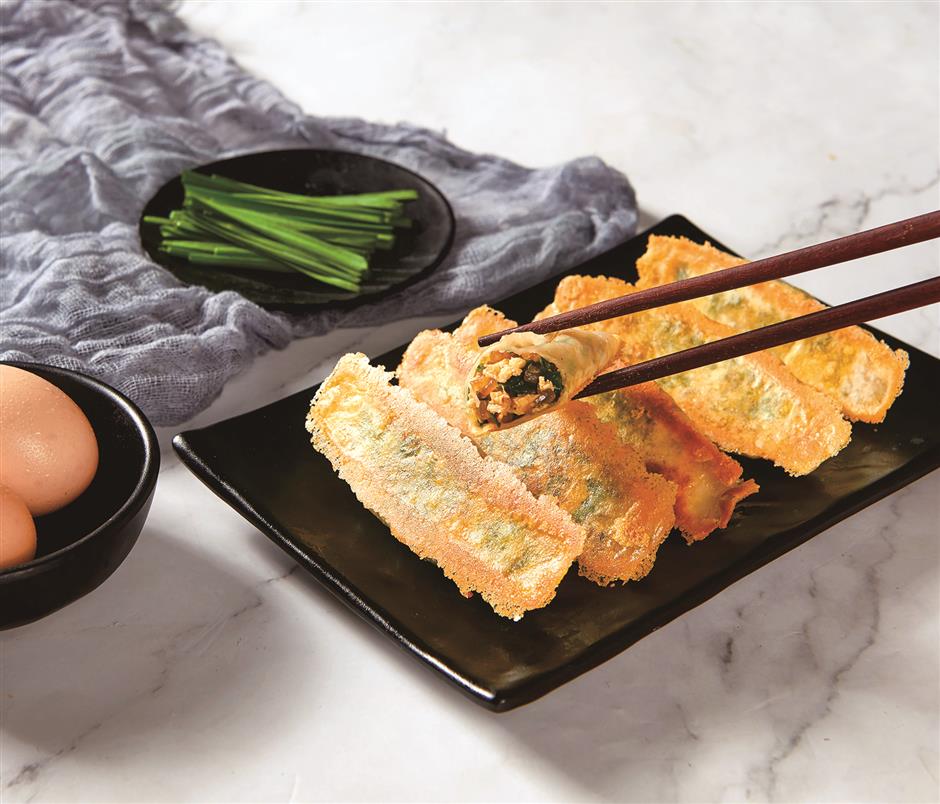 Pan-fried dumplings are said to have emerged in the Song Dynasty (960-1279) as a folk snack. The dumplings used for pan-frying are usually the classic triangle-shaped jiaozi with a broader bottom and sealed top, and there can be variations as well.

The basic technique to make guotie, meaning stick to the pan (or potsticker in English), is to pan-fry the bottom of the dumplings until they are crispy and golden. Then splash water to cover at least half the height of the dumplings and cover with a lid. The steam created by the heat will cook the upper part of the dumplings, while the bottom remains crunchy after the water evaporates.

The key in making guotie at home is to remove the pan from heat immediately after the moisture is gone. The dumplings can quickly become badly burned because of the high heat.

The dumplings used for boiling must be tightly sealed to prevent the fillings from falling out, but pan-fried dumplings sit in the pan without moving at all, so there are some dumplings that are open at both ends. It’s not only an easier and quicker way to make dumplings, but also allows better air and heat circulation in the pan so that the dumplings are cooked quickly. 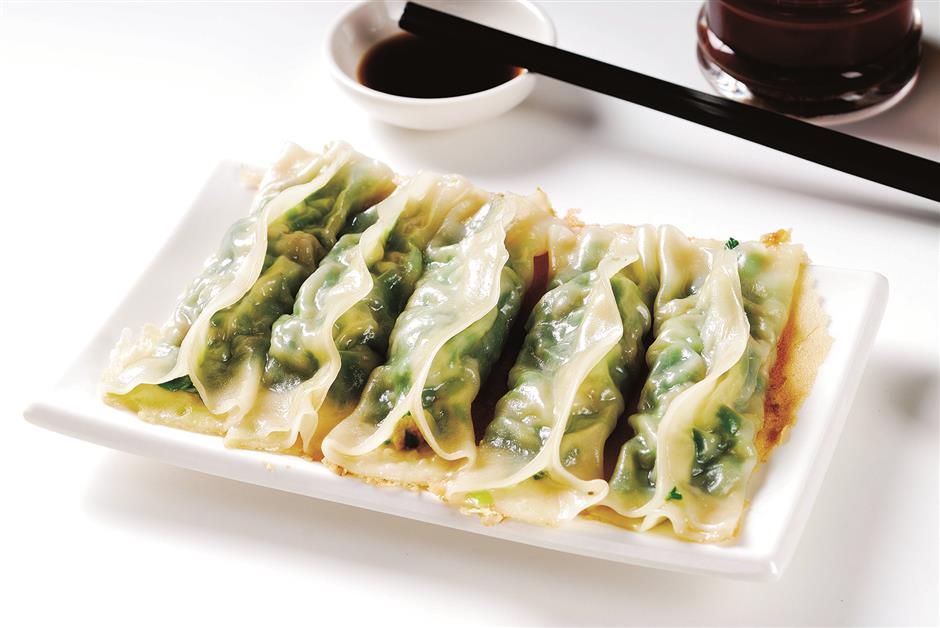 Guotie dumplings that have open ends.

Frozen dumplings are actually very suited for making pan-fried dumplings. The skin is usually thinner than those made from scratch with flour, and the dumplings can be pan-fried directly without thawing to make a quick meal.

Nanjing-style pan-fried dumplings are an iconic dish of the local cuisine. With a minced beef filling that has a hint of sweetness, the dumplings are long and narrow, and have extra golden-yellow-colored skin.

The filling for pan-fried dumpling can be vegetarian like regular jiaozi. Chinese chive and egg is the most popular non-meat variety that’s especially umami.

There are two fancier versions of pan-fried dumplings often served as a crowd-pleaser staple. One is to use starch water made with corn starch instead of plain water to steam the dumplings, and when the water content is gone, a beautiful layer of “frosty” crisp would form underneath the dumplings. A nonstick pan is essential when making this dish at home. The dumplings are served upside down by covering the pan with a large plate and flipping the dumplings out to reveal the crispy layer.

The holes on the layer of crispy frost will be bigger when the starch mixture is more watery. An ideal starch to water ratio is one to 10-12. It shouldn’t be more diluted than that. 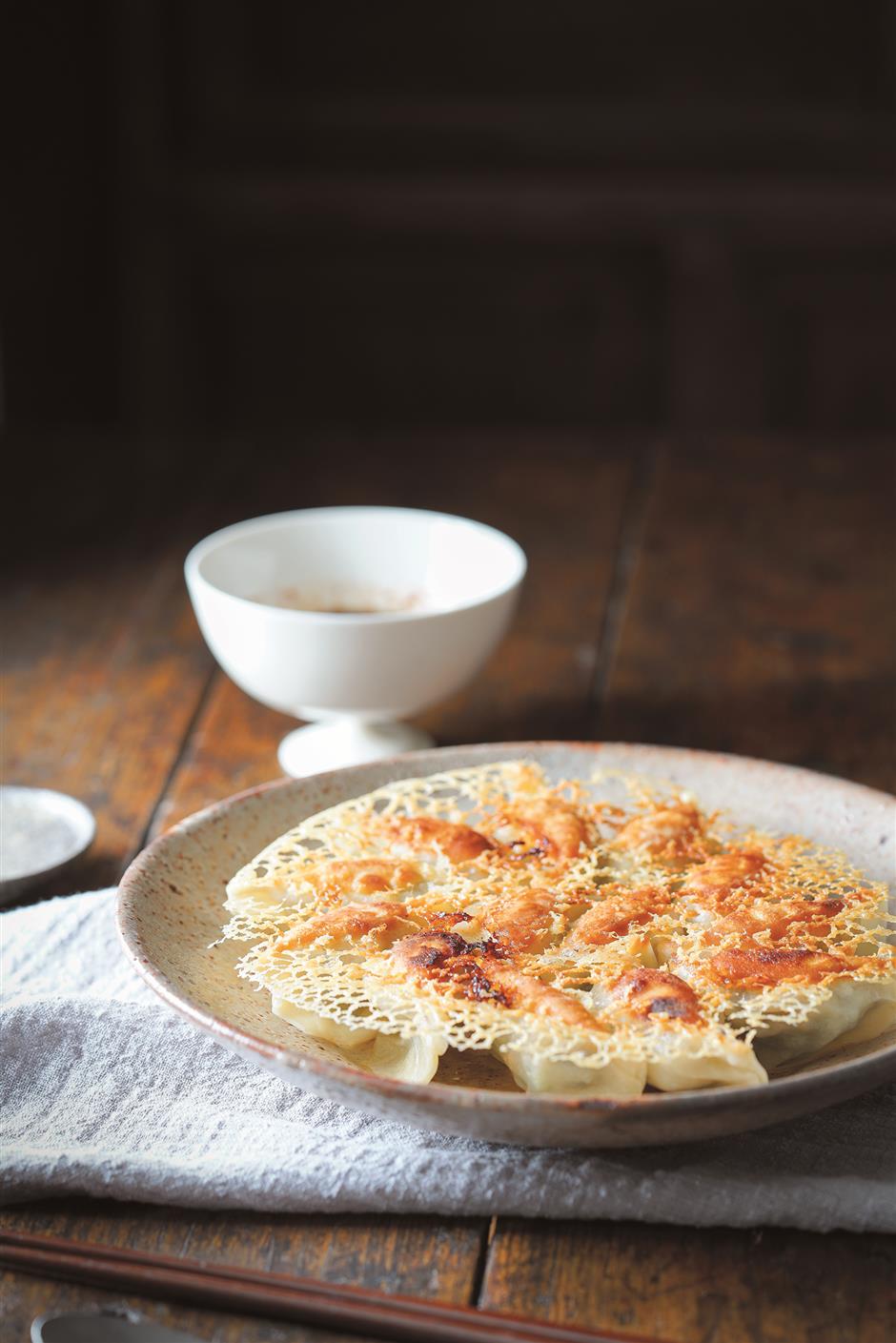 Guotie with a beautiful layer of “frosty” crisp.

Pan-fried egg dumplings are a more complicated recipe. First pan-fry the bottom of the dumplings, then add some water to steam them before adding two beaten eggs to cover the bottom of the pan. The egg is already seasoned with salt and pepper, and will connect all the dumplings when it coagulates. A generous sprinkle of chopped scallion and toasted black sesame seeds is essential.

Pan-fried dumplings are often served with a vinegar and light soy sauce dressing, seasoned with a little sugar and optional minced garlic.

A Shanghainese snack to the core, shengjian are pan-fried dumplings that are a must-eat for tourists and a quintessential part of local culture.

Many people consider the best part of shengjian is not the meat filling, but the thick, crunchy bottom of the skin that has soaked up the delicious juice from the filling.

The size of shengjian, sometimes called shengjian mantou,is between a typical potsticker and baozi (bun). The skin of shengjian can be made with leavened, unleavened or semi-leavened dough, which brings different textures to cater to different needs. The leavened wrapper is soft yet thick, while the unleavened is thinner.

The major debate about shengjian is whether the dim sum should have soup in the filling. Traditionally the soup is made of stewed pork skin and the liquid would cool down to a jelly and could be cut into small cubes and mixed in the filling. When the dumplings are fried in the pan and encounter high heat, the jelly would then melt into a perfect spoonful of rich soup. 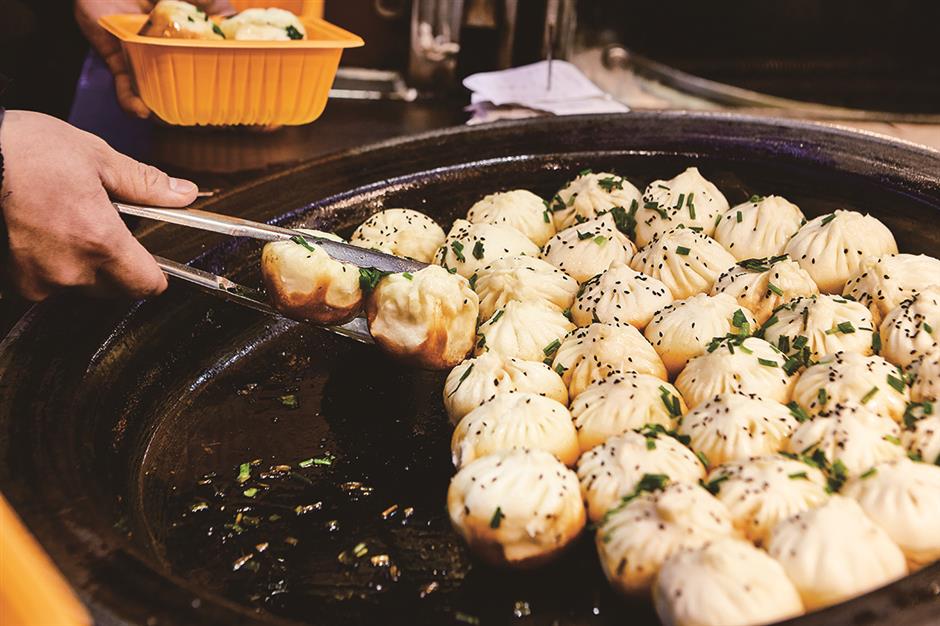 Some people prefer the old-fashioned shengjian with a drier, soupless filling. The franchise specializing in this type of dumpling is Da Hu Chun, which uses fully leavened dough with a dense, slightly sweet filling, and no soup at all.

Water is added into giant pans to steam the lightly fried dumplings, no flour water or egg wash is used.

Finely chopped scallion and toasted sesame seeds are the essential topping of shengjian added right before it’s scooped out of the pan. The measuring unit for shengjian is not by number or serving, but liang, which equals to 50 grams in theory, but every liang of shengjian includes about four dumplings, the weight of which is definitely more than 50 grams. The historic explanation is that the unit liang measures the dumpling wrapper’s weight instead of the final product.

Classic shengjian filling is usually pure pork meat with both fatty and lean cuts combined to present the ideal, balanced texture and flavor. Now there are also different fillings that add shrimp, vegetables (usually shepherd’s purse) and even crayfish.

The perfect companion to shengjian is a bowl of savory soup, like curry beef soup with thinly sliced lean beef and lots of cilantro, or umami beancurd sheet dumplings with meat filling served with soft cellophane noodles.

The large Shanghai-style huntun (wonton) with vegetable and meat filling can also be pan-fried, the wonton skin is thinner and you can see through the greens in the filling.

In Henan Province, smaller buns are also pan-fried and served as breakfast, known as shuijianbao. The buns are slightly larger than shengjian with thicker and fluffier skins, and the fillings can be pork, lamb, beef or vegetarian (Chinese chives and fentiao, the dried noodles made from potato and sweet potato).

The pan-fried buns are served with hulatang, a traditional spicy, peppery soup made with lots of white pepper, shreds of black fungus, kelp and tofu, meat, vermicelli, wheat gluten and more, and topped with crunchy toasted peanuts, pickle and cilantro. 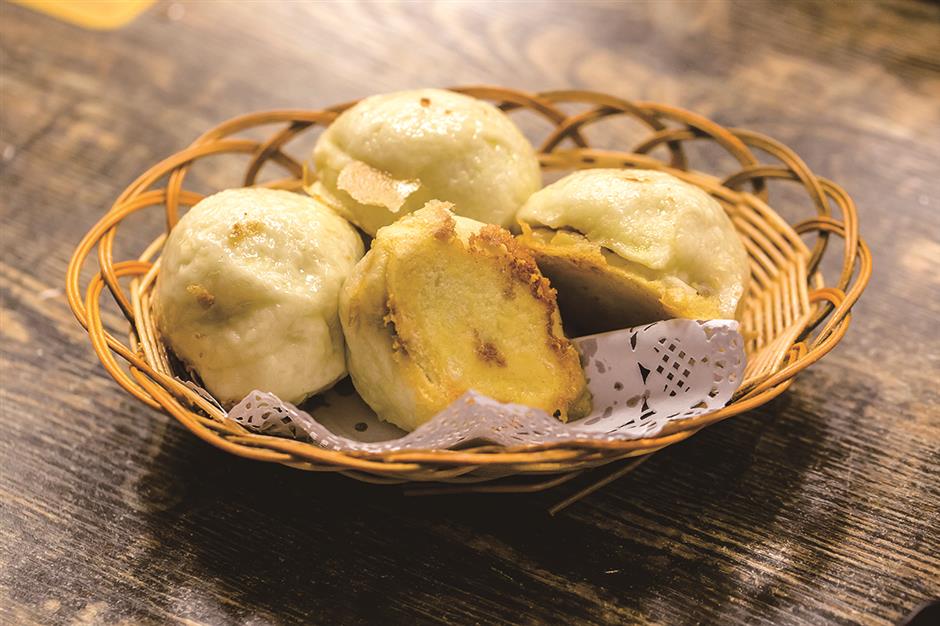