But does it go well with rice?

Xiafan, the Chinese expression that translates as “go well with rice,” is a unique standard people often use to rate the deliciousness of savory dishes — the dish that makes a person eat more rice is a winner.

A hot bowl of rice is the basic staple choice especially in the southern provinces where rice is planted. With its light aroma, a hint of natural sweetness and ideal texture that’s not too hard or too soft, rice has the power to absorb sauces and flavors instantly while balancing out saltiness and richness.

The concept of xiafan also applies to other foods like noodles, steamed buns and baked flatbread, as delicious dishes always encourage people to eat more staples. Hence, there’s a category of dishes called xiafancai, dishes that go well with rice, and within its range, there’s xiafanjiang, which is sauce-based dishes that are designated to pair with staples.

One of the most iconic xiafanjiang dishes is Beijing-style zhajiangmian, noodles served with a stir-fried dark sauce with a base of soy bean paste. It’s often ranked among the top 10 most famous noodle dishes in China, and as an everyday staple in Beijing, the recipe varies in different households.

The basic composition of zhajiangmian consists of thick, al-dente noodles, a salty dark sauce and thin shreds of fresh cucumber, carrot and cooked bean sprouts. The vegetables used as toppings may change according to seasons.

The key to the dish is the dark sauce, which is essentially a stir-fry made of soy bean paste sauce, sweet fermented flour sauce (tianmianjiang) and minced pork with the optional of tiny bites of shitake mushroom and dried tofu. The proportion of the two sauces varies depending on taste. Some people prefer to have more soybean paste while some love to split it evenly. The soybean paste is a very salty condiment while the fermented flour sauce is milder and sweeter. The latter is the sauce served with the Beijing roast duck to balance out the richness of the duck skin and meat while adding more flavor. 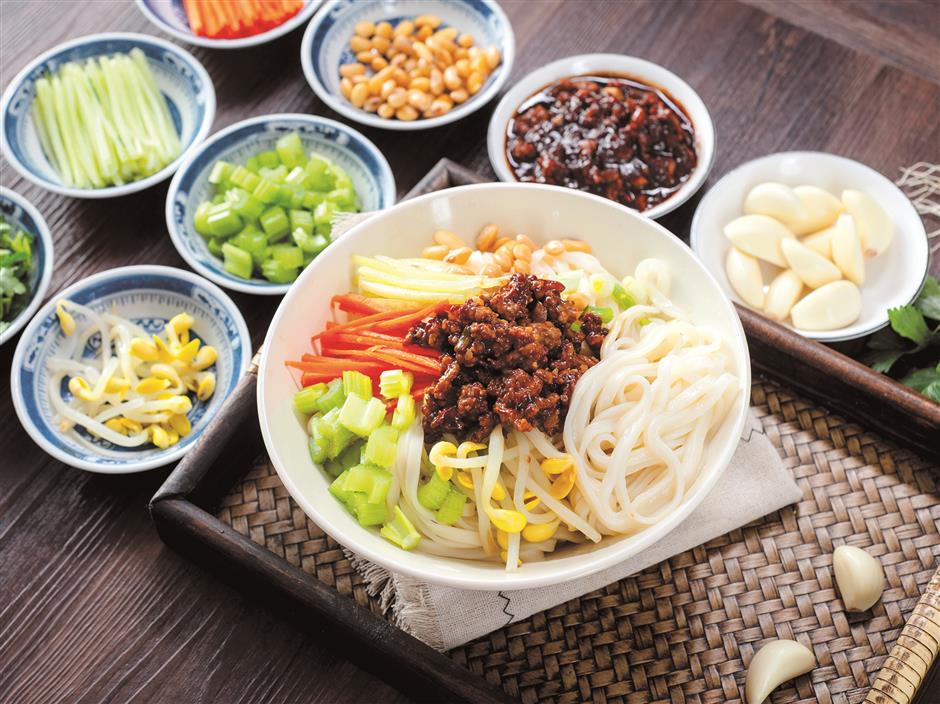 The basic process of making zhajiang, the fried sauce, is stir-frying the minced pork (preferably with more fattier meat) until the fat is rendered out, then adding minced garlic and ginger to neutralize the meaty taste before adding cooking wine, spice of choice (like star anise) and the sauces.

The ideal texture of the fried sauce should be thick but not dry with a glossy finish. It’s then simply poured over freshly cooked noodles with vegetable toppings to complete the dish. The best noodles for zhajiangmian are the thicker handmade noodles that are chewy and can be coated by the sauces very well.

In Shanghainese cuisine, a similar signature dish is babaolajiang, or eight-treasure spicy sauce. It’s not as sauce-like as the kind in zhajiang and more of a stir-fried dish with cubed ingredients cooked together.

Though it’s named eight-treasure, this dish can feature a dozen ingredients including both meat and vegetables. Traditional recipes usually use pork, chicken, shrimp, chicken or duck gizzard, pork tripe, green peas, shitake mushroom, bamboo shoots, dried tofu and fried (or toasted) peanuts. The larger ingredients are chopped into small cubes for even cooking and texture.

The stir-fried sauce uses the same combination of sweet fermented flour sauce and soy bean paste, but in moderate amounts.

The time-consuming part of making babaolajiang is preparing all the ingredients accordingly, like blanching the peas and shrimp in water, boiling the other meat and vegetables before lightly frying them in hot oil until about 80 percent cooked.

The meat, bamboo shoots, mushroom and tofu are stir-fried with garlic, ginger and scallions with the sauces, sugar and a drizzle of red chili oil. Peanuts are added last while the peas and shrimps are for garnish.

Babaolajiang has a sweet, salty and spicy flavor profile, and the evenly cubed ingredients are perfect as a topping for noodles, or a standalone dish that can also pair with rice. 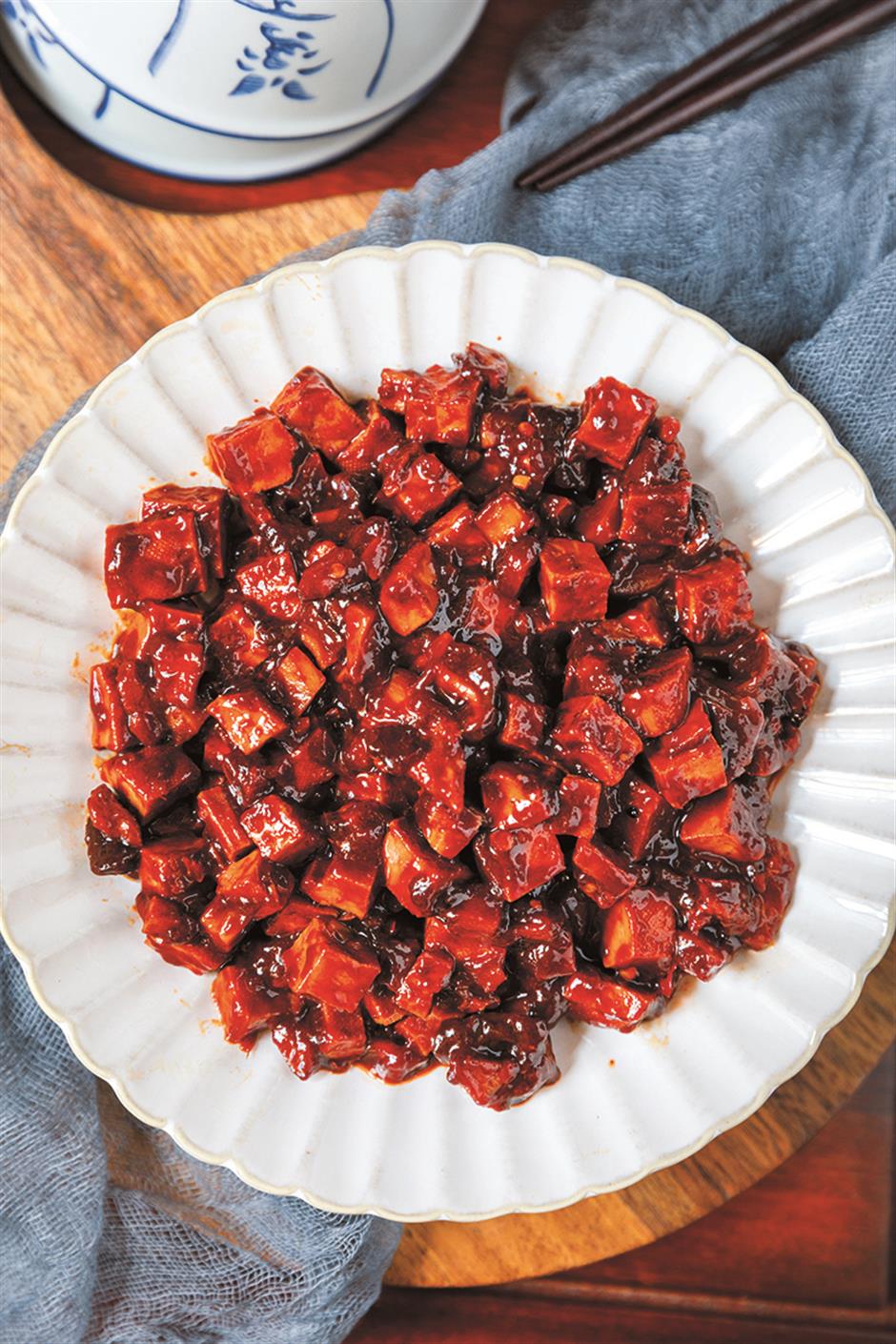 Egg sauce, which is a recipe popular in northeast China, is a much easier stir-fried sauce that can be ready in minutes. It’s very salty, flavorful and a great alternative to the meat-based xiafanjiang dishes. The idea is stir-frying the scrambled eggs with intense flavored sauces like soy bean, soy or oyster sauce to make it almost like a gravy. Chopped green chilies can be added to boost the spiciness.

Egg sauce is usually served with rice, noodles or hot steamed buns. The staples can absorb the sauce very well, which can also be used in various wraps and sandwiched flatbreads.

The popular and versatile mushroom sauce, on the other hand, is a bit oilier than the ones above as more fat is needed to make extra flavorful mushroom sauce.

Mushroom sauce is usually made with the most easily accessible mushrooms, shitake and abalone varieties are perfect for this sauce as they are very meaty and can be cut into small cubes easily. Meat is optional in this case.

The key to stir-frying mushroom sauce is to blanch the mushrooms briefly and squeeze out the moisture so they won’t become watery when stir-fried. The soy bean sauce is added after sauteing the mushrooms in oil together with some water. The sauce is ready when the moisture evaporates and can be stored in the fridge for a couple of days to serve with congee, buns or noodles.

Yaozhu, or dried scallops, is a very umami ingredient used in a wide variety of recipes from soup to staples. The intense seafood flavor of dried scallops also makes great stir-fried sauces, and an all-purpose recipe is garlic chili sauce with dried scallops.

The cheaper small dried scallops are sufficient to make this xiafanjiang, it should be soaked in water for 30 minutes to regain moisture, then torn apart in shreds for later use. It takes about six tablespoons of minced garlic and six to eight extra spicy small chilies that are finely chopped.

Using the double amount of oil as common stir-fries, cook the garlic and chili until the fragrance comes out, then add the dried scallops and season with oyster sauce and soy sauce. Toss a handful of toasted white sesame seeds in at the end to boost the richness of the sauce. The garlic chili sauce with dried scallops is a great companion to rice, buns and vegetables.

It’s very spicy, yet not as bold and rich as the sauces made of fermented flour sauce or soy bean paste. 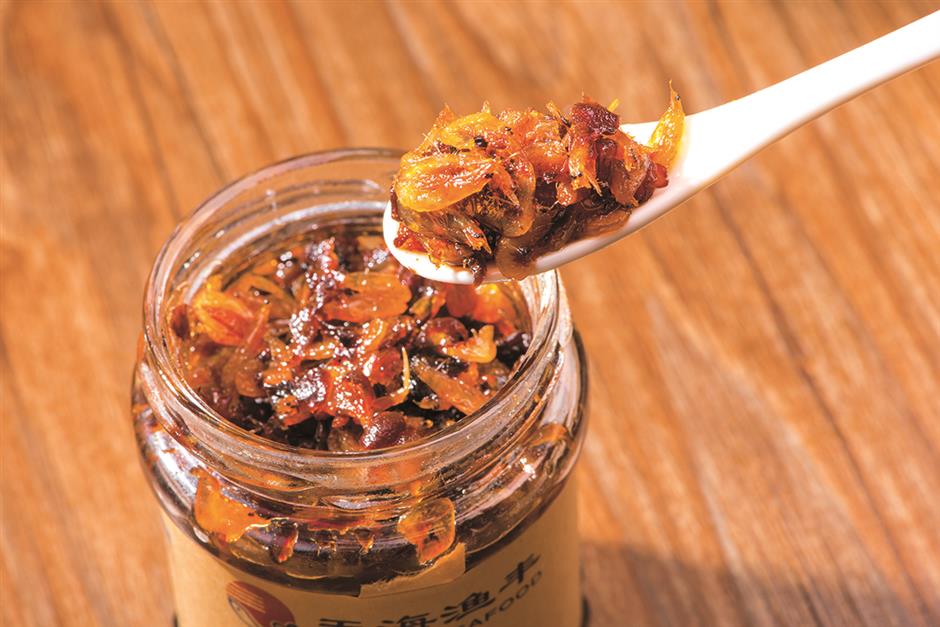