Buckwheat is a healthy “superfood” grain and traditional staple in Chinese cuisine.

It’s one of those foods that you see on the product labels and think of “healthy diet” immediately — buckwheat packs a high amount of fiber that’s very beneficial to health, it’s gluten-free and contains dietary minerals as well as protein.

There are different varieties of buckwheat, such as bitter buckwheat, black buckwheat and sweet buckwheat. China has a long history of cultivating and eating buckwheat, mostly in the form of staple dish. It’s widely grown in northeastern and northwestern provinces as well as some regions at a low altitude.

A common way to eat buckwheat in Chinese cuisine is making buckwheat noodles using ground buckwheat flour that sometimes is a dark color as is the result of the hull being mixed in.

Buckwheat is a healthy staple in Chinese cuisine.

People in Shaanxi Province are still making buckwheat noodles with the traditional pressing technique, a delicacy known as qiaomaiheluo. Instead of rolling out the dough with a rolling pin into a thin sheet and then cutting into thin shreds to make the noodles, heluo is a technique where the dough is pressed through a presser set above a large wok filled with boiling water, the presser has small holes and pressing the dough down hard will create noodles that fall into the water to cook instantly.

Qiaomaiheluo is usually boiled, drained and served with a flavorful, soupy topping like mutton soup or a stir-fried tomato, potato and pork dish with extra broth. The delicacy is usually served in two giant bowls, one for the plain noodles and one for the topping, and everyone can help themselves in buffet style.

The buckwheat noodles can also be stir-fried with meat and vegetables, or tossed with a chili oil dressing to make a cold noodle dish for the summer months.

Buckwheat fish-shaped noodles, or qiaomaiyuyu, are made by twisting a small piece of dough between the palms to create the fish-like appearance. They’re usually served with a topping and the shape is especially popular with young children. 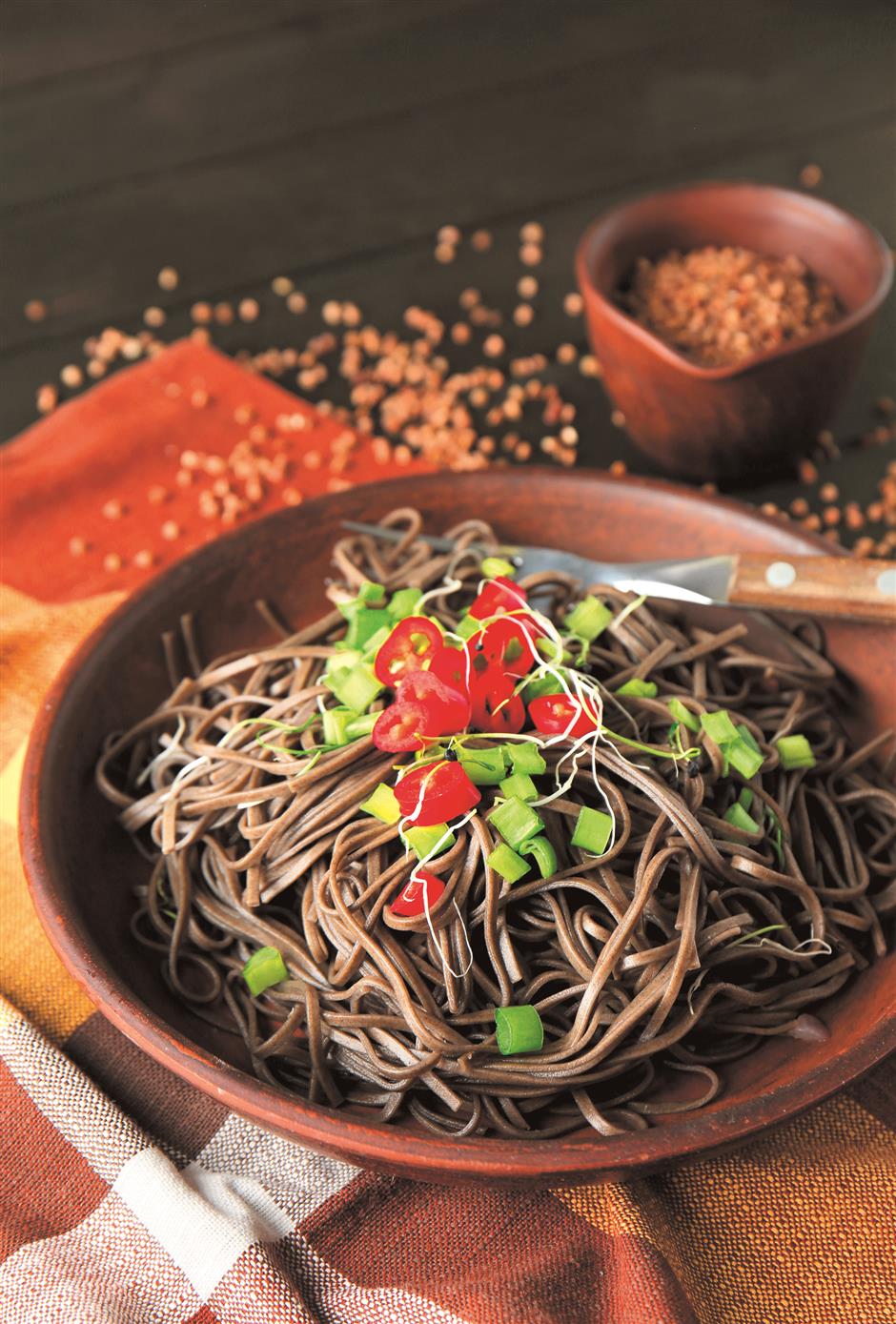 Buckwheat noodle with scallion and chilis

There are many kinds of buckwheat noodles sold in supermarkets, from the Japanese-style soba noodles that have been pre-cooked and sealed in bags, to dried Chinese-style noodles that can last a long time in the pantry.

Qiaomaiwantuo is a traditional staple dish in Shanxi Province, the name wantuo means dough in the bowl, as the dish is made by mixing buckwheat flour with rice and cooking in a steamer until the texture thickens. Then it is poured into small bowls and chilled. The buckwheat mixture will become jelly-like, and it’s served by drawing a few slices and seasoning with a sauce of vinegar, garlic paste and chili oil. The qiaomaiwantuo can also be cut into smaller pieces and stir-fried with vegetables and meats as the form can remain intact in cooking. 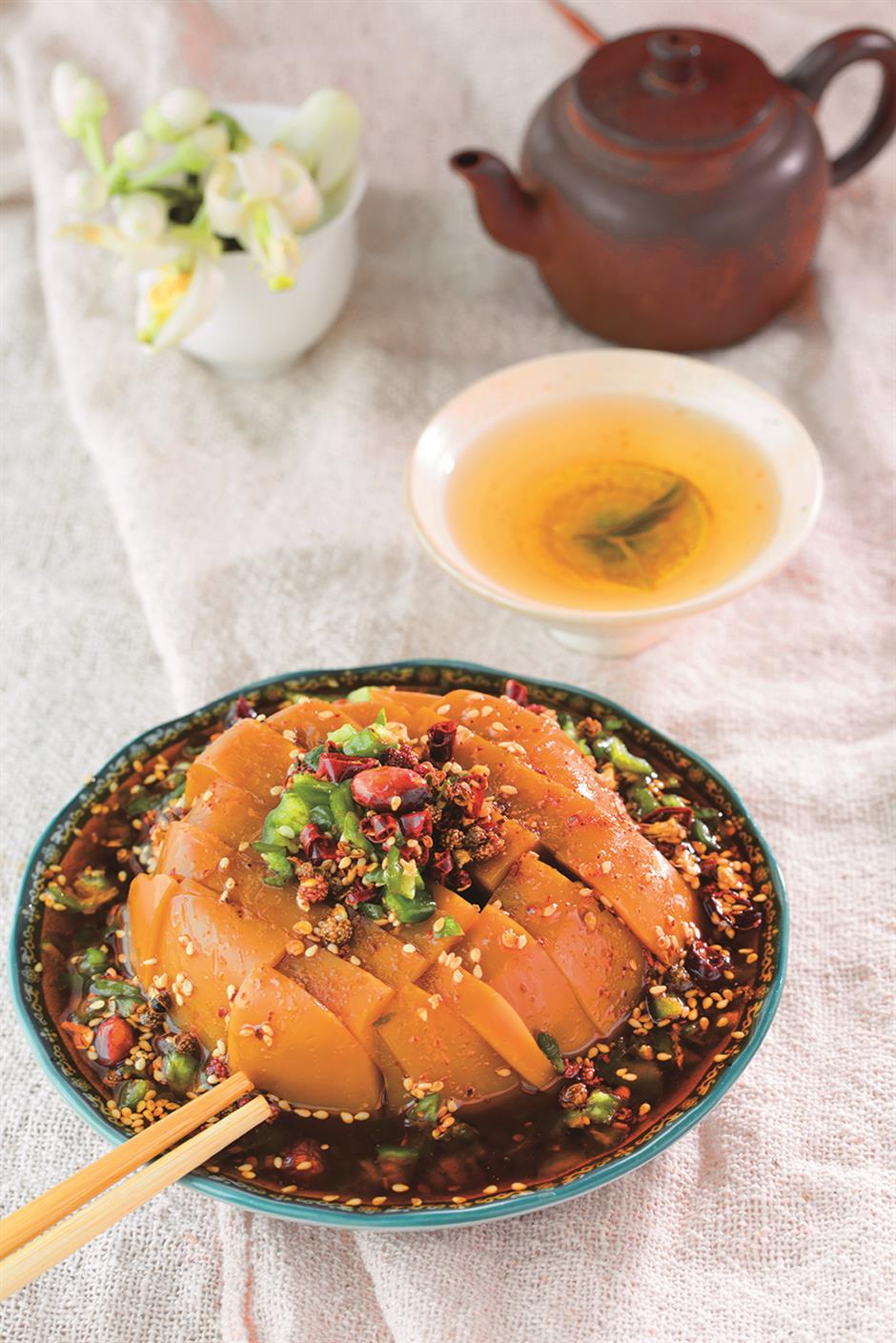 Buckwheat is a very healthy choice of carbohydrate, and there are different varieties of buckwheat alternatives to traditional staple items, like wonton and dumpling wrappers made of buckwheat flour, which are very popular with people who are seeking to lose weight or eat a healthy diet.

The wonton wrappers made of black buckwheat flour and whole wheat flour have a dark brown color, but the texture is very similar to those made of regular flour.

The buckwheat in its original grain form can also be used to make Chinese-style porridge with a wide range of healthy grains and beans, including red bean, Job’s tears, oats and others.

Some people also like to add buckwheat in their morning soy milk blend as an easy way to enjoy the healthy ingredient. 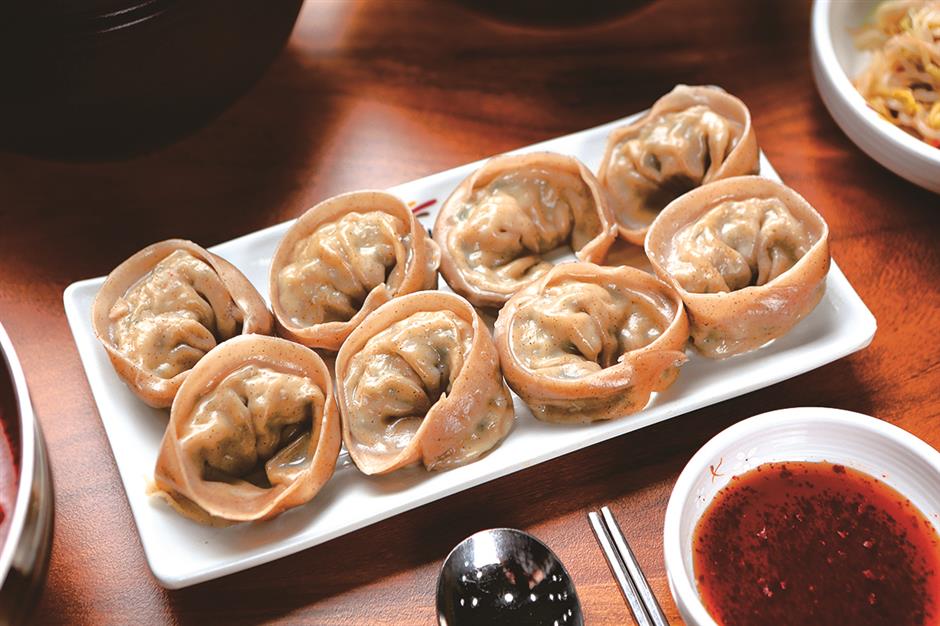 Wontons made of buckwheat wrappers

Buckwheat is a versatile grain that not only makes delicious and healthy staples.

A popular caffeine-free beverage in China is bitter buckwheat tea, which is made by roasting Tartary buckwheat kernels and then steeping them in hot water for a few minutes.

Buckwheat tea has a very strong, grain-like fragrance and slight bitter taste, making it a perfect drink to pair with rich, bold and greasy foods such as stewed meats and sweet traditional Chinese pastries.

The tea also boasts health benefits, such as antioxidant rutin and amino acids, as well as aiding digestion after a sumptuous meal and helping to regulate blood sugar levels.

Bitter buckwheat tea is also a great beverage to accompany spicy Sichuan hotpot and rich grills as the winter season draws near and people are craving for the sizzling and intense-flavored delicacies.

Bitter buckwheat tea is available in teabag form and many supermarkets carry the product. Good-quality tea should have golden brown and plump kernels, and the taste of the drink is pure, fragrant and free from peculiar smells. A more intense variety of buckwheat tea is bitter black buckwheat tea. 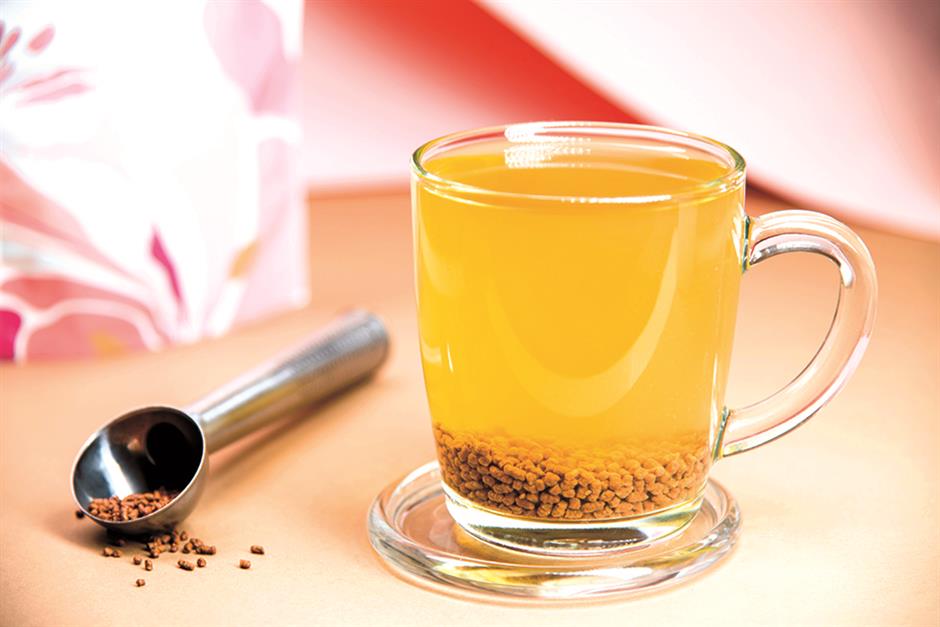 Traditional Chinese medicine has the concept of clearing dampness from the body, and there are different tea blends created for this purpose. Buckwheat is sometimes featured in special teas together with poria cocos, aged tangerine peel, Job’s tears, Gorgon fruit, lotus leaf and red beans.

Bitter buckwheat chips are a snacking alternative to classic potato chips and guoba, a deep-fried rice crust. The chips are very crunchy and pack strong flavors of the grain, and generally the commercial buckwheat chips are made with a blend of regular grain and buckwheat flour. The baked chips, though not as crispy and aromatic as the fried ones, are much healthier.

Plain buckwheat chips are also ideal to use as a base for finger foods instead of traditional chips, with toppings that include cheese and crab meat.

Crispy roasted buckwheat seeds are incorporated in other snacks to add texture, like nori crisps stuffed with sesame seeds and buckwheat bits.

﻿
Special Reports
﻿
Superfood that's a traditional staple
But does it go well with rice?
Bubbly sparkles for Beijing duck
Sardinia vines' fountain of youth
New autumn menus to delight your taste buds
Trick or treat! Halloween deals and new menus
Azul's chic Latino style fused with taste of the Med
BLENDS by Hennessy gets right mix on the Bund
No rules to making delicious soup
In the soup with Sicilian wine
EXPLORE SHINE