Sharpen your knife and heat up the wok

Stir-frying is a fundamental Chinese cooking technique that boasts infinite combinations and possibilities of flavors.

But there are several stir-fry dishes that can be found almost at any place, any time, whether you are in the north or south — tomato and egg stir-fry, pork and green chili stir-fry, and potato stir-fry, to name a few. These recipes are deemed national dishes, and Chinese people grew up eating these simple yet delicious stir-fries.

The humble potato is a staple in many cuisines around the world, and in China, potatoes make an array of savory dishes as well as street snacks.

The Chinese potato stir-fry is among the first family dishes people learn to cook, and perhaps the most difficult one since it requires some fine knife skills to cut the potatoes in super thin shreds.

A basic potato stir-fry only uses potato and spices. The first step is lightly frying garlic paste and a few dry red chilis until the aroma comes out, then the thin potato shreds are tossed in the wok on a high heat.

The correct texture of the potato should be fully cooked but crunchy. To achieve that, the thin potato shreds are soaked and rubbed in water to remove excess starch before they’re drained and cooked. 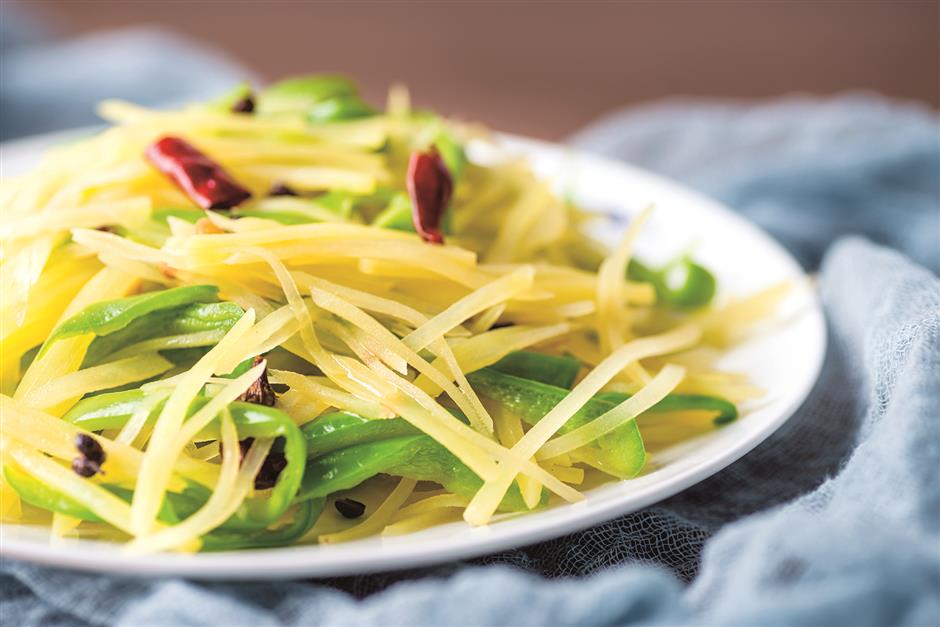 Potato stir-fry is a national dish made with the humble vegetable, it’s perfect to accompany rice.

Some people prefer the version with fresh green chili shreds, which is much spicier. The chili shreds are added after the potato shreds are almost cooked, so that they’ll remain crunchy and green in color. This dish usually has the original color of the two vegetables, but some people would add a little bit of soy sauce for the umami flavor and darker color.

There’s also a salad version of the Chinese potato stir-fry which can be ready in minutes. This boils the potato shreds that have been washed briefly to remove the starch and then chills in ice water to cool down before adding a rich dressing of garlic paste, chili oil, vinegar, oyster sauce, sugar, salt, soy sauce and white sesame seeds.

This delicious potato salad is great to serve with congee for breakfast or dinner. It can also be stuffed in pancakes or baked flatbread as a filling. 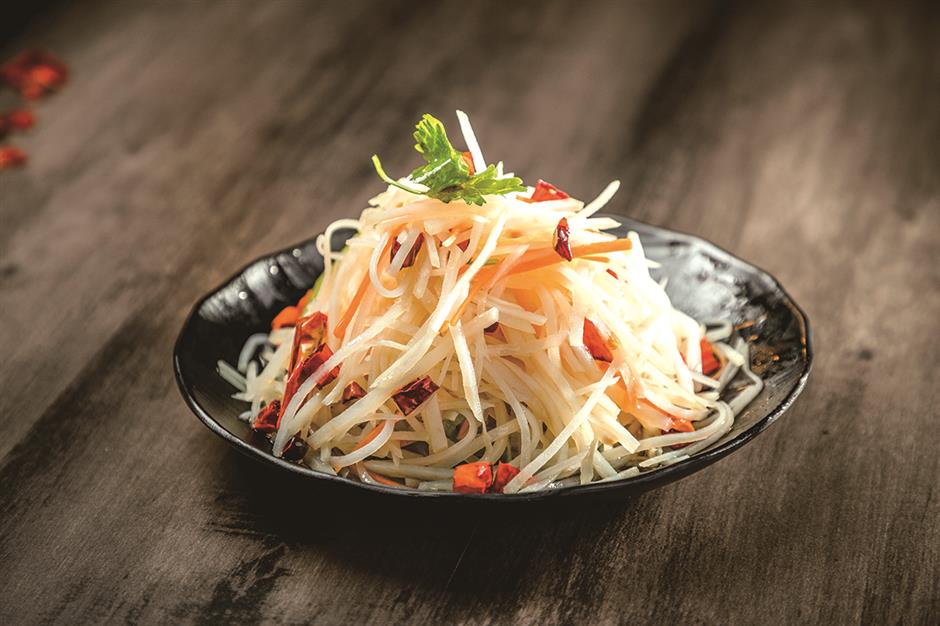 The potato is also one of the three “treasures of the earth” in the traditional disanxian dish in China’s northeastern provinces, alongside eggplant and green chili. This dish transforms three of the most common (and cheap) vegetables into a delicacy that person would choose over sumptuous meat dishes, and the secret is the step of deep-frying the vegetables before stir-frying — three minutes for the eggplant chunks which are already coated with a layer of starch, 10 seconds for the green chili and five minutes for the potato chunks.

A basic sauce used to flavor the disanxian dish is light and dark soy sauce, oyster sauce, sugar and salt, which are mixed well in a small bowl with some water and starch (to thicken the sauce). To put the stir-fry together, the sauce is first stir-fried with garlic to unleash the fragrances, then pour in the deep-fried vegetables and mix well. 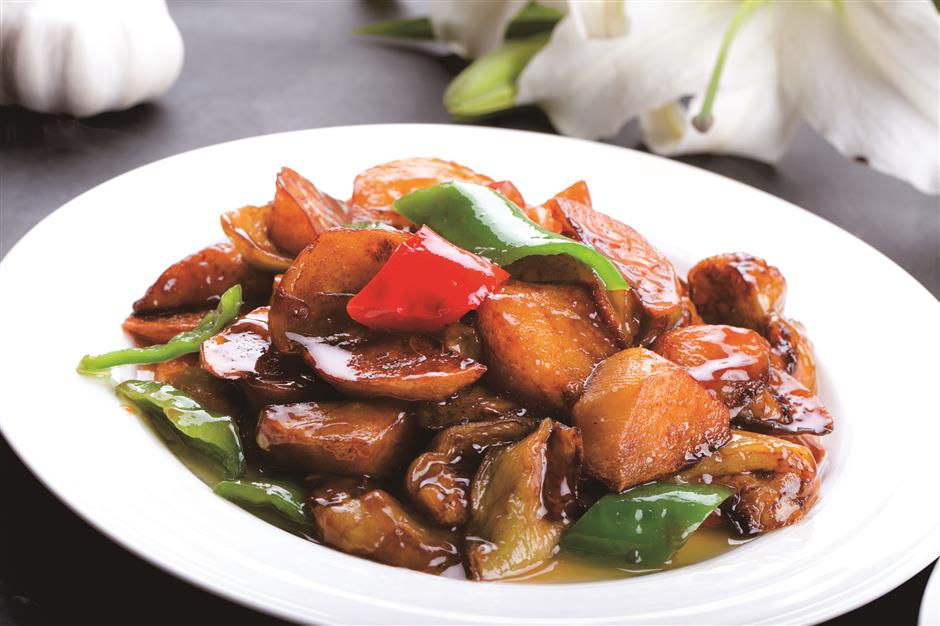 Disanxian with potato, eggplant and chili

There’s also a more snack-style potato stir-fry in Chengdu, Sichuan Province, that’s especially popular among young people. It’s called guoba potato, guoba is the name of a Chinese snack made of rice or grain, and the potato in this dish has a crunchy crust that resembles the snack.

The potatoes are cut in smaller pieces and then steamed for around 30 minutes until they are fully cooked. Then pan-fry the potatoes with a moderate amount of oil until all sides become golden in color. It takes patience to flip and turn the potatoes constantly to avoid burning them. Pour off the excess oil and turn off the heat. Add spicy chili powder, Sichuan peppercorn powder, cumin powder, chopped scallion and cilantro, toss well and stir-fry with the residual heat of the pan.

The authentic potato snack in Chengdu often features fish mint, or yuxingcao, as a topping. It’s a fishy-smelling herb popular in southeastern China. It’s often listed among the top 10 most disgusting vegetables in China and a food nightmare for many who are not used to the local cuisine.

Langyatudou is another similar potato snack in Chengdu. The potatoes are cut in thick wavy sticks so that they can later hold on to the rich sauces, and deep-fried until crispy and golden on the outside. The fries are set aside on a paper towel to take away the extra oil, while in a pan a generous portion of garlic and red chili is stir-fried, adding chili oil, peppercorn powder, chili powder, cumin powder, oyster sauce and soy sauce until everything is cooked and aromatic. The fried potato sticks are added to the sauce and the stove is turned off. Using the residual heat, they are stirred well until every surface of the potato sticks is covered in the spicy sauce. The snack is garnished with cilantro or scallion and white sesame seeds, and it’s served hot. In rich meat stews, larger pieces of potatoes are usually added when the chicken, pork rib or beef brisket is cooked while there’s still a lot of the rich broth in the pot. The potatoes are then simmered with the meat until they become very soft and almost melting on the surface from absorbing the delicious broth.

Potatoes are the main vegetable ingredient in Xinjiang-style “big-plate chicken” and the pieces are usually quite large to prevent them from breaking apart during the longer braising time.

In soup dishes for the colder months, potatoes are often added as a filling ingredient. A quick Chinese soup featuring potatoes is tomato and potato soup, with the potatoes cut in smaller pieces to reduce the cooking time. The tomatoes are cooked first until soft and the juice comes out, then potatoes and water are added until everything is fully cooked. Season with just salt.

A much richer potato soup would be pork rib soup with tomato, potato and corn, a comforting dish highlighting the soft potatoes which are infused with the rich pork flavor and chunks of corn with the cob still on to add sweetness.

Potato pancakes made with steamed and mashed potatoes, egg, flour and vegetables is a great healthy breakfast dish. The texture of the pancake is very soft because of the addition of potatoes, and it’s simply pan-fried in a non-stick pan with very little oil as the potatoes are already cooked.

Another version of potato pancake is to use very thin potato shreds and mix with a flour batter, which is poured into a non-stick pan with some oil and then pressed down with a spatula to make a flat, thin pancake. The texture of this pancake is crispy and it can also be a nice snack. 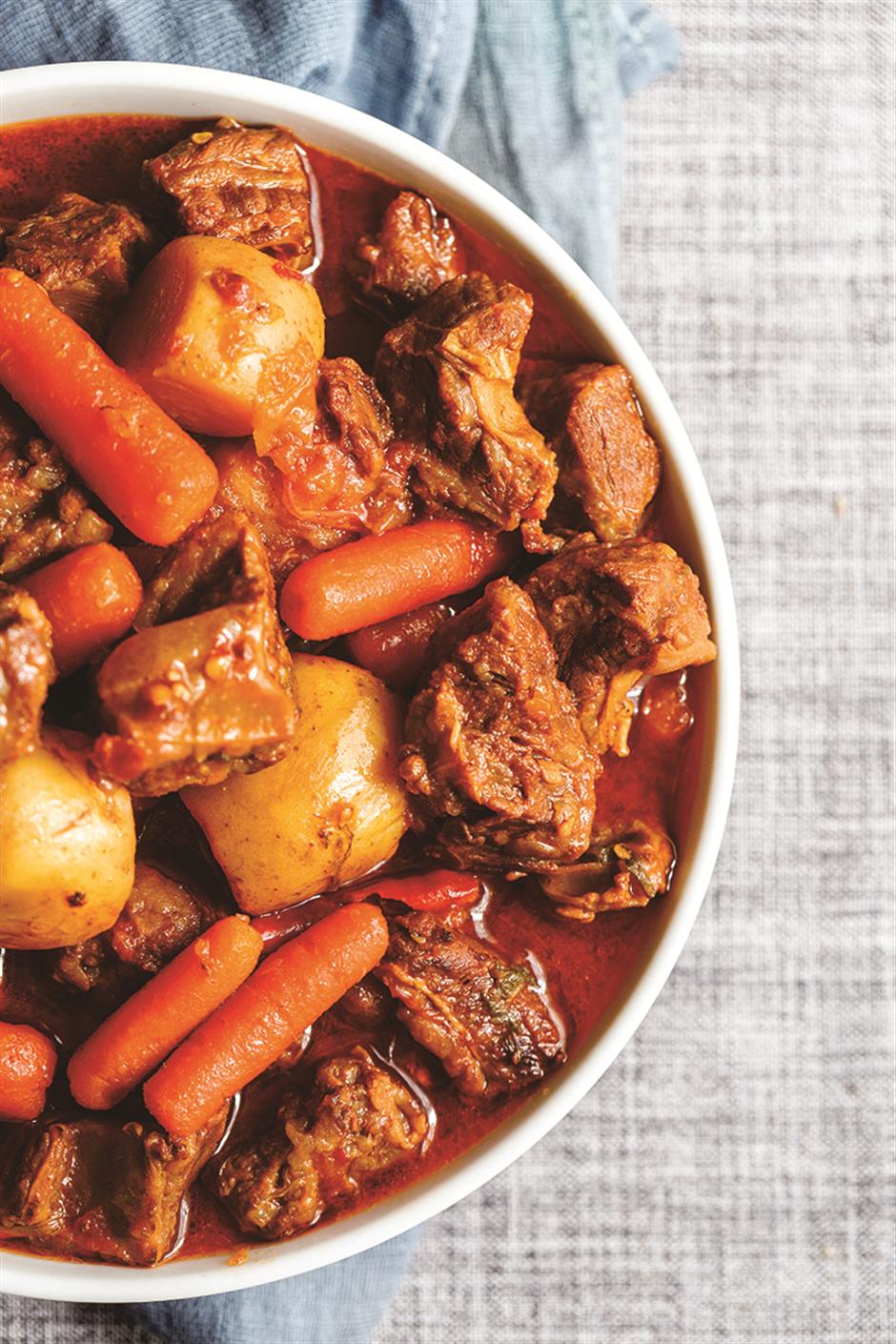 Special Reports
ADVERTISEMENT
Sharpen your knife and heat up the wok
Steamed dumplings with bamboo shoots and meat fillings had crowds queuing up
Festival makes you want to eat your veggies
Spanish wine sweet on potatoes
Superfood that's a traditional staple
But does it go well with rice?
Bubbly sparkles for Beijing duck
Sardinia vines' fountain of youth
New autumn menus to delight your taste buds
Trick or treat! Halloween deals and new menus
EXPLORE SHINE