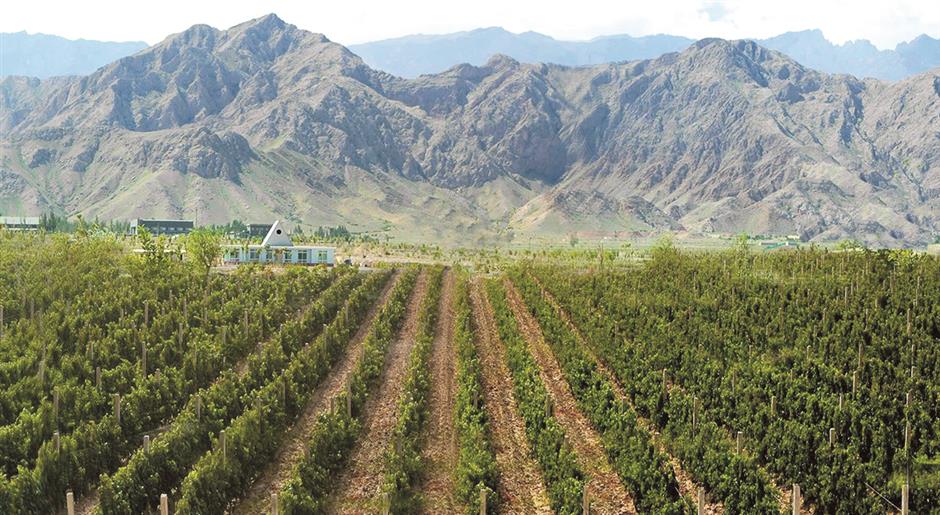 Vines under the majestic watch of Helan Mountain

This week’s feature tasty story on jujube resonates with me as I’m presently in the Ningxia Hui Autonomous Region which, among other regions of China, produces some of the most notable examples of the fruit. The versatile little jujube can be consumed fresh or dried and used in a wide range of Chinese desserts, dishes and soups.

The jujube fruit is sometimes referred to as red or Chinese date, although jujube and dates are botanically unrelated. This deciduous shrub looks more like a tree and is considered one of nature’s super foods because of high levels of calcium, potassium, saponins, flavonoids, betulimic acid and vitamins A and C. In Chinese medicine, the fruit is used to reduce pain and anxiety, induce sleep and fortify the immune system.

In addition to jujube fruit, the relatively small region of Ningxia also produces some of China’s most distinguished grapes; specifically, the kind used to make wines.

China’s wine history is ancient, but winemaking in Ningxia is quite new. In the 1980s, a small group of intrepid winemakers had dreams of reclaiming dry and barren land from the desert and planting vines to make wines. Fast forward 40 years and the Helan Mountain East Foothills of the Ningxia Hui Autonomous Region has become China’s premier quality wine region. There exist older, bigger as well as some newly promising regions, but Ningxia stands out as having the greatest critical mass of quality winemakers. And things are just getting started.

The success story of Helan Mountain East Foothills six sub-regions is still being written and in so many ways they’re still in chapter one. The ample growing season, sunshine, hot and dry climate, varied permeable soils and elevation that helps provide pronounced diurnal temperature differences are important reasons why all of the six sub-regions are able to make excellent wines.

With a few notable exceptions, vines are young; so much so that winemakers I spoke to like to refer to 20-year-old vines as old vines. In the wine world’s more established regions, old vines are half a century or older, so referring to 20-year-old vines as old is somewhat amusing. What’s truly amazing is the seriously good wines Ningxia’s winemakers are producing from their young vines.

Despite unprecedented advances, some challenges persist. The frigid winters mean that vines must be buried every autumn after the harvest, a work-intensive and costly process that results in the death of 3 to 5 percent of the vines each year. The relatively high cost of most Ningxia wines is also an issue.

Collectively, producers and regional authorities will need to up their game at branding and marketing to justify the elevated prices. Globally, other regions have achieved this, and I’m confident that with time Ningxia will also be able to implement more successful premiumization communications.

Presently, there are over 40,000 hectares under vine with the most planted variety being Cabernet Sauvignon. Admirable reds are also being made from the Marselan, Merlot and Syrah varieties, and experimentation with other varieties is increasing. Chardonnay and Italian Riesling are the most important white varieties. As the favored varieties mostly indicate, the influence of French winemaking is indeed substantial. Many of the winemakers in the region studied in France.

The young winemakers in Ningxia are super dedicated and talented. Zhang Jing of Helan Qingxue Vineyard, Deng Zhongxiang of Chateau Lansai, and Liao Zusong of Xige Estate are among a growing cadre of winemakers that are bringing the high-quality wines of Ningxia to the world’s attention. Great credit must also go to pioneering hands-on owners like Emma Gao of Silver Heights, Crazy Fang of Kanaan Winery and Sun Miao of Domaine des Aromes. Large-scale investments by LVMH, Pernod Ricard and Changyu are further affirmations of the region’s potential.

Another significant milestone in the advancement and internationalization of the Helan Mountain East Foothills region will be the 28th Concours Mondial de Bruxelles (CMB) wine competition to be held in the region in May 2021.

CMB is the world’s biggest and most prestigious wine competition that annually brings together over 300 of the world’s most renowned winemakers, journalists and other wine professionals to judge over 8,000 wines from the four corners of the wine world. The first ever CMB competition outside of Europe was held in Beijing two years ago.

CMB is often referred to as the United Nations of Wine and next May during the ceremonies and competition, Ningxia will be the center of the wine universe. I’m honored to be a longtime CMB judge, and next year’s competition will certainly have special meaning for me and my winemaking friends in Ningxia. Next May, I’ll also take particular delight in sharing the distinguished wines and local cuisine of Ningxia with my fellow CMB wine judges.

One not to be missed paring I’m sure all the CMB judges and other visitors will lovingly savor is Ningxia red wines with the local lamb dishes. Just like wines, the most prized lamb of Ningxia has a specific geographic origin. For centuries, Yanchi County with its natural environment has been famous for raising the region’s most sought-after sheep.

The meat is known for even fat distribution, low cholesterol, tenderness and a delicate flavor.

Yanchi lamb has many synergistic wine partners but the only true spiritual companions are the wines of Ningxia.