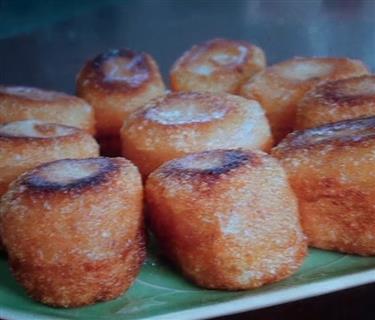 Sijing fried sticky rice balls with meat fillings, fried until their crusts are crispy and their insides hollow, are a popular local snack with Songjiang residents as they like both their lantern-shaped appearances and their good taste.

First, glutinous rice flour, the major ingredient, is mixed with clean water, a small portion of wheat flour and a little lye water. The use of lye water is to balance out the tart flavor of the glutinous rice flour. The spring onions are chopped and added into the minced meat.

Then pieces of dough, each weighing about 35 grams, are each filled with 10-grams of the meat filling.

A tip to make the rice balls swell layer by layer, looking rather like sedimentary rocks, is to add hot oil into a pan several times instead of just once.