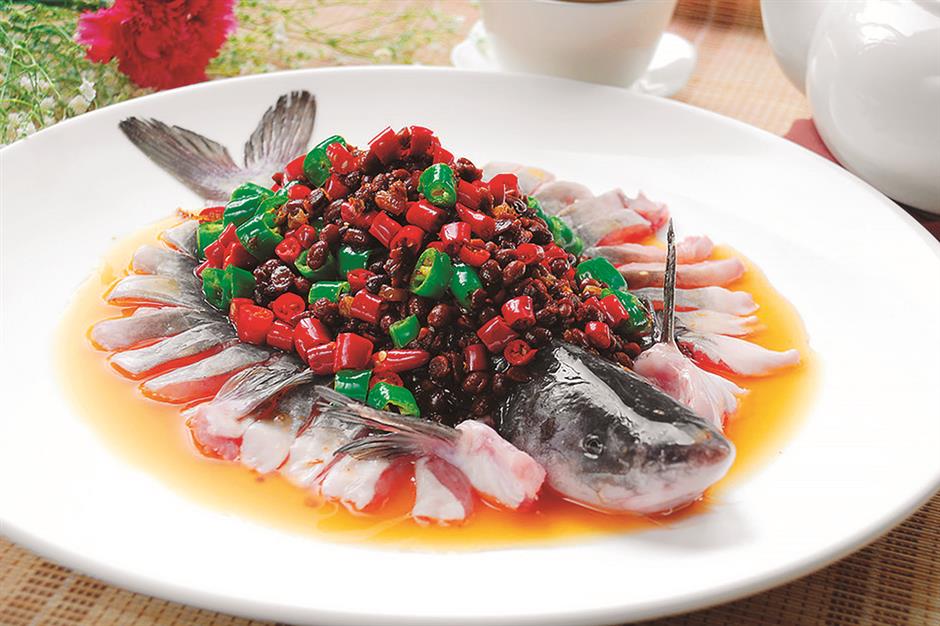 The season of revival is not only for enjoying healthy greens, but also a time to enjoy the first batch of delicacies from the rivers and seas before the fishing ban begins in late spring and ends in early autumn to allow the fish, crustaceans and shellfish to grow and breed sustainably.

Known as daoyu in Chinese, the knifefish is an extravagant delicacy available only for a limited time from March to early April, the earliest seasonal fish in spring.

It’s a fish that is elongated, flattened and blade-shaped that swims by rippling its ribbon fin.

But other types of knifefish are still widely sold in markets and served in restaurants, and these fish are legal to purchase and eat because they come from the sea. The ocean knifefish also have the umami flavor that fans of the delicacy seek, and at a cheaper price.

To enjoy the fullest flavor of knifefish, the best way is to steam the whole, fresh fish. The basic recipe is to steam the fish with scallion and ginger to neutralize the fishy smell and taste, then season with salt and a splash of hot oil poured onto seasoned seafood soy sauce just before serving to boost the salty, umami flavor.

A more flavorful and flashy technique to steam the fresh knifefish is to top with pieces or shreds of fine cured ham with white radish, shitake mushroom or spring bamboo shoots, creating complex layers of flavors that will burst in the mouth. To bring the richness to a new level, some would add lard when steaming the fish.

Knifefish noodles, on the other hand, are a more common delicacy made with a stewed knifefish soup. It has the same surprising flavor of the fish, yet is at a much more affordable price.

Another popular trend in recent years is knifefish huntun, large wontons with sumptuous fillings served in a tasty broth. The best place to enjoy knifefish huntun is Jiangyin, Jiangsu Province, which is about two and half hours’ drive from Shanghai. Across the city, many restaurants are serving this seasonal specialty. You can either enjoy a hot bowl of huntun with soup or purchase ready-made fillings and make fresh batches at home. 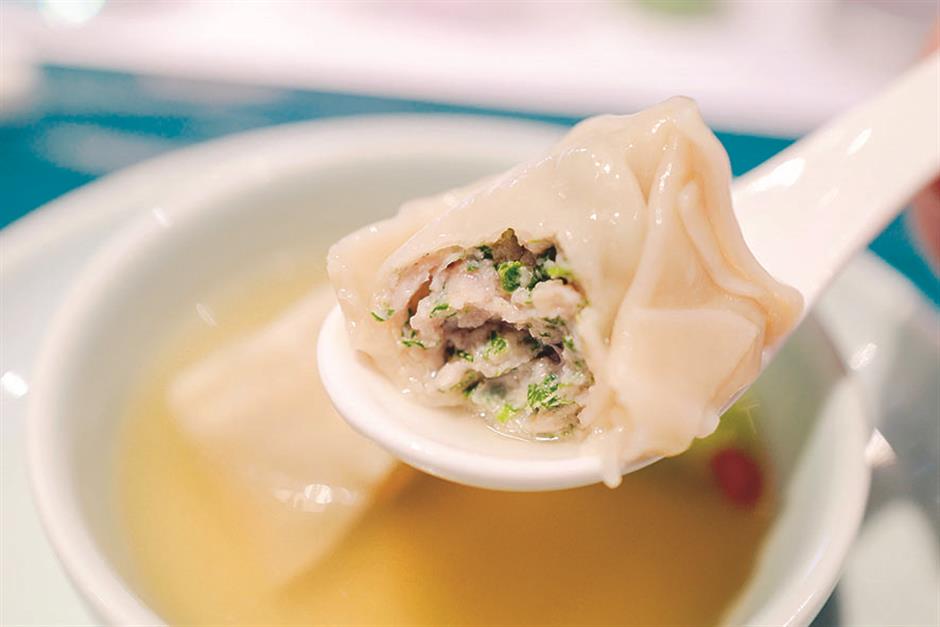 The knifefish filling has a very different texture from the traditional pork filling, it’s much softer, stickier and boasts a strong seafood flavor. With fish filling, there’s usually a vegetable added to balance the flavor and texture — like the famous mackerel dumplings in Shandong Province that are usually complemented with chives.

For knifefish, the choices are shepherd’s purse or chives, two of the most popular springtime greens, with the latter providing a much stronger umami flavor. Yet not everyone can accept the strong aroma of the chives, thus shepherd’s purse is a safer option for those planning to serve the dish to friends and family. Sometimes spring bamboo shoots are also added for an extra crunch.

The knifefish filling also features some portions of minced pork for the purpose of making the delicate fish texture workable, and softer flour wrappers also work better in this case. The price for 500 grams of knifefish filling is between 150 to 200 yuan. It can be stored frozen for an extra amount of time.

Leiocassis longirostris, the Chinese longsnout catfish known as huiyu or jiangtuan, is a freshwater fish from the Yangtze River that’s right in season just now. The medium-sized fish is famous for its smooth and rich flesh as well as fewer bones. There’s — a folk saying: “If you don’t eat jiangtuan, you don’t know the flavor of the fish.”

The Chinese longsnout catfish has a higher fat content that contributes to its delicate texture, and the best part of the fish is certainly the soft belly.

Fresh fish that are caught and sold the same day are perfect for steaming with ginger and scallion. The meaty variety is also widely used in braised/stewed dishes and even the spicy grilled fish — the grilled fish is served over a bed of vegetables in a heated pan, topped with an insane amount of chilis or condiments such as fermented soy bean sauce for the non-spicy versions. 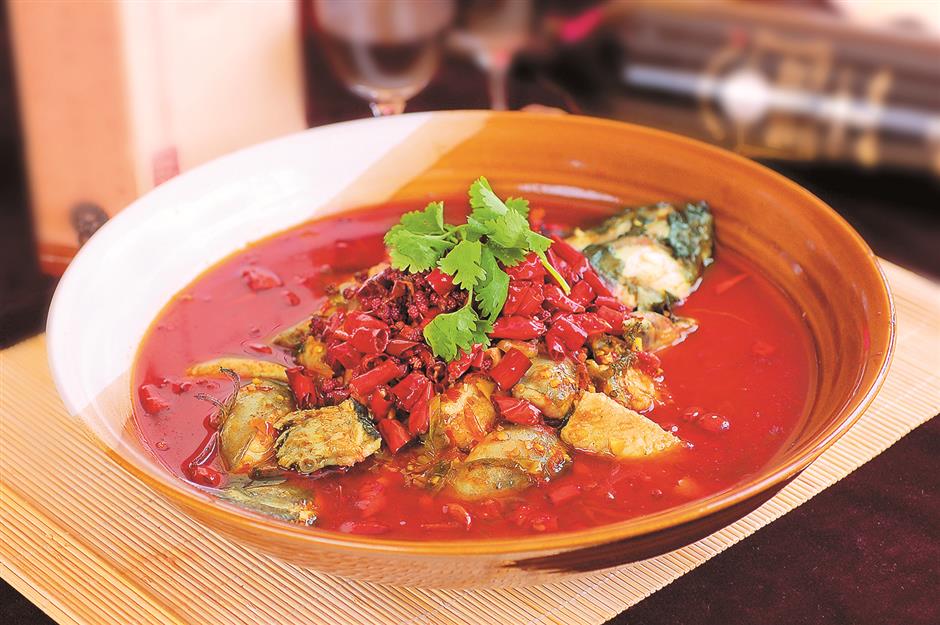 Collichthys niveatus, or meitongyu, is an abundant small fish that’s very similar to small yellow croaker in terms of appearance and flavor, but in smaller sizes. It has a large head and small eyes, weighs between 16 to 50 grams with a length of 9 to 14 centimeters. The fish is usually consumed fresh by steaming with rice wine and ginger.

From the East China Sea, the spring batches of cuttlefish and squid are also arriving in the markets every day.

The larger-sized cuttlefish is boneless, extra juicy and meaty. The fresh cuttlefish needs to have its skin, cuttlebone and mouth removed before thoroughly rinsing for cooking.

With squid, the bones, residue inside the body cavity, eyes, mouth and skin need to be removed. Poached squid is a one-step recipe to enjoy the full flavor of the freshest squid, with ginger and scallion added to the water to remove any fishiness. The poached squid can be placed into an ice bath immediately after cooking to keep the crunchy texture. The dish can be served with a simple dipping sauce of soy sauce and vinegar as a cold appetizer.

In addition to the abundance of fish, delicacies such as gazami crabs, river/field snails, freshwater or sea mussels are available during the spring fishing season. 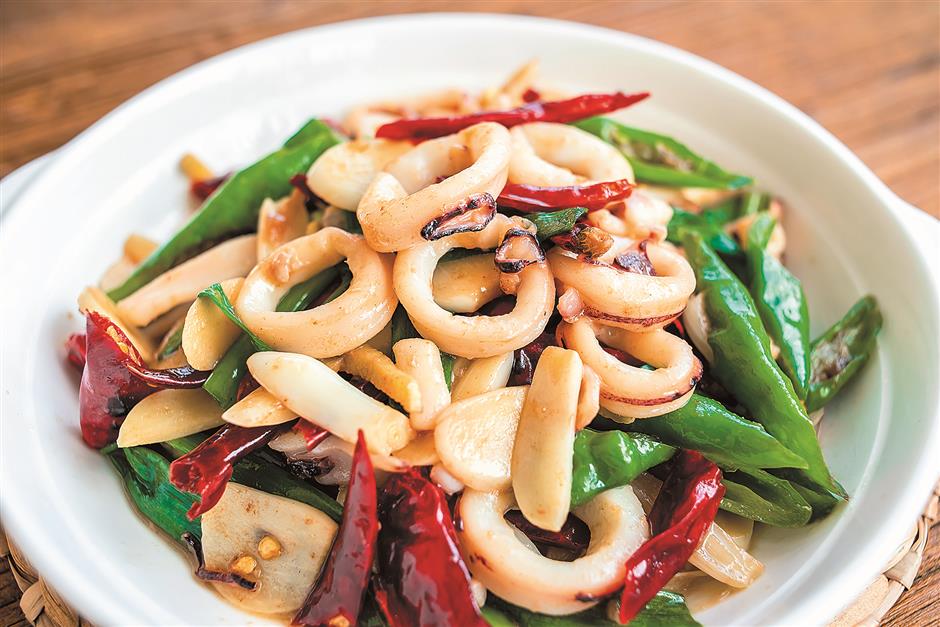