Dumplings in all shapes and sizes: texture and taste wrapped together

The term dumpling can refer to many forms of delicacies involving wrapping some kind of savory or sweet filling inside thin sheets of flour wrappers. One of them is huntun, or more commonly known as wonton in English.

Back in the Western Han Dynasty (206 BC-AD 25), huntun was already recorded in literature as a type of bing, or bread, with the difference of having a filling and needing to be cooked to eat. If cooked in liquid, it was known as tangbing.

Huntun and jiaozi weren’t very different in ancient China. It wasn’t until the Tang Dynasty (AD 618-907) that the two foods were clearly distinguished by name. Huntun especially thrived in the southern parts of China.

Though the translation is interchangeable, the wonton known in the West is very different from the original huntun in traditional Chinese cuisine. In China, huntun must have savory fillings, just like jiaozi, and the most common type is ground pork with additional ingredients to boost different flavors and textures.

The wonton with a cream cheese filling, like crab rangoon, is purely an American food. Chinese huntun is very rarely deep-fried, it can be pan-fried with a little bit of oil to achieve the crispy and aromatic edges that contrast the soft filling, but not fried in oil to serve as a snack.

Huntun can be served with soup or drained with a flavorful dressing such as chili oil sauce or sesame sauce.

This week, we’ll take a look at the different huntun variations across China. 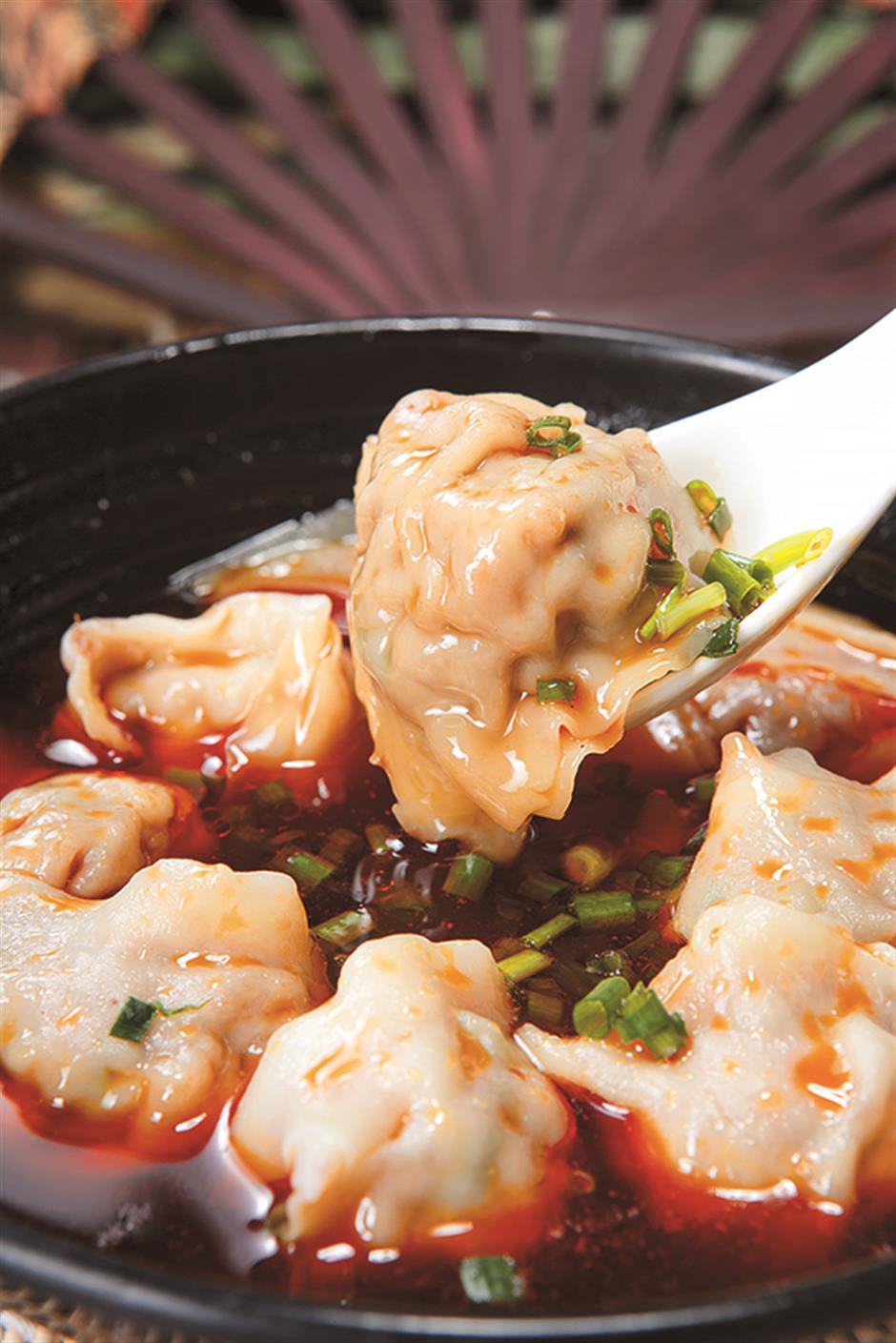 Huntun comes in all shapes and sizes, mostly with savory meat fillings.

The most obvious difference between huntun and jiaozi is their shape. Huntun uses thin square dough wrappers that are usually machine-made to guarantee thinness and consistency. When boiled, the wrapper can become semi-transparent, while jiaozi uses round dough wrappers that are thicker to protect the filling from falling out. Handmade jiaozi wrappers are preferred for their texture and taste.

Huntun wrappers are also smoother when cooked, and it takes a shorter time than what’s needed for fully cooking the jiaozi. For softer fillings such as those that are fish or shrimp based, the huntun wrappers need to be not only extra thin, but also very soft, to make sure both the filling and skin can be cooked evenly.

Locally, there are two types of huntun — xiaohuntun which is the small one and dahuntun, the larger kind with more filling.

Xiaohuntun takes no specific shape, and only a small amount of seasoned pork filling is wrapped inside super-thin-and-small wrappers that form a tiny fish tail at the end. They are usually boiled in water and served in a simple soup flavored with lard, thin shreds of fried egg, seaweed, dried small shrimp and finely chopped scallion.

The speedy dish is typically eaten for breakfast and dinner. With its soft skin, flavorful filling and appetizing soup, it’s also an iconic comfort dish.

Dahuntun, on the other hand, are not only larger in size, but also have more solid wrapper texture.

As more filling is needed to make the bigger huntun, vegetables such as shepherd’s purse, shitake mushrooms and bamboo shoots are incorporated in the minced pork filling for a more diverse flavor and texture, as well as shrimp to boost the umami flavor.

Wrapping dahuntun is also more complicated than the technique used for the smaller counterpart (which is by squeezing the wrapper tightly together to seal). After placing a small spoonful of filling in the middle of the squared dough wrapper, the edges need to be moistened with water first before folding diagonally to seal in the fillings and then twisted to the back to form an ingot shape. The tiny bit of moisture on the edges can prevent the fillings from falling out during boiling.

Dahuntun can be served in a light broth of seaweed, dried small shrimps, scallion, soy sauce and seasonings, or simply pan-fried, which can create delicious, crispy edges. They can be served with Worcestershire sauce. 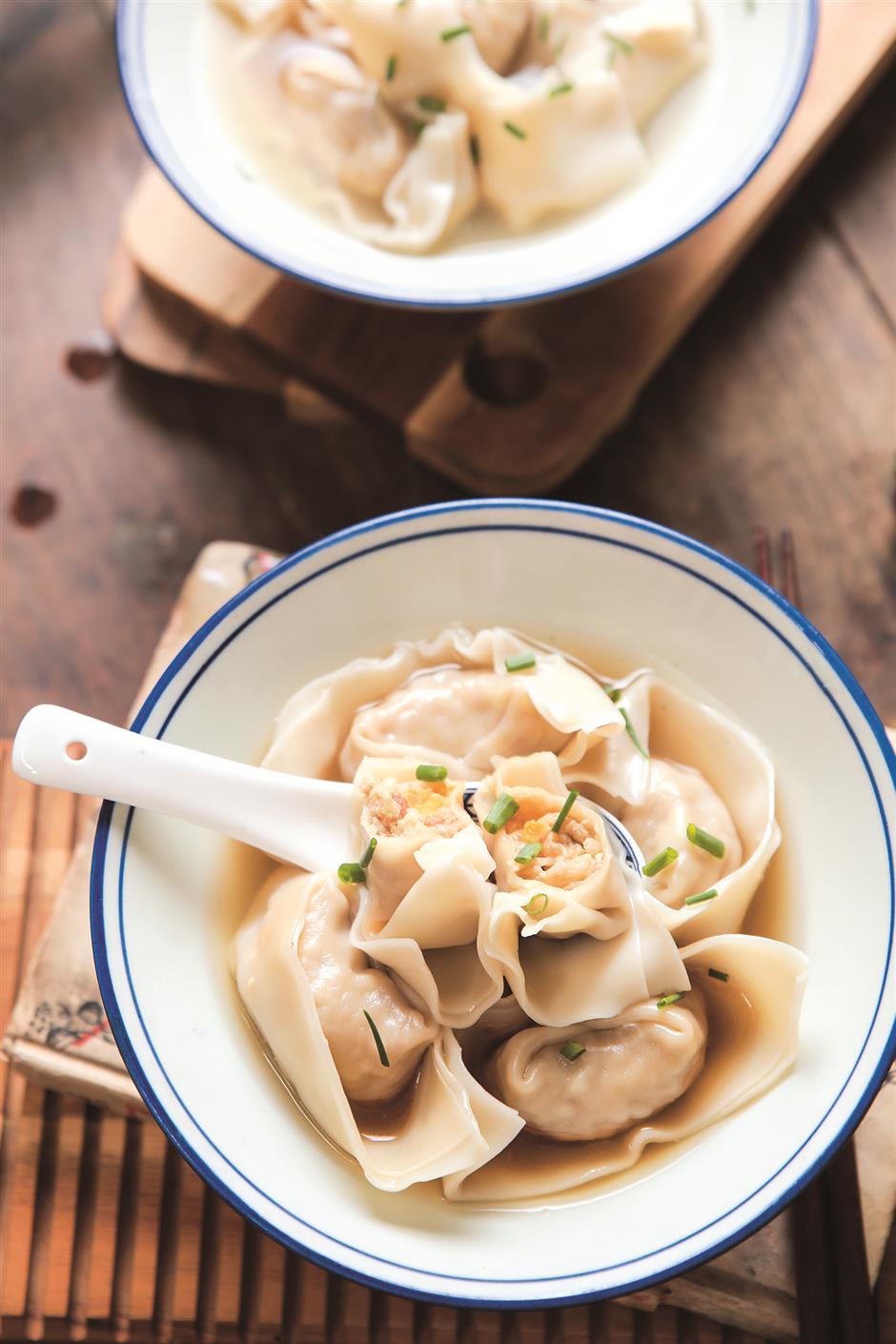 Meanwhile in the southwestern province of Sichuan, huntun is referred to as chaoshou, which is translated into “folded arms” as the dough wrapper is folded into a triangle with each end pressed against the opposite sides.

Chaoshou also has a minced pork filling, but the biggest difference from huntun is how it’s served: boiled chaoshou is drained and served in a seasoned chili oil sauce, with the vibrant chili oil coating all over the chaoshou for an intense flavor. In addition, the seasonings and condiments include soy sauce, chopped pickle, white peppercorn powder, minced garlic, vinegar and white sesame seeds.

The skin of chaoshou should be thin and transparent when cooked, and the wrinkles can especially take on the flavorful sauce. In Chongqing, more peppercorn powder is added to the sauce to boost the tongue-numbing sensation.

Chaoshou can also be non-spicy — served in a light broth of mushroom, vegetables, bamboo shoots, or for a richer version use chicken soup. 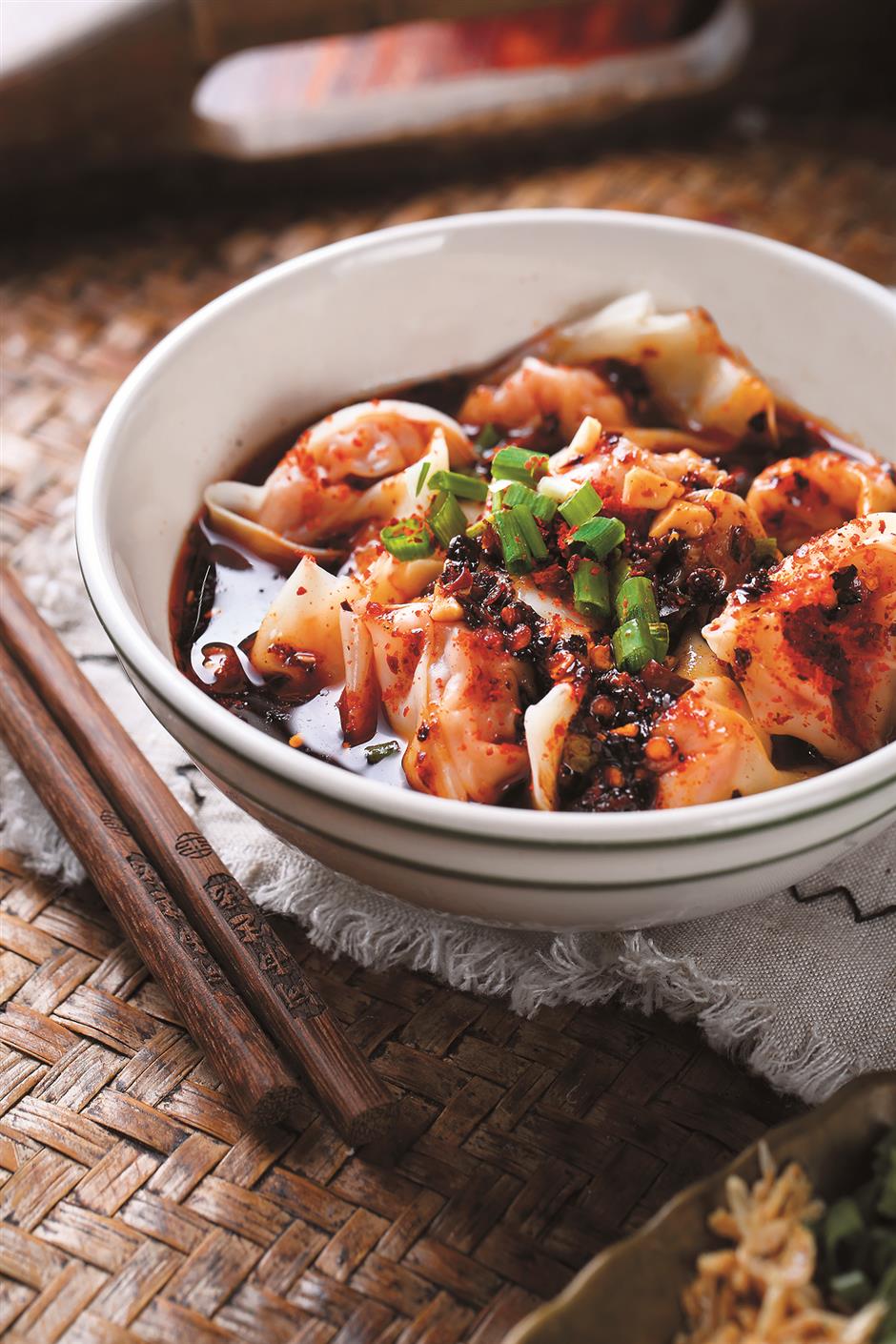 In Cantonese cuisine, huntun is referred to as yuntun (cloud swallow), and the more common type is a filling composed of minced pork and whole shrimps. Yuntun served with thin noodles known as zhushengmian— a type of noodle made only with egg and flour, which is squeezed with large bamboo, is a classic Cantonese dish. The soup is usually cooked with pork bones, with a few stalks of poached green vegetables on top for color and texture.

The wrapper for shrimp yuntun is extra thin, making the filling look like a hearty meatball. The noodle needs to be bouncy in texture, so the two are cooked separately before serving in the soup with toppings. 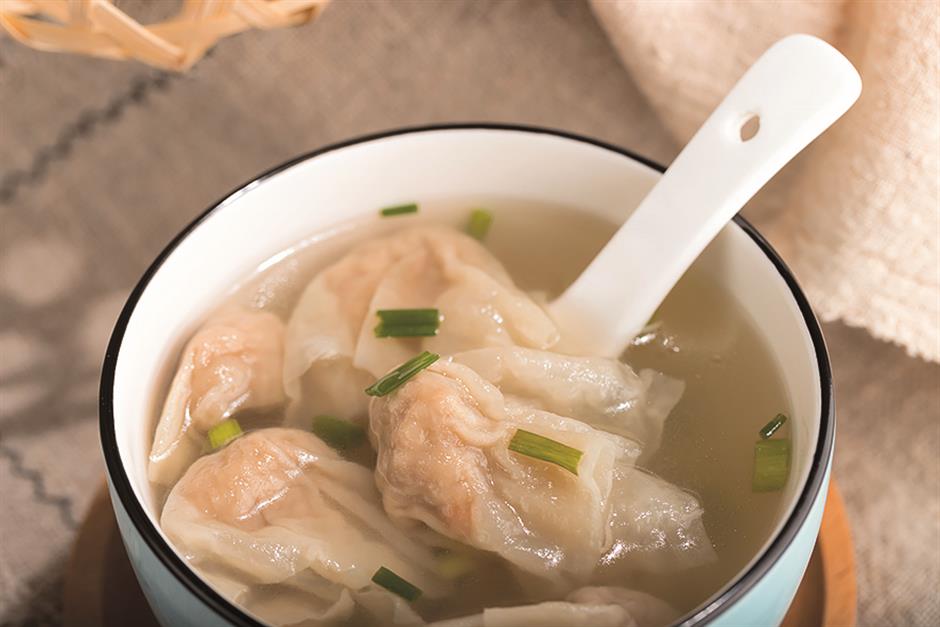