In the vast market of dazzling beverages, traditional Chinese drinks have never lost their appeal. When Sichuan hotpot becomes too spicy to handle, a glass of chilled sour plum drink is an immediate rescue.

Traditional Chinese beverages are usually made of everyday fruit or vegetables combined with medicinal herbs and spices to boost the health benefits, and additional sugar and flavorings such as osmanthus flower to elevate the taste.

In general, the original recipes are usually on the sweet side with a lot of rock sugar or brown sugar added during cooking, so modern adaptations would cut down the amount of sugar significantly for health reasons, and it’s still recommended to drink in moderate quantities despite the great taste.

Suanmeitang, or sour plum drink, is a traditional Beijing-style summer drink with benefits including quenching the thirst and expelling phlegm. In the Qing Dynasty (1644-1911), street peddlers were selling drinks by knocking two small copper bowls together to attract people’s attention. As the sweet-and-sour drink was so appetizing just by thinking about the flavor of the plum, the passengers could feel cool even when hearing that sound. 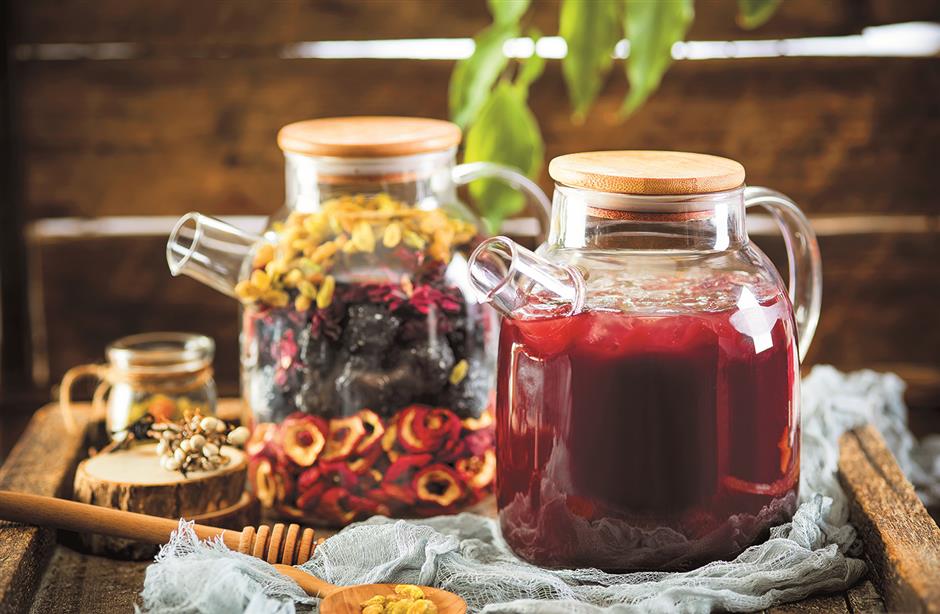 A traditional sour plum drink is made by boiling and simmering the natural ingredients in a large pot of water: dried dark plum, dried hawthorn fruit, aged tangerine peel, licorice, osmanthus flower and rock sugar. The classic technique requires two rounds of stewing to fully extract the flavor and nutrition from the ingredients, and premium quality ingredients are preferred to achieve the desired purity. Some TCM ingredients may carry some residue from the drying process that would disturb the taste and texture.

Today, people are also adding ingredients such as roselle flower tea and jujube into the sour plum drink for richer flavors. The sugar is added to taste, and can be substituted with honey.

The sour plum drink’s distinct herbal taste may take some time to get used to, but it’s a perfect remedy to cleanse the palate after eating strong-flavored and rich dishes. It’s also better enjoyed chilled or over ice to tone down the sourness, which is more obvious when served hot.

In addition to the fresh sour plum drink made by boiling the ingredients directly, there are ways to make the drinks more efficiently at a much cheaper price — by mixing sour plum paste or extract in water with food flavorings. While authentic sour plum drink has a thick, dark brown color with a glistening finish, the lesser version has lighter color and dull, astringent taste.

There are many brands of sour plum drink products, and the label would indicate if the drink is made of original ingredients or sour plum paste and food flavorings. The former usually has a shorter shelf life (around a month) and is usually sold chilled. A carbonated version is also available for those who wish to bring in some fizz.

Winter gourd tea is another traditional summertime drink that’s caffeine-free, sweet and herbal. Winter gourd is an everyday Chinese vegetable that can be cooked in stir-fries or added in braised dishes and soups. The gourd itself packs minimum flavor, and it’s one of the most popular vegetables in summer because of its properties of expelling heat and swelling as well as improving bowel function.

Winter gourd tea can be very sweet, and the first step is to make a concentrated winter gourd syrup by stewing the peeled and sliced vegetable with lots of brown sugar and water over a low heat. The entire process can take three hours, and the concentrate can be sealed and stored for a longer time.

The seeds of the winter gourd are usually added into the tea, and it’s better to choose the gourds with “white frost” on the skin, which soften more quickly. Apart from brown sugar, rock sugar also works in the recipe. Some people would also add ingredients such as ginger into the beverage to boost the health benefits.

When serving winter gourd tea, simply add water and stir well. The drink is best served over ice as well to balance the sweet flavor, but it can also be served hot in colder months. 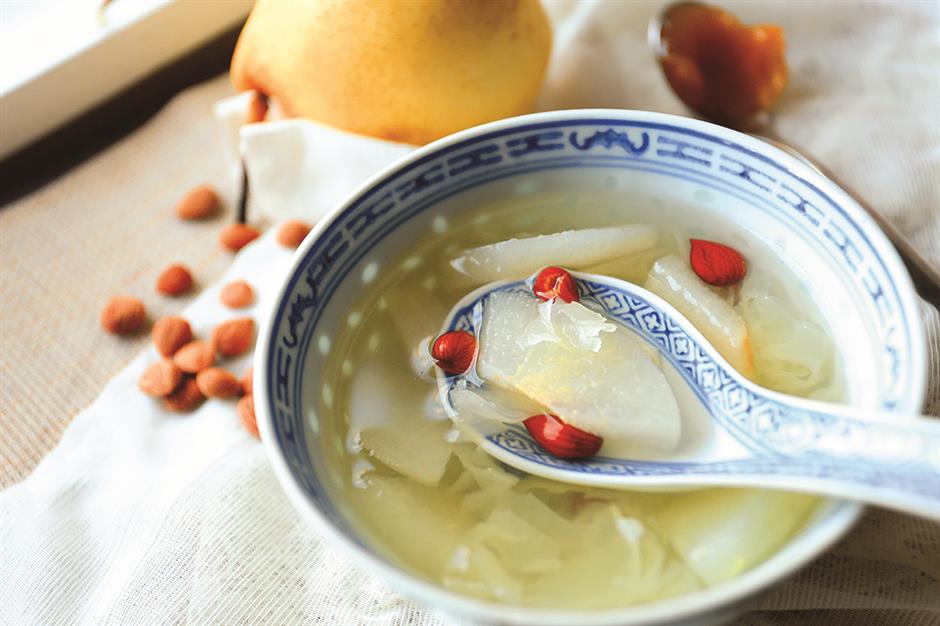 Pear soup with white fungus is known for its property of reliving throat discomfort.

Another traditional Beijing-style drink is xiaodiaolitang, which translates into “small hanging pear soup.” In Chinese culinary culture, the pear is regarded as a very beneficial fruit to hydrate the body, provide vitamins and nourish the lungs, as well as promoting gut health and boosting the heart.

Pear soup is often used to relieve throat discomfort and coughing, stewing the fresh, juicy large pears with skin on, and seasoning with rock sugar. A secret ingredient to elevate the flavor of the pear soup is a couple of preserved plums, which add a hint of sourness and saltiness to make the soup more refreshing.

White fungus and goji berries can also be incorporated into the pear soup for improved textures, flavors and medicinal benefits. When making the soup, add enough water at the beginning to avoid refilling water later which would dilute the taste.

A classic pairing for pear is monk fruit, or luohanguo, which is a very sweet Chinese herb known for properties of soothing a cough and toning the lungs.

Bamboo cane and couchgrass root drink is a classic Cantonese-style liangcha (herbal tea) recipe. Bamboo cane is the green-skinned cane that looks like bamboo, known for its hard skin and pure juice.

The drink is popular in spring and summer, with additional ingredients such as water chestnut, chunks of fresh carrot and candied winter gourd to boost the flavor and texture. No additional sugar is required as the ingredients are already quite sweet.

Job’s tears, a cereal that’s commonly used in making congee, is also a classic ingredient in Chinese beverages. The plain Job’s tears water made by boiling the soaked cereals is a mild, tasty drink known for the property of dispelling dampness from the body. It can be flavored with fresh lemon slices and served with ice in summer.

On the sweeter side, five-red soup, or wuhongtang, is a TCM drink recipe incorporating five red-colored ingredients: jujube, goji berries, brown sugar (known as hongtang or red sugar in Chinese), red beans and red-skinned peanuts. The drink is quite tasty and known for its property of replenishing the blood. 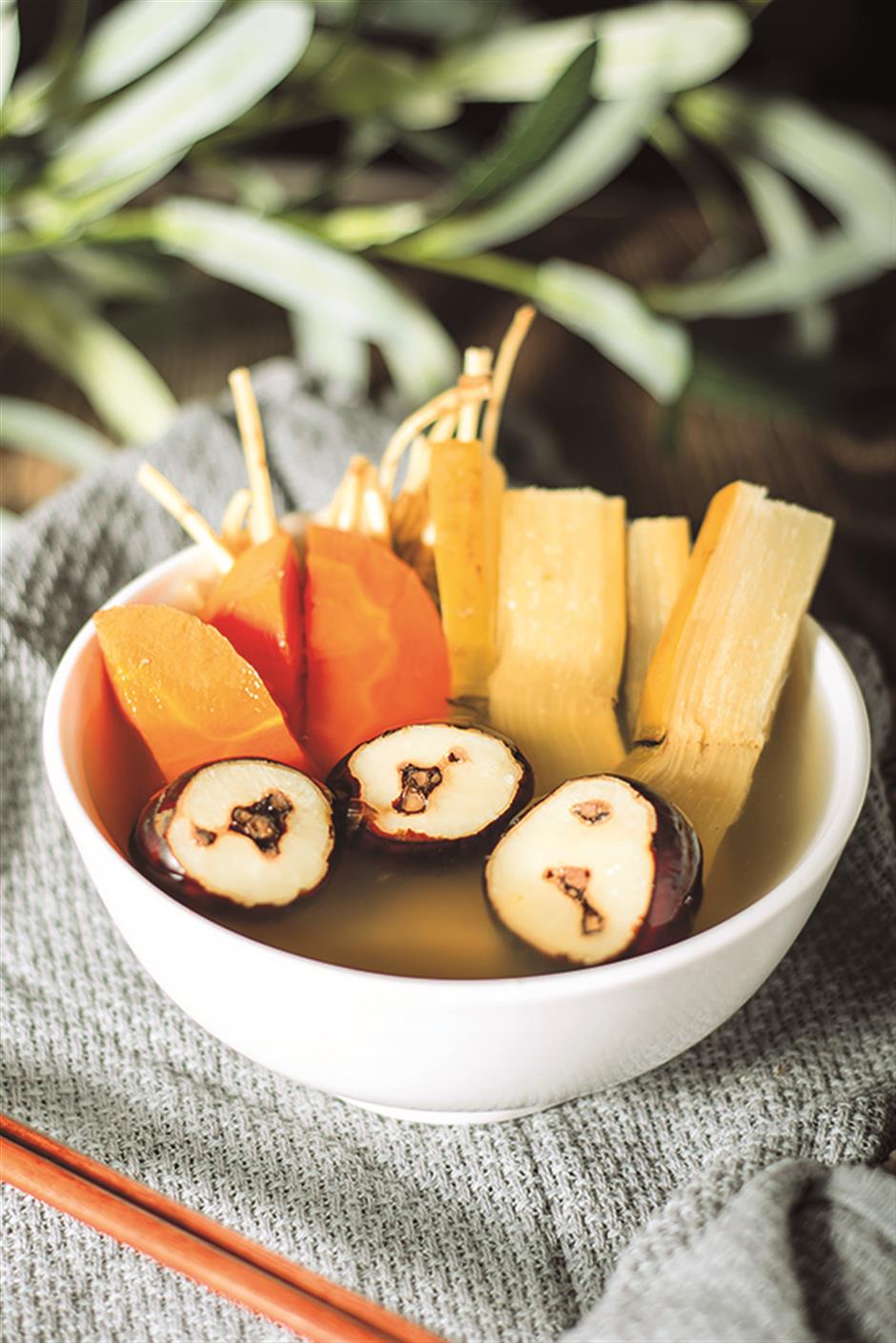 Bamboo cane and couchgrass root drink is a sweet beverage.