Discover many ways with duck: duck delights everywhere you look

Duck cuisine is an icon of Chinese culinary culture, transcending boundaries of tastes to bring dishes that everyone loves to the bone.

Peking roasted duck needs no further introduction as one of the most representative Chinese dishes. But across China, there are numerous duck cuisines and delicacies waiting to be discovered.

Nanjing is known as the capital of duck cuisine, and there are two local duck specialties, salted duck and roasted duck.

Salted duck is served cold, and making salted duck starts with a curing process by rubbing the inside and outside of the bird with stir-fried salt, a common ratio is about 45 grams of salt for each kilo of duck.

Next, the fowl is marinated in a brine of rich spices for several hours so that the flavor can reach deep inside the bones. It’s then cooked in boiling water seasoned with ginger, scallions and spices before cooling to room temperature and serving in fine cuts that can be easily picked up with chopsticks.

Though salted duck is enjoyed year-round, traditionally it’s a dish for the osmanthus flower season in the fall, so sometimes it’s also called osmanthus duck.

Nanjing-style roasted duck is different from its Beijing counterpart. An ideal duck needs to have crispy skin, soft meat without grease, and the most important part is not even the duck, but a small packet of marinade sauce that comes with it.

The flavor of Nanjing-style roasted duck is savory with a hint of sweetness, and the meat is extra juicy. Some people enjoy topping a bowl of steamed rice with the rich marinade sauce.

A preserved duck delicacy also from Nanjing is banya, or “flat duck,” a pressed and salted duck which originated in the Six Dynasties period (AD 222-589) and became popular during the Ming Dynasty (1368-1644). Fresh ducks are cleaned and cured in salt plus a special brine before steamed and then dried in the open air. It’s served by soaking the duck in water to remove the extra salt on the surface as well as softening the texture before steaming whole. 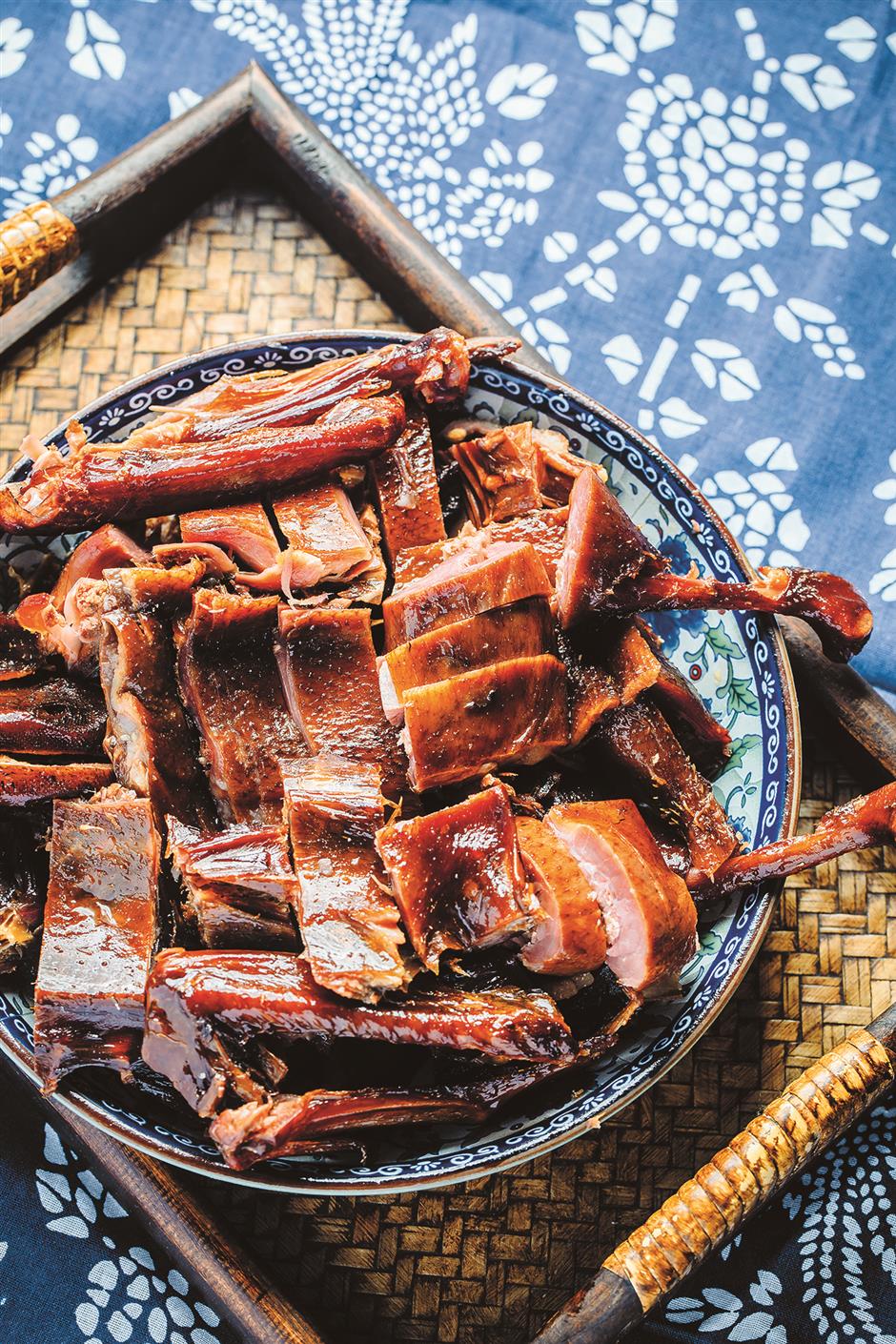 Meanwhile, in Sichuan cuisine there’s a traditional dish called Taibai duck, which originated with the Tang Dynasty (AD 618-907) poet Li Bai. It’s said that Li received orders from Emperor Xuanzong to work in the Hanlin Academy (royal academic and administrative institution), but was undervalued by politicians. To defend his name and position, Li cooked a delicious duck dish from Sichuan and offered it to the emperor, who was very impressed.

Taibai duck is prepared by steaming the duck with yellow rice wine and goji berries alongside other Chinese herbs, a rich yet light-flavored soup with nourishing properties.

Another Sichuan-style duck soup that’s more well-known is duck soup with pickled sour radish, which stews the rich duck with white radish, bamboo shoots and shitake mushrooms, while the pickled white radish lights up the rich flavors. The soup can also be used as a base broth for hotpot.

After a whole duck is cleaned and scalded in boiling water, it’s rubbed with a mixture of soy sauce, rice wine, sugar and more for a glistening brown color, and stuffed with the glutinous rice with all other ingredients that have been cut into tiny pieces. The whole stuffed duck is then steamed to cook fully until the meat easily falls off the bones, and the dish is finished off with a sauce for extra gloss and flavor.

In Huaiyang cuisine, there’s a centerpiece dish only veteran chefs can prepare — santaoya, a dish that wraps a pigeon inside a mallard that’s then stuffed inside a Gaoyou duck. The three birds are all deboned without breaking the skin, meat and shape. 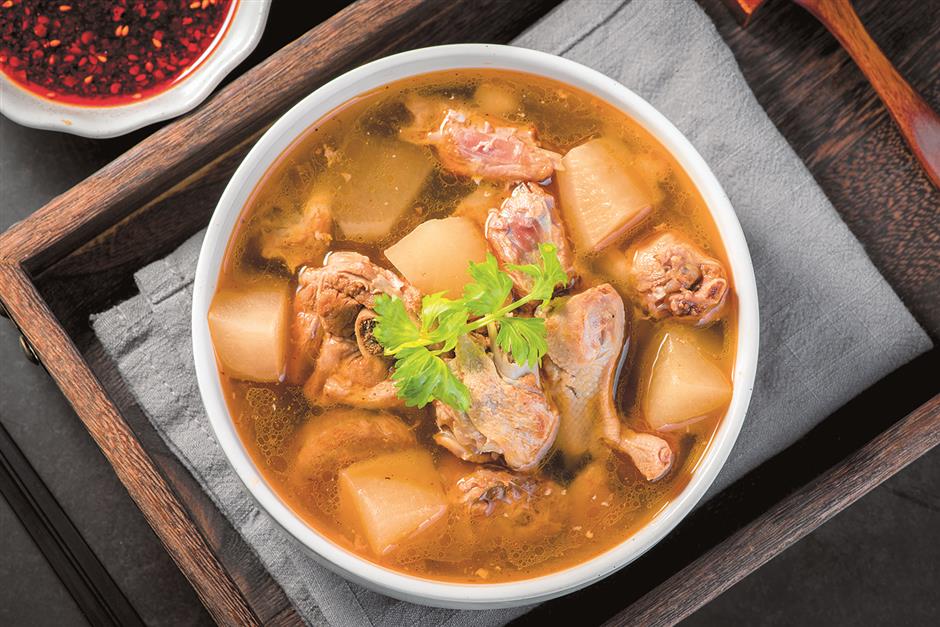 The succulent ducks are used in a wide variety of Chinese recipes, from cold dishes, stir-fries to soups and stews.

The Gaoyou duck is one of the three most iconic Chinese ducks from Gaoyou, Jiangsu Province. The duck produces both high-quality meat and eggs, with a mature duck reaching 2.5-4kg in weight.

The salted duck eggs made with Gaoyou duck eggs are considered the best. The eggs are large and often have bright red yolks so rich that oil can drip down. Salted duck eggs are made by marinating fresh eggs in brine. There are different methods, such as with wine, flour batter or sand, and the brined eggs are boiled or steamed before eating.

Salted duck egg yolk has been a crowd favorite ingredient for many years, and products containing salted egg yolks often attract long lines. Recipes such as salted yolk with pumpkin and Cantonese-style creamy custard buns are very popular across China.

All parts of the duck, from head to feet, from tongue to gizzard, are used in making favorite savory snacks. Chinese people consume an enormous quantity of duck offal, as these less meaty parts are perfect for braising in spiced stock and served as a snack to nibble while watching TV.

The most expensive braised duck snack is duck tongue, which is very tender and flavorful. But be aware, the spicy and salty braised duck goods from popular brands such as Zhou Hei Ya actually contain more sugar than people think, and with the already high level of sodium from the brine, moderate consumption is recommended.

Duck intestines are usually cooked in spicy hotpots, they have a crunchy texture when cooked correctly — less than 30 seconds in boiling broth. The duck intestines are cheaper than goose intestines, and can also be stir-fried with lots of chilis, ginger, garlic and scallions to accompany rice.

With ducks, not a drop of blood is wasted in Chinese cooking. Duck blood tofu is the most popular and common blood tofu in the nation’s cuisines, as the solidified blood has the same silky texture as soft tofu. Duck blood tofu is also considered to be cleaner than varieties made of pig, chicken or goat blood.

Salt is added to the fresh blood, then it’s set aside for half an hour before placing in a container in warm water at a temperature of 75 degrees Celsius. The blood tofu has no distinct smell or taste, and it can be made into soups, stews, stir-fries and cooked in hotpots.

Duck blood tofu is the star in iconic dishes such as maoxuewang (a spicy stew of beef tripe, pork meat, eel, soybean sprouts, shrimp, luncheon meat and more) and duck blood and vermicelli soup, which is a popular street food in Nanjing that features duck offal of liver, intestines, heart and gizzard as well as duck blood tofu in a delicious broth made from duck bones. 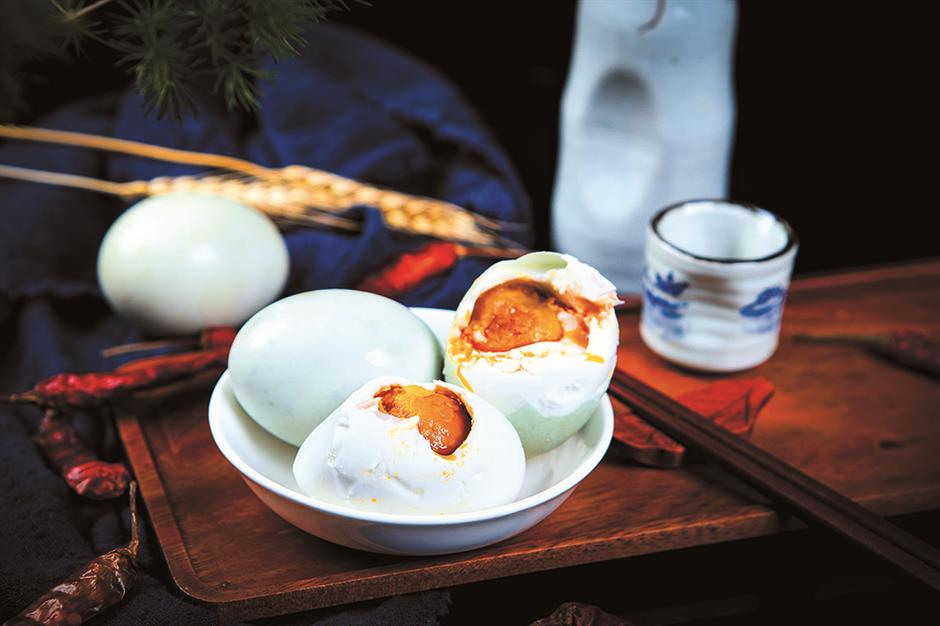 Salted duck eggs are one of the most popular ingredients in cooking and snacks.