Shunde, an affluent district in the city of Foshan, is tiny in its scale but mighty for its culinary scene.

In 2014, UNESCO announced that Shunde has become a member to the UNESCO Global Creative City Network and won the title of “City of Gastronomy”  — the second in China after Chengdu in southwestern Sichuan Province.

The world recognition and the unique local identity has piqued the interest of foodies making excursions to this particular destination, in central Guangdong Province and an hour’s drive from Guangzhou.

Shunde is one of the cradles of the world-famous Cantonese cuisine and the hometown of many skilled Cantonese cooks. Situated in the Pearl River Delta, Shunde, also known as Shun Tak, is blessed with a rich variety of freshwater fish. 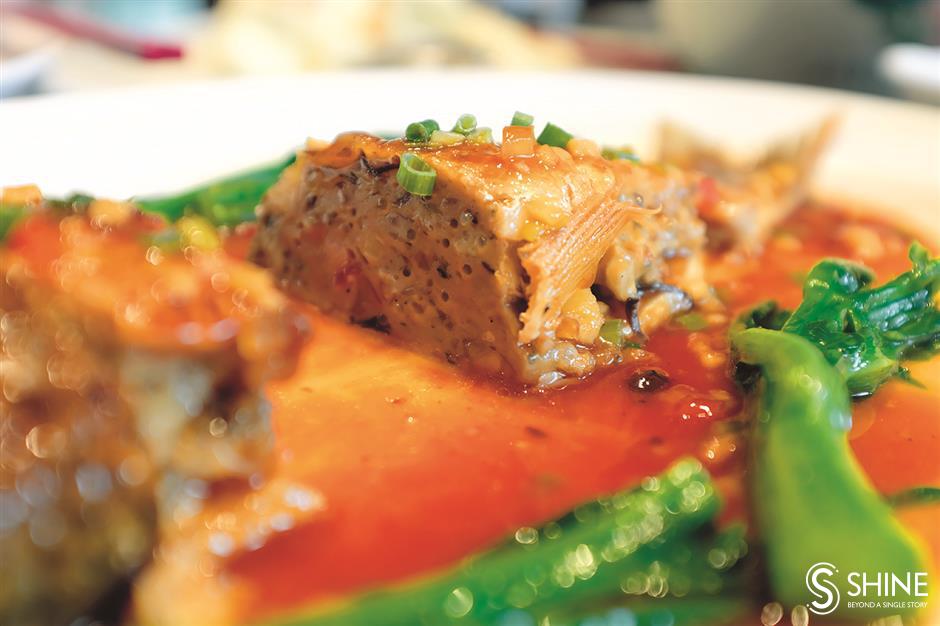 The stuffed dice is a complicated dish that requires intensive work

Historically, its unique agricultural ecosystem has provided the locals with fresh local produce and inspirations for fine cooking recipes and techniques.

Yusheng, yea sang or prosperity toss, is a well-known dish in Singapore and Malaysia which is a new year requisite because of both its name and how it is served. The original version comes from Shunde and as a signature dish for the region, Shunde yusheng (raw fish) calls for fresh Chinese mud carp. The condiments were a colorful array of thinly sliced pickles, onions, garlic, dried tangerine peel, lime leaves, peanuts, sesame seeds and crispy fried vermicelli. Unlike the sweet-sour Southeast Asian version, the traditional yusheng is dressed with peanut oil and premium soy sauce. It features a light and savory flavor. One can also add in some fish skin for crunchiness in the raw fish salad.

Mud carp and grass carp are common ingredients in Shunde cuisine, ranging from the raw fish salad to fish soup, fish congee to delicious steamed fish. One notable dish, also a classic recipe, I’ve tasted in Guo Ran Ju (a famous local restaurant) is the stuffed dace — a complicated dish that not many restaurants today bother to make. 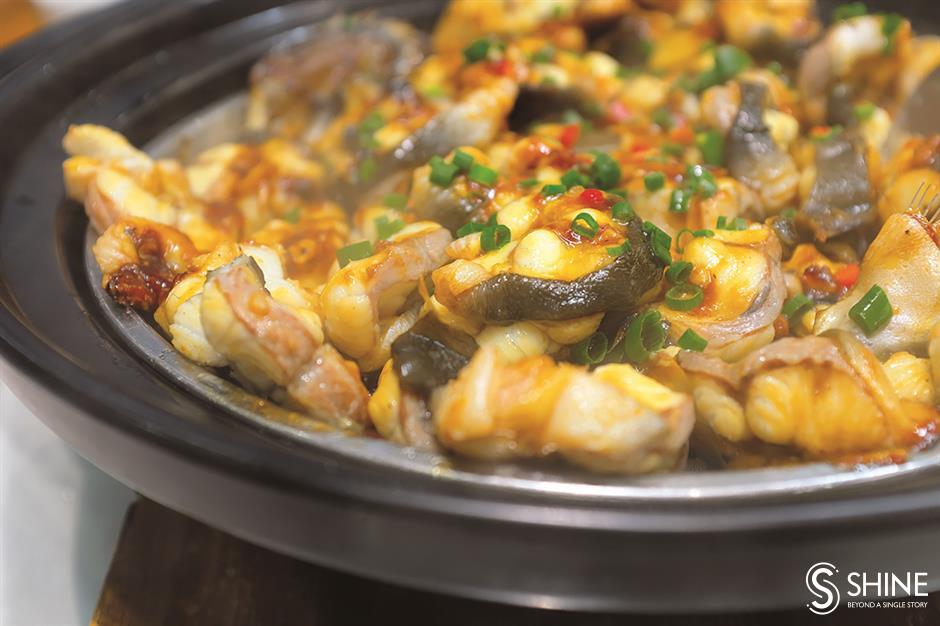 This fish dish requires intensive work. The chef first de-constructs the fish, separating the skin, head, tail and fins with care to ensure all remain intact. They later scrape the flesh off the bones, and chop it into a paste. Vermicelli, diced cured sausage, carrots, mushrooms and water chestnuts are mixed in and the mixture is stuffed into the fish skin, the head and tail, arranged so it looks like a whole fish.

The culinary practice of not wasting a single part of any ingredient is commonplace among the Cantonese and the rule applies even to the less desirable parts of vegetables or fruits, such as the spongy outer skin of a pomelo. Local chefs are known to braise their leftover pomelo peel to create dishes that are high in fibre and nutritional value. To enhance its taste, shrimp roe are used to sprinkle the pomelo pith. In the dish together with braised eel, the gourd-like texture of the pomelo pith holds the flavors well. 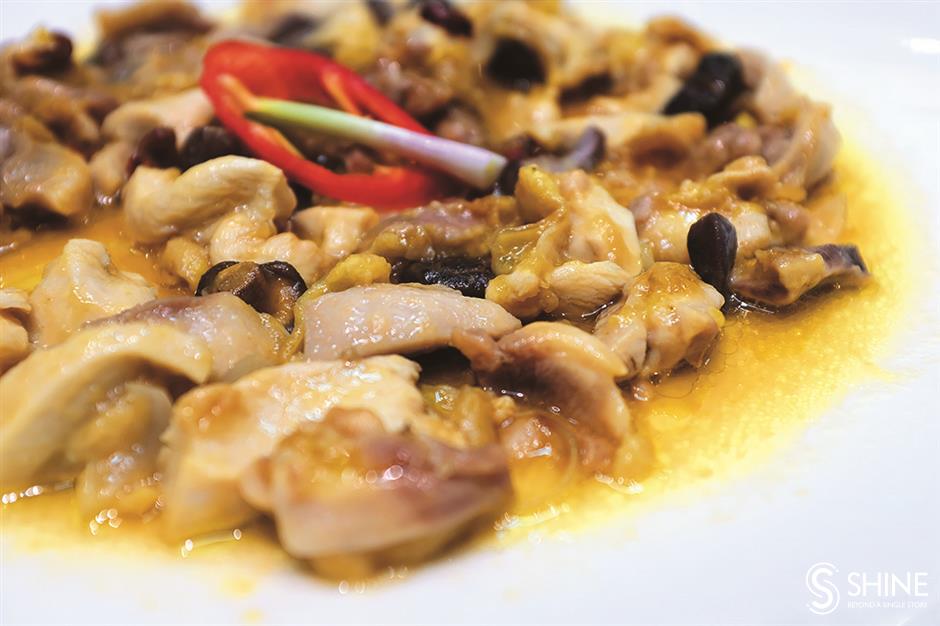 Steamed chicken is a signature recipe at restuarant Yi He Ya Ju.

Many dishes in Shunde are prepared in a clay pot because locals like food served piping hot. Clayware is perfect at preserving heat and sealing flavors, which is particularly important for cooking fish. The clay pot eel is another great way to taste the eel meat. Hot stones are used underneath to keep the temperature high to seal in the flavors.

The fried milk, which is a signature of the Daliang district, uses the specific type of milk shui niu nai (water buffalo milk) that is considered the best for achieving velvety results. Pan-frying the milk requires precise control of temperature and cooking time. The chef smears a dab of oil evenly over the wok, pours in a well-blended milk and egg white mixture and gently push fries it. The timing is extremely important and it’s not easy to find this dish outside Shunde. 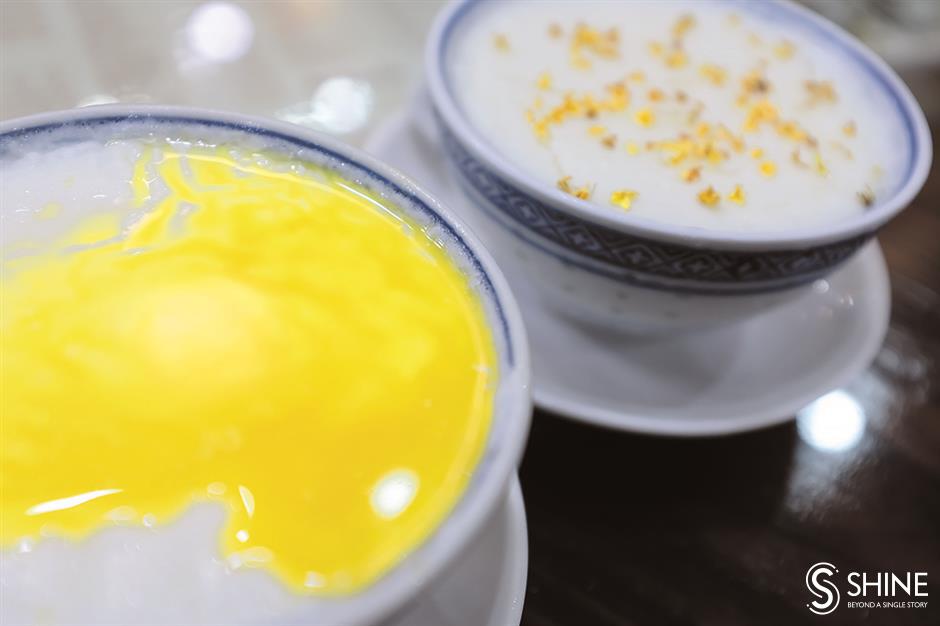 Chencun rice noodles originate from Chencun town, which is located in Shunde. It is a thin, fresh, soft kind of rice noodle, known for being exceptionally tender and smooth in texture. They can be steamed just to enjoy its original taste, or tossed, and prepared with pork, ribs or shrimp.

For desserts, Shunde double-layer milk custard, also known as double-skin milk, is a classic. Made of buffalo milk, egg whites and sugar, it is a velvety smooth milk custard somewhat resembling panna cotta. However, there are other kinds of milk desserts that are equally delicious because of the buffalo milk is used. It has higher fat content compared to cow’s milk thus producing a smooth texture and a richer taste.

Where to eat in Shunde

Yi He Ya Ju