It's time for Taihu Lake shrimp of Jiangnan area 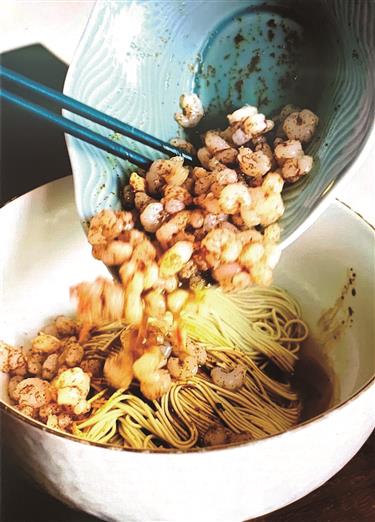 Shrimps in neighboring Taihu Lake start spawning around the Dragon Boat Festival in mid-June each year.

About a month later comes the season of dining on shrimp noodle in the Jiangnan area (the area south of the Yangtze River, which includes Shanghai).

Chefs buy fresh shrimp, clean them repeatedly in water to filter the spawn, then remove the meat from the shells and pick the brains out.

They fry the three parts with a little oil and famous dark Shaoxing rice wine. Those ingredients are then covered on a plate of boiled longxu, or dragon whicker, noodles – a traditional banquet noodle symbolizing longevity.

The white shrimp meat, the red and dazzling brain, and the thickly-dotted spawn spread upon the noodle like pearl and coral.

Since water dilutes the flavor of the shrimp, the noodles are directly mixed with the three shrimp components without added extra soup.

Some diners even feel reluctant to add any spring onions into the noodle, for fear that this will change the flavor. Shredded ginger and vinegar can be added to enhance the flavor instead.