The sour and spicy splendor of Guizhou food

Guizhou is a popular destination for travel these days despite its relatively poor infrastructure. It's home to a string of Chinese ethnic minorities, exotic cultural traditions, beautiful karst landscapes and distinctive cuisine.

Guizhou cuisine is commonly known as sour and spicy, different from its neighboring Sichuan province, which is famous for numb and spicy food.

Its culinary culture is firmly rooted in home-style cooking and bustling late-night street markets. The food is also punctuated by fermented ingredients. Fermentation was used to prolong the shelflife of food in areas that lacked refrigeration.

A trip to Guizhou helps one discover and understand more about the local food traditions.

The provincial capital Guiyang is usually the first stop for exploring the surrounding sights in the region, and the ideal base to try out a variety of local snacks. 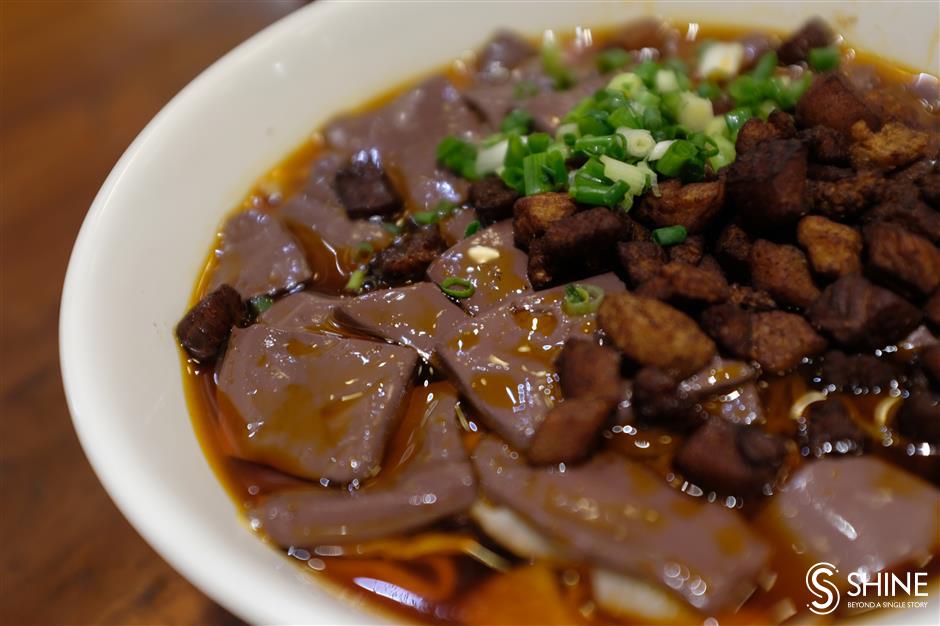 Siwawa, which literally means "silk doll," is probably the most well known. The name comes from its appearance, like an infant swaddled in cloth. In fact, it comes with a platter of thin shreds of different vegetables wrapped in rice flour pancakes as thin as a piece of paper.

One takes a piece of pancake to wrap up the mixture of vegetable shreds, including cucumber, kelp, radish, bean sprouts, houttuniya and fried soybeans and then dips it in a spicy sauce known as zhanshui.

Another must-try in the city is changwangmian (changwang noodle), which dates back more than 100 years. A typical morning in Guiyang should start with a bowl of changwang noodles – the name implies auspiciousness. The noodles are a bit chewy due to the large amount of eggs used with the wheat flour. The noodle soup is cooked with two main ingredients: chang (pork intestine) and wang (pork blood curd). Locals love to add cuishao (deep-fried pork dices), refreshing pickles and surely soy sauce, vinegar and roasted chili condiments that provide extra taste and texture. changwang noodle spots can be seen all over Guiyang, but the most famous is probably Nan Men Kou Chang Wang Noodles on Xiahuguo Road. The street has many local snack shops, and most are always packed. 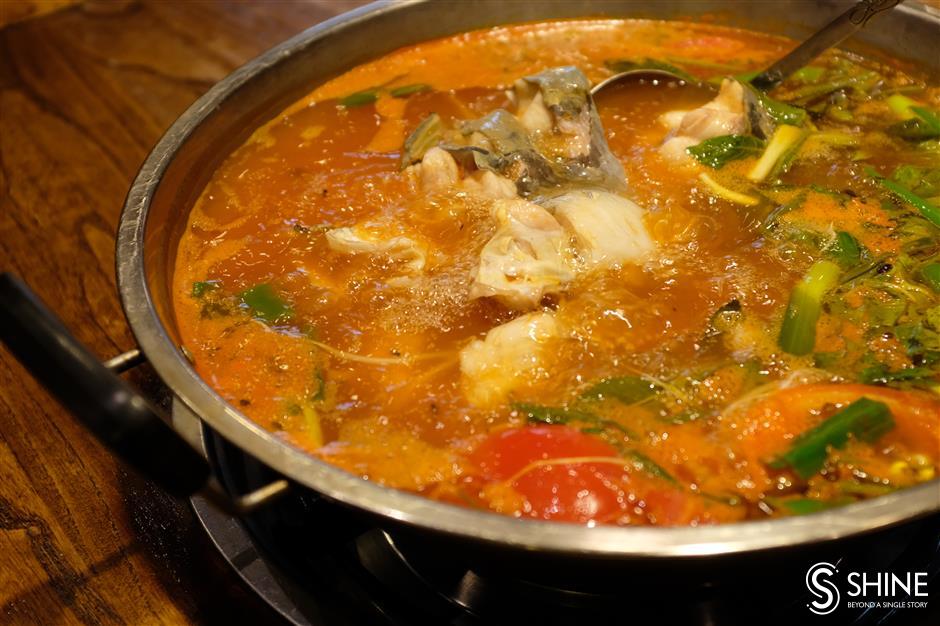 My trip continued with the second stop in Kaili, a city famous for its suantangyu, or sour soup fish. The sour soup fish is traditionally a Miao (minority) delicacy and Guizhou's most famous dish. It also proves the fermented, sour things are the driving force of the local food.

The sour soup fish is river fish farmed in rice terraces, boiled in a simple-yet -uniquely-sour hot pot of pickled chili, spring onions and tomatoes. It is served on a burner so the sour taste continue to develop during the meal and easily stimulate people's appetites.

Liang Huang Zhai is one of the most famous sour fish soup restaurants in Kaili. It uses the meaty carp for the sour soup hotpot, and one can order different vegetables to boil inside the tasty soup. The dipping sauce is especially delicious – a mixture of chili powder, spring onions, shallots and other condiments with a spoonful of hot sour soup mixed in, which gives the fish an additional burst of flavors. 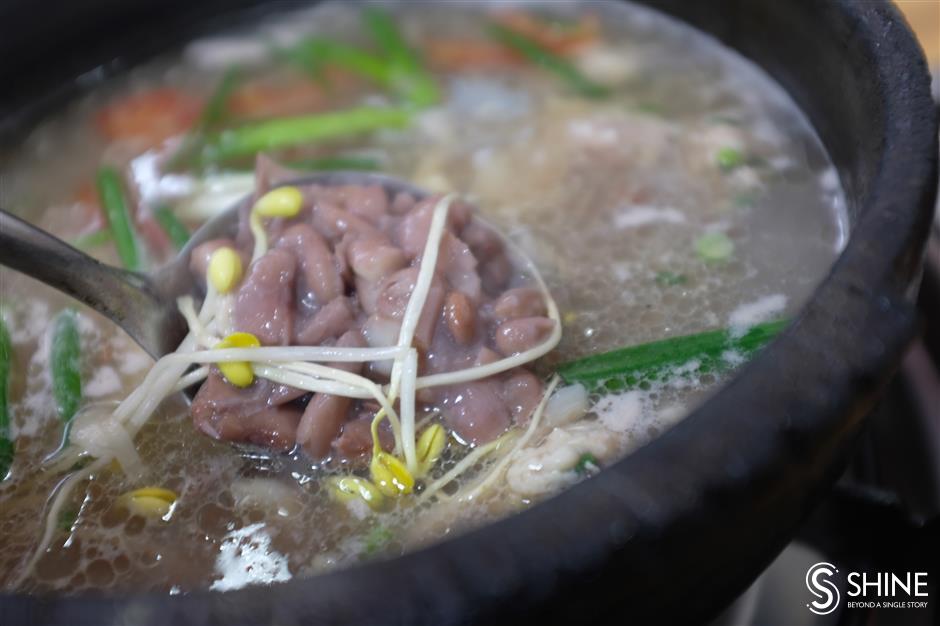 Another hotpot restaurant I loved is doumi (kidney bean) hotpot. I tried this special hotpot near Libo scenic area on the southern edge of Guizhou.

Red kidney beans are the main ingredient inside the hotpot soup, which are boiled for hours until they are extremely soft and tender.

After boiling, the bean skins are no longer noticeable. Unlike sour spicy fish soup, doumi hotpot is devoid of spices, ideal for those who prefer original flavors.

One food item that should never be left out of a doumi hotpot experience is Ruan Shao (diced pork fried in sauce until no longer oily). Locals love to add the hotpot ruanshao, meatballs, and different kinds of vegetables unique to the region.

The dipping sauce is a mixture of spices and condiments plus houttuniya (fish mint), the regional root vegetable that smells fishy but is used in many local dishes and gives a distinctive sour-peppery flavor. 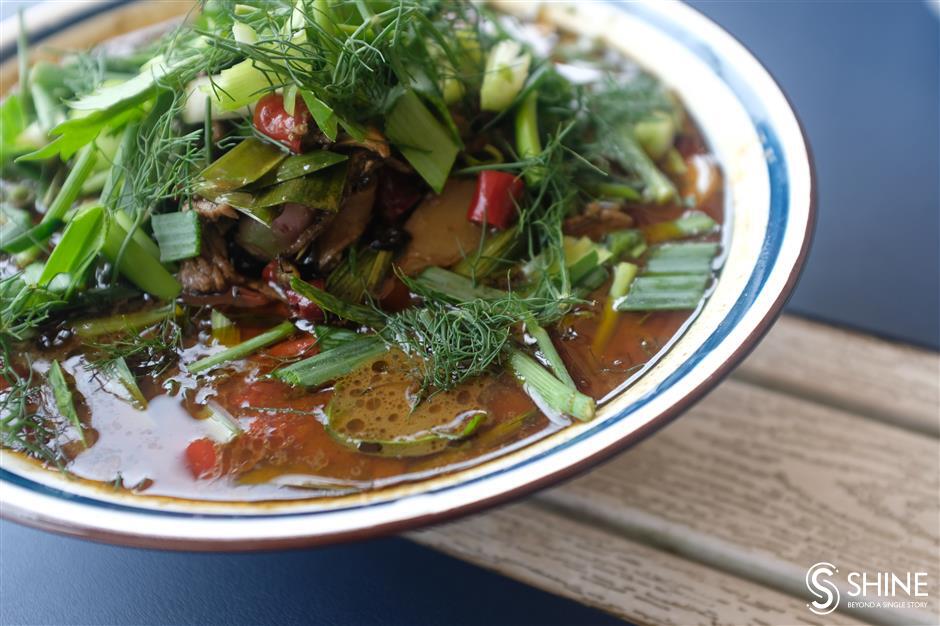 Traveling further to Miao and Dong villages reveals more regional recipes along the way. One special food is niu bie, a typical dish of the Dong ethnic group in southeast Guizhou. It is made from partially digested food found in a cow's rumen, the largest chamber in its stomach. Fine grass and herbs are fed to cattle before they are slaughtered. The undigested food in the stomach is removed and a green liquid (cow cud) is squeezed out of it.

Herbs and condiments are then added to the mix, which are then boiled into a soup that is popular with many people in the province. If you are willing to try, it actually tastes bitter at first and then a little bit sweet.

﻿
Special Reports
﻿
The sour and spicy splendor of Guizhou food
Summer feast of goat meat runs through October in Songjiang
It's time for Taihu Lake shrimp of Jiangnan area
Korean barbecue with a focus on everything pork
Beautiful and delicious lotus: culinary splendor of lotus plant
Cool noodles to beat the heat: chilled delicacies ideal for hot days
Learning to love eating fish with eyes intact
Thai paradise brings in a touch of France
A range of cuisine to tempt your taste buds
Refresh tired taste buds with summer treats
EXPLORE SHINE