The color black is where it's at: more to black food than meets the eye

Enjoying foods with beautiful colors is a visually delightful experience – think about a slice of yellow-colored cake versus a slice of blue-colored cake.

Black isn't a color that's as appetizing as orange and green, but in Chinese culinary culture, some black foods are highly regarded for their flavor as well as nutritional value.

This week, we'll take a look at the most popular black-colored foods in China and how they help the body. 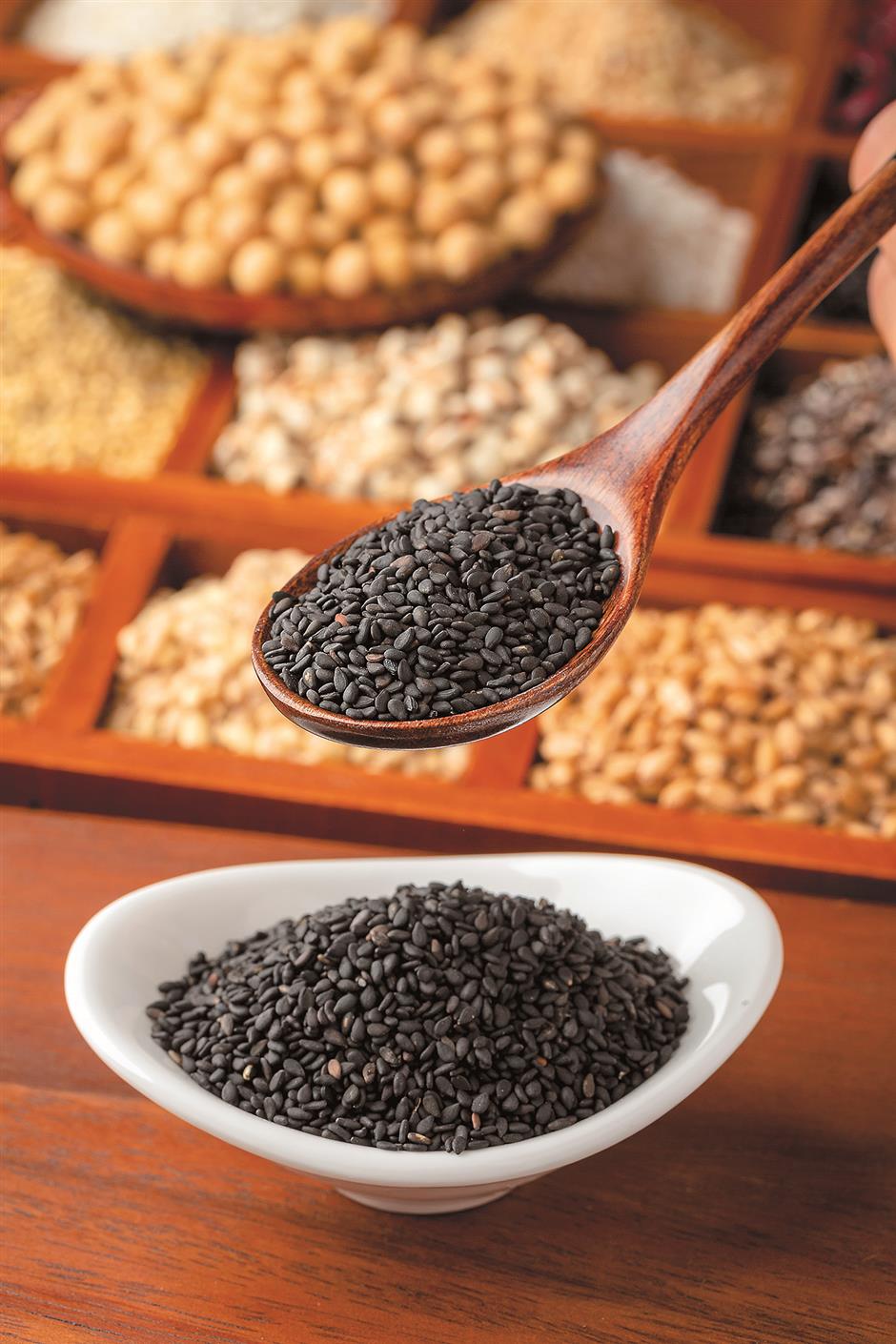 In traditional Chinese medicine (TCM), black sesame is known for its anti-aging properties, especially for nourishing the scalp and stimulating hair growth. It's unknown how well black sesame works in this matter, but numerous people are willing to give it a try and incorporate more black sesame in meals and snacks.

Compared to white sesame seeds, black sesame seeds have a nuttier flavor. The price of black sesame seeds is also slightly higher than their white counterpart. Toasted seeds are more aromatic than raw ones, which can be topped over cold salad dishes and stir-fries as a finishing touch.

Black sesame paste is a popular dessert and snack with thick texture. It's sold as a convenient powder to be prepared by simply adding boiling water and stirring until everything is smooth and blended.

Black sesame balls are an even more convenient alternative to black sesame paste for people looking to supplement their daily diets with a dose of black sesame. The black balls are quite large and individually packaged.

It's worth noting that both black sesame paste and black sesame balls contain added sugar to sweeten the taste, so moderate consumption is advised.

Black sesame is also among the most popular fillings for sweet pastries, cakes and desserts.

Grounded black sesame seeds mixed with lard is an iconic filling for tangyuan, or glutinous rice balls, the must-have dish for celebrating Lantern Festival. No doubt the recipe is a calorie bomb, as it's high in fat (from both the sesame seeds and lard) and sugar (added sugar to sweeten the filling and carbs from the glutinous rice wrapper), but it's difficult to say no to the gooey rice balls with runny filling.

With pastries, the filling needs to be drier and denser in texture. As the Mid-Autumn Festival is drawing near, black sesame is a classic mooncake flavor, especially popular with elders. Adding nuts or oats can elevate the filling. 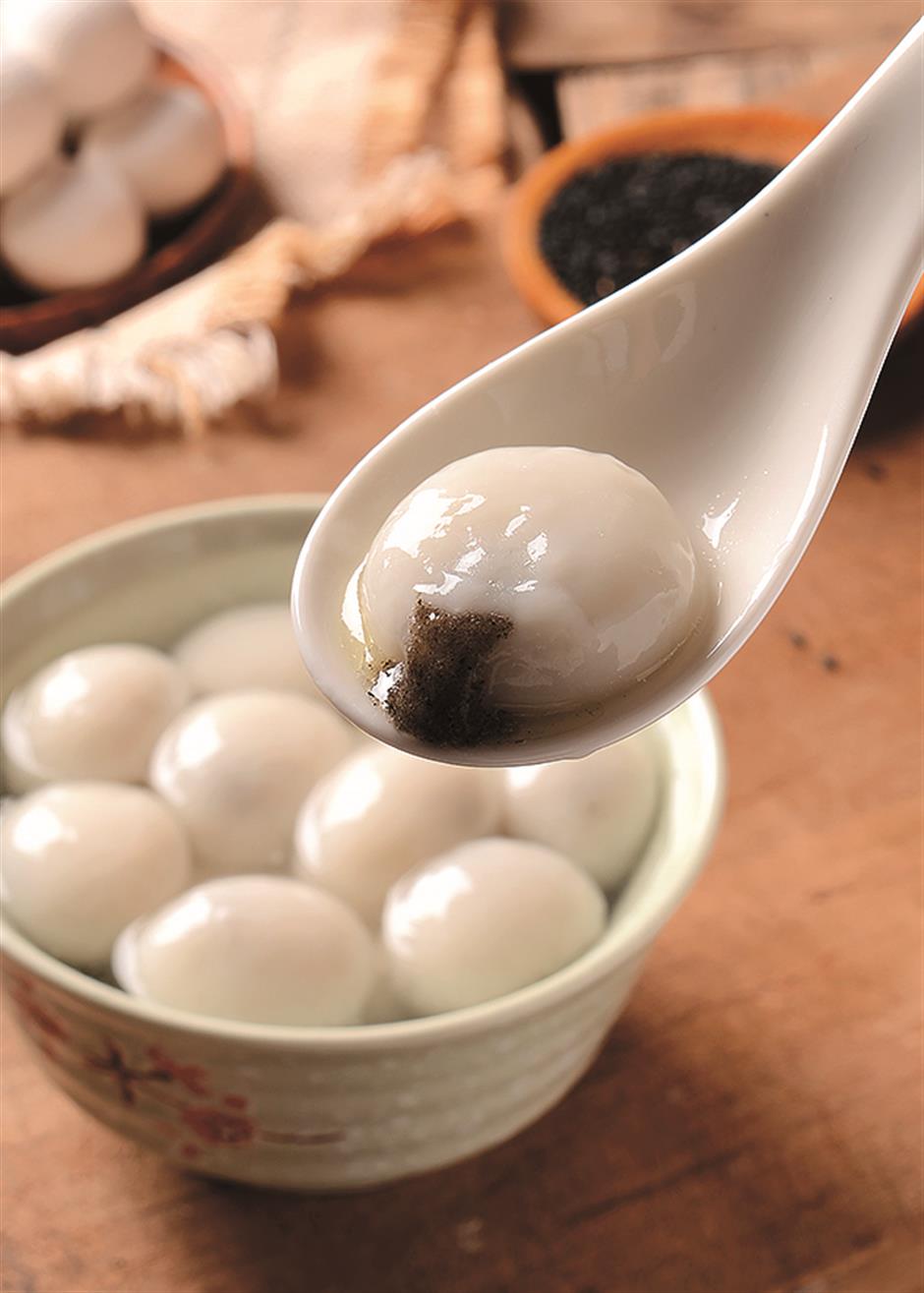 Black rice is hailed as the "black pearl" of rice. The coarse grain is known for its nutritional value, and is generally cooked as a congee with beans, oats and naturally sweet ingredients like jujube and goji berries.

The texture of black rice is harder than plain white rice, and it's quite al dente when cooked. Mixing black rice and other cereals with white rice makes for healthier rice with more fiber and nutrition.

There are two kinds of black rice cakes. One is a traditional steamed dessert made of black and glutinous rice flour and eggs, which has a spongy texture and mild, sweet flavor. The other is simply steaming the black rice with milk or coconut milk in cupcake molds with a lotus seed on top – a quick dessert that's often seen at banquet feasts.

Black beans are another popular food in TCM, with properties such as tonifying the kidney, strengthening and nourishing blood and brightening eyes.

Along with stewing in congees, black beans are soaked, blended and cooked to make black bean milk ­– the same as regular soy milk. For richer taste, the cereal milk can also include black sesame and black rice, with a few peanuts and some sugar to boost the richness and flavor.

Black bean tea is a Chinese beverage known for tonifying the kidney, and it's easy to make at home. The first step is to rinse and dry the black beans, then heat up a pan or wok and turn it down to low heat, add the beans and stir constantly until they start to pop and release their beany fragrance. The beans can be kept in a dry-sealed container, and making the tea is simply a matter of boiling or brewing it in hot water. 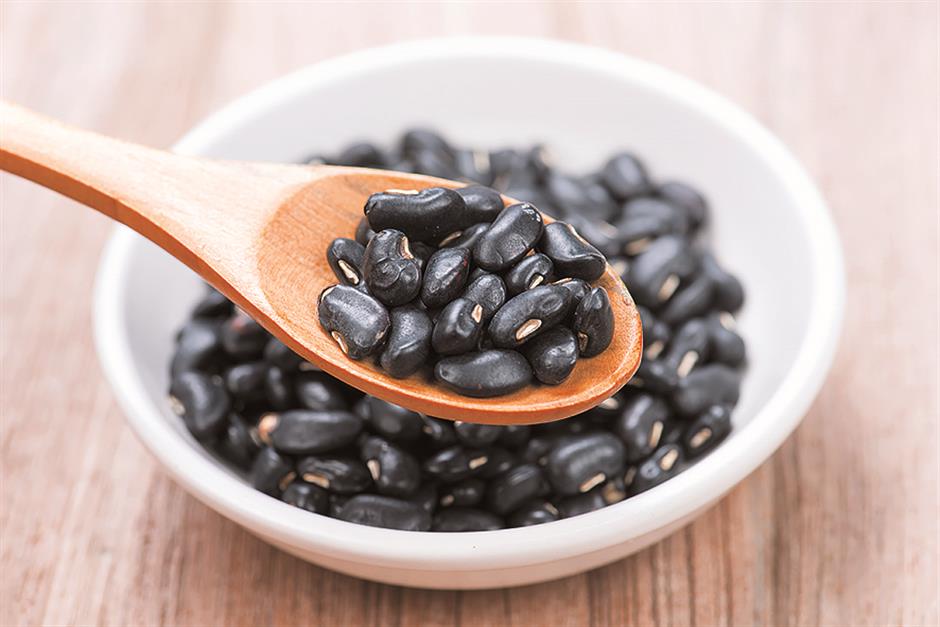 Wood ear mushrooms, also known as jelly ear, are a very popular and humble vegetable Chinese people cook and eat throughout the year.

They are commonly found in stir-fries (like with scrambled eggs), soups and even filling for buns and dumplings.

Wood ear mushrooms contain many vitamins and minerals, and have umami flavor with a unique crunchy texture. The mushrooms can be poached in water to make crunchy and refreshing salads, or made soft after stewing for a longer period of time.

Wood ear mushrooms are bought fresh or dry depending on availability. The fresh fungus is quite plump and can be cooked in quick recipes such as salads and stir-fries, while the dry fungus requires reconstituting in water to regain moisture and form. They are ideal for stewing in rich braised dishes with pork ribs, beef or chicken.

Working with wood ear mushroom can be tricky. They must be fresh and fully cooked, and cannot be soaked in water for too long. Leftovers must be discarded (especially with cold dishes); otherwise, they can cause immediate food poisoning that can be life-threatening.

For this reason, it's always safer to cook and eat them at home, and be extra cautious when buying ready-to-eat wood ear mushroom salads. 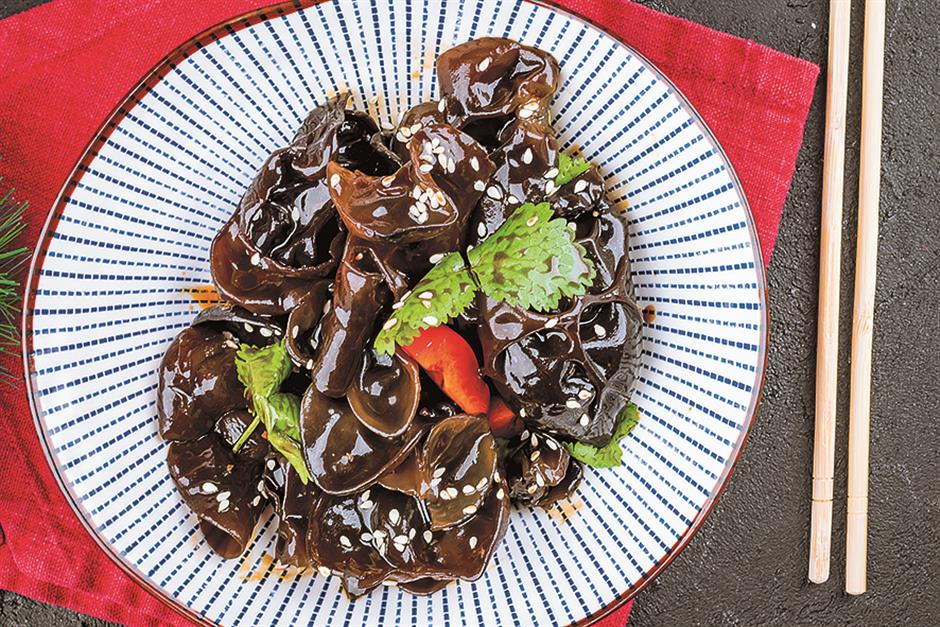 Goji berries have been trending worldwide among health fanatics as a superfood. They are native to China, mostly grown in the northwestern autonomous regions of Ningxia Hui and Xinjiang Uygur.

Red goji berries are used in soups, beverages and congee, or as a topping to eat directly.

Black goji berries are a more expensive variety, known for their powerful antioxidants, vitamins and anti-aging properties, and more nutritious than red goji berries. They're usually made into cold or hot drinks, alone or with other teas for more complex flavor.

When black goji berries are brewed in hot water, the result is a vibrant purple color with mild taste. 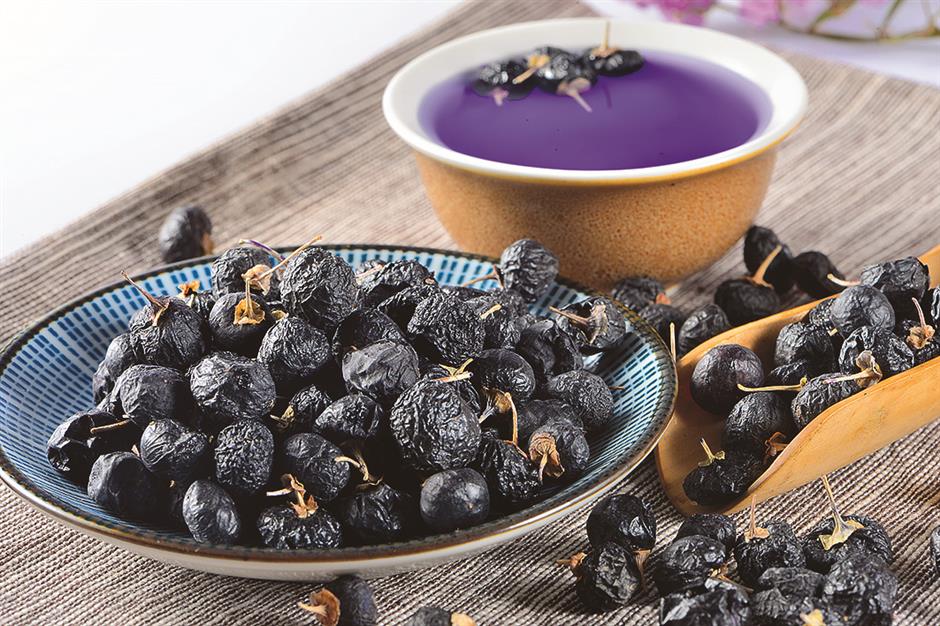 ﻿
Special Reports
﻿
The color black is where it's at: more to black food than meets the eye
A little pricey but worth it: the pure joy of gobbling down goose
Pastas are the stars at new Italian eatery
A modern take on traditional Taiwanese hotpot
Panino with passion along with a Puglia philosophy
Mediterranean cuisine with a wow factor
China's most comforting food: the flexible, delectable rice dish
French elegance, Japanese grills and traditional Cantonese delights
Azul Italiano: Mediterranean flair without leaving the Bund
Summer 'tis the season for plums:
EXPLORE SHINE