The flexible and delectable walnut: not just good, good for you

Walnuts are a healthy nut with numerous health benefits and recipes to create delicious dishes, desserts and snacks with ease.

Packed with protein, antioxidants and omega-3 fatty acids, walnuts are one of the most common nuts in Chinese cuisine in both savory and sweet cooking.

China is a major producer of walnuts, the majority of which are consumed domestically. It's both a food and herbal product with a long history.

In terms of traditional Chinese medicine, walnuts are considered to be warm in temperature with sweet flavor, benefiting the lungs, intestines and kidneys. What's more, they help expel phlegm and improve memory. 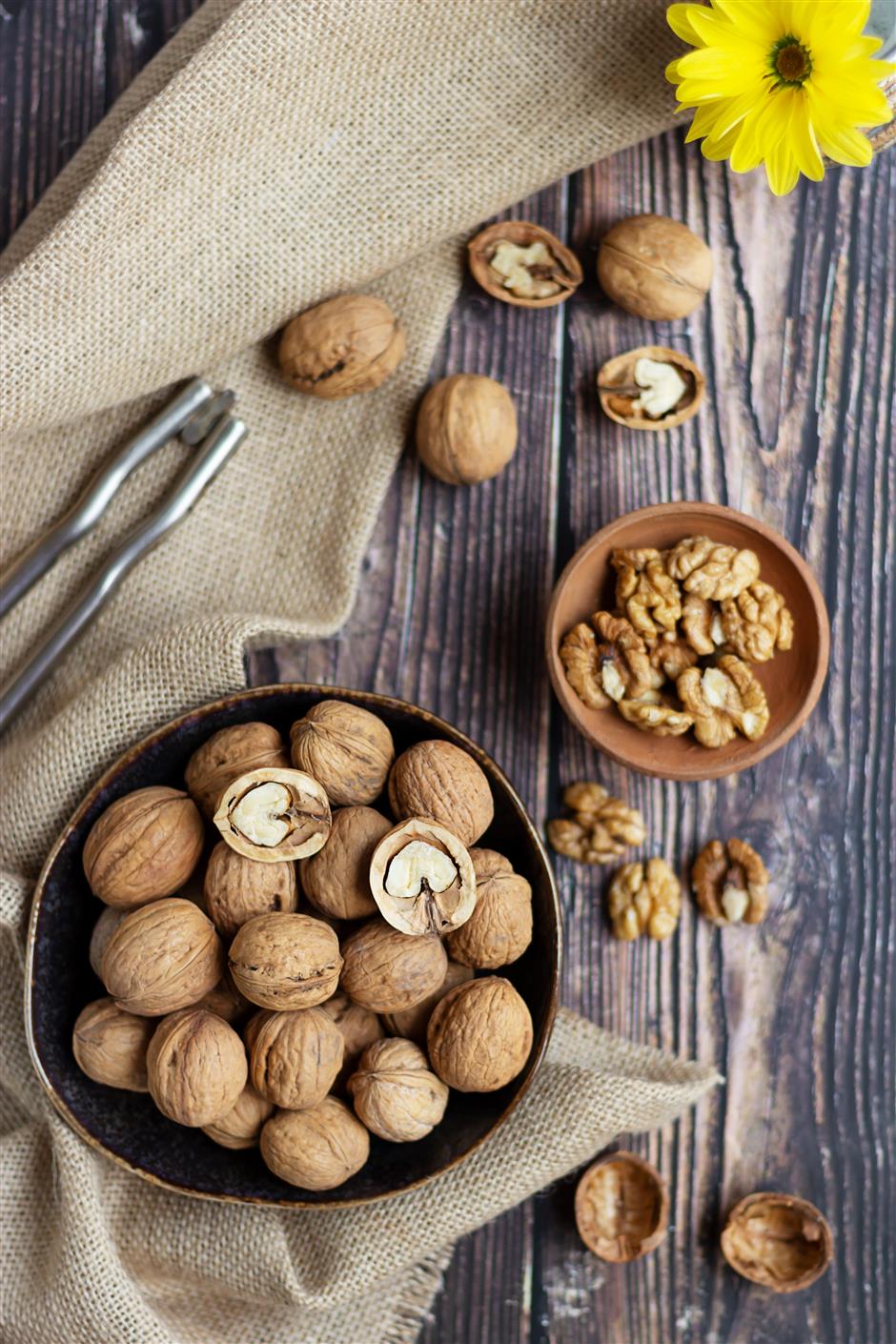 Walnuts are used in salads, stir-fries, beverages, desserts, candy and even as a traditional Chinese medicine herbal remedy.

Fresh walnuts are a fleeting delicacy with a loyal following, and early autumn is the best time to enjoy this gift from nature. They are a tender alternative to dried walnuts – sweet, moist and crunchy with a taste sensation more like a fruit or vegetable than a nut.

Fresh walnuts are sold in two forms – the complete walnut with a thick green skin that helps preserve it, and the skinless variety that's easier to process at home.

It's a great snack to nibble on during movie nights. After removing the green skin and cracking the hard shell, the membranes must also be peeled off. The texture of the membranes is quite different from the dried walnut – wet, soft and more elastic – opposed to the thinner membranes that stick tightly to the "meat" of the dried nut. Fresh walnut membranes aren't suitable for eating, due to the astringent taste and unpleasant texture.

Removing the membranes may be a tedious task and a bit rough on the fingernails, so a solution is to use tweezers to lift up the edges and pull them off.

Fresh walnuts are great in salads, tossed with poached wood ear mushrooms and a dressing made of minced garlic, soy sauce, vinegar and oyster sauce. They can also be used in stir-fries with crunchy vegetables like green peppers, carrots and yams.

Chinese fresh walnuts are mostly produced in Shaanxi and Sichuan provinces. You can find them in local supermarkets like Ole' and Hema Fresh, but they're much more expensive than buying in larger quantities directly from farmers and vendors on Taobao. A 750-gram bag of fresh walnuts without the green skin is about 20 yuan (US$3.06) at Hema Fresh, while a 1,500-gram bag from Qinling Mountains in Shaanxi is around 26 yuan on Taobao with shipping included. 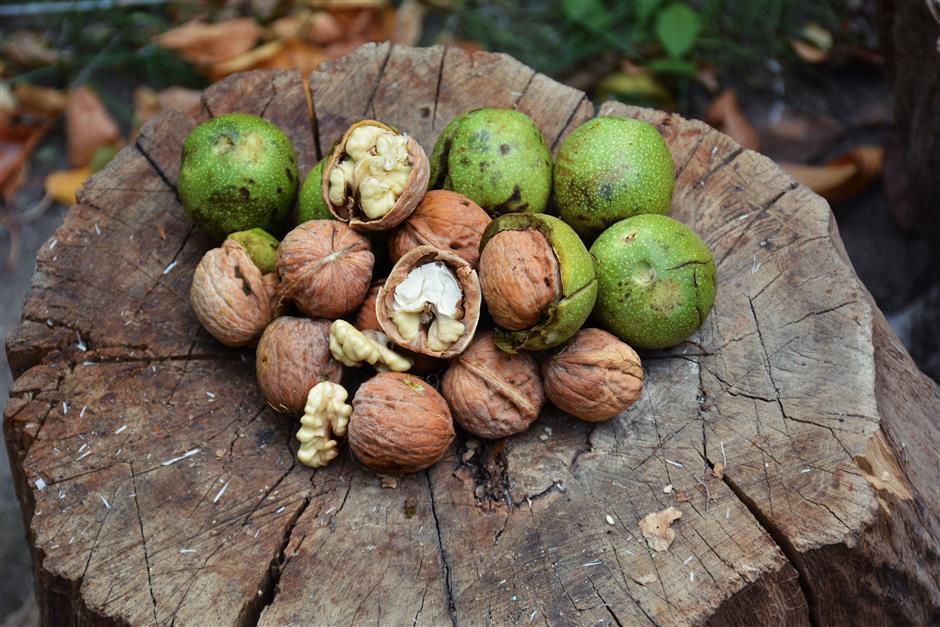 Fresh, unripe walnuts are a seasonal delicacy from late summer to early fall. They have a crunchy, refreshing and moist texture that's very different from dried walnuts. Fresh walnuts can be eaten directly or used in salads and stir-fries.

Amber walnuts, also called sugar-glazed walnuts, are one of the most popular nut snacks in China. To make them, toast the dried walnuts in a dry wok over low heat until the aroma comes out, which removes the bitter taste of the membranes. Remove the walnuts and in a clean wok, combine sugar and water (twice as much sugar as water) and bring it to boil over high heat, stirring non-stop until big bubbles appear. Then add the walnuts and coat them evenly with the thick sugar syrup.

Add white sesame seeds to accentuate the rich flavor. Immediately remove the walnuts from the wok, and spread them on baking paper with each individual kernel separated. After they cool down, they'll have a crunchy texture.

Sugar-coated dried walnuts are a much sweeter snack with a white sugar shell over the walnuts.

A savory alternative walnut snack is roasting the nuts with salt and pepper after boiling them in water for one minute, which can be done in a wok by constantly stirring or in an oven.

Walnuts and jujube candy cake is a maltose snack that mixes jujube paste with toasted walnuts, then stir-fried into a thick texture and cooled to make candy bars. A low-sugar option is walnut-stuffed jujubes, which is a two-ingredient snack without any additives.

The traditional Chinese pastry taosu, or walnut shortbread, is a flour, shortening and egg pastry that doesn't actually have any walnuts in it. 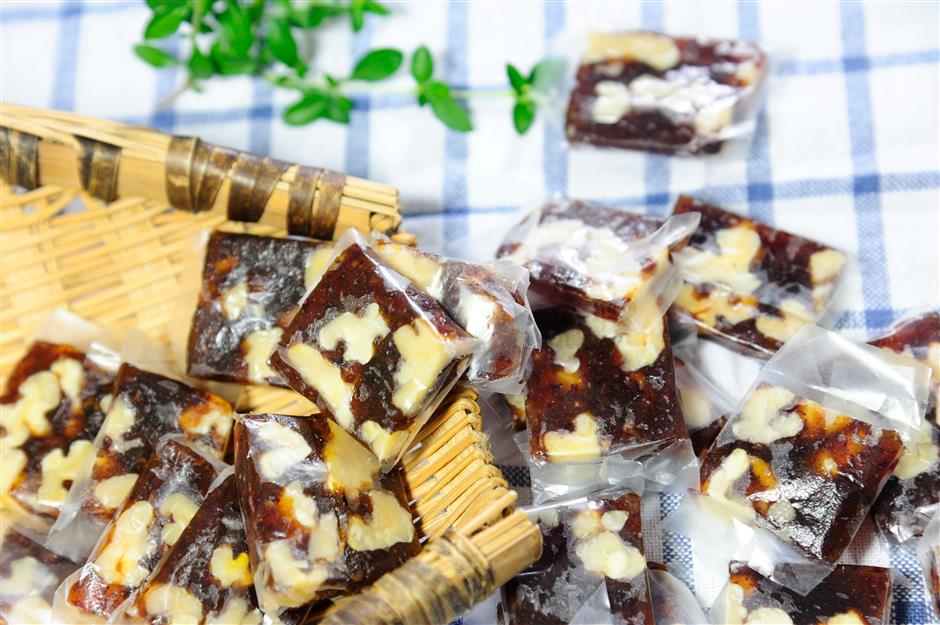 Xinjiang Uygur Autonomous Region is a key walnut production region, and the most famous variety are paper shell walnuts, named after their thin, crisp shell that can be cracked even by hand. Farmed in areas between 1,700 and 2,400 meters above sea level, the kernels can be easily removed, making them an ideal snack after roasting (which removes the raw nutty taste).

Walnut paste is a soupy dessert with thick texture and rich flavor. Common recipes blend the walnuts with rice and brew them with brown sugar. Ingredients like yams, jujubes, peanuts and black sesame seeds can also be blended with the walnuts.

The walnuts can be made into milk and beverages, with or without the addition of cow's milk. Walnut milk can be made at home similarly to the way almond milk is made, while store-bought walnut milk generally contains a significant amount of sugar for better taste. Walnut and jujube milk is an elevated recipe with natural sweet flavor – simply blend the walnuts, jujubes (without pits) and water. 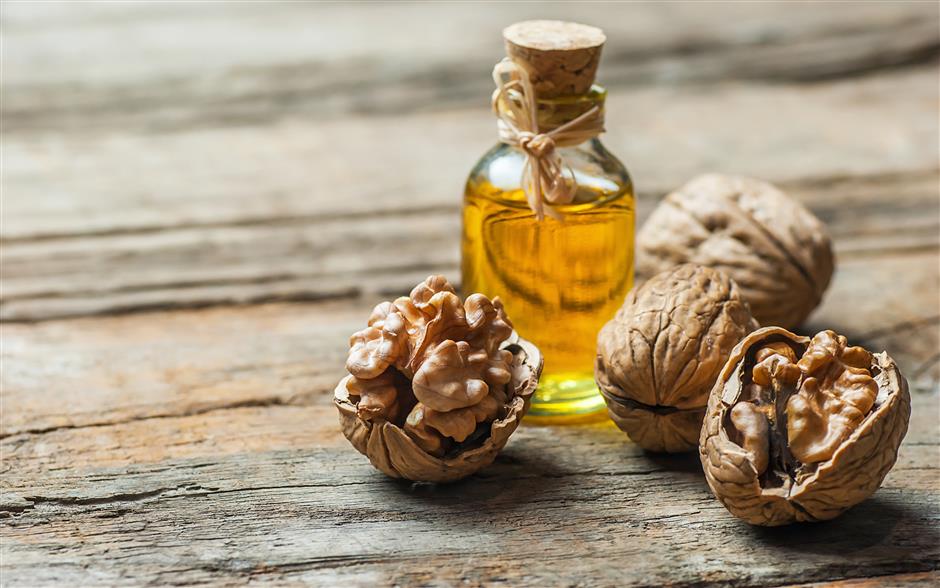 In September, Chinese walnuts, or shanhetao (mountain walnuts), will be available in abundance. The tiny walnuts with dark brown colored shells and kernels have an intense aroma, and are more expensive than large, regular walnuts.

Chinese walnuts are packed with vitamin E and minerals. However, it's more difficult to remove the kernels from the shells. Sometimes people have to use their teeth to crack the nuts. 100 grams of the shelled kernels usually cost between 30 and 40 yuan.

Chinese walnuts are usually seasoned for a salty and savory flavor with a milky aroma, which makes them a popular snack flavor in sunflower seeds and soda crackers. 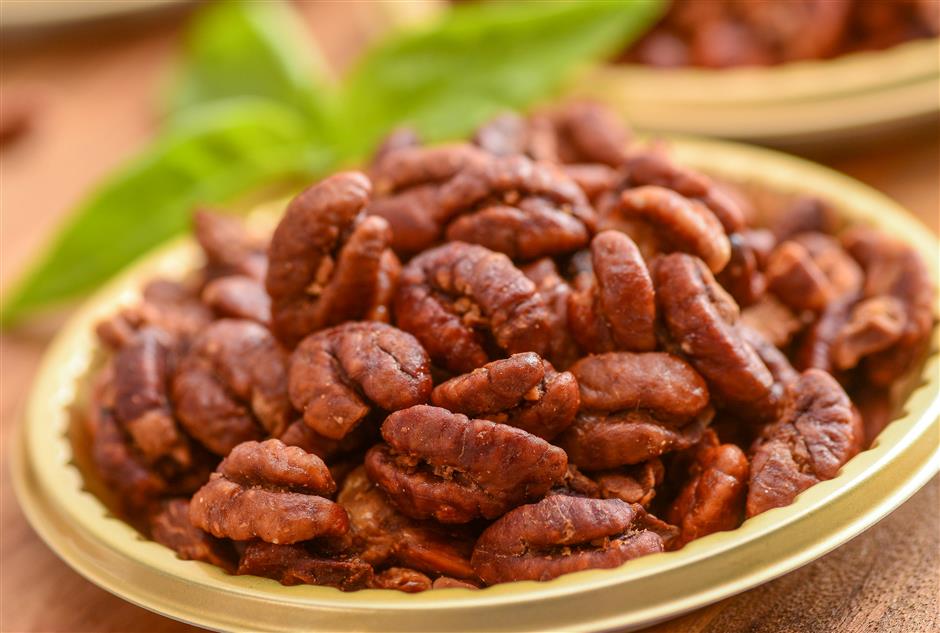 Chinese walnuts are tiny nuts with rich flavors and nutrients.

Special Reports
﻿
The flexible and delectable walnut: not just good, good for you
Korean wave brings tsunami of delicacies to town
A blend of grandeur, divine cuisine and soap
Classic or fried, the explosive flavors of yuanzi are a year-round treat
The color black is where it's at: more to black food than meets the eye
A little pricey but worth it: the pure joy of gobbling down goose
Pastas are the stars at new Italian eatery
A modern take on traditional Taiwanese hotpot
Panino with passion along with a Puglia philosophy
Mediterranean cuisine with a wow factor
EXPLORE SHINE