A taste of Guizhou cuisine in downtown Shanghai

Shan Shi Liu is a Guizhou restaurant in downtown Shanghai, offering signature dishes from the multi-minority province in southwestern China.

The cuisine of Guizhou Province, known as Qian cuisine, is commonly sour and spicy, and its culinary culture if firmly rooted in homestyle cooking.

Located on Maoming Road N, the restaurant is packed at night and on weekends, and a long queue is often seen outside. It's evident that locals are keen to try out the special regional food, and have an appetite for sour and spicy dishes.

The menu is well designed with detailed explanations on signature dishes and regional ingredients. Kaili sour soup fish is a definite crowd pleaser, priced at 108 yuan for a small portion. 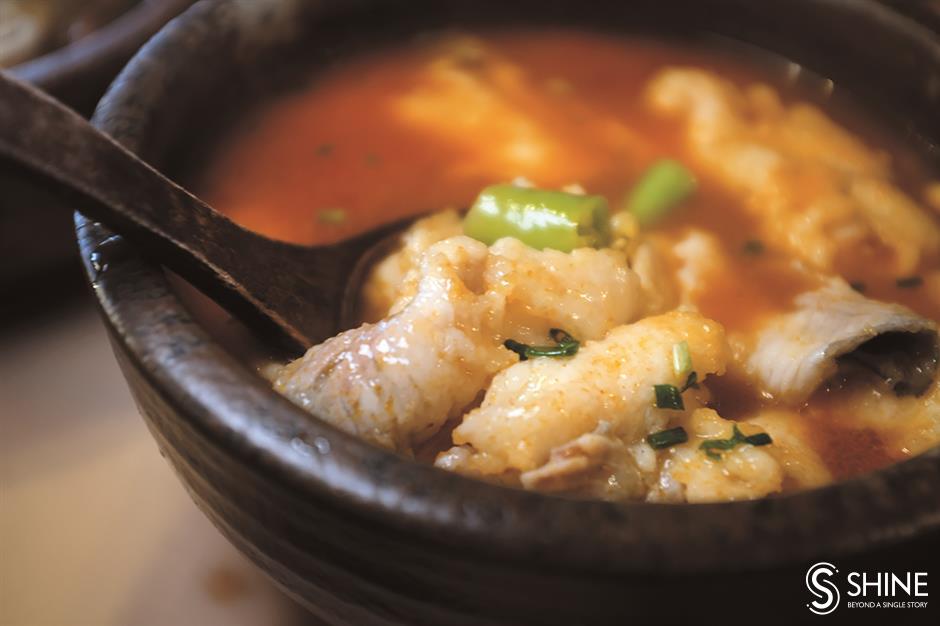 Sour soup is an integral part of Guizhou cuisine, embodying the region's distinctive flavors. The spicy broth with a sour kick keeps you pining for more.

The sour soup fish is a famous dish from the city of Kaili, and traditionally a Miao (minority) delicacy. It features the fermented, sour sensations that are the driving force behind Kaili's local food. The red sour soup at Shan Shi Liu is made of fermented wild tomatoes, featuring a vibrant red color and strong flavors. I found the soup to be less sour than the ones I've tried in Guizhou Province. The kitchen might adjust the flavors based on the local flavor profile. 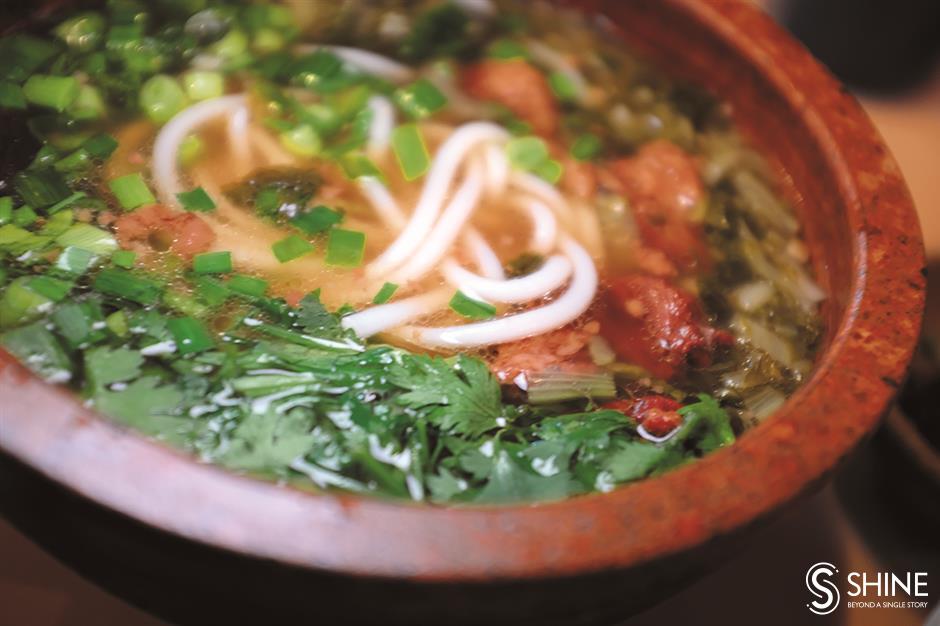 Huaxi beef rice noodles are another specialty of the region. A bowl of rice noodles is a common breakfast for the locals. The noodle soup is made of ox bone and beef, with a blend of diced beef, coriander, and sour cabbage mixed in to create an irresistible flavor. Red chili powder comes on the side for those who prefer an extra spicy taste.

Other offerings include Guizhou spicy chicken, cured meat platter, tofu with spicy oil and Weining potato cake, all of which are good intros to the province's culinary culture.

﻿
Special Reports
﻿
A taste of Guizhou cuisine in downtown Shanghai
Awake at crack of dawn to ensure highest-quality grapes for clients
The flexible and delectable walnut: not just good, good for you
Korean wave brings tsunami of delicacies to town
A blend of grandeur, divine cuisine and soap
Classic or fried, the explosive flavors of yuanzi are a year-round treat
The color black is where it's at: more to black food than meets the eye
A little pricey but worth it: the pure joy of gobbling down goose
Pastas are the stars at new Italian eatery
A modern take on traditional Taiwanese hotpot
EXPLORE SHINE