Food for fall has it all: fall food from farmers, fishermen

Stepping into the fall season, a time to celebrate abundant harvests, the dinner table is becoming more exciting with the arrival of new batches of vegetables, fruits and seafood. While strolling under the golden trees, visiting local fresh produce and seafood markets is a great plan for the weekend. 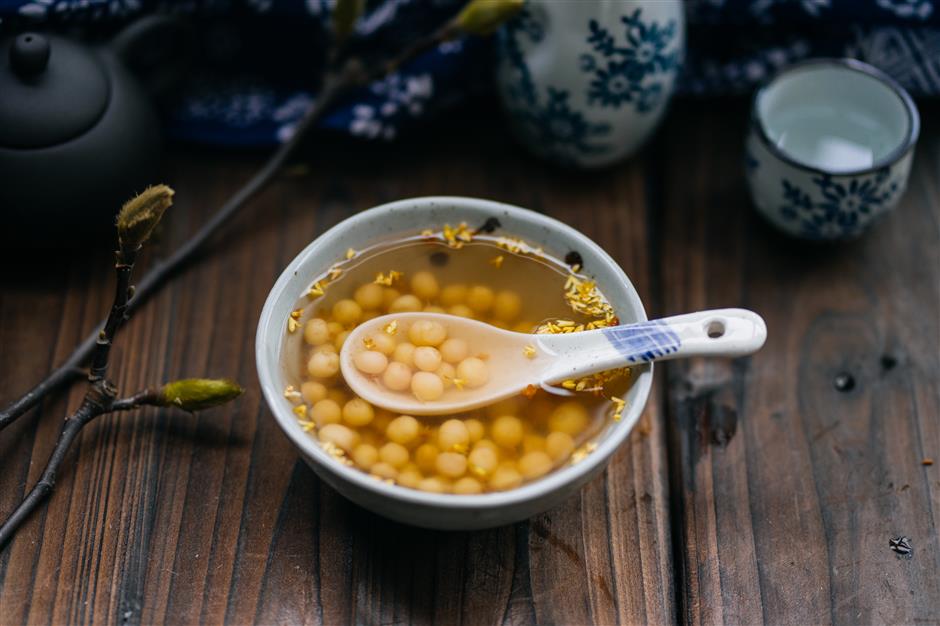 A little bit of everything

Summer is the season to enjoy gourds and leafy greens, while fall is all about the squashes, root vegetables, beans and much more.

One of the must-haves of the fall season is jitoumi, or chicken head rice. It's the tiny white kernels in gorgon fruit (qianshi), an aquatic plant with leaves that float on the surface. It's one of the most treasured ingredients in the areas south of the Yangtze River that comes into season in August and ends in October.

Although a little goes a long way, as a seasonal produce, jitoumi is more on the expensive side. The fresh kernels are sold for around 15 yuan per 100 grams, and the price could double for the premium quality kernels.

The reason behind the high price tag is that jitoumi must be harvested and processed by hand, requiring intensive labor and time. Jitoumi farmers must wake up very early in the morning, and stand in water for many hours to cut holes in the center of the giant round leaves. They then pull the fruit from the water and cut from the stem. Retrieving the small kernels from the hard shells by hand is a tedious task.

Jitoumi is simple to cook, and is used in both savory and sweet cooking. One dish to wow the guests in the fall season is hairy crab meat and roe with jitoumi, an extra time-consuming dish to make (due to having to extract the meat and roe from hairy crabs), yet it highlights the unique texture of gorgon fruit kernels against the rich, glistening hairy crab roe.

Simpler savory jitoumi recipes involve stir-frying the kernels with freshwater shrimp and crunchy vegetables like green beans and lotus root. Jitoumi and water caltrop stir-fry is like autumn served on a plate, as the starchy, sweet tasting water caltrop is also in season now.

Meanwhile, the easiest way to enjoy the original flavor and texture of jitoumi is cooking the kernels in boiling water with melted rock sugar in it, which only takes a few minutes. The jitoumi can also be added to sweet, soupy desserts like white fungus soup with jujube, red bean soup and mung bean and lily bulb soup. 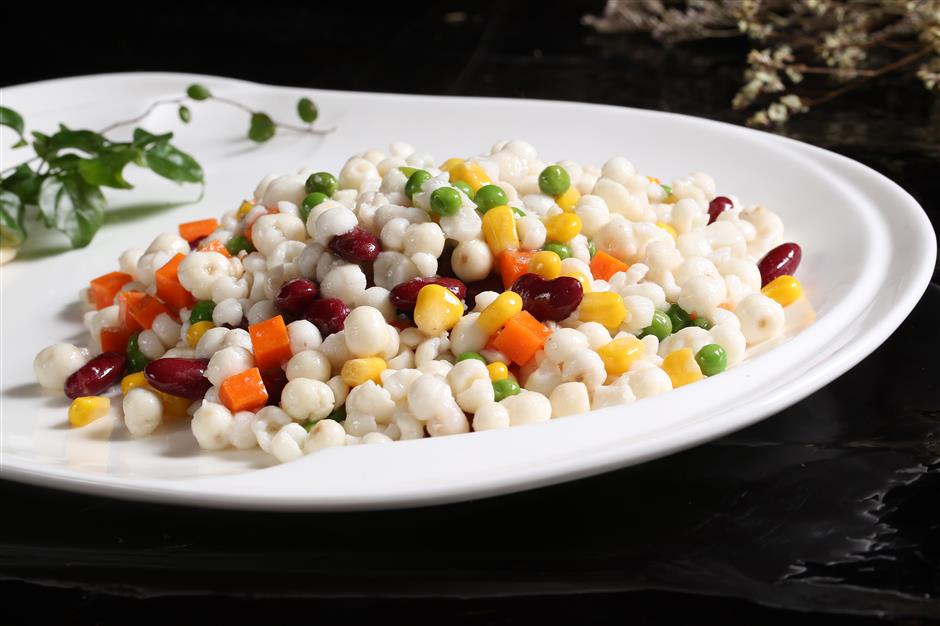 Sweet potatoes gradually come into season at the beginning of fall, and they're among the most popular staple-like vegetables in China. Here, sweet potatoes are categorized according to the color of their flesh: white, orange/red and purple, though modern agriculture has brought many more exciting and delicious varieties within each category, which are also more expensive.

The white-fleshed sweet potato is a drier variety that's traditionally roasted whole or sliced and steamed to serve as a staple alternative. The orange-fleshed variety contains more moisture and sugar, as well as more vitamin A and carotene, while the purple sweet potatoes with saturated natural color are drier and starchier and preferred in sweet recipes.

The small, slender, orange-fleshed sweet potatoes have become more popular in recent years. They are usually extra sweet with more friendly fiber content, as the smooth texture is easier for chewing and digestion. They also take less time to cook and eating a couple won't make one feel overly stuffed. The Tianmu Mountain region of Zhejiang Province is known for the small, fragrant sweet potatoes. 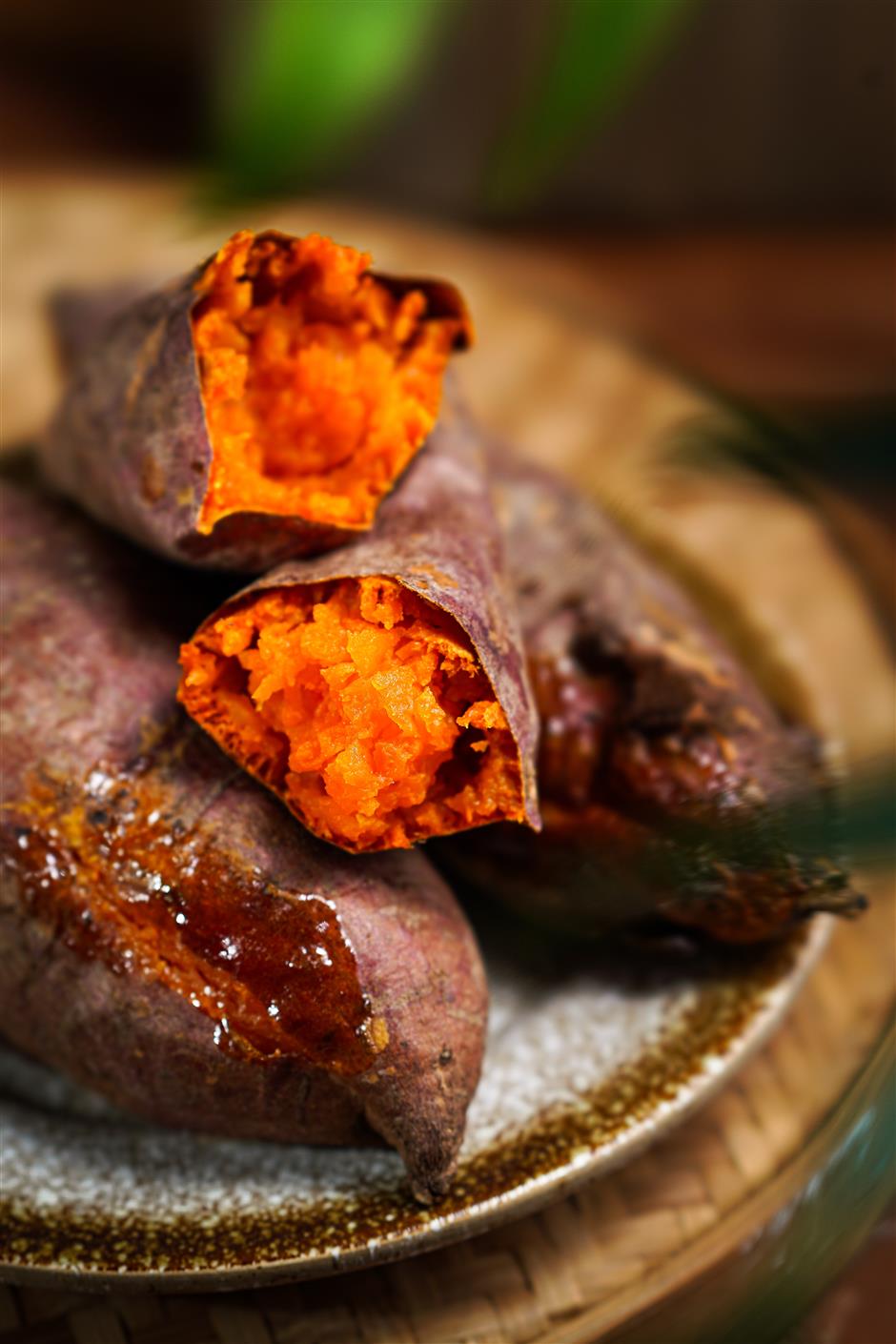 Fresh taros are also hitting the market in September, a versatile root vegetable that can fit many roles in cooking. Lacking a prominent flavor of their own, taros are incorporated in sweet and savory recipes.

There are two kinds of taros: the small, oval shaped taro with rough skin known as yunai, and the large, spindle-shaped Lipu taro named after its place of origin, Lipu County in Guilin, Guangxi Zhuang Autonomous Region.

Stir-frying yunai with scallions is a local favorite – a vegan stew with rich flavors from the scallion, garlic and oil. The texture of the taro becomes very soft.

The Lipu taro, on the other hand, has thin, purple patterns across its white flesh. It contains less moisture and higher starch content, which also gives it a softer texture and sweeter taste.

Lipu taro fried rice is a staple dish with stir-fried dices of taro, sausage and vegetables. The root vegetable can also be steamed with different sauces, and presents a flavor that can rival meat. It's also commonly braised with rich meats. Taro and duck is a classic recipe. 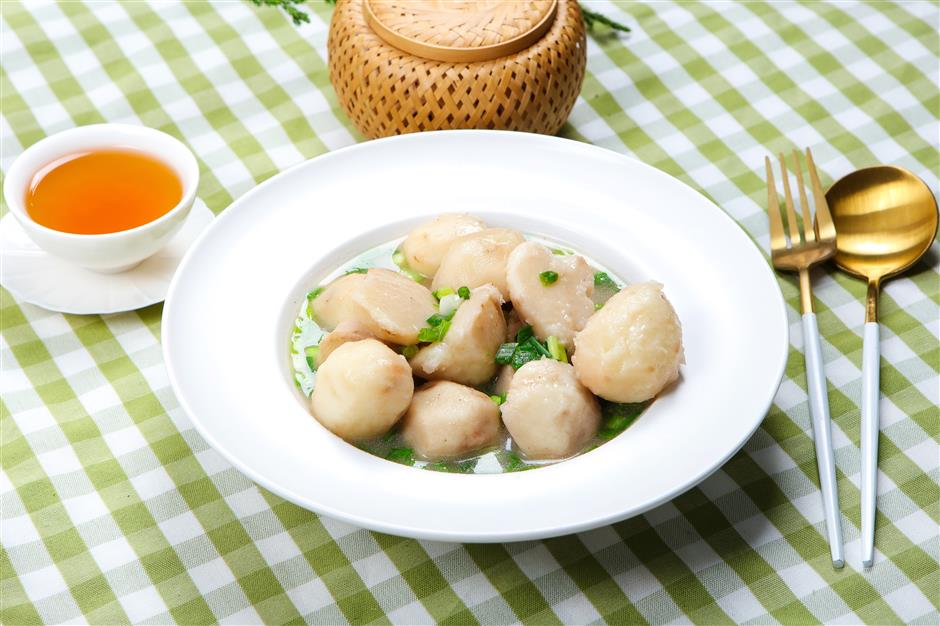 Fall is the season for crabs, whether it's the delicate freshwater hairy crab or meaty and umami sea crab.

Hairy crab season is a true extravaganza, and the earliest batches are now available in markets, though they'll be bigger and better next month. October is the time to enjoy female hairy crabs, while the male crabs are best in November.

Hairy crabs are usually steamed directly and served with vinegar seasoned with thin shreds of ginger, or split in half and then stir-fried with rice cakes or other ingredients. Whole crabs are usually more convenient to cook at home, while restaurants normally make dishes using the extracted meat and roe – such as adding the rich roe into "lion's head" meatballs, fillings for soup dumplings, or stir-frying tender asparagus with the equally tender hairy crab leg meat.

Warm yellow wine is the ideal beverage to pair with hairy crabs, which is mild, sweet and can warm the body.

Since the recent start of fishing season, gazami crabs are popular on local dinner tables. Fresh, live gazami crabs can be steamed directly with slices of ginger and scallions for simplicity, but they are extra delicious when braised or stir-fried.

The first step is to butcher the crabs, removing the gills and heart, and then cutting them into large chunks (two or four pieces for each crab, depending on the size). With crabs that pack rich roe, an extra step is required to seal in all the goodness – coat the cross section with a thin layer of starch and fry in hot oil to form a "crust," which significantly elevates the flavor.

Next, cook the chopped and fried crabs with oil, ginger, scallions and dried chili, seasoned with a splash of light soy sauce near the end. The stir-fry recipe can also include pre-cooked rice cakes 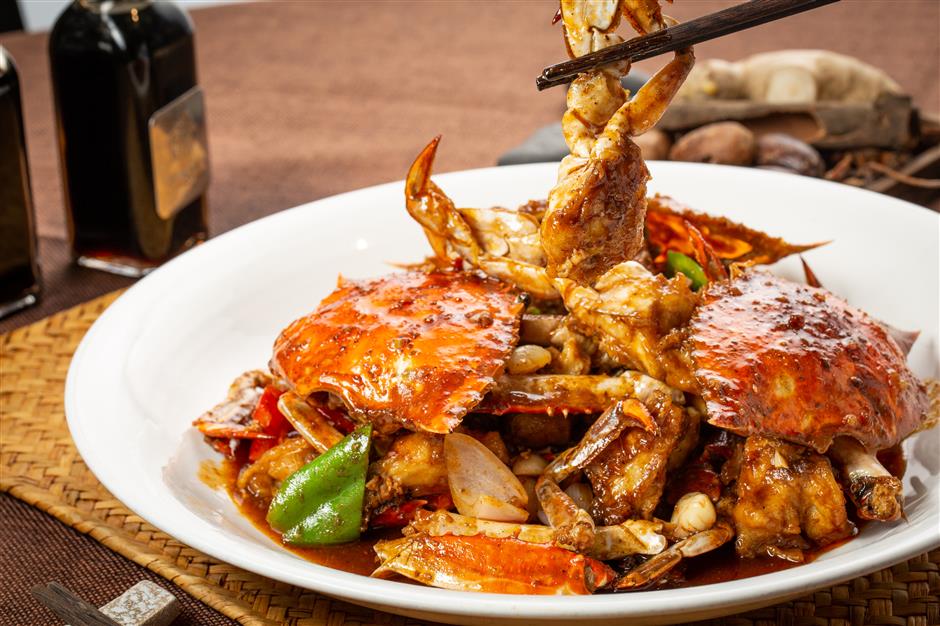 Fall is the season for fresh river and sea crabs.

Many people have been snacking on pomegranates lately. The juicy, sweet and sour ruby-liked pulps are packed with folic acid and Vitamins C and K. In China, pomegranates are usually eaten directly or made into juices and are seldom used in cooking.

Frozen pomegranate was once a trendy recipe. The seeds are frozen overnight and drizzled with cold and condensed milk. Let it sit for 30 seconds, mix and enjoy. The milk will form an icy coating over the pomegranate seeds.

There's an ongoing debate on whether pomegranate seeds are edible. They certainly can be eaten, but they're not easy to digest, especially for people with weak stomachs. There are soft seed varieties of pomegranates, however, in which the seeds are easier to chew and digest.

It's worth mentioning that pomegranates are quite high in sugar content, so it's best to eat them in moderation. 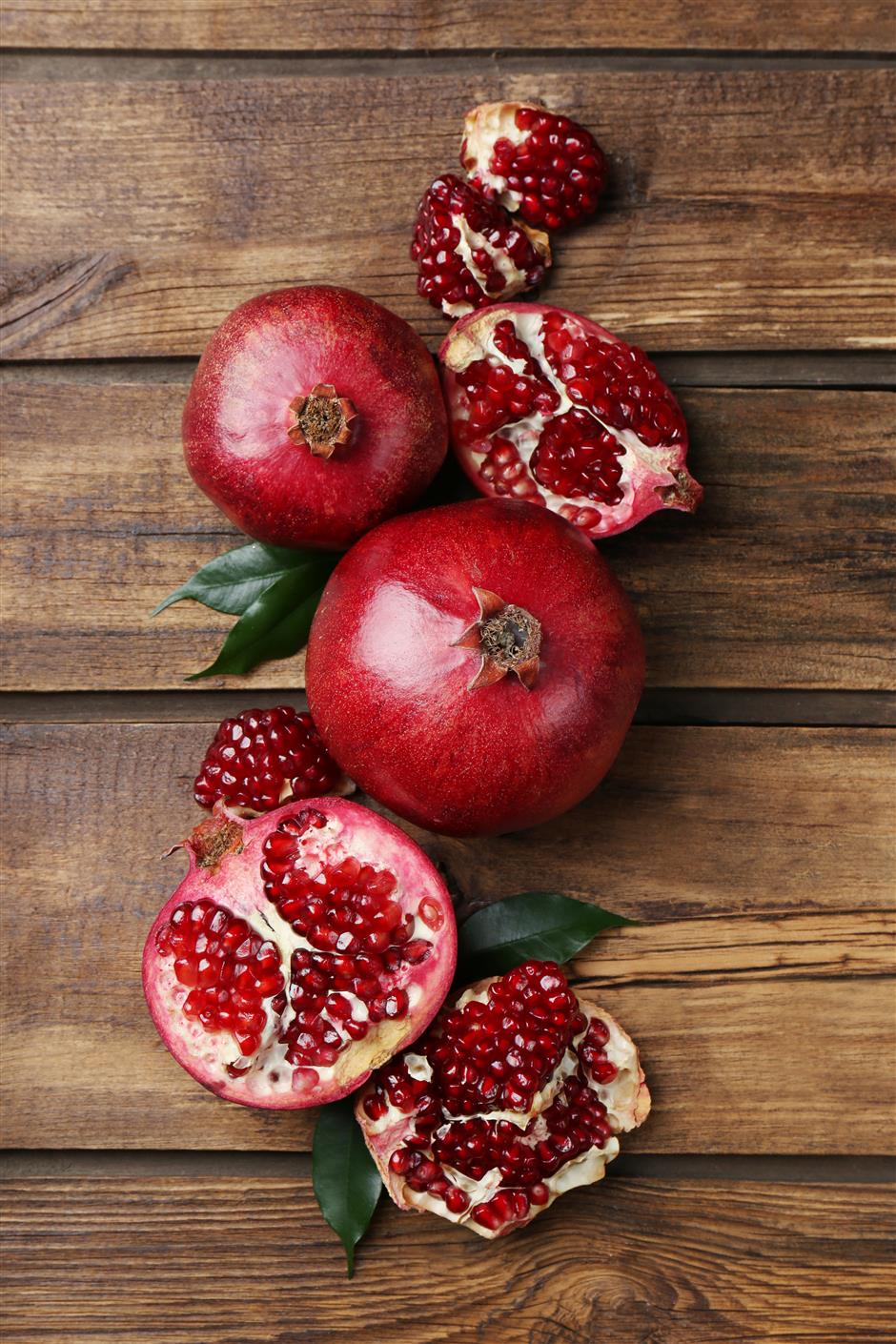 Pomegranates are a fall season fruit.

Persimmons are another popular fall fruit, with a number of varieties presenting different tastes and textures. If you like crunchy fruits like apples, go for yellowish persimmons from Guangxi Zhuang Autonomous Region, while the fireball-like persimmons in northern China are very soft and even jelly-like.

Fire crystal persimmons are small, soft and juicy. They have very thin skin that peels off easily, no seeds, are sweet as honey and have long been regarded as a treasure among Chinese fruits.

A perfect companion to tea, dried persimmons known as shibing are a sweet snack reserved for the winter season. They are air-dried so the moisture evaporates, and the sugar separates to the surface to form a layer of white frost. Fuping County in Shaanxi Province is well known for its dried persimmons. The smaller sweet persimmon cakes have a soft jelly-like center and thin chewy skin.

The price of prunes has dropped significantly, as varieties from Xinjiang Uygur Autonomous Region are arriving in abundance in fruit shops. Sweet, ripe prunes have soft flesh that can melt in your mouth, and they help digestion.

Now is also the time to enjoy pomelos, the large, round citrus fruit with low calories and high fiber content. They're closely related to grapefruit, but have thick, tough skin. The larger pulp of the edible flesh isn't tart or tangy, and comes in different colors – white, red and pink. 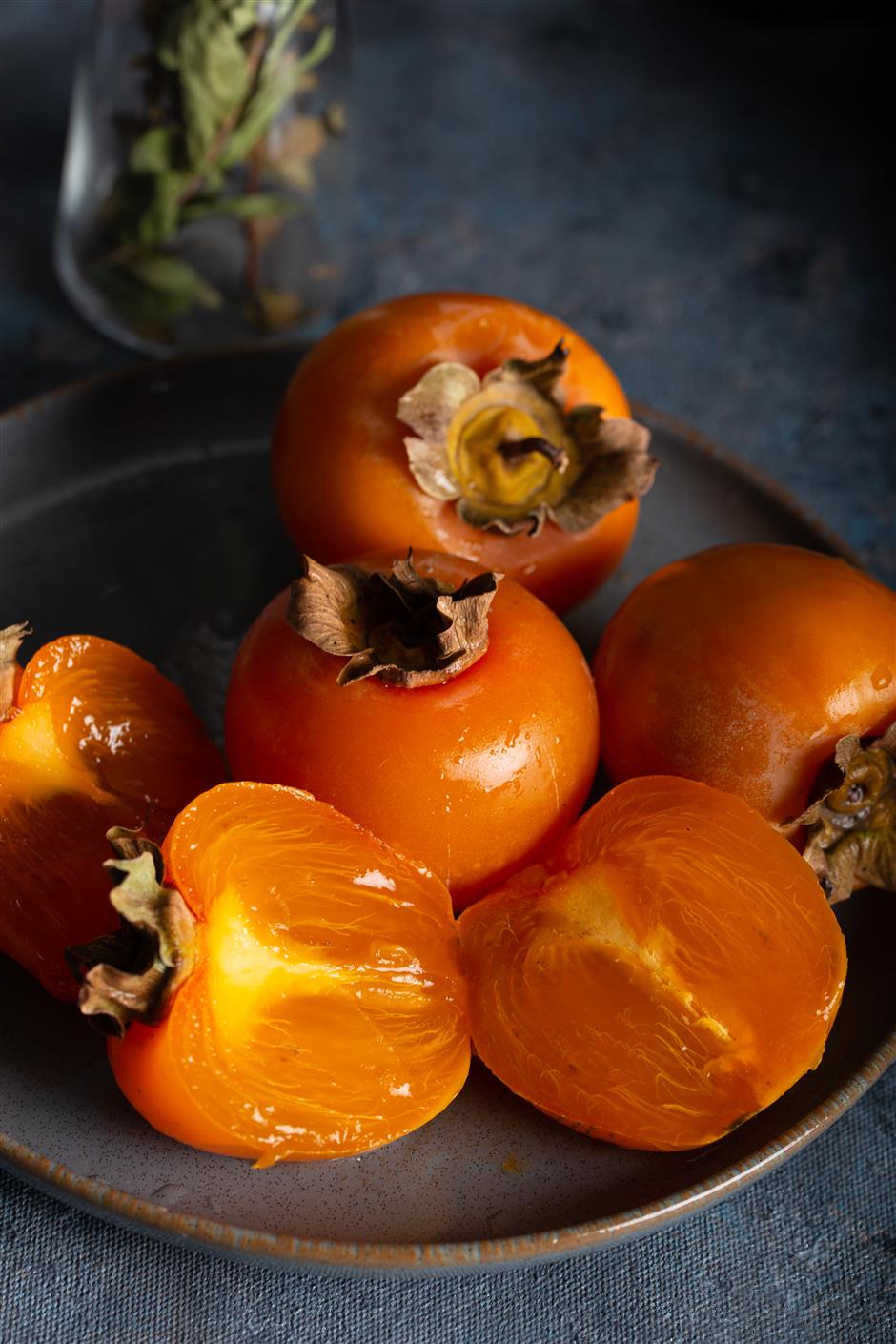 Special Reports
﻿
Food for fall has it all: fall food from farmers, fishermen
Tantalizing Mid-Autumn festivity menu options
Best of Huaiyang cuisine comes to Changning
Chongming's sweet, light cuisine in middle of city
Give a hoot for root vegetables: perfect root veggies any time of year
Burger Month a sinful celebration for carnivores
Hot and steamy, extra healthy: steaming toward better food & health
Spanish fuses with Japanese at Malabar 2.0
A taste of Guizhou cuisine in downtown Shanghai
Awake at crack of dawn to ensure highest-quality grapes for clients
EXPLORE SHINE