Drilling for oil in your kitchen: the building block of tasty Chinese cuisine

Cooking begins with oil. It starts the wok, lights up salads and perfects baking.

There are aisles of cooking oils and fats to choose from in supermarkets. In this age of rising health consciousness, people are paying extra attention to cooking oils and more frequently choosing ones with lower saturated fat.

Chinese stir-frying is a technique that calls for cooking oil with a high smoke point; otherwise, food is ruined when the oil burns and develops a bitter taste – especially with quick stir-frying over high heat, as the shortened cooking time requires an extra hot wok and more oil. 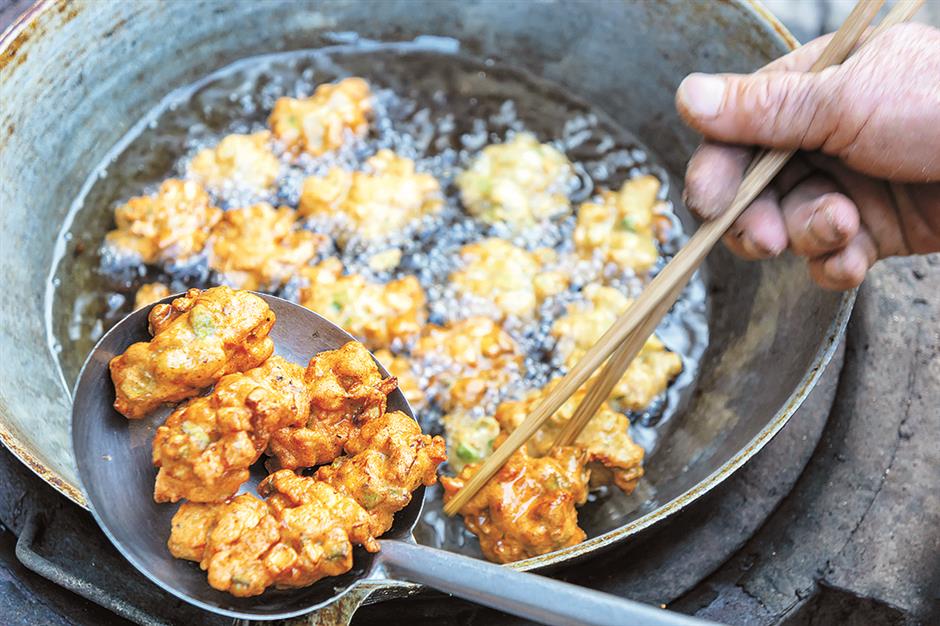 Rapeseed oil is one of the main cooking oils in China. It's known as caiziyou or caiyou, and has a darker, honey-like color.

In rural areas, traditional, freshly extracted rapeseed oil is the go-to cooking oil, the flavor of which is more intense than bottled, store-bought oils – with a bright color that makes the vegetables and meat in stir-fries look more appetizing.

Rapeseed oil is irreplaceable in Sichuan cuisine, as it plays the role of blending the flavors of chilis, peppercorns, spicy broad bean paste sauce and more to unleash fat-soluble aromatics.

The traditional rapeseed oil-extracting process is very complicated, starting with selecting and roasting the rapeseeds, which are then crushed and steamed before pressing to extract. 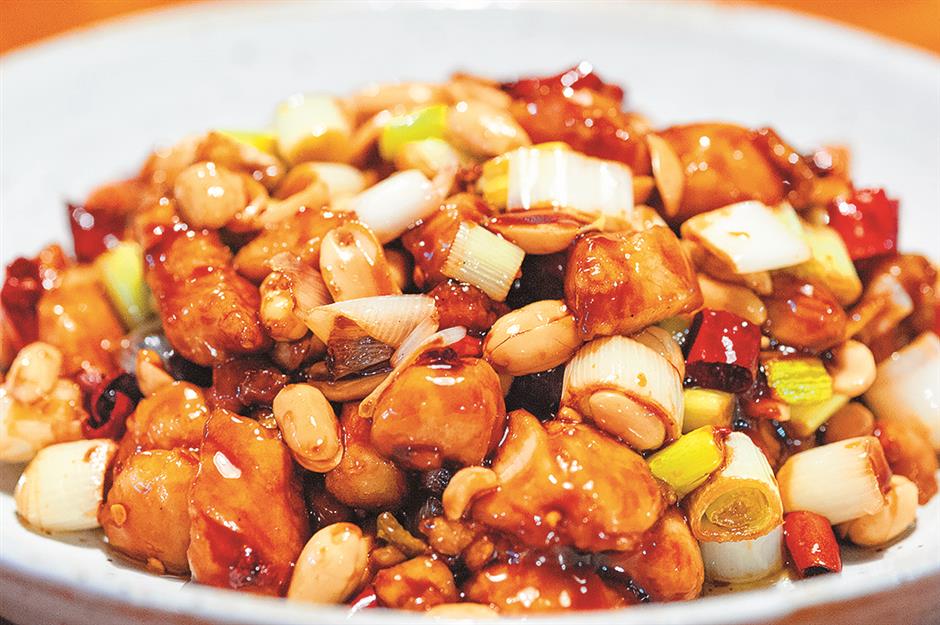 Peanut oil is another traditional cooking oil in Chinese cuisine. The nutty scent can make stir-fries taste more flavorful, and it's also ideal for high heat cooking, including deep-frying.

Corn oil is often used in deep-frying and baking, as it has a neutral flavor that doesn't alter the light and sweet taste.

Olive oil is now widely used in Chinese home kitchens for light stir-frying dishes and salads, because it's one of the healthier cooking oils. It's usually used in easy sauteing and sauces/dressings, but rarely used in deep-frying (especially extra virgin olive oil, which has a lower smoke point).

Extra virgin olive oil isn't suitable for stir-frying, because it has a low smoke point and stronger flavor.

Grapeseed oil is also becoming more popular in household kitchens, because it has more Vitamin E and antioxidant properties with a less intrusive smell and taste that works with everyday recipes. It's also high in polyunsaturated fat and a good source of linoleic acid.

Sesame oil is an extra fragrant oil that's often used to boost the flavor of salad-style cold dishes and soups. A few drops go a long way, but it's usually not used for stir-frying.

In Sichuan-style spicy hotpot, sesame oil with minced garlic is the authentic dressing that coats the meat and vegetables with extra rich flavor while toning down the spiciness. 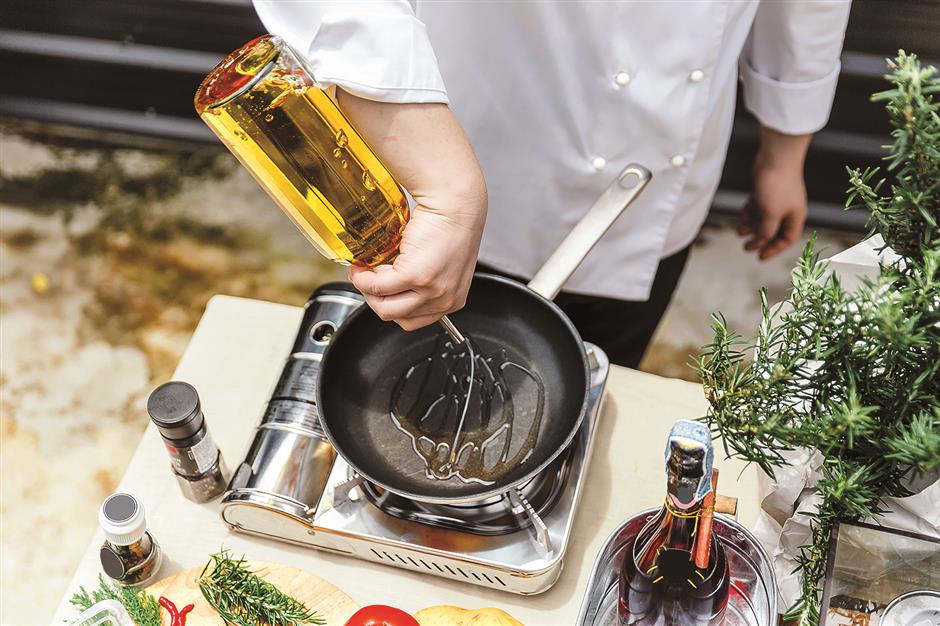 Olive oil is widely used in sauteing, sauces and dressings.

When working with sesame butter – the thick and extra oily nut sauce made from grounded toasted sesame seeds – adding sesame oil can help dilute the sauce and make it blend better.

Coconut oil has been trending as a healthy superfood product for years, with numerous celebrities and influencers endorsing it as a food or beauty product while lauding its versatility.

As an ingredient for healthcare and beauty products, coconut oil is natural and free from chemicals like parabens and sulfates. It's found in items like lip balms, makeup removers and masks, and has a light coconut scent that's very pleasant compared to other types of oils.

But is coconut oil an ideal option for cooking? Not exactly. It contains a lot more saturated fat than most other oils, and it's not necessarily healthier than vegetable oils.

In some recipes, especially baking, coconut oil is the plant-based alternative to butter or lard, as it has a solid form at room temperature. It also works with dishes that feature coconut cream or milk for flavor harmony.

Niche cooking oils like walnut oil, flexseed oil and avocado oil are also used in Chinese cooking for their health benefits, but they tend to be more expensive.

Cooking oils can develop a distinct smell when they oxidize after being stored too long, at which point they're no longer ideal for cooking. However, oils past their prime can be used in other ways, such as fertilizer for certain types of house plants. 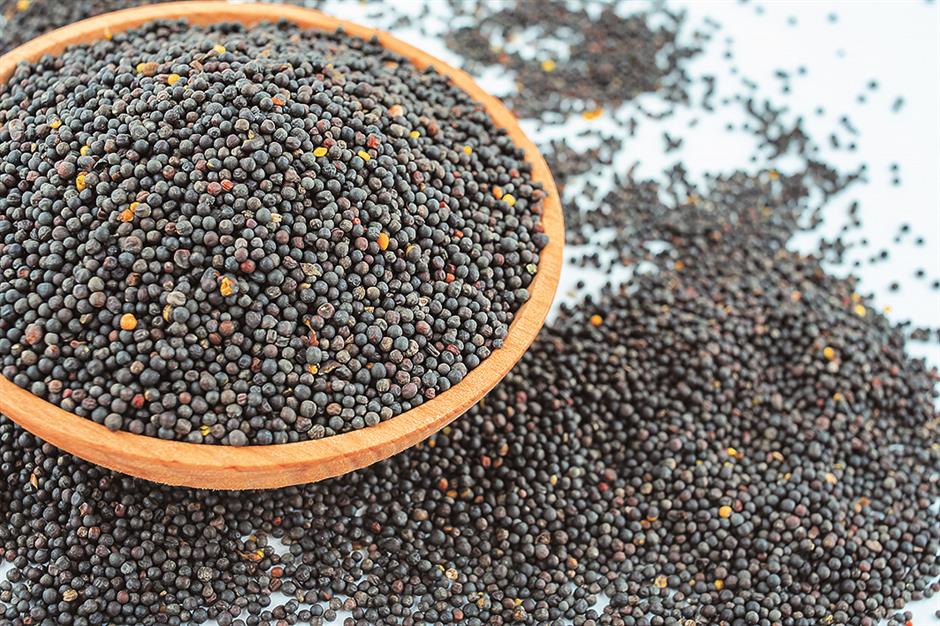 Flexseed oil is considered one of the healthier cooking oils.

Oil disposal requires extra attention. Pouring oil or oil-rich sauces down the sink can cause oil concreting inside pipes, which over time can slow water flow and even cause blockages. The best approach is to dispose of the oil and oily sauces in the garbage, and wipe oily surfaces from plates and bowls before rinsing them with water and dishwashing liquid.

Lard, the rendered pig fat known as zhuyou, is widely used in Chinese cooking. It's especially popular in areas south of the lower reaches of the Yangtze River, where it's used in both savory and sweet recipes.

In ancient China, animal fat was used in cooking before vegetable oil, as the extraction of vegetable oil started much later in the Han Dynasty (202 BC-AD 220). A few decades ago, many favored fatty pork because the extra fat could be used to render lard and save money on cooking oil.

Today, Chinese people still prefer to render fresh lard at home with pork belly fat rather than buying it from supermarkets. Pork cracklings produced from rendering pork fat is a delicious snack or topping for staple dishes.

Rendering lard requires blanching cubes of pork fat in boiling water to remove the impurities and malodorous smell, then frying them on low heat in a wok to extract the oil. 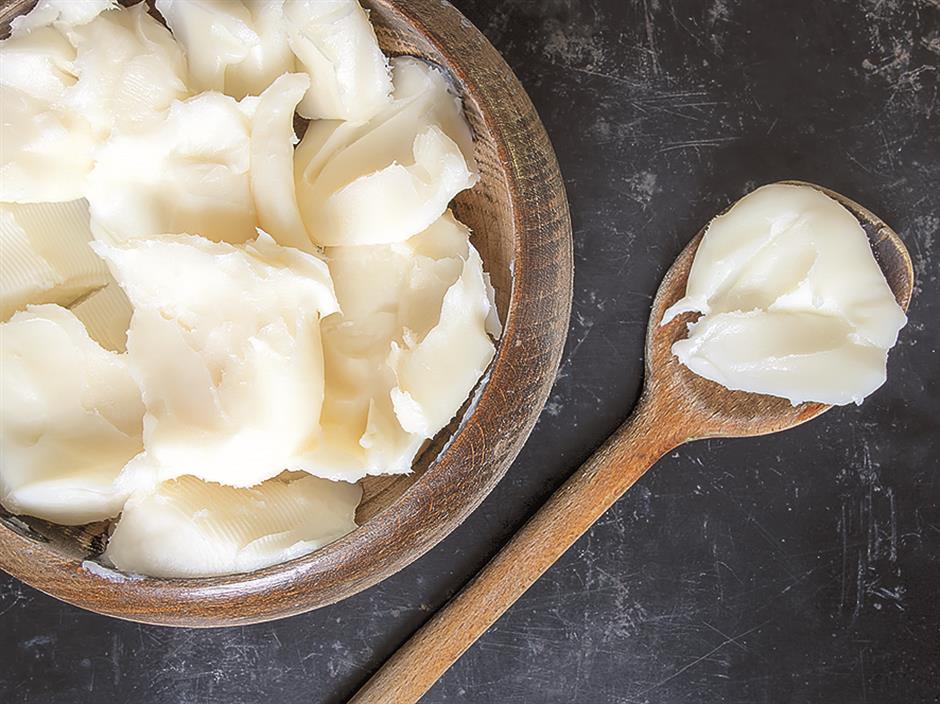 Lard is extracted from pork fat.

In Chinese pastry making, lard is the key to achieving flaky layers of crust or wrapper as well as moist filling.

Iconic black sesame glutinous rice balls contain a considerable amount of lard in the filling. As it dissolves, the filling becomes runny and smooth.

Freshly rendered lard can last a long time in sealed containers. Adding a dollop to soup noodles can significantly boost the flavor. 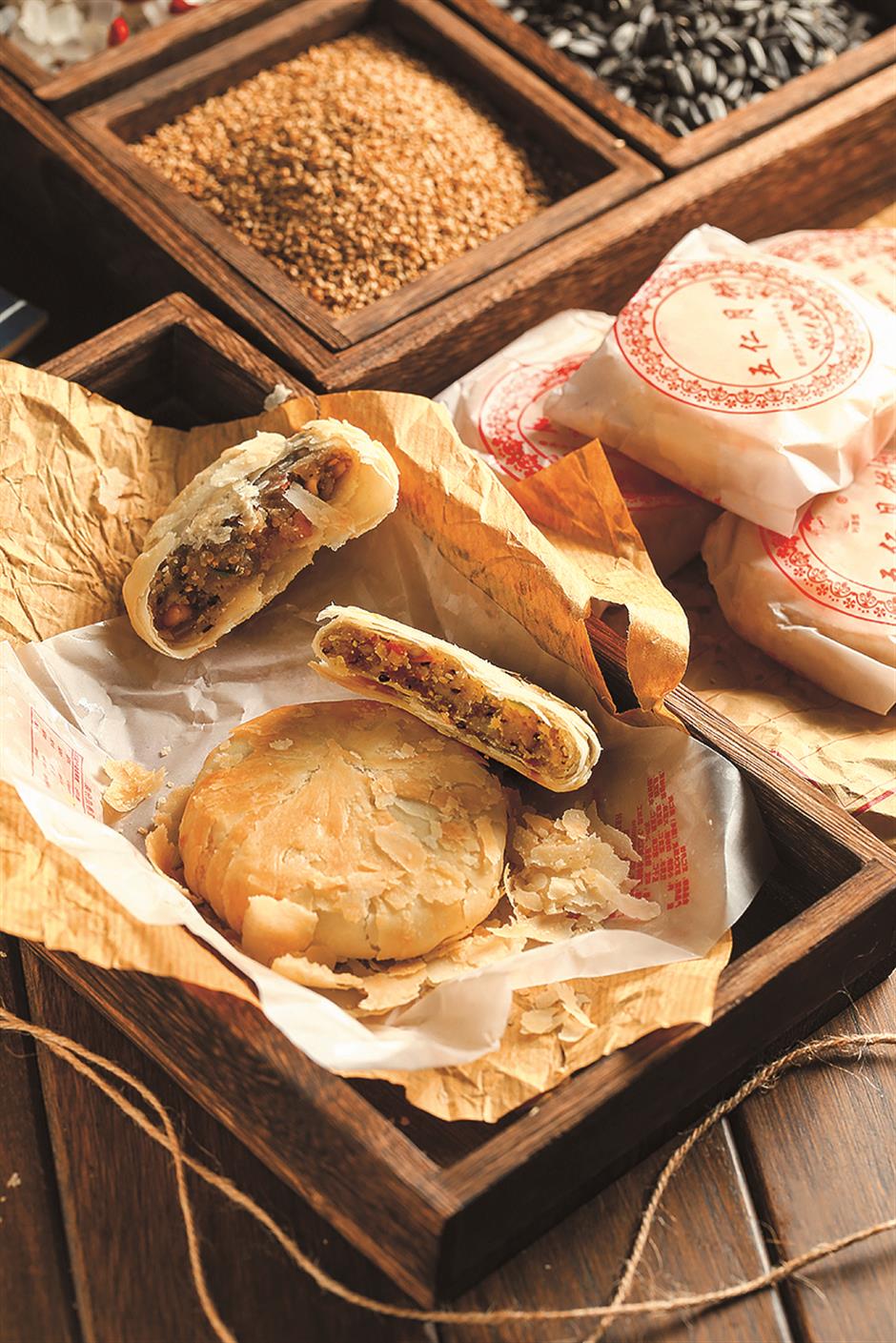 Tallow is not as commonly used in cooking as lard, but it's the base of traditional Sichuan and Chongqing-style hotpot. Spicy hotpot condiments are usually available in two forms – solid beef tallow condiment bricks and the vegetable oil version that's more sauce-like.

The beef tallow hotpot condiment can also be broken into smaller pieces and used in various stir-fries and stews to produce spicy, tongue-numbing flavors without mixing the spice pack from scratch.

Butter was introduced in China from the West, and today it's widely used in Chinese cooking, especially baking, as it has a creamy richness that lard lacks. 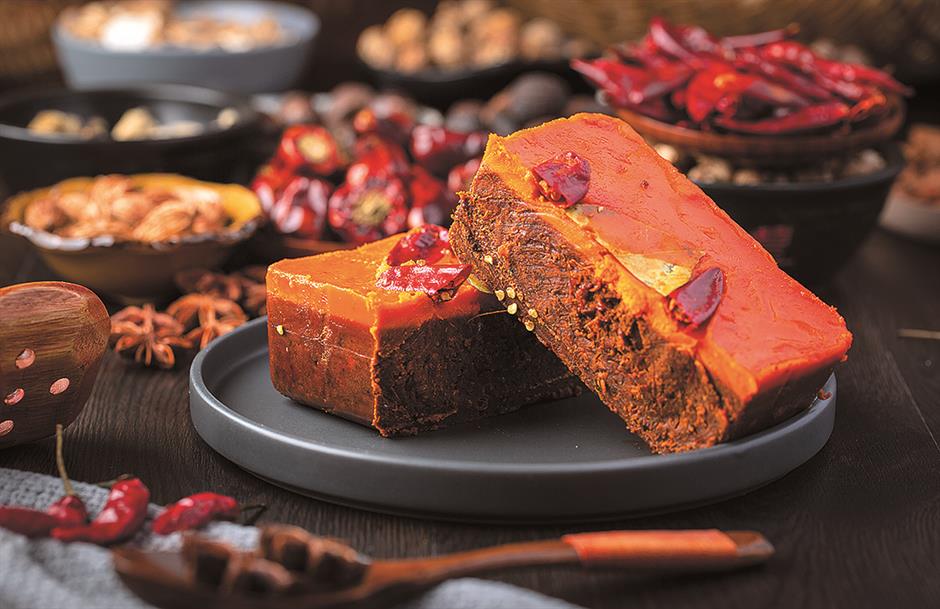 A quick vegetable delight with an aromatic dressing that can also be used for other types of warm salads like okra in winter.

1. Rinse and wash the spinach thoroughly – it's important to remove all the dirt especially at the roots.

2. Boil a pot of water, blanch the spinach in water for two minutes, then immediately put it in iced water to cool it down.

3. Squeeze the cooked spinach gently to remove the water, then cut the "ball" of spinach in the middle to break it into smaller pieces.

5. A dash of chili oil can also be added for extra kick. 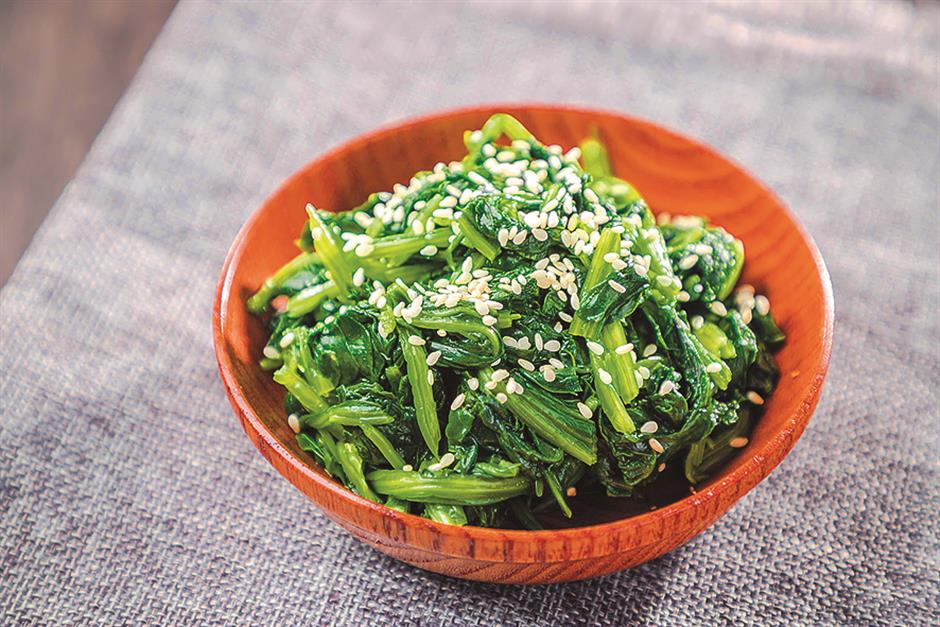