Last Sunday marked the Chinese solar term lidong, or the beginning of winter. As the city gears up to brace for the impact of plummeting temperatures brought by the cold wave, winter menus are unfolding in homes and at restaurants.

While enjoying lamb stews and sizzling hotpots to keep the body warm and cozy, don't forget healthy vegetables. While winter isn't exactly the best season for fresh produce, it still offers abundant vegetables and fruits thanks to modern farming and logistics.

This winter, vegetable prices are catching up with meat, as pork prices have dropped significantly from last year. 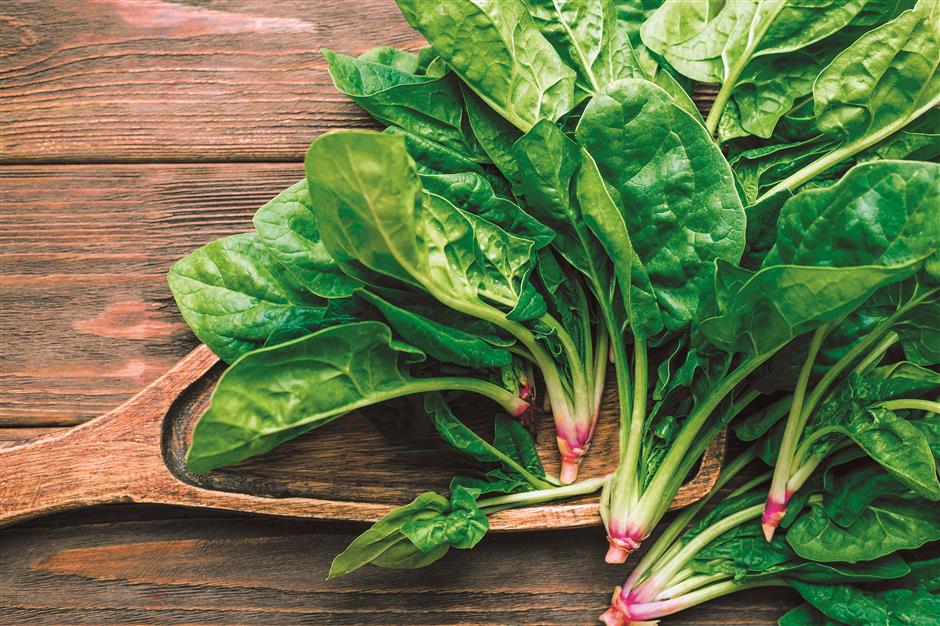 Even though vegetables like turnips and cabbage aren't on the winter menu, many green vegetables are frost resistant and can withstand light snow and low temperatures, such as spinach, leek, mustard green, bok choy and kale.

In China, there's the concept of shuangdacai – vegetables that have been hit by winter frost.

The great Tang Dynasty (AD 618-907) poet Bai Juyi (AD 772-846) wrote a poem about Chinese cabbage, saying that the heart of the frostbitten cabbage isn't dead, it becomes even sweeter.

Caixin, the flowering variety of green vegetables with longer, rounder stalks and heartier texture also known as Chinese kale, can also take a little frost in early winter, which makes them even sweeter and more tender.

Premium-quality Chinese kale is perfect for poaching in boiling water (until the leaves turn vibrant green and the stalks soften), then drained and seasoned with an umami dressing of light soy sauce, minced garlic, chopped scallions and a splash of sizzling hot oil to elevate the fragrance. 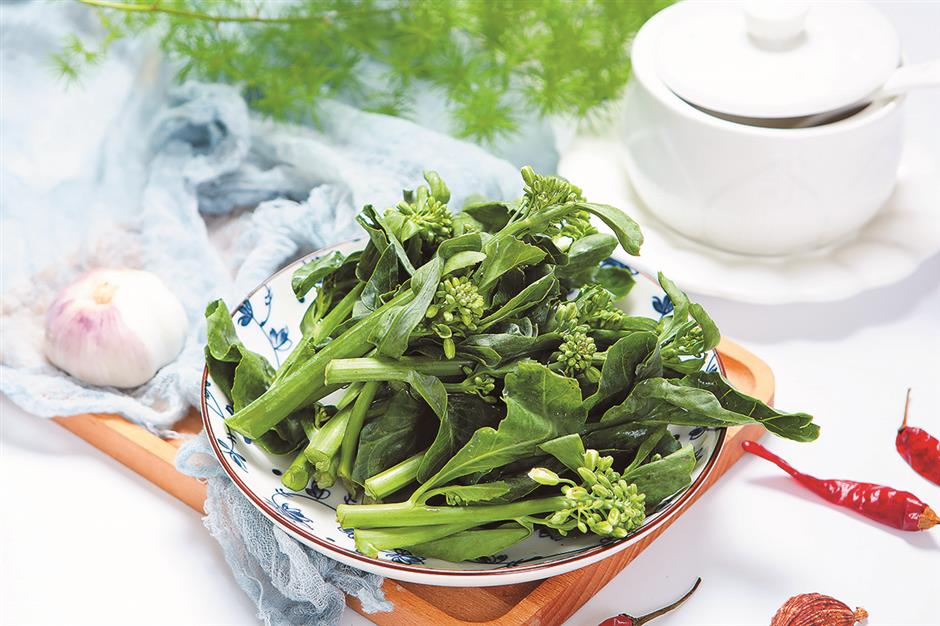 You can also find another variety of Chinese kale in markets – red Chinese kale with purple red stalks, yellow flowers and green leaves, also known as caitai. It's an expensive vegetable since it's mostly produced in Hubei Province and transported to markets nationwide; 500 grams costs as much as 15 yuan.

The stalk, leaf and flower of red Chinese kale are all edible, though some people dislike the flower's texture and remove it before cooking. The stalk is quite special, as it turns green when fully cooked.

The flavor of red Chinese kale is different from the common green variety, boasting stronger flavors but a tad bitter. It's generally stir-fried with garlic and ginger, and especially good when cured pork is incorporated since the extra oil significantly elevates the flavor. 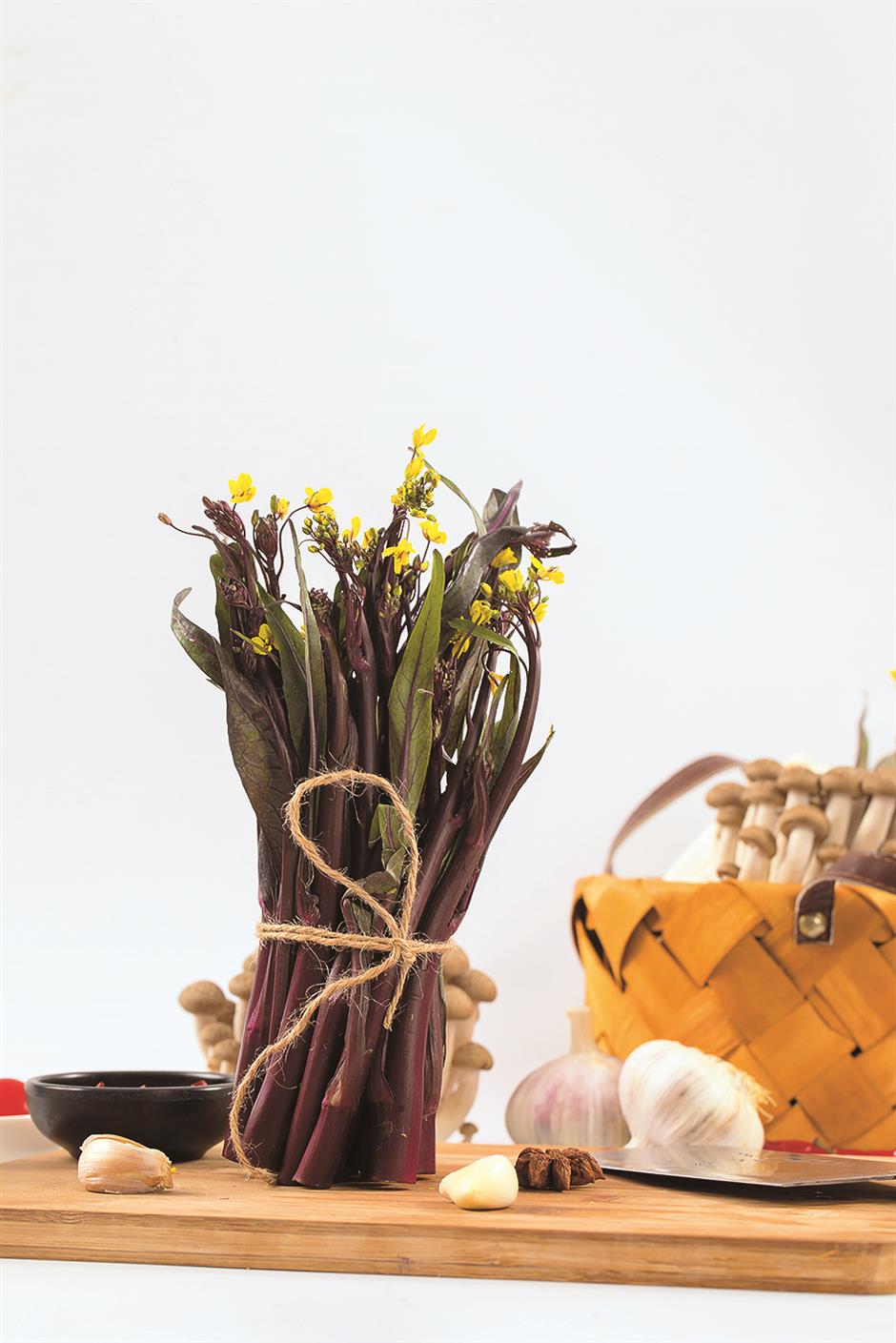 Spinach is a humble, healthy green with a sweeter and less grassy taste. Frostbitten spinach is especially sweet but not astringent. The texture of winter spinach with red roots is also slightly different, as it's no longer crisp and crunchy but soft and pillowy.

Spinach can be stir-fried with garlic and salt, or poached to make a salad with basic dressing. And for winter hotpot meals, spinach is the icing on the cake. After plates upon plates of rich meat, seafood and offal, it's extra satisfying to finish off with spinach, noodles and a little bit of broth and sauce.

For those susceptible to kidney stones, it's best to avoid excessive amounts of fresh, raw spinach because it's rich in oxalic acid. However, poaching it in water can neutralize the acid.

Frostbitten qingcai, known as bok choy in the West, is a must-have seasonal vegetable. Unlike regular bok choy that's larger in size with a crunchy texture, frostbitten bok choy has a soft texture and sweet taste. The shorter variety is especially good, and the stalks are extra sweet. When it's fully cooked, the vegetable will become very soft without the fibrous texture. It can be stir-fried alone or paired with reconstituted shiitake mushrooms for elevated flavor.

Frostbitten vegetables are usually more expensive than the same varieties sold in other seasons. 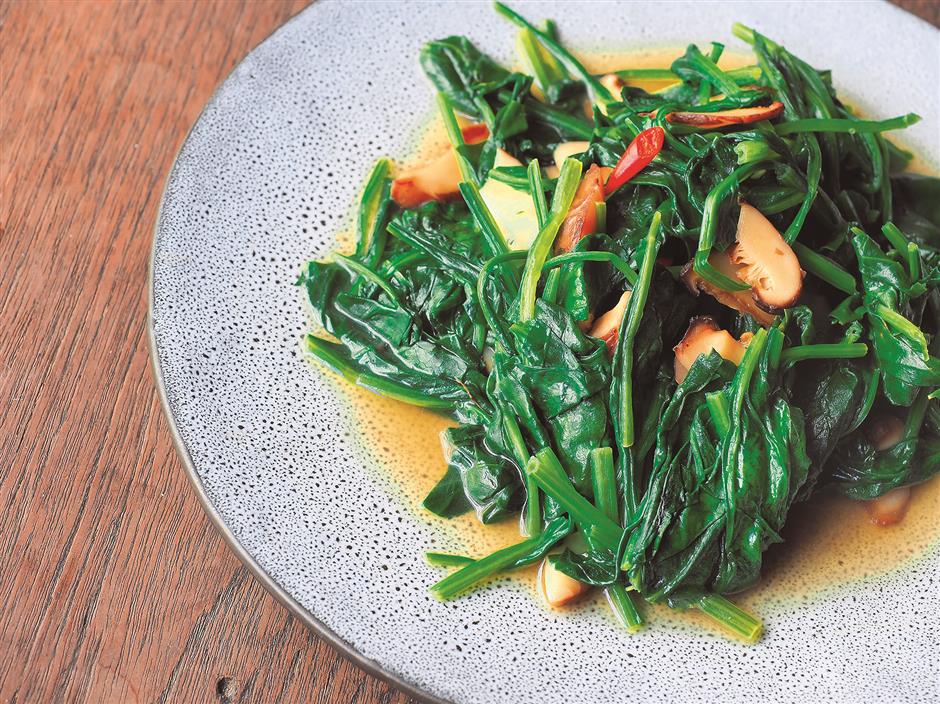 And frost doesn't just have a positive effect on green, leafy vegetables. Radishes graced by frost also become sweeter and crunchier. A record in agricultural literature from the Han Dynasty (206 BC-AD220) called the "Book of Fan Sheng" opined that radishes should only be harvested after they've been frosted, otherwise the taste will be astringent and spicy.

The ideal time to harvest radishes is between periods of frost and snow, as they can freeze when it's too cold. Harvested radishes are usually stored in cellars.

Shepherd's purse, or jicai, is a mustard green that's very popular in the Yangtze River Delta region. It's usually available in winter and spring, and mostly chopped up and mixed in fillings to make huntun, dumplings and spring rolls.

Shepherd's purse is very leafy with a thin stalk, and along with fillings, it makes a nutritious, delicious soup when boiled with tender tofu and seasoned with salt and white pepper.

Shepherd's purse and egg stir-fry is also a popular recipe. Because the vegetable itself doesn't pack a distinctive taste, the combination can be used to make pancakes for breakfast.

It can be preserved and used in fillings and soup by simply rinsing and poaching it in boiling water for a few seconds, then squeezing out the water and frost. 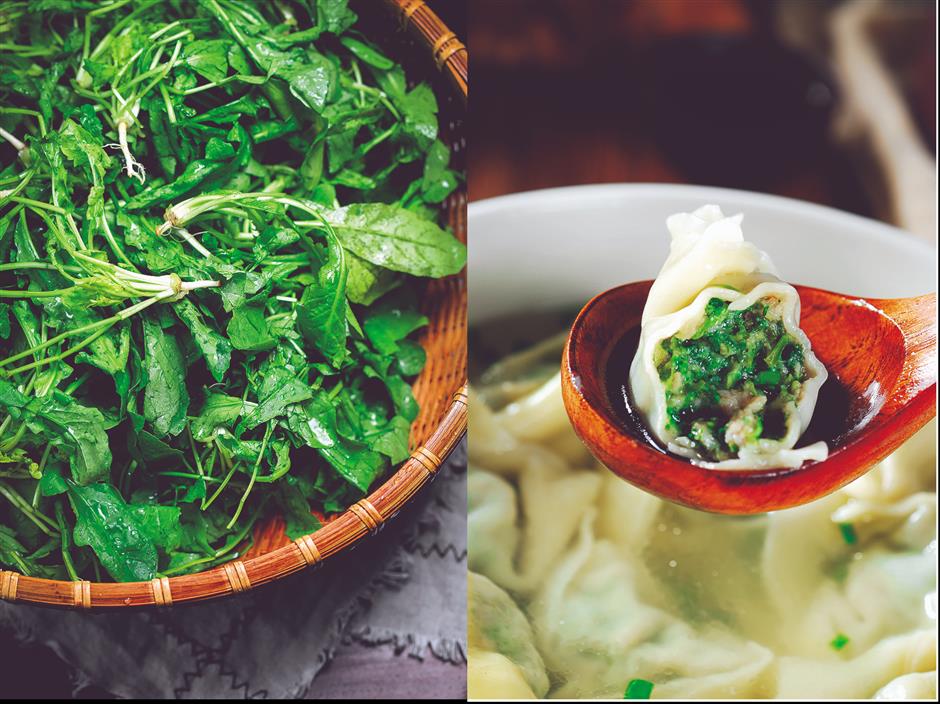 Fanxinhuang, yellow-hearted Chinese cabbage, is a variety with short white stalks and leaves that are green on the outside layers and yellow at the core. It's a delightful vegetable in the fall and winter, as it's slightly sweeter than common Chinese cabbage with a more tender texture.

Fanxinhuang is ideal as a stir-fry without adding other ingredients, or it can be stewed with pork and fentiao (noodles made with sweet potato starch) to complete a nutritious one-pot dish that goes perfectly with rice or steamed buns.

Broccoli is also in season, packed with nutrients and especially popular with people on healthy diets. A member of the cabbage family, it can be stir-fried with minced garlic or steamed to serve with a light dressing.

Broccoli stems aren't as tasty as the florets, and they are also harder to cook. One trick is to make broccoli stems into a salad by cooking them in boiling water and adding dressing. They can also be pickled for a few hours in the refrigerator as a side dish to serve with congee. 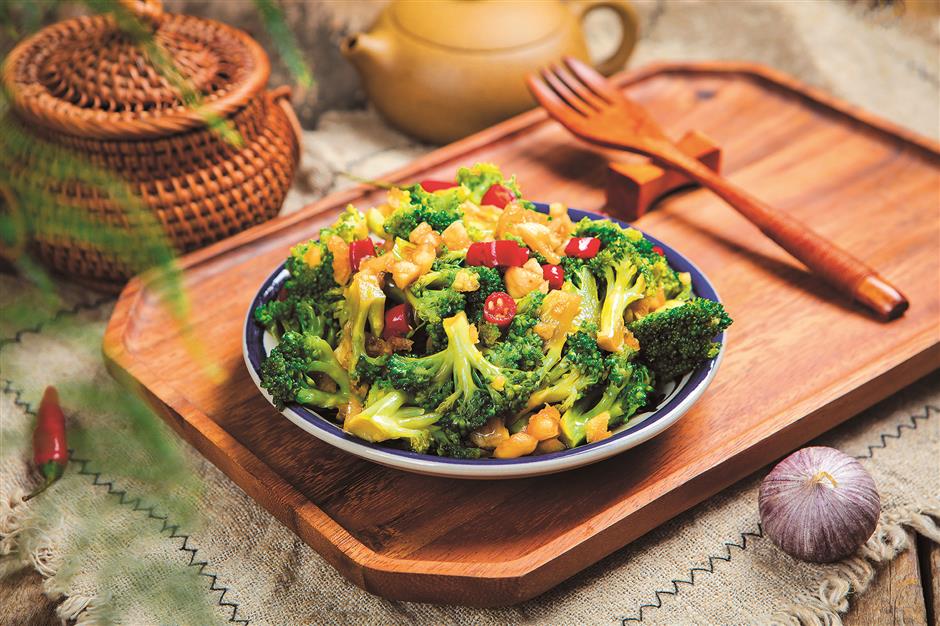 Broccoli is a popular winter vegetable.

some chopped scallions and salt

2. Thoroughly rinse the bok choy and pay attention to the dirt near the end of the stalks, then break it apart and poach in water briefly so that the color becomes vibrant green.

3. Add oil to the wok, stir-fry the minced garlic and chopped scallions to release the fragrance, then add the cooked shiitake mushrooms and bok choy. 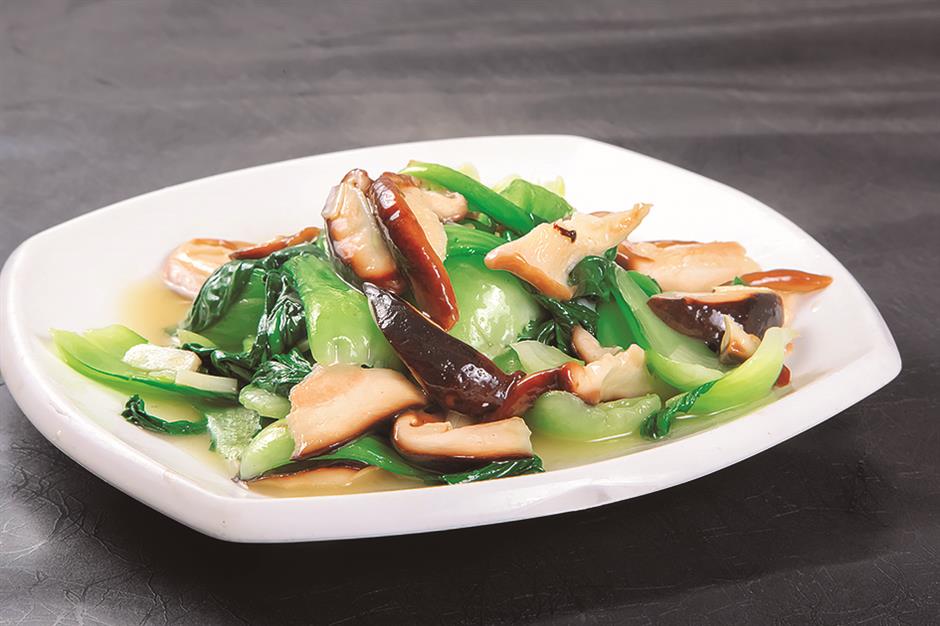 A specialty dish in Hubei cuisine, this simple stir-fry is extra rich and perfect for accompanying a bowl of steamed rice during winter.

cured pork with both fatty and lean meat: 100 grams

1. Thoroughly rinse the surface of the cured pork and steam to cook the meat with a little bit of ginger shreds and cooking wine, then slice it thinly and separate the fatty and lean parts.

2. Mince the garlic and a small piece of ginger, rinse the red Chinese kale and remove the hard ends of the stalks, then cut the vegetable into several segments.

3. Heat up some cooking oil in a wok, add the fatty pieces of cured meat and stir-fry with a drizzle of cooking wine until the fat comes out, then cook the lean pieces, take out the cooked cured meat and set aside.

4. In the same wok, add minced garlic and ginger, stir and cook until the aroma comes out.

5. Pour in red Chinese kale and stir-fry over high heat, add the cured meat back into the wok, and when the vegetable is cooked, season with salt and serve.