Sour-flavored pickles are always a delight to the taste buds, and Chinese sour-pickled cabbage has endless possibilities on the dinner table.

Chinese sour-pickled cabbage is known as suancai, or sour vegetable. It's one of the essential ingredients in several regional dishes, and the special sourness gained from fermentation excels in balancing rich stews.

It works wonders with a hot plate of fresh, handmade dumplings with Chinese sour cabbage and pork filling, or a sizzling wok of stewed pork ribs, snap beans and sour cabbage served with corn flour buns on the side. 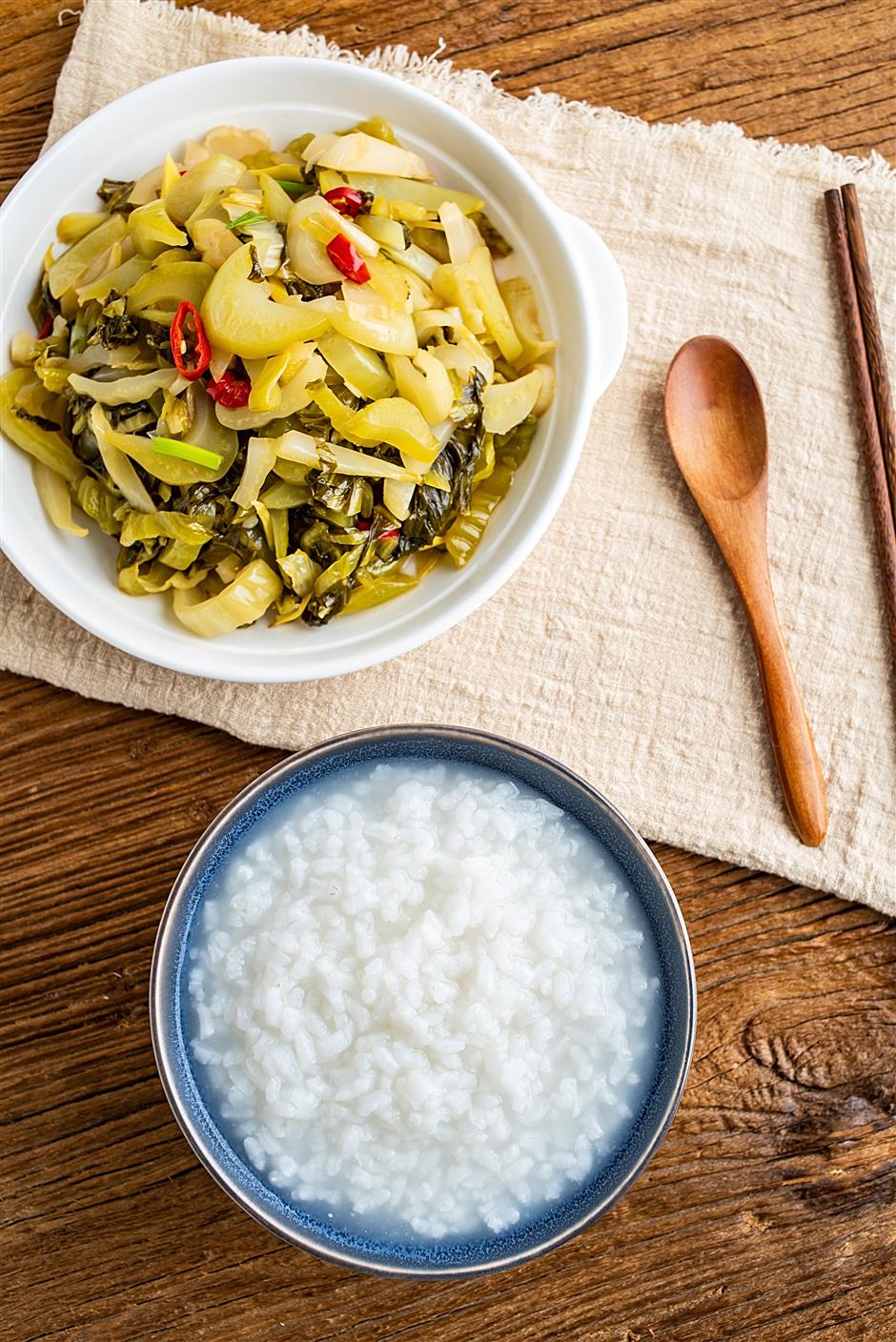 Although the best-known sour cabbage in the world is German sauerkraut, it didn't actually originate in Germany but in ancient China, dating back to the time when the Great Wall was built. Back then, sour cabbage was a staple for builders who lived on cabbage and rice during summer. Rice wine was added to preserve the vegetable in winter, in turn fermenting or souring the cabbage.

The technique was introduced to Europe by the Tartars. A big difference between Chinese sour cabbage and sauerkraut is that the latter is made of regular cabbage, while Chinese suancai is made of baicai, Chinese cabbage (or napa cabbage) with crunchier petioles and softer leaves that form the compact head.

Sour cabbage gets its unique flavor from the fermentation process rather than the vinegar used in making Chinese-style paocai (a fresher pickle made by soaking seasonal vegetables in a brine of salt, ginger, white vinegar, Sichuan peppercorns and more). When it's incorporated into different recipe, that delicate tartness is quite mild compared to the sourness from using vinegar.

It's also a relatively healthy "pickle," as sour cabbage is rich in Vitamin C, potassium and low in calories. 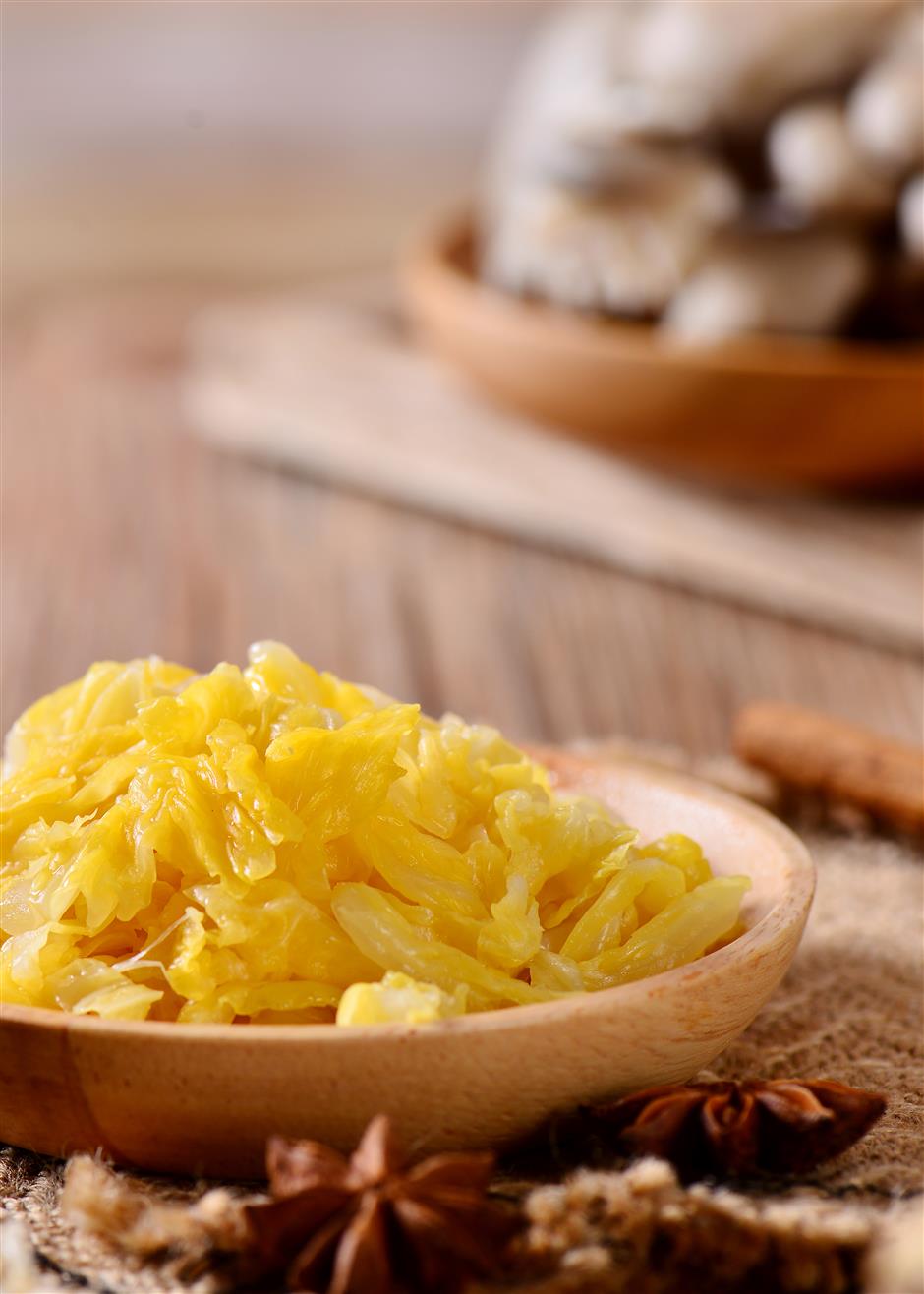 The region in three northeastern Chinese provinces, Heilongjiang, Jilin and Changchun, is known for using sour cabbage in its regional cuisine. It has a similar light flavor as sauerkraut, which is very crisp and refreshing.

Sour cabbage is made by simply using fresh Chinese cabbage and boiled water. The cabbage is placed in a completely dry large barrel, and boiling water is poured into the barrel until it covers all the cabbage heads. Simply seal the barrel and wait patiently for a month and half.

When the seal of the barrel is lifted, the fermented cabbage's aroma comes wafting out, and it's free of salt and any additives.

Chinese sour cabbage is usually eaten after being cooked rather than in its raw form, as additional seasonings and ingredients provide layers of flavors, and heat releases more of the fragrance and flavor.

The simplest way to enjoy northeastern-style Chinese sour cabbage is to stir-fry it with garlic, ginger, scallions and light soy sauce. This dish is bursting with flavor, and the oil makes the suancai more succulent. Just beware that suancai can easily soak up a lot of oil. 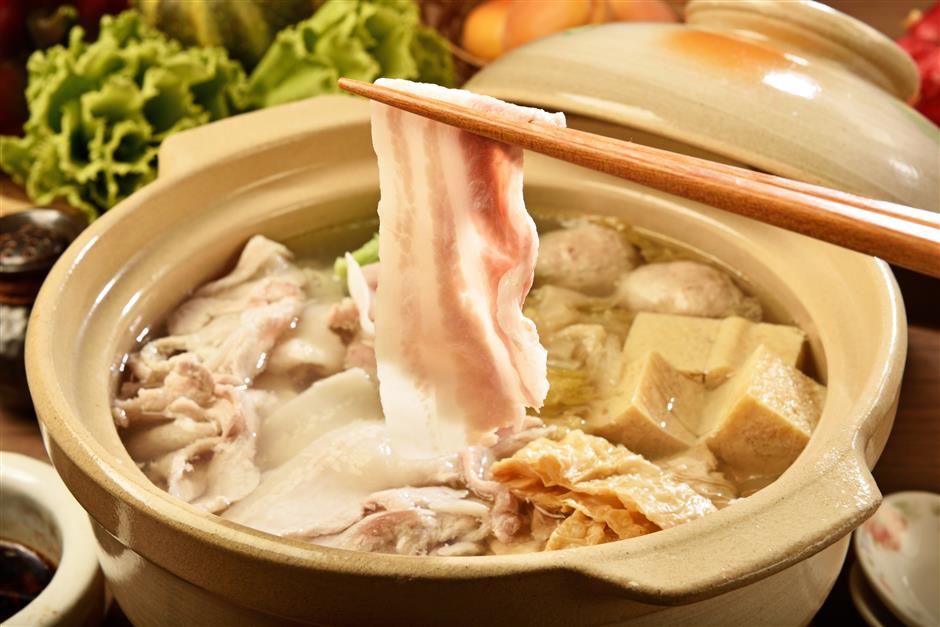 Sour cabbage stew is a wintertime favorite, not only because Chinese cabbage is the dominant vegetable in northeastern China, but also the stew's rich flavors are perfect for the season.

The stew has a few basic elements: Chinese sour cabbage, pork or tofu, and fentiao, a noodle made of sweet potato starch. Protein, vegetables and staple, the dish has it all.

A fancier sour cabbage stew uses more expensive pork short ribs, which take much longer to cook than slices or cubes of pork belly meat. The pork's fat content is essential in the stew, since it provides the richness and flavor to complement the sour cabbage. You can also make a vegan version of the dish by using hard tofu as the protein. It's best to lightly fry both sides of the tofu with oil before cooking it in the stew.

Sometimes fresh Chinese cabbage is stewed with sour cabbage, presenting a contrast of flavors and textures.

A grand version of the stew is shazhucai, or "pig butcher dish," which utilizes different parts of the pig and pig blood sausage, the flavor of which is balanced with the sour cabbage. 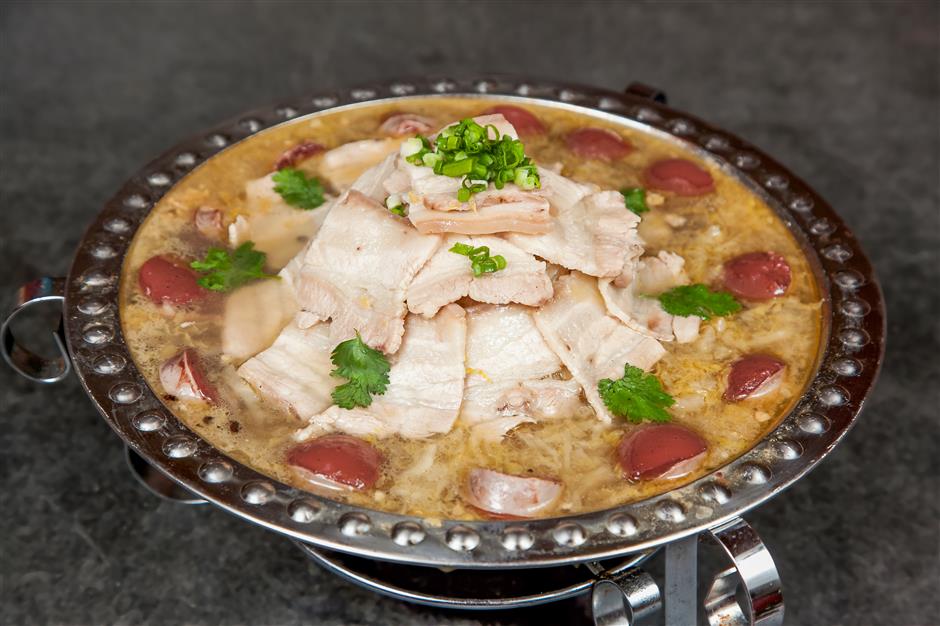 Northeastern-style sour cabbage can also be made into classic dumpling filling. The simple combination of pork mince and sour cabbage releases a bold flavor that's hard to resist.

Suancai in Sichuan and Chongqing is favored by people who like heavier tastes, as it adds spice to the sour flavors to create a more compound flavor profile.

Sichuan-style suancai is also darker in color since it's made of the meaty, larger-sized shepherd's purse (or other types of green vegetables). Its leaves are darker green compared to the yellow color of northeastern suancai, and salt is used to make it. 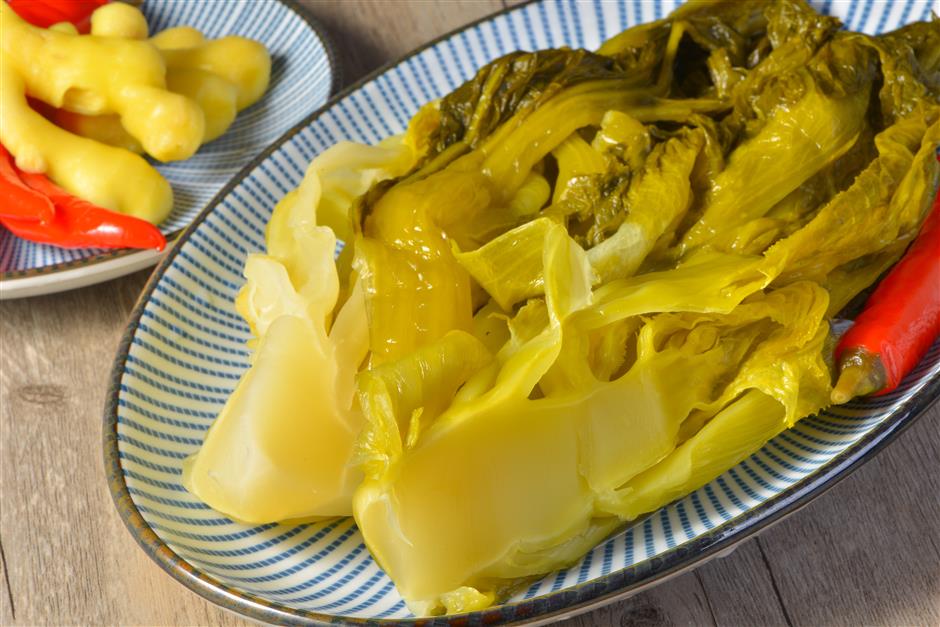 Suancaiyu, or fish boiled with Sichuan-style suancai and chili, is one of the most popular Chinese dishes enjoyed across the country. It incorporates freshwater fish that aren't too bony – like grass carp or snakehead fish – and makes a spicy, sour fish soup to use as broth to cook the tender fish before serving with a ladle of sizzling oil poured over spices for an elevation of flavors. Packaged suancaiyu condiments are also available, which saves the trouble of mixing the seasonings and buying the suancai.

Suancaiyu is an ideal dish to combat heat and humidity, and can also be transformed into a hotpot dish by cooking slices of fresh fish as well as various kinds of proteins, vegetables and staples in the rich and sour broth. The suancaiyu broth can also serve as a base for noodles.

The spicier Sichuan-style suancai makes delicious steamed buns, with no pork mince necessary since the flavor is already quite intense. 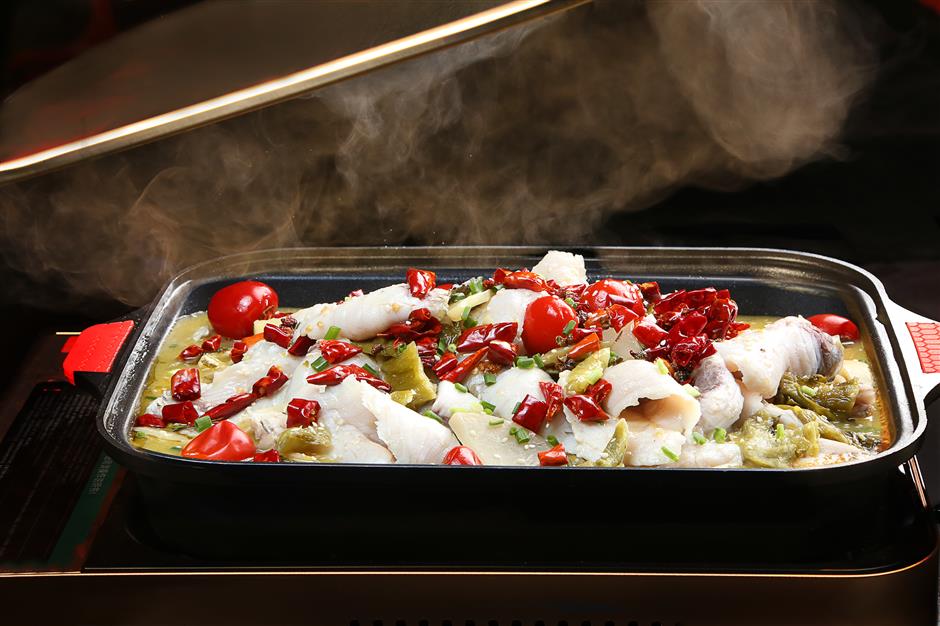 Spicy and sour suancaiyu can be transformed into a hotpot experience.

The perfect Chinese stew for winter that will definitely call for a second bowl of rice. You can make it vegan by switching the pork belly meat with hard tofu and take out the oyster sauce in the recipe.

1. Thoroughly rinse the pork belly meat, then put it in a small pot of cold water and add the cooking wine, bring to boil and cook the whole piece of pork belly meat for a few minutes to remove the bloody residue, then take out the meat and cut in smaller cubes.

3. Add oil in the wok and lightly fry the dried red chilis, star anises, bay leaves and Sichuan peppercorns. When the aroma of the spices is released, add in the pork belly meat, ginger, garlic and scallions and stir for several minutes until some of the fat from the meat comes out. Then pour in the chopped Chinese sour cabbage and season with light soy sauce, dark soy sauce and oyster sauce. Stir for about five minutes.

4. Add enough water into the wok to cover the pork belly meat and cabbage, add the fentiao and stew over high heat until the majority of the water is reduced into a thicker sauce. If you prefer to have more sauce to mix with the rice, cook for shorter time.

5. Salt to taste and serve with steaming hot rice. 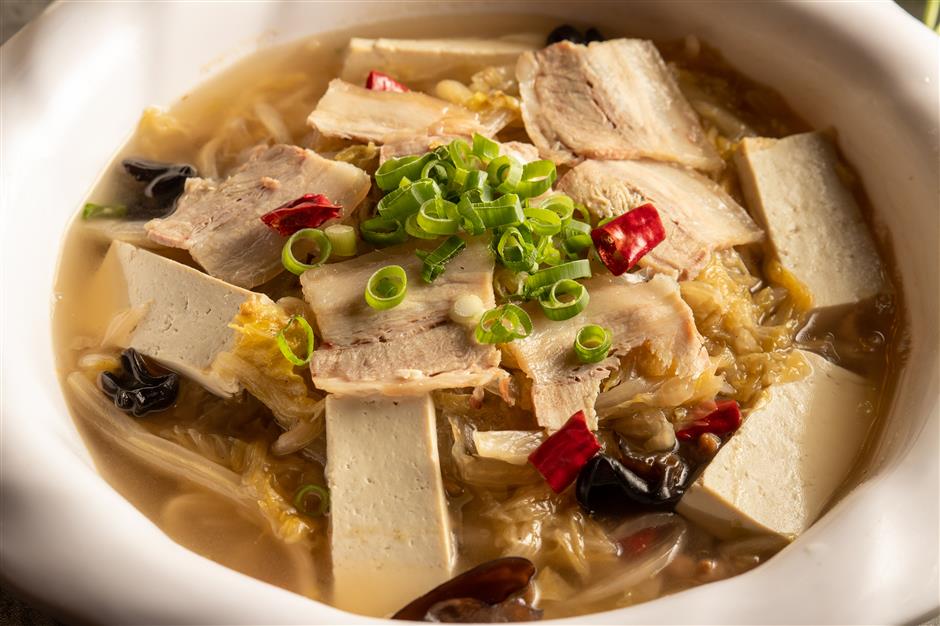 The ultimate spicy and sour fish dish that brings excitement to the taste buds.

Pickled small chilies, about a dozen

1. Prepare the grass carp: slice off two large pieces of fish fillet and then slice thinly in tilted motion following the fish bones so the meat doesn't break apart easily during cooking. Cut the fish bones into large chunks. You can also ask the fish vendors to slice the fish.

2. In a bowl, marinate the fish bones, tail and head with salt, cooking wine and white pepper, and in another bowl, mix the slices of fish meat with slat, white pepper and egg whites, a trick to preserve the tender texture of the fish.

3. After marinating the fish bones, tail and head for about 20 minutes, pour oil into the wok and lightly fry them until the color turns golden yellow, take them out and set aside.

4. Add half of the ginger and garlic paste into the wok and stir to release the flavors, pour in the chopped suancai and pickled small chilies, stir well, bring back the fish bones, tail and head, add a large amount of water and a few tablespoons of cooking wine, cover the wok with a lid and let it boil to make the broth for the suancaiyu.

5. After simmering the broth for 20 minutes, season with salt, take out the suancai and fish bones, tail and head and place them in a large serving bowl. Bring the pot of fish soup to boil and then add in the fish slices. Stir quickly with chopsticks to separate the slices. As soon as the edges of the fish slices turn white, turn off the heat, take out the fish meat and place in a bowl.

6. Bring the broth to boil once again and then pour a moderate amount into the bowl, top with cilantro and the rest of the ginger and garlic paste.

7. Heat up a large ladle of oil and lightly fry the peppercorns and red chilies briefly (about 10 seconds), pour it over the bowl of fish evenly and serve while the dish sizzles. 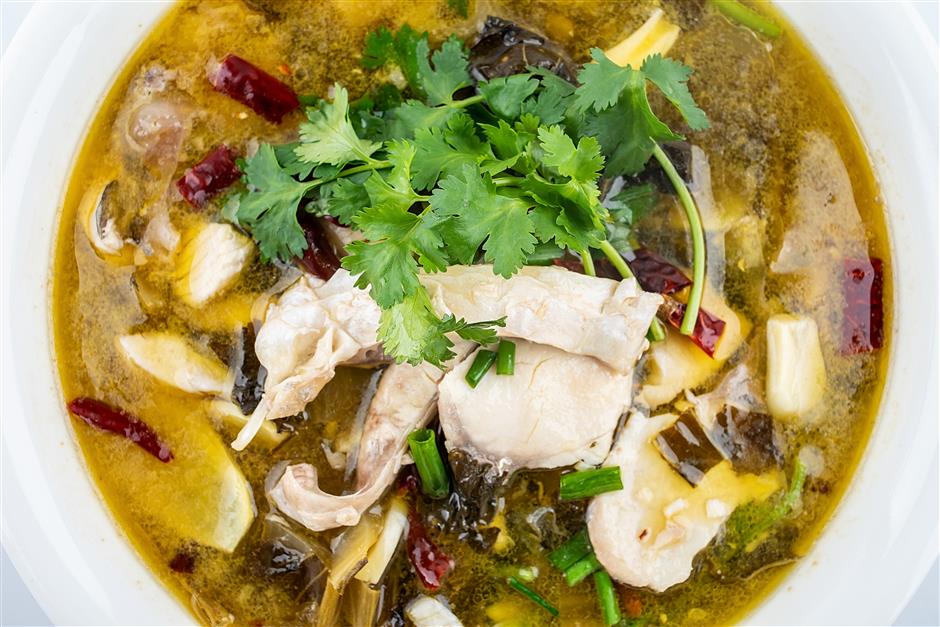